Tales of gladiatorial combat have enthralled for thousands of years. From books and paintings to films and television shows, the image of a gladiator with a sword and shield fighting for their life has intrigued and inspired many. However, as the fighting became more popular, the crowd wanted more. Gladiator battles became diverse, and a sword and shield were not quite enough. Here are ten different types of fighters specializing in a diverse array of weapons and novelties. 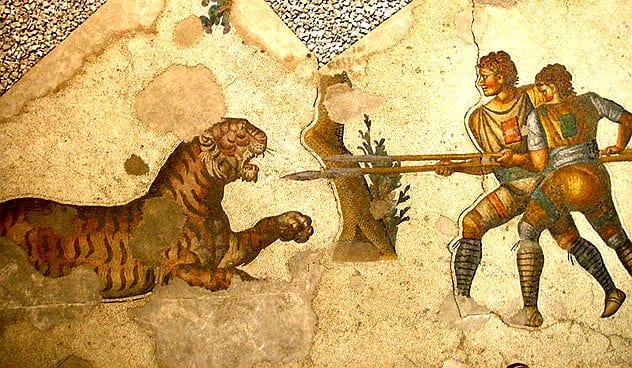 Unlike other gladiators, the bestiarii were combatants who fought animals and not humans. Roman emperors and senators used exotic and powerful animals (for example lions, tigers, elephants, and bears) imported from Africa or Asia to show off their wealth, and put on a spectacle for the crowds at the Colosseum and amphitheaters. Some animals such as elephants were captured to shock and entertain the crowds with creatures they would not have seen before. Other animals were there to hunt and be hunted.

There were two main types of bestiarii: the “damnatio ad bestias” (damned to the beast) and the “venatio” (hunter). The damnatio were those sentenced to death, thrown into the ring for a humiliating and vicious exit to the after-life. Not considered gladiators—they were the lowest class of people in ancient Rome—their death was to entertain the crowd and a single beast could kill hundreds at a time.

The venatio trained and hunted animals for the crowd as part of their performance. There are very few known venatio that have been recorded by historians and chroniclers because they were looked down on compared to other gladiators. The most famous example is Carpophorus who is said to have killed over 20 animals with his bare hands at the Circus Maximus. Also, rather befitting of the time, he trained animals to kill, hunt, and even rape victims.

Several emperors showed off their skill at killing animals as a bestiarii, although, rather than impress the crowds, it actually damaged their popularity. Nero fought animals at the Arena, whilst Commodus heroically fought injured and immobile animals from a safe, raised platform, much to the disgust of the senate.

The noxii were the lowest of the low in Roman society. By far the lowest class of civilians, they were those deemed so offensive to Roman society that they were not even classed as people. These types of people included (in no particular order) Christians, Jews, those who deserted the army, murderers, and traitors. They were not selected for gladiator school, and their appearance in the arenas was purely to die in the goriest way possible as punishment for their crimes.

There were several ways that the noxii could die. One was as part of a bestiarii conflict with beasts, where they would be ripped apart by the animals. Another would have the fighters blindfolded and given instructions by the crowd, like a sadistic blind man’s bluff. Others would be thrown to actual gladiators to be hunted down. Often naked or possibly wearing a loin cloth, the noxii had no armor, and any weapon would be a simple gladius (short sword) or stick.

The Romans took delight in killing the noxii. It served as a reminder to the civilians of the rule of law and order, and also of their place in the social hierarchy. 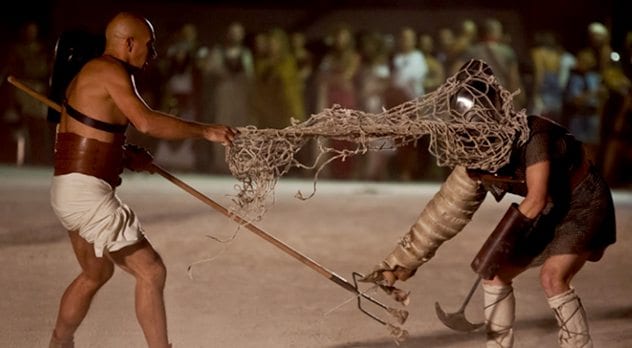 Which is better, speed or power? Death by a thousand cuts or one thrust? In the Roman times, the answer was definitely the more power and armor, the better. This is why the retiarius was initially looked down upon as a lower type of gladiator; they had very little armor and had to fight using agility, speed, and cunning. To make up for it though, they had a net to ensnare, a trident that was used to jab and move, and as a last resort, a small dagger that, on some occasions, was four-pronged.

The retiarius would train in a different barrack to the “sword and shield” gladiators and often had worse conditions. They were seen as feminine to others and were mocked. The satirist and poet Juvenal told the story of the minor aristocrat Gracchus, who not only caused disgrace by becoming a gladiator, but he brought further shame to society by fighting as a retiarius.

Despite this, they did gain some favor over the centuries, and became a mainstay in the arena, complementing the different styles of the armed secutores, murmillos, and scissores (a gladiator with a sword that has two blades). 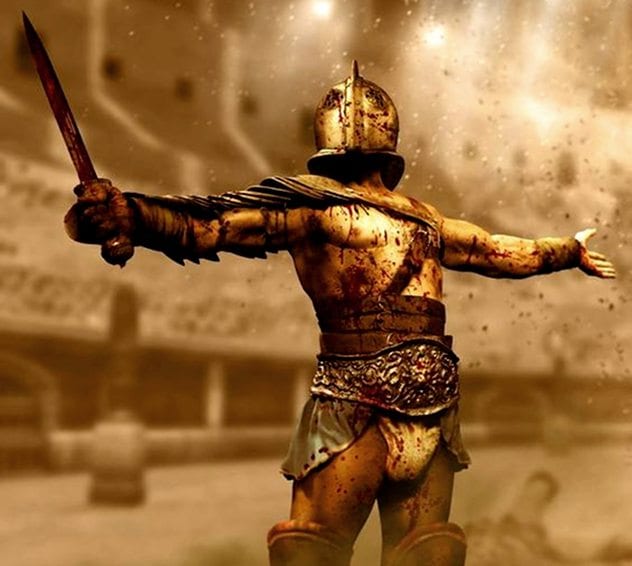 Remember the classic arcade game Donkey Kong? If not, in every level of Donkey Kong the character Mario would have to scale buildings to confront the villainous Kong. Now replace Donkey Kong with a retiarius. Mario would be a secutor whose job it was to chase and defeat the retiarius. A secutor was dressed in heavy armor: he had a large shield, sword, and a round helmet that covered his whole face except for two tiny eye holes. They were developed as a counterpart to the increasingly popular retiarius (net throwers) in a clash of styles.

A typical contest between a secutor and retiarius would begin with the retiarius a safe distance away—in some cases on a raised platform above water—with a stockpile of rocks ready to throw. A secutor (meaning chaser in Latin) would pursue the retiarius and try to avoid being captured in the net or hit by the rocks. They would also have to avoid the retiarius’s trident which was used to keep the secutor far away. The secutor had the advantage of being heavily armed but would also tire easily under the weight of his armor. It led to a gripping contest.

The Emperor Commodus fought as a secutor during the games, and heavily weighted the odds in his favor to ensure that he would win his contests. Another famous secutor was Flamma, a Syrian fighter who fought wearing an outfit from the territory of Gaul. He fought 34 times with a win/draw/loss record of 21-9-4. Amazingly, he was offered his freedom four times and refused each opportunity. 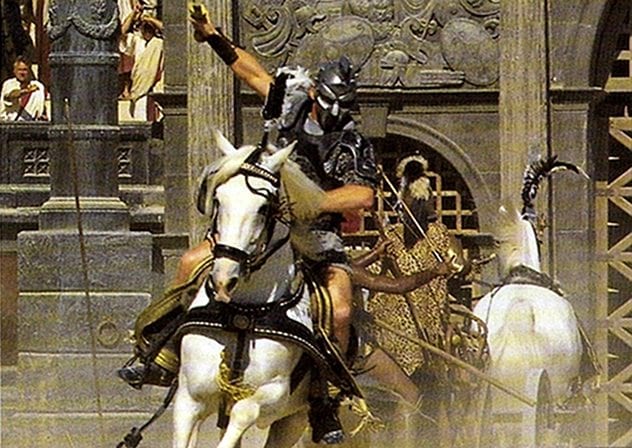 Despite sharing some similarities, the equites gladiators should not be confused with the Roman cavalrymen of the same name. The Roman cavalrymen were often minor aristocrats, holding trusted positions in the senate, and could even become emperor. The gladiatorial equites were glorified showmen.

Because the potential of death was not enough, the Colosseum would generally start with an equites bout to liven the crowd up due to the displays of agility and speed that they showed. Beginning on horseback, they would attack each other with their lances, and then dismount to fight with a short sword and shield. They wore light armor to improve their nimbleness and athleticism. 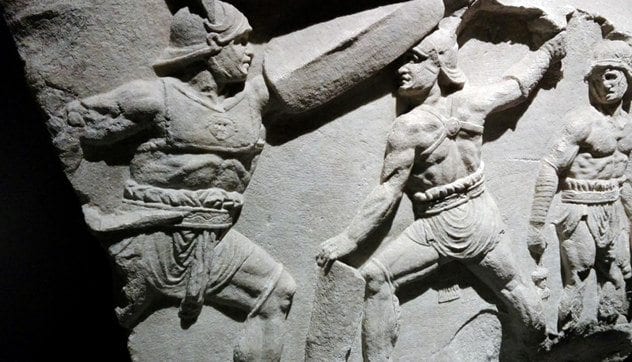 As we now know, many of the contests pitched different types of gladiators against each other. A provocator, however, would only fight other provocators. The reason for this is because they challenged each other to fight, rather than have the match selected for them. They would fight to settle feuds between rival gladiator schools, for the sheer competition of it, or to enhance their own status by beating a well-regarded rival. To reflect the equality, each provocator was armed in the legionnaire (Roman soldier) style with large rectangular shields, a breastplate, and helmet. The heavy armor meant that they tired quickly and it was difficult to injure them. 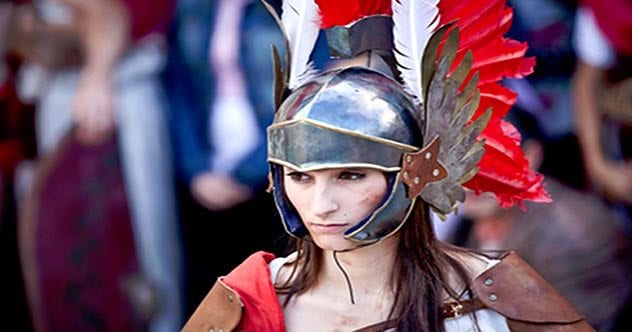 The debate about whether females should take part in combat sports is not new. Thousands of years ago, philosophers, historians, and senators such as Cassius Dio and Juvenal discussed the merits of females taking part in combat at the Colosseum. A gladiatrix would wear very little armor, be bare chested, and in many cases, not even wear a helmet in order to show off her gender. Armed with a short sword and possibly a shield, these fights were very infrequent and seen as a novelty. As well as fighting each other, to increase the indignation, they also caused shock and outrage by fighting dwarfs.

In a rather extreme case of the aristocrat throwing off her corset and slumming it with the manual workers, many gladiatrices came from a higher status in society, a contrast to the low-born or slave gladiators. Their appearance caused such scandal that they were eventually banned in A.D. 200. 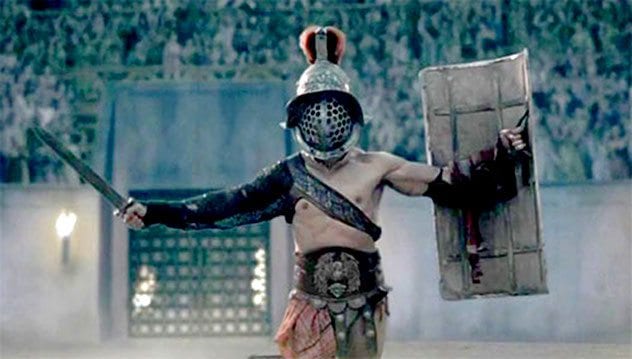 The Gallus were some of the earliest gladiators that came from the Gaul tribe of central and western Europe. They began fighting after being captured as prisoners of war. Heavily armed, they looked like the stereotypical gladiator with a longsword, shield, and a helmet, but they wore the traditional Gaul style of dress. Less agile than other types of gladiator, the Gallus relied on power and brute force to attack their opponents. They often fought prisoners from rival tribes.

Once the Gauls made peace and became part of the Roman Empire, it was seen as distasteful to force an ally to fight for their entertainment, so they adapted into another type of gladiator called the murmillo. Still using the heavy sword and shield, the murmillo dressed closer to a Roman soldier and fought other murmillones, gladiators from rival regions, and the net throwing Retiarii.

A famous murmillo was Marcus Attilius, who, in his maiden fight, managed to beat a gladiator from Nero’s own troops, Hilarus (who had a 12-2 win/loss record). Attilius then followed it up with a victory over the 13-0 Lucius Felix. Not bad for a rookie. 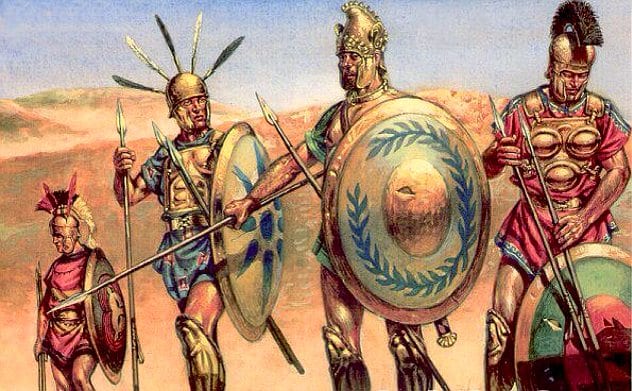 The Samnite were another of the early gladiators, and they share many similarities with the Gallus. They were also originally prisoners of war but hailed from the Samnium region of southern Italy. When the Roman’s conquered, they forced the Samnites into staging mock ceremonial battles. Popular, this eventually evolved into gladiator contests where the Samnite would wear their traditional military outfit with a large rectangular shield and sword.

They fought other soldiers who had been captured from tribes that were feuding with Rome. Forced to compete in their respective military styles, this offered a unique chance to see rival clans battle. Eventually, they fought opponents that were dressed as Roman legionnaires to depict Rome’s triumph over the tribes (which hopefully the Roman’s would win or else it would have been pretty embarrassing).

When Samnium became absorbed as a province of Rome, they no longer fought as a distinct category but developed into the hoplomanchus or murmillo gladiators, who had similar weapons and dress. 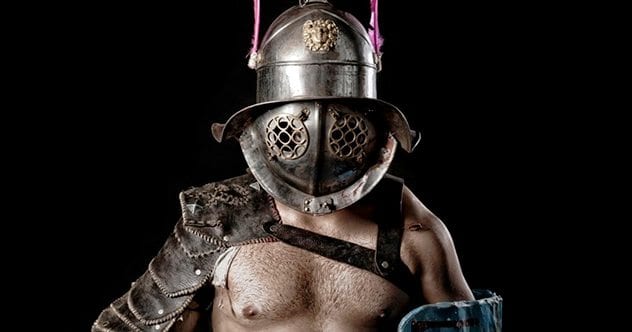 The most popular and well-known gladiator is Spartacus (other than Russell Crowe maybe). Spartacus was a prisoner of war from the Thracian tribe of southeastern Europe (around modern-day Bulgaria). He rebelled against his enslavers who had trained him as a gladiator and forced him into combat. After leading his fellow slaves and amassing an army of over 70,000 rebels through several battles with the Romans, he was eventually defeated although his legend lives on today.

Sporting a round shield, curved blade, and a broad helmet with a griffin emblem, the Thracians were arguably the most popular and common of the early gladiators. They would frequently fight the Gallus and Samnites.

In the same way we support sports teams, emperors and senators had their own favorite types of gladiators. Caligula, in particular, supported the Thracians and even killed another gladiator who had defeated his favorite Thracian warrior. Caligula trained to fight as a Thracian when he fought at the Colosseum, and this allowed any close decisions to swing favorably to the Thracians. Another emperor Domitian had such contempt for Thracians that he once threw a spectator to the dogs. The spectator’s crime—he suggested a Thracian may win a fight.

A former editor, now I just write for fun!