A history as old as China’s is a smorgasbord for archaeologists. The ancient culture continues to reveal long-hidden layers, adding to an already complex past. The latest from this vast country covers a remarkable trove, from revealing missing links to what games the nobility played to how the climate brought death to dynasties. Even more intriguing are the new mysteries and legends proving to be true. 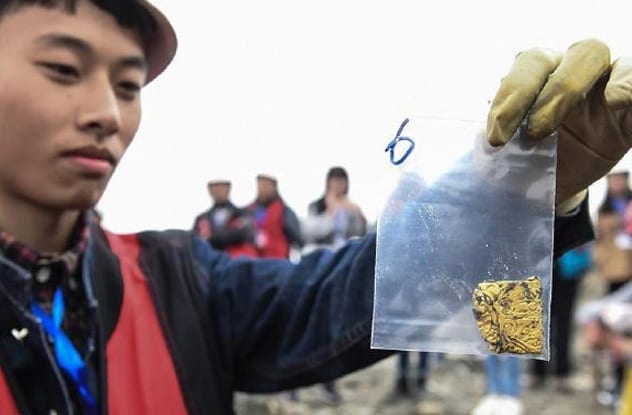 A river in China is said to be strewn with treasure. The legend goes that during a peasant revolt, their leader led a 100-boat convoy down the Minjiang River. The gold-carrying ships were ambushed on their way south in the modern Sichuan Province. During the battle, the precious cargo sunk to the bottom and away into the world of myths. It took centuries and surprised construction workers to prove that the story was real.[1]

In 2005, a crew was working on the banks where the Minjiang and Jinjiang rivers meet and came upon seven ingots of silver stuck in the gravel. Archaeologists used pumps and retaining walls to cordon off and drain part of the Minjiang. This one area, measuring some 10,000 square meters, yielded a vast amount of valuables. Over 10,000 artifacts of gold and silver were found, including ingots, jewelry, and coins. Bronze items and weapons were also among the legendary hoard. Experts could date many of the artifacts to when the fight was said to have occurred, sometime between 1368–1644.

When found in 2007 and 2014 respectively, two skulls created a buzz. Both were extracted from China’s Lingjing site in the Henan province. They belonged to the same strange species: a modern human with Neanderthal features.[2]

Similar to people today, the pair owned reduced brow lines, slight cranial vaults, and big brains. However, semicircular ear canals and a thicker skull at the back were Neanderthal. Additionally, the low broad brain case was a trait of early eastern Eurasian humans.

Scientists involved in the study feel it’s an unknown human branch, but others suggest these are the first Denisovan skulls. Related to Neanderthals, all that’s ever been found of them is a finger bone and teeth. Living Chinese also have 0.1 percent Denisovan DNA. The Lingjing skulls are too ancient to yield the DNA sample that can solved this mystery. Aged 105,000–125,000 years old, they do provide an opportunity to study human evolution in eastern Eurasia. It’s likely that an unidentified archaic group lived alongside Neanderthals and modern humans, interbred, and passed down a mixed heritage for generations. 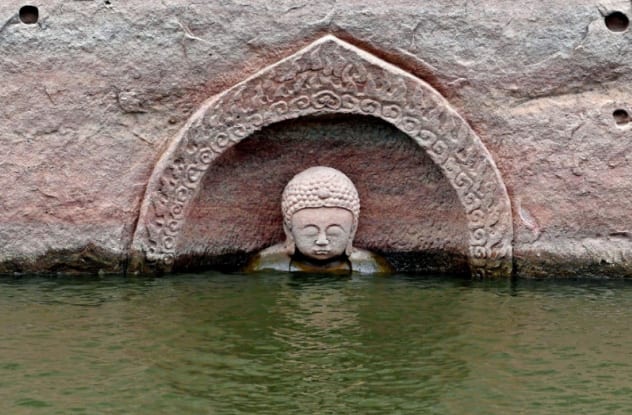 In 2016, a renovation project began at the Hongmen dam in Nancheng County. The first step was to lower the water level. By the time it was down by 10 meters, villagers noticed the unmistakable face of a Buddha emerging. Closer investigation revealed it had been carved from the cliff face, and the head was only the visible tip of a complete statue that stood 3.8 meters high.

The Buddha’s carving style places it in the Ming Dynasty (1368–1644) or earlier. Also found were inscriptions and the floor of a large room covering 165 square meters. Considering the sacred figure nearby, the floor was likely all that remained of a temple, and local historic records soon confirmed the theory.[3]

There was once an ancient town, Xiaoshi, which was the trading hub between the provinces of Jiangxi and Fujian. The local temple stood at the intersection of two rivers, meant to safeguard sailors from dangerous currents. The statue and Xiaoshi’s ruins became submerged and forgotten when the reservoir was constructed around them and flooded. 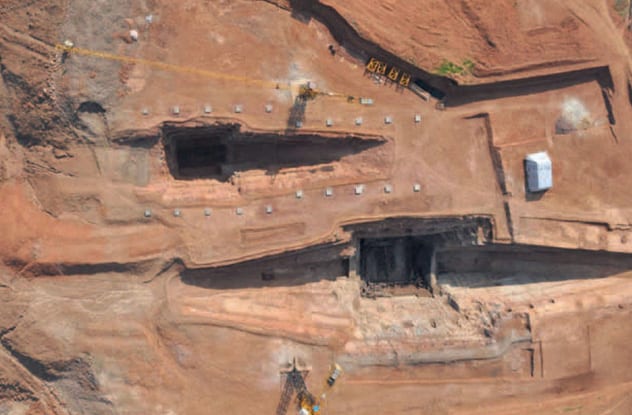 Several wealthy kings served under China’s emperor in the second century BC.

The elaborate resting place of King Liu Fei was recently opened. The arrogant royal once ruled the Jiangdu kingdom (modern-day Xuyi County) and had a luxurious lifestyle until he died in 128 BC. The crypt had been plundered but remained an archaeological wonderland. Excavations running from 2009–2011 listed over 10,000 artifacts from three main tombs, 11 attendant graves, weaponry, and horse-and-chariot pits. The king’s chamber consisted of smaller rooms connected by corridors and came with a stocked kitchen, coin-filled treasury, musical instruments, model chariots, and a wide variety of weapons.

Unfortunately, Liu Fei’s exquisite jade coffins were badly damaged, and the king himself was missing.[4] Next door, archaeologists discovered the most important find of the dig. Amid treasures of lacquer and precious metals was the casket of an unidentified individual. In pristine condition, it remains the only jade coffin in Chinese archaeology to be found undamaged. Also, five normal-sized chariots and 50 additional miniature versions were retrieved from two more pits. 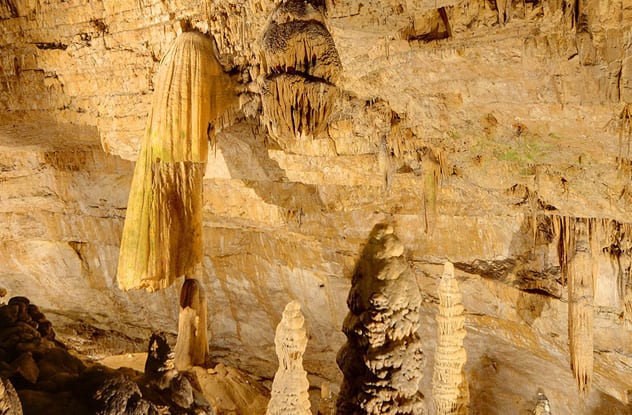 The Qinling Mountains in central China receives most of the summer rainfall. It provides regional rivers with water and a recent discovery revealed it was also an emergency reservoir during droughts. One cave received at least 70 visits over a period of 500 years.

The most scientifically important years connected with Dayu Cave came to light when wall inscriptions were found, detailing seven droughts between 1528–1894. The authors capture the desperation of the local communities, describing how hundreds would follow important individuals, such as a local mayor, fortuneteller, or district governor to collect water and pray for rain. To double check the historical texts, several stalagmites were analyzed, and their chemical composition confirmed that the given years had a lower rainfall. Interestingly, this is the first time that stalagmites and ancient records from the same site had ever been compared.

There is an old theory that climate change destabilized Chinese society enough times to contribute to the destruction of the Tang, Yuan, and Ming dynasties. Dayu Cave presents direct evidence to support this view.[5]

5A Game With No Rules 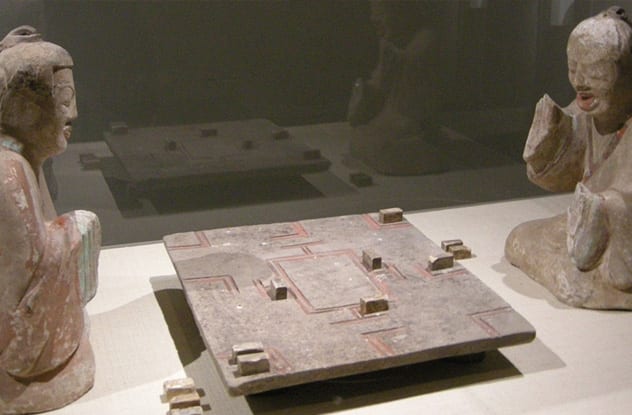 Nearby Qingzhou City lies a massive, elite tomb. A lot of its treasures were removed by looters over the course of its 2,300-year-old existence. The recurring waves of thieves were probably in no mood to play games because a rare entertainment set was left behind during each robbery.

When researchers entered the aristocratic grave in 2004, they recognized the items as possibly belonging to a game called “Bo” or “Liubo.” The playing board was a large tile. Upon discovery, it was in pieces, but once repaired, the surface showed images of stylized clouds and lightning. The center was decorated with a pair of eyes. Playing pieces included 21 tokens that were rectangular and numbered.

There was also a die with 14 sides. Crafted from an animal tooth, 12 sides carried an ancient form of Chinese writing—seal script—while the other two were blank. Bo stopped being popular over 1,500 years ago, and the rules vanished over time.[6] All that is known about Bo is that it was a two-person game of strategy where pieces were “kinged” and points accrued. 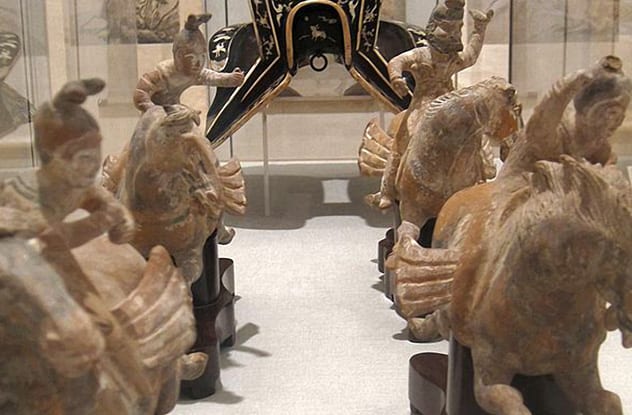 Conventional wisdom names Persia as the place where polo was born around 2,600 years ago. Now, archaeologists have come across polo sticks and balls that might give China that honor.[7]

The sport equipment was found in the Yanghai Tombs in the northwest and is 2,400–2,800 years old. Eight lengthy sticks have a similar design to those depicted in artwork of a much later era, the Tang Dynasty (618–907), although the first writings that mention polo appeared during the Han Dynasty (202 BC–AD 221). The three balls, sheepskin tightly packed with leather and wool, resemble others found in a Han tomb but, like the sticks, are also much older.

The Yanghai site included the mummified remains of those who practiced this equine tradition. The bodies belonged to a light-haired, fair-skinned people called the Subeixi. They were the first steppe tribe who abandoned the nomadic lifestyle that was the norm around 3,000 years ago, becoming herders and also helped to establish the famous Silk Road. Their most notable skill was horsemanship, so it’s no surprise they kept themselves sharp with polo matches. 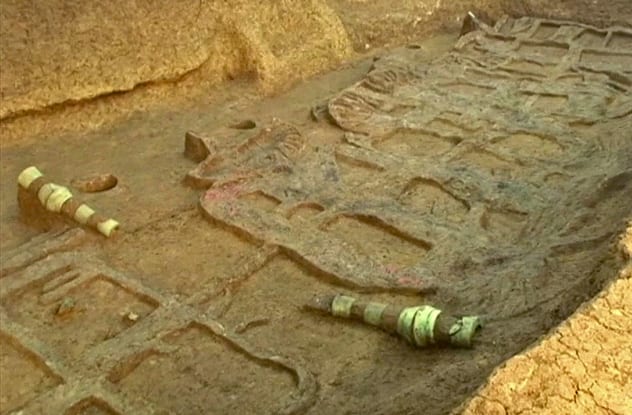 A mass grave of a different sort was unearthed in recent years. In Zaoyang city in Hubei Province, a piece of land produced vehicles, people, and animals. Thirty tombs belonged to members of the nobility who died between 770–476 BC. Separate from them was a massive pit. Inside were 28 wooden chariots arranged flat on their sides and densely stacked together. Five meters from the chariot corridor was another pit containing 98 horse skeletons. Both the chariots and horses were buried around 2,800 years ago, and the animals appeared to have been killed beforehand as there were no signs of resistance.

After death, the horses were buried in pairs, most likely because the chariots were the type pulled by two-horse teams.[8] Since the vehicles were the high-tech cars of the time and owned by the ruling class, the sheer number found were meant to demonstrate the high rank and power of the individuals buried there. Also discovered were musical instruments, among them the oldest bianzhong (bronze chimes set in a frame). 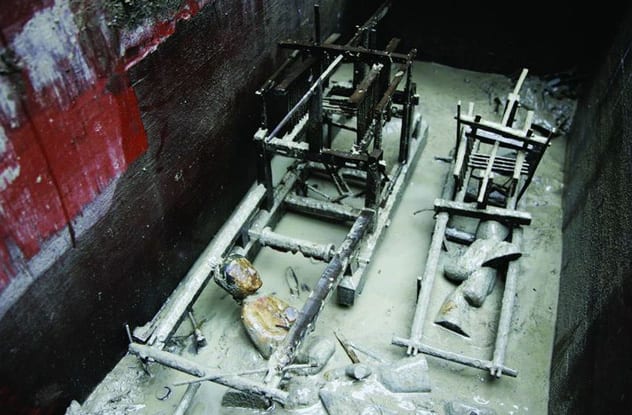 The Han Dynasty produced copious amounts of silk. Distributed throughout Eurasia and even the Roman Empire in the west, it wasn’t clear how weavers managed to keep up with the demand. In 2013, construction workers uncovered a five-chambered tomb from the second century BC. Located in the city of Chengdu, the crypt held a woman, aged around 50. Below the burial room were four compartments. One made weaving history.

Inside, were four looms. They were models of the real thing, one-sixth in scale. Carved weavers, around 10 inches high, were arranged around them performing tasks. Some wielded tools, while others worked the thread. A study determined that they were the earliest examples of pattern looms, complex machines capable of producing “programmed” patterns. This enabled the production of enough material for the Silk Road.[9]

The miniatures complete the story of China’s textile evolution. They fit snugly between more ancient equipment and the weaving machines that followed centuries later. Other parts of the world also benefited when the technologies spread and became a major influence on the West’s weaver community. 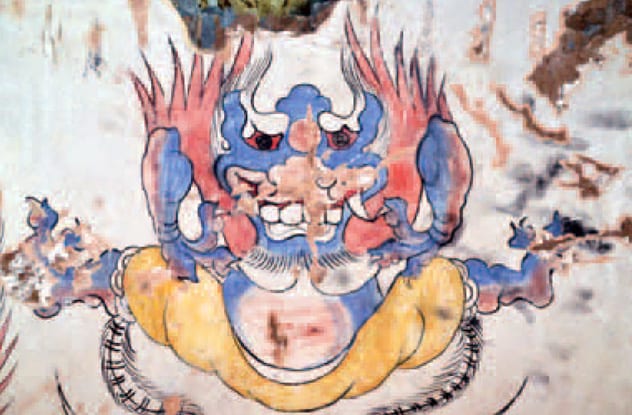 The spring of 2013 brought another remarkable tomb to the attention of archaeologists. Unfortunately, it had been gutted by looters shortly before discovery. The bodies were gone and the coffins all but destroyed.

A corridor leading to the burial chamber, however, still had some beautiful and intriguing murals intact, including a winged horse and ascension themes. Other imagery cannot be explained or had never been found before in tombs from the same period, dating around 1,400 years ago. What stumped experts is the “blue monster” that looks down from the corridor’s vaulted ceiling.

Nobody knows what the vividly colored creature represents or even what it is supposed to be. Another figure is at least a recognizable deity, called the master of wind.[10] However, for some inexplicable reason, he’s almost nude and running toward the tomb. On the flip side, other scenes were dead normal and showed horse trading, gatehouse duty, and hunting. The corridor allows researchers the valuable chance to study the beliefs, fashion, daily life as well as some new mysteries about ancient Chinese culture.