When we think of places of worship, we tend to imagine airy buildings designed to let the light of God flood in. Not everyone has followed this design aesthetic. In the ancient world, it was common for people to descend into the Earth to come closer to their gods. Even today, there are religious complexes throughout the world where you can pray, so long as you aren’t too claustrophobic. 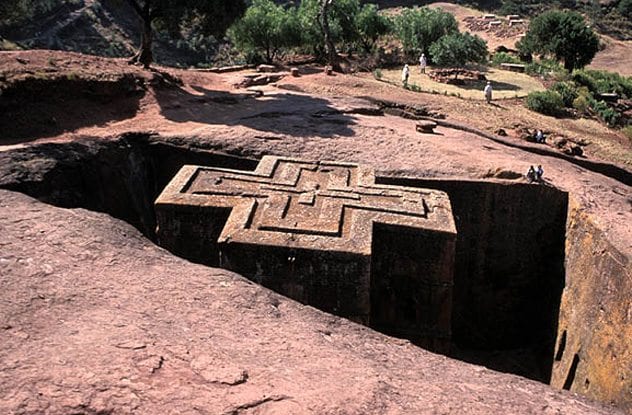 The usual, the easy, way of making a building is to pile components up until you have the structure you want. The other way is to start with bedrock and hack away everything until a building emerges. That is what the builders of the rock churches in Lalibela, Ethiopia, chose to do. Each of the churches is a single structure carved from the rock.

There are 11 monolithic churches in Lalibela, begun by King Lalibela in the 12th century. Muslim conquests in the Middle East made pilgrimages to the Holy Land dangerous for Ethiopia’s Christian community. Lalibela set out to create his own Jerusalem. In one of the churches can be found replicas of Adam’s tomb, Jesus’s tomb, and the crib of the Nativity. Legend has it that thousands of laborers worked during the day but construction was continued at night by angels.

The churches of Lalibela are still used for worship, but they are also part of a program to bring tourists to Ethiopia. 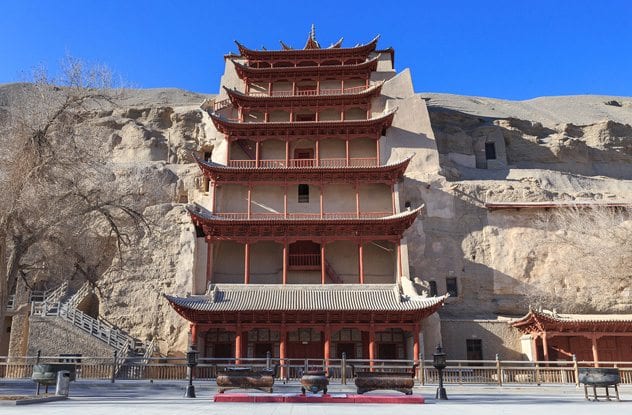 The Dunhuang oasis in China was once a major stop on the Silk Road, the overland trade route between Europe and China. A city grew up over the centuries. And where there are cities, there will be temples. For the Buddhists of Dunhuang, the earliest Buddhist community in China, they carved their temples into the nearby Mogao caves.

Begun in the fourth century, there are 492 richly decorated caves at Mogao. The walls are vividly painted with both religious and secular scenes and in a variety of styles that pay tribute to the mixture of peoples that met along the Silk Road. The Thousand-Buddha cave has walls entirely lined with miniature carvings of the Buddha. As well as Buddhist art, evidence has been found of Jewish, Christian, and Manichean influences.

In 1900, a cave, sealed for over 900 years, was opened at the site and proved to be packed with manuscripts. One of these documents proved to be the oldest printed book ever discovered. 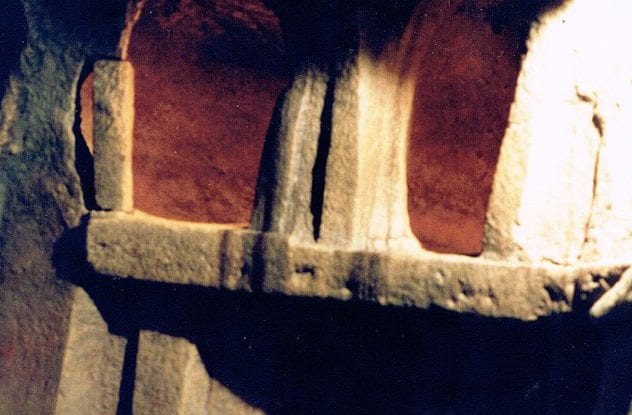 Imagine you decide to build an underground cemetery. You want it to last, so it has to be cut from the rock. Even today, with modern tools, that would be quite the undertaking. The builders of the Hal Saflieni Hypogeum did it in 4000 BC, so the only tools they had were stone, obsidian, and deer antler to carve out the structure.

A multilevel complex, the Hypogeum seems to have been modeled on the sort of temples that could be found aboveground. There are false windows and doors cut into the periphery. Strikingly, the roof is carved in the imitation of the wooden roof of a temple, which would otherwise be lost to us with time. Dead bodies seem to have been left in carved recesses to rot until only bones were left, at which time they were removed for burial. 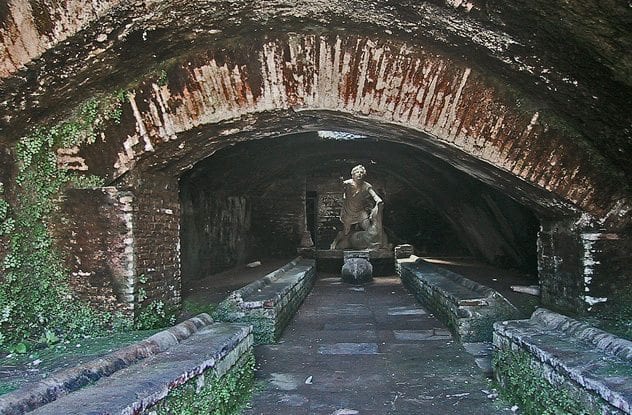 Roman Paganism was remarkably open to allowing worship of new and diverse gods. In the first century, it seems that Roman soldiers began to embrace the veneration of Mithras, an Eastern god. Little is known about the theology or religious practices of the followers of Mithras, but what have remained are their underground temples—known as Mithraea.

The Mithraeum under the Circus Maximus, the huge race course, in Rome is one of the best preserved. The temple includes a sculpted frieze that shows Mithras in the act of slaying a bull. Similar images have been found from across the Roman world. This suggests that worship of Mithras may have included the ritual sacrifice of a bull—tauroctony. 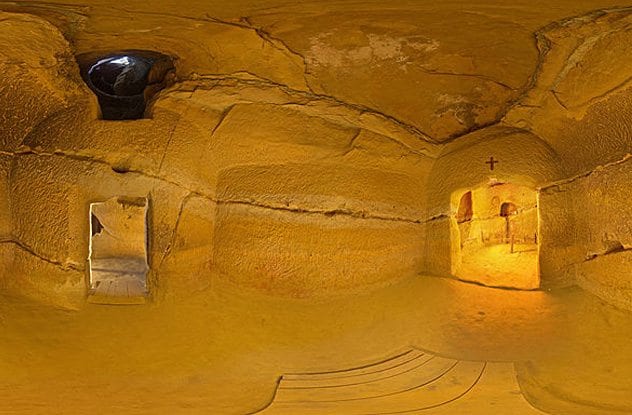 The underground complex at Sinca Veche is known by several names: Temple Cave, Monastery, and Temple of Destiny. Despite the research that has gone into the site, no one is quite sure how old it is, who built it, or why. There are nine separate rooms, two of which have been used as chapels, but the walls have non-Christian symbols. There is a Star of David and a Yin-Yang sign.

Research into traces left by tools used to carve some of the religious symbols has been revealing. The study of these atomic traces suggests that the temple was carved in the second century, though the original purpose is still open to speculation. 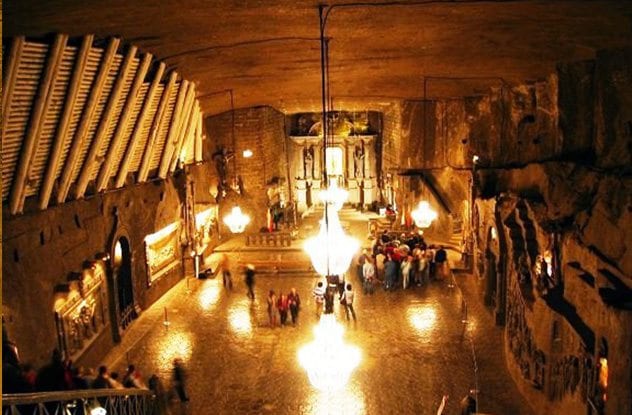 Mining has always been a dirty and dangerous business. In the 13th century, miners would need all the help they could get—it’s no wonder many of them sought help in prayer. At the Wieliczka salt mine in Poland the miners carved the shrines and chapels out of the salt. The rock salt at least has the benefit of being soft.

No one knows exactly how many of these places of worship once existed in the mine as they tended to be demolished as the mine was opened up. But there is now a spectacular church dedicated to St. Kinga. Legend has it that the saint dropped her engagement ring in Hungary. When she came with her husband into Poland, she had a premonition and ordered a well to be dug. Instead of water, they found salt. And in the middle of a block of crystal salt was her dropped ring. The site this supposedly occurred at was Wieliczka, where her underground chapel is now located. 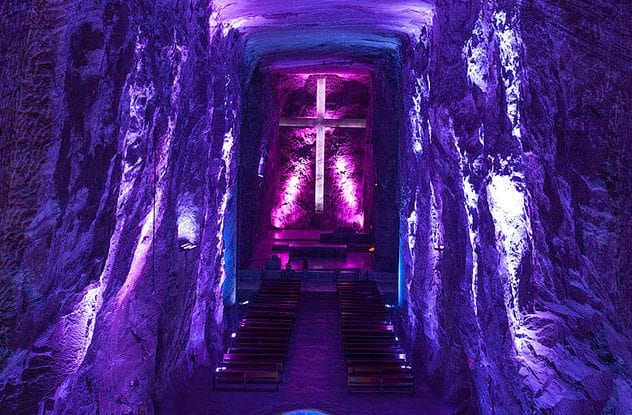 The mines at Zipaquira have been active since the fifth century BC. The cathedral hewn from the salt here, though, is much more modern. Smaller chapels existed in the mine, for similar reasons to those at Wieliczka, but in the 1990s, they were refurbished and expanded.

Now visitors to the mine can descend 500 feet into the earth and view the cathedral alongside the miners who still dig for salt there. There are 14 chapels, each with salt statues depicting a station of the cross, with the carvings and walls lit by LEDs that suffuse light into the salt. The site is a functioning church but is called a cathedral mainly to attract tourists. 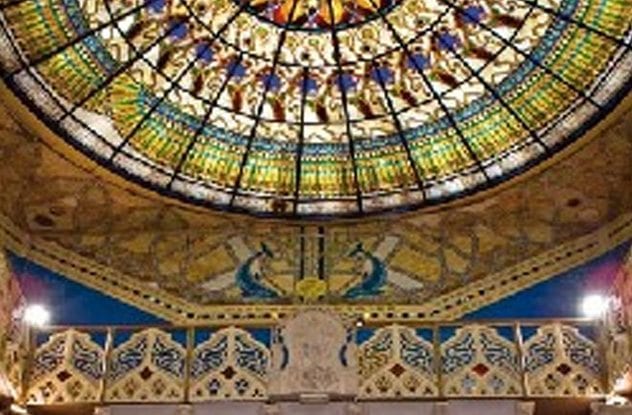 Damanhur is an ecovillage commune in the foothills of the Alps. There are similar sites all over the world. What most of those other communities lack is a Temple to Humanity.

The founder of Damanhur, Oberto Airaudi, began to have visions as a young child. He saw temples. As he grew up, he looked for a place in which to turn these visions into reality. Gathering others who shared his aims to him, he started construction of the underground temples in 1978. Since they kept their temples secret, without getting planning permission, when the authorities discovered them in the ’90s, work had to stop. They have since been allowed to continue. The Temples now contain a Hall of Mirrors, Hall of Metal, Halls of Spheres, and other areas used for meditation. 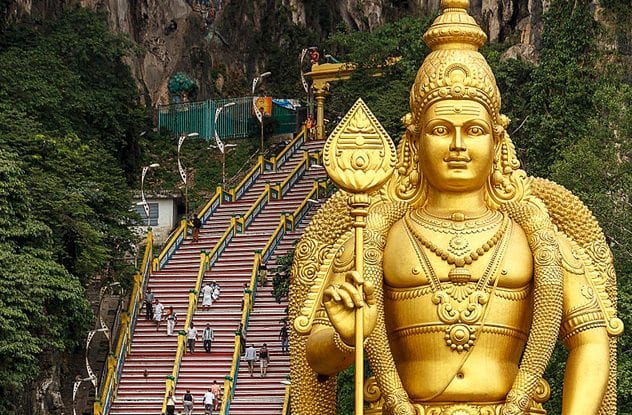 To reach the underground shrines at Batu, pilgrims must first climb up 272 steps. Cathedral cave, at the top of the mountain, has an arched roof 100 feet high. Under this dome can be found various Hindu shrines.

During the festival of Thaipusam, devotees of the Lord Murugan will walk from Kuala Lumpur to the Batu caves. They carry offerings on special platforms called Kavadis on their shoulders. Most impressive is the mortification of the flesh, piercing the cheeks, nose, or ears. Others will have hooks pushed through their skin. When they reach the top, priests bless the pilgrims by sprinkling them with holy ash. Then they may enter the richly colored caves. 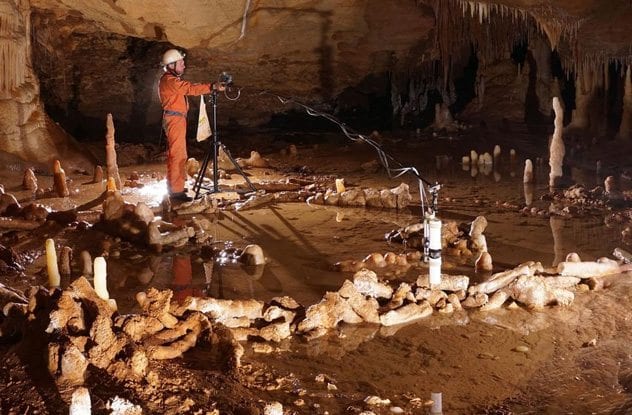 175,000 years ago, someone entered a cave in France and ventured 1,000 feet from the entrance into the darkness. Here, they broke the natural rock formations, the stalactites and stalagmites, and arranged them into a circle. 400 of them were knocked into similar lengths. Whoever did this was surprisingly adventurous. Whoever they were, they were also not human.

The age of this structure puts it 100,000 years before the first modern humans came to Europe. The best guess is that the site was built by Neanderthals. The location of the circle, as well as its limited scale, make it unlikely it was a living space. Burned bone fragments and other evidence of fire show it was artificially lit.