Guinness World Records recognizes Robert Wadlow as the tallest human ever for whom there are indisputable, documented measurements. The Alton Giant, as he was called, stood 272 centimeters (8’11″) tall. Robert’s stature led to a very unique life, and he became something of a celebrity for his height. Being the tallest person who ever lived, however, wasn’t always easy.

10He Was Normal-Sized At Birth 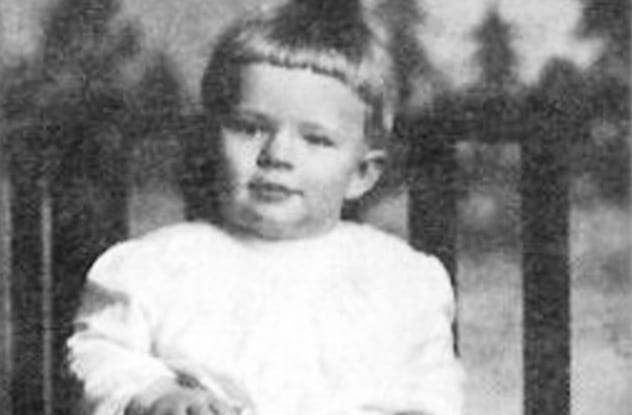 Robert Pershing Wadlow was born on February 22, 1918, in Alton, Illinois, a town along the Mississippi River not far from St. Louis. The first child of parents Harold and Addie Wadlow appeared completely normal at birth, weighing 3.8 kilograms (8.4 lb). He was a normal-sized baby, and why not? Harold and Addie were of average height, and their subsequent four children after Robert were also of normal height.[1] 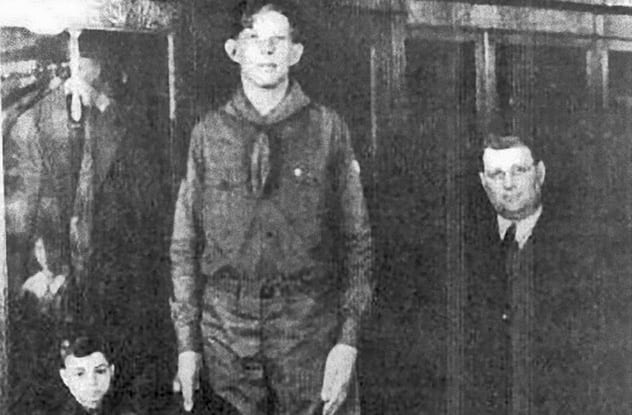 When Robert was five years old, he stood 163 centimeters (5’4″) and weighed 48 kilograms (105 lb). When he entered kindergarten, he wore clothes sized for a 17-year-old. Robert was said to be well-behaved in school and smart for his age. His main difficulty was finding desks that he could sit in.[2]

By the time Robert was eight, few stores had clothes that would fit him properly, and he became a regular customer for tailors. At age nine, Robert was able to carry his father up a flight of stairs. At 10, he’d reached a height of 196 centimeters (6’5″) and a weight of 95 kilograms (210 lb). His shoe size was 17.5. Try finding shoes of that size at a local store in 1928.

Robert joined the Boy Scouts at 13, becoming the world’s tallest Boy Scout at 224 centimeters (7’4″). He required a specially made uniform, sleeping bag, and tent. At this time, the ever-growing teen was consuming five times as many calories per day compared to typical boys his age. When Robert graduated high school, he towered over his classmates at 254 centimeters (8’4″). He tipped the scales at 177 kilograms (391 lb). 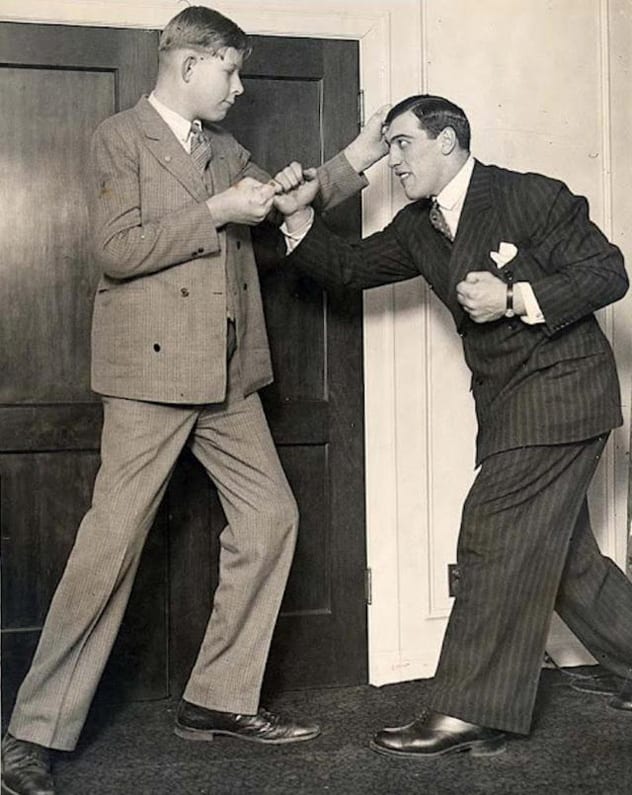 Not long before his 12th birthday, Robert and his family visited Barnes Hospital in St. Louis. There, the 211-centimeter (6’11″) boy finally learned just why he was growing so prodigiously. He had an overactive pituitary gland that was releasing far too much growth hormone.

The most common cause of an overactive pituitary gland is a benign tumor (called an adenoma) forcing excess hormone to be secreted. More often than not, such growths will cause too much prolactin to be secreted, but in some cases, excess growth hormone is released. It is also possible for pituitary tumors to simply be present without affecting hormone release at all. Such tumors are referred to as non-secreting.[3]

Today, several medical interventions can deal with adenomas, such as surgery or medication. In 1930, however, no treatments were available. Robert would only continue to grow.

7The Difficulties Of Being The Tallest 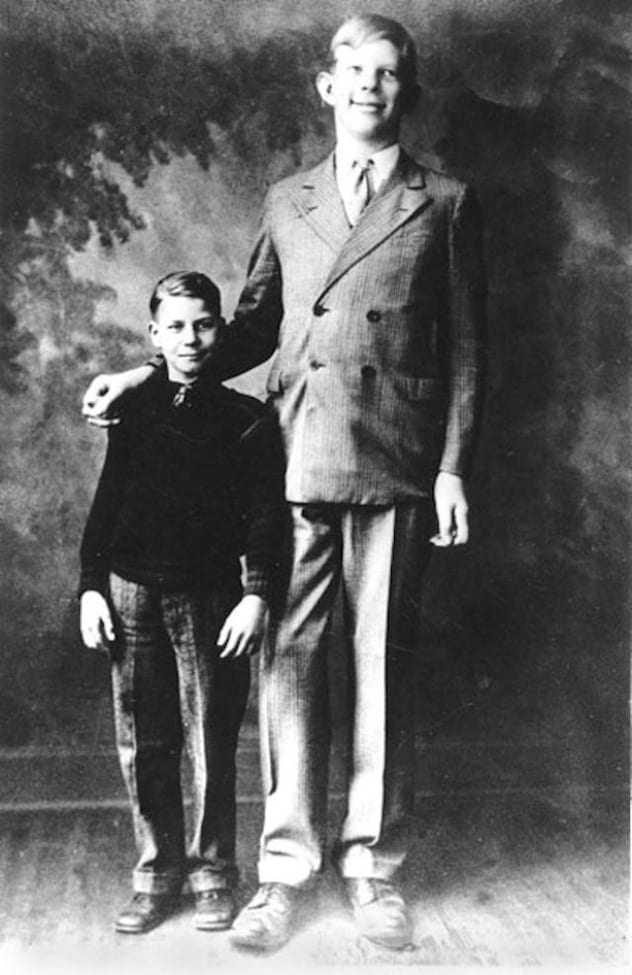 Being a literal giant isn’t easy. For one, Robert required a lot of food. A typical breakfast during his teen years consisted of eight eggs, 12 slices of toast, several glasses of orange juice, five cups of coffee, and plenty of cereal.[4]

Robert’s size began to take its toll on his body from a young age. His heart didn’t have an easy job, having to circulate blood to the ends of his long limbs. At age 10, his feet were cyanotic, meaning that they had a blue color due to poor circulation. Robert had little sensation in his feet. He would not feel minor injuries to them until they were aggravated and raw.

When he was 14, Robert stumbled only slightly while pushing a boy on a tricycle, but doing so still broke two bones in his feet. Afterward, he had to wear an iron brace on that leg. As an adult, Robert needed leg braces to walk and also used a cane nearly as tall as an average adult. However, he never required a wheelchair.

Physical ailments aside, Robert lived in a world that was too small for him. To sit at tables, he had to keep his legs straight, causing his feet to stick out from the other end, where people would inevitably trip over them. There was always the danger of chairs breaking under his weight. He had to stoop considerably to get through most doors, and most ceilings weren’t high enough for him to stand up straight. If Robert stayed at a hotel, he needed multiple beds pushed together. Common activities such as going to the movies were unfeasible for him. 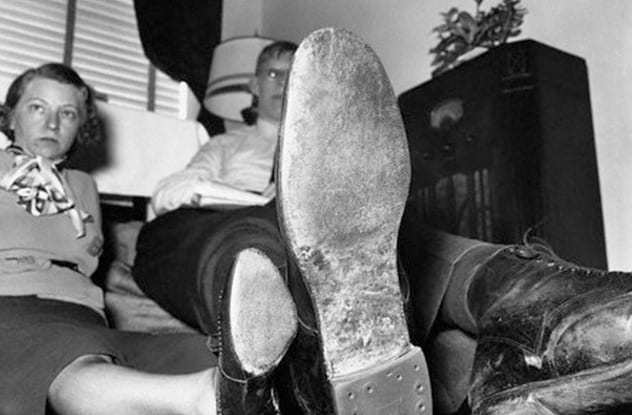 In 1936, Robert did a tour of the US with the Ringling Brothers Circus. In general, his main source of income was public appearances. When he was 20, he found a useful arrangement as a paid spokesman for the International Shoe Company, which also agreed to build his $100 shoes for free. He visited more than 800 towns in 41 states, traveling over 500,000 kilometers (300,000 mi) for the company. Robert also became a Freemason, presumably the tallest ever.[5] 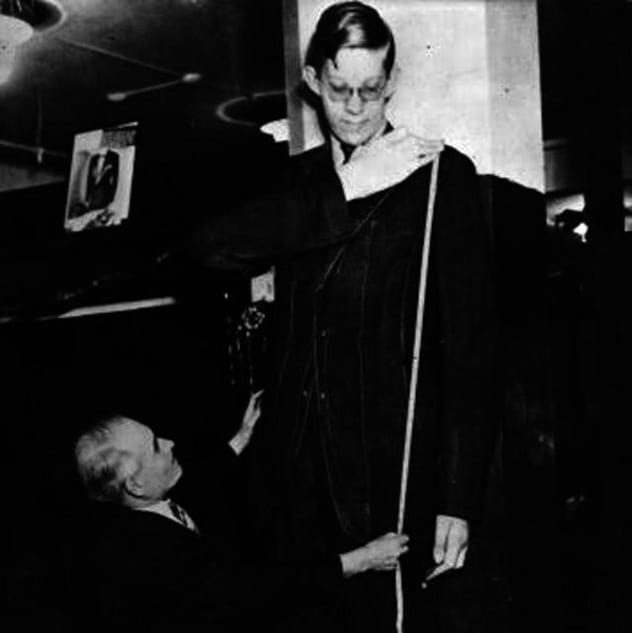 Robert was a very big man, and he needed some very big items for day-to-day life. All of his clothes had to be custom-made and required three times the normal amount of material to assemble. As previously mentioned, his shoes were both big and expensive. Unlike Robert’s other clothes, however, building his shoes was more than a question of extra leather. To withstand the stress they’d be placed under, the footwear had to be constructed with special materials and reinforced with metal parts. Robert also had a 2.9-meter (9.5 ft) bed at home.

For Robert’s shoe spokesman travels, his father modified the family car. The front passenger seat was removed, allowing Robert to sit in the back and stretch his legs out. The seven-person automobile effectively became a three-seater.[6]

In 1937, Robert’s parents made plans to build him a house scaled for his tremendous size. The doors would have been 2.7 meters (9 ft) high, the ceilings would have been 3.4 meters (11 ft), and even the stairs would have measured 0.6 meters (2 ft). All the furniture would have been fitted to Robert, and he would have had a 3-meter (10 ft) bathtub. The bathtub alone provided quite a snag, as it would have had to have been cast at a foundry, at a cost of up to $1,000. The plans for the house never came to fruition. 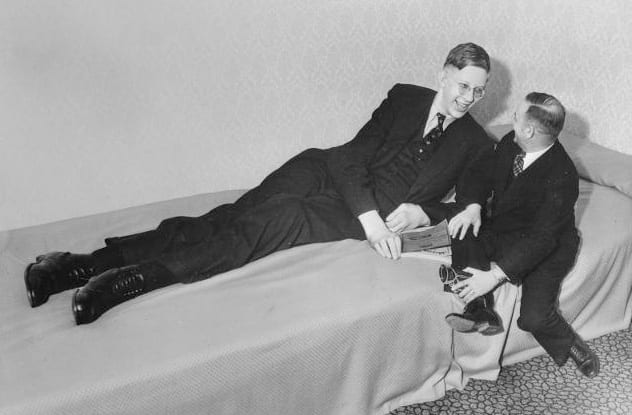 Robert was known for being quiet, good-natured, and friendly and was nicknamed the “Gentle Giant.” In his spare time, he was said to enjoy photography and stamp collecting. Many of his days, however, were spent facing crowds.

Outside his hometown, he couldn’t walk far without a group of onlookers accumulating and invariably stepping on his feet as they drew close. On top of that, his job also involved facing large assemblages of people. Robert generally didn’t mind. When asked if it bothered him when people would stare, he said, “No, I just overlook them.”[7]

Some crowd antics could get on Robert’s nerves, though. He didn’t like questions on how much he ate, and he especially grew tired of being asked, “How’s the weather up there?” When he was 18, Robert told a newspaper reporter that he hadn’t heard a new joke about his height in three years. Robert would sometimes bring his photography into his public appearances, surreptitiously photographing the crowds without their realizing it. His hands were large enough to completely conceal his camera, with the lens poking out between his thumb and forefinger. 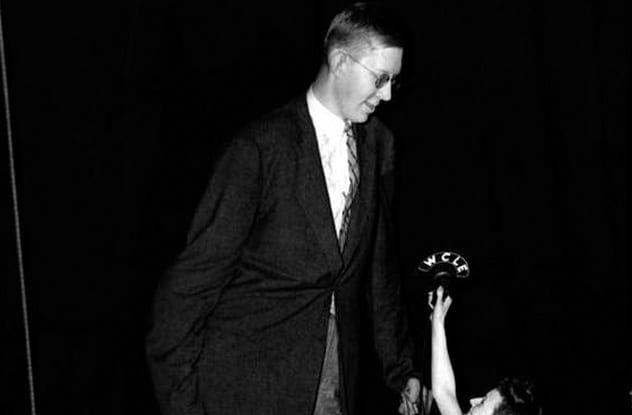 On June 2, 1936, a medical doctor named Charles Humberd visited Robert and his family. According to the Wadlows, he was very rude, and Robert ultimately refused to cooperate with Humberd or be examined by him. Humberd then trashed Robert in a paper published in The Journal of the American Medical Association (JAMA).

The JAMA write-up described Robert as “surly,” “apathetic,” “antagonistic,” and “vapid,” among other things. Humberd painted Robert as a bitter introvert, angry with his physical state. He also expressed doubt on various teachers’ claims that Robert was intelligent. Humberd derided Robert as having “defective attention” and stated, “All functions that we attribute to the highest centers in the frontal lobes are languid and blurred.”

The Wadlows decided to sue Humberd for libel. He had made all these insulting claims about their son based on cursory observations. In court, several witnesses refuted Humberd’s description of Wadlow. Nevertheless, the Wadlows lost the suit, as the judge concluded that it could not be proven that Humberd’s description of Robert wasn’t accurate the day he met him. The family chose not to appeal.[8] 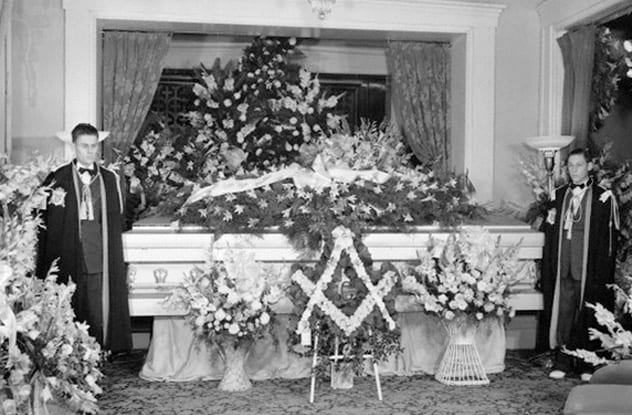 On July 4, Robert appeared at the National Forest Festival in Manistee, Michigan, and walked in a parade. The next morning, he had a temperature of 41 degrees Celsius (106 °F). A doctor was called. Upon examining Robert, he discovered that his new iron brace, which had been fitted a week earlier, had created a large blister on his right ankle that would normally have been painful, if not for Robert’s poor sensation in his lower extremities. The blister was infected and septic.[9]

Robert had to sleep at a hotel, as the hospital had nothing large enough to accommodate him. He remained bedridden for days. Despite doctors’ best efforts, the infection would not abate. Robert Wadlow died in his sleep at 1:30 AM on July 15, 1940. 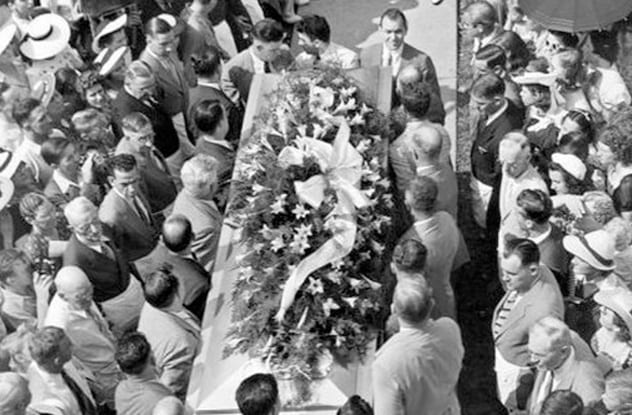 Over 40,000 people attended Robert’s funeral in Alton. All businesses in town closed for the service as a show of respect. Robert was buried in Alton’s Oakwood Cemetery. Two grave plots were needed for his interment.

Robert’s coffin was 3.3 meters (10.8 ft) long. The 450-kilogram (1,000 lb) casket required 18 pallbearers and stuck out from the back of the hearse carrying it, necessitating a black cloth to be draped over the vehicle’s doors to cover the remainder. The Wadlows feared that Robert’s body might be dug up, perhaps by doctors for research, so his coffin was placed in a solid concrete vault. His tombstone has a simple epitaph of “At Rest.”[10]

After Robert’s death, his family destroyed most of his possessions to prevent them from being stolen and exhibited as “freak memorabilia.” Some items survive, however. In 1985, a life-size statue was constructed at the Southern Illinois University of Dental Medicine in Alton.