September 15, 2017, marked the release of writer-director Darren Aronofsky’s new horror-thriller mother!, starring Jennifer Lawrence and Javier Bardem as a couple whose relationship is tested when uninvited guests, played by Ed Harris and Michelle Pfeiffer (among others), arrive at their home and disrupt their tranquil existence.

The movie was shot under a veil of secrecy. It was only a few months before its release that we were given any information on what to expect from the film.

On top of some fun and freaky secrets from behind the scenes of mother!, we will also tell you everything we think you should know before saddling up and buying your ticket for (or renting, when available) this controversial film. For better or worse, here are the top 10 crazy things you should know about Darren Aronofsky’s mother!, starring Jennifer Lawrence. 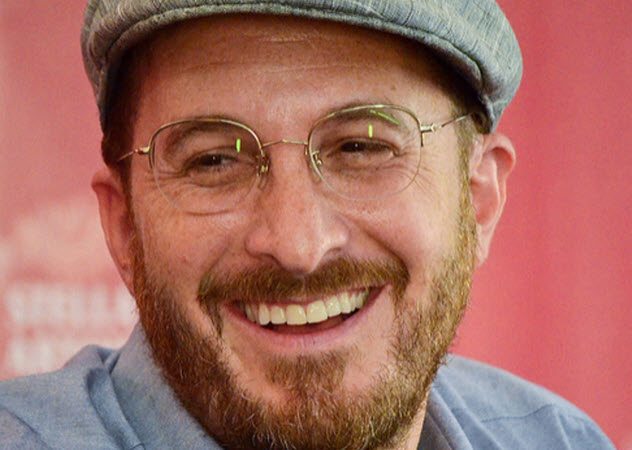 For those who might not know, Darren Aronofsky is the writer-director of such classic films as Pi, Requiem for a Dream, The Wrestler, and Black Swan. Suffice it to say the man knows his way around a screenplay.

That said, the script for mother! was written in a mere five days.

Aronofsky spoke about the writing of the film with reporters before its premiere at the Venice Film Festival. “I just had a lot of rage and anger, and I just wanted to channel it into one emotion, one feeling,” he said. “And in five days, I wrote the first version of the script. It just sort of poured out of me.”

The director then told Variety, “It was a strange experience. Most of my films take many, many years to come to life. Black Swan was 10 years, Noah was 20 years, and this film happened in five days.”

Ironically enough, the original title for the film was Day 6.[1] 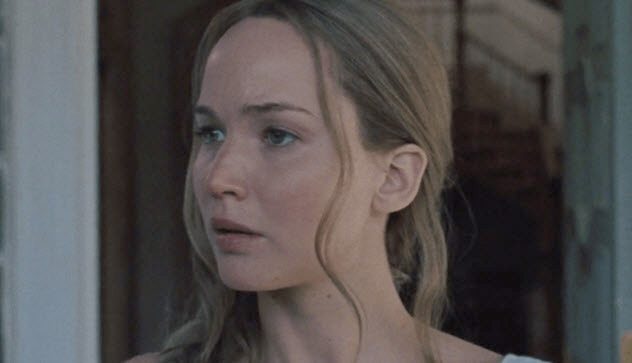 Jennifer Lawrence is well-known for taking roles (fairly) seriously, but she took her acting to the next level in Darren Aronofsky’s new film. During a scene, she was hyperventilating so intensely that production had to be put on hold so that the actress could be put on oxygen.

Turns out that she had hyperventilated so heavily during the take that she dislocated a rib.

Lawrence told Vanity Fair about the incident: “I have oxygen tubes in my nostrils, and Darren’s like, ‘It was out of focus; we’ve got to do it again.’ And I was just like, ‘Go f—k yourself.’ ”

To help Lawrence calm down after takes, the crew built her a happy room. This room—or more specifically, this tent—was filled with gumballs and contained a TV which played clips of Keeping Up with the Kardashians on a constant loop.[2]

After the fact, director Aronofsky was asked about Lawrence’s “happy room” and responded, “I wasn’t involved in that. I was like, ‘What are you talking about, the Kardashians?’ ”

Good to know that the director of a movie as strange as mother! finds the use of the Kardashians as a soothing method to be a fairly insane idea. That makes us feel a whole lot better. 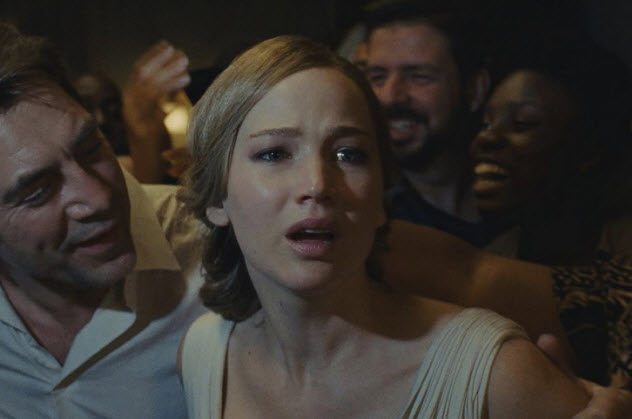 If you have ever seen any of Aronofsky’s other films, this will not surprise you at all. From his horrific Requiem for a Dream, which was so outrageously grotesque and intense that the film was slapped with an NC-17, to his more recent Black Swan, Aronofsky doesn’t shy away from graphic violence and sexuality.[3]

Considering the rating bestowed upon the film by the MPAA, mother! seems to be no different. Rated “R” for “strong disturbing violent content, some sexuality, nudity, and language,” mother! might be a film that you should think twice about watching with your own mom.

Unless, of course, she’s into that kind of thing. In which case, more power to you and yours. Enjoy the film.

7 Jennifer Lawrence And Darren Aronofsky Started Dating During The Production 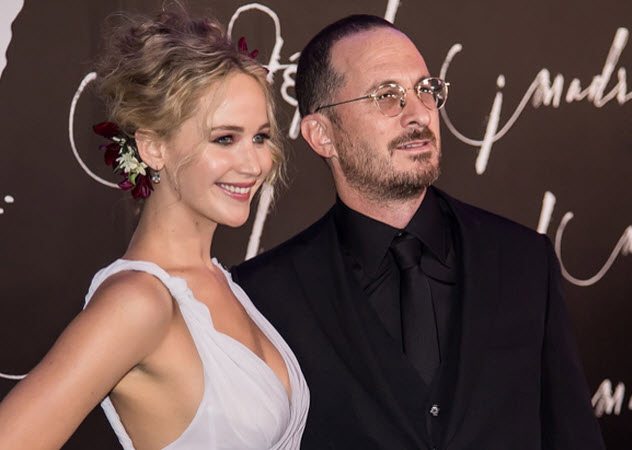 Okay, we may be getting into the realm of gossip here. But all the same, it’s an interesting bit of info on the film. Yes, star Jennifer Lawrence and writer-director Darren Aronofsky began dating after the movie had wrapped. Meaning for all of the dislocated ribs and whatnot, the shoot must have been fairly pleasant.

On the subject of her new relationship with the highly regarded director, Lawrence has been quoted as saying, “We had energy. I had the energy for him. I don’t know how he felt about me.” She also praised the director as an “amazing father.” Despite the couple’s age difference (Aronofsky is 48, Lawrence is 27), they seem to get along just fine.

“I normally don’t like Harvard people because they can’t go two minutes without mentioning that they went to Harvard,” Lawrence told Vanity Fair. “He’s not like that.”[4]

Good for him. No one likes when I flaunt my community college roots, either. 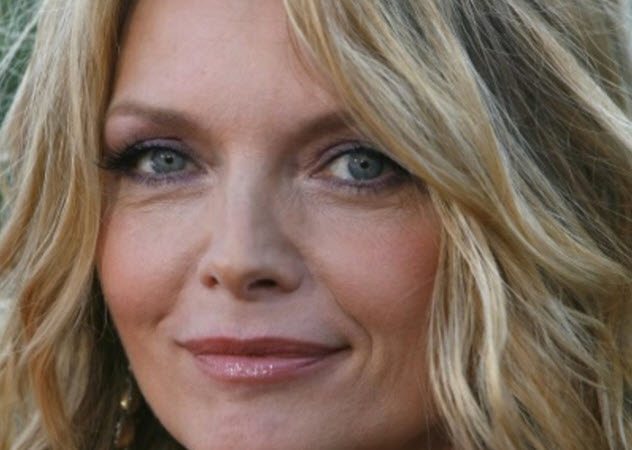 If you find yourself a bit puzzled by mother!, you can take comfort in the fact that the beautiful and talented Michelle Pfeiffer was just as confused as you. Albeit much earlier in the process.

In an interview that Aronofsky conducted with Pfeiffer prior to the film’s Venice Film Festival premiere, Aronofsky asked her what she thought of his script when she first read it. Pfeiffer replied, “I can’t say I understood the script the first time.”

Then she continued, “It’s a little bit esoteric, right?” Finally, she added, “I definitely loved this character. I loved her. I got it. I could definitely hear it.”[5]

Glad to know she finally found her place in the role, especially considering it looks like a knockout performance to us. And since when is it a requirement for an actress or actor to fully understand the script they’ve been handed before agreeing to take on their designated role? 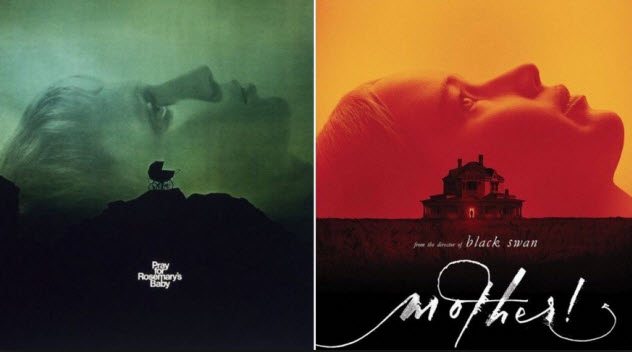 How does that old saying go again? “Imitation is the most sincere form of flattery”?

One of our favorite psychological horror films of all time is Roman Polanski’s masterpiece Rosemary’s Baby. So when the above poster for Aronofsky’s new film hit the scene, it took all of 10 seconds for us to scream, “Rosemary’s Mother?”

However, the movie is not supposed to be a remake or a reimagining of Polanski’s film or anything of that nature.[6] Aronofsky and his marketing team just love the film as much as we do.

Right. Anyhow, you can check out the two posters above and make the decision for yourself. Is the poster a loving homage to the classic or a shameless rip-off?

We go with the former. 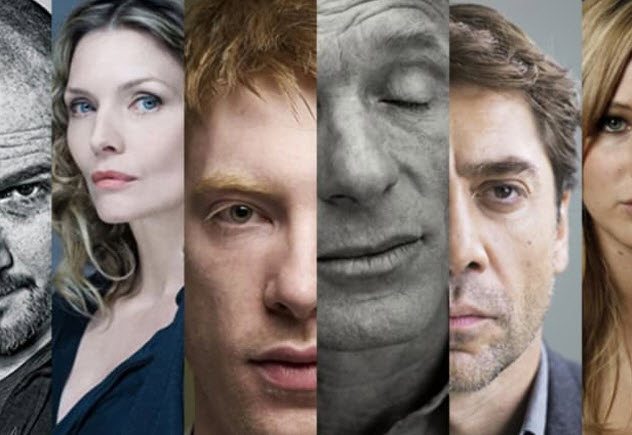 Make no mistake, mother! is a strange movie. If you needed an indication of just how “weird” and “out there” Darren Aronofsky’s film is, take a quick gander at the cast list on IMDb.

With Jennifer Lawrence playing a character simply called “Mother” and Javier Bardem portraying a character named “Him,” you’ll have a good idea of the kind of art house movie you’re walking into.

Add to that other character names such as “Whoremonger,” “Fornicator,” “Slave Driver,” and Kristen Wiig’s “Herald,” and you wouldn’t be accused of stupidity in thinking that this was a new George Miller Mad Max film.

Seriously, head on over to the cast list[7] after reading this article, and look through all the names. It will be one of the more entertaining things you do all day. 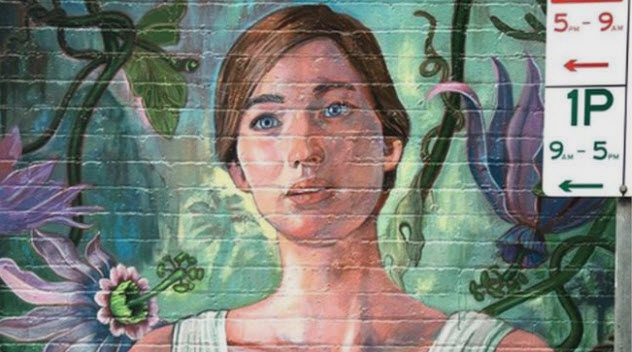 In what has to be our favorite bit of trivia surrounding mother!, the movie’s marketing team came under a good amount of fire after they hired an artist to paint a mural of the film in Sydney, Australia.

Apparently, the mural covered up a 20-year-old painting by a local artist depicting animals in a cityscape below the words “it’s like a jungle sometimes.” This line refers to a song by Grandmaster Flash and The Furious Five.[8]

Aronofsky was embarrassed about the mural being painted over the historic piece of art and apologized on behalf of the ad agency, Apparition Media. A spokesperson for the agency said they were unaware of the iconic nature of the mural and regretted their “terrible mistake.”

The agency has since contacted the mural’s original artist and offered their help in restoring the artwork to its original form. So that was nice of them.

2 The Film Was Booed At Its Premiere 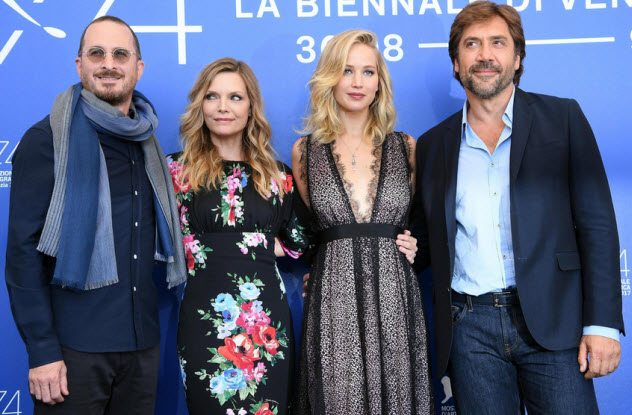 Writer-director Darren Aronofsky is no stranger to the Venice Film Festival. In 2008, his film The Wrestler (starring Mickey Rourke) took home the festival’s top prize, the Golden Lion. In addition, the festival has been the home of premieres for his films The Fountain and Black Swan.

Aronofsky even acted as the head of the festival’s main jury in 2011.

However, when mother! premiered at the prestigious festival in early September 2017, the admittedly strange movie was met with booing from the audience. Still, many say the boos were “battling it out” with cheers from the audience.[9]

So Aronofsky’s mother! is pretty much in line with the rest of his filmography. You’ll either love it or hate. And there is nothing wrong with a film eliciting that response from an audience. 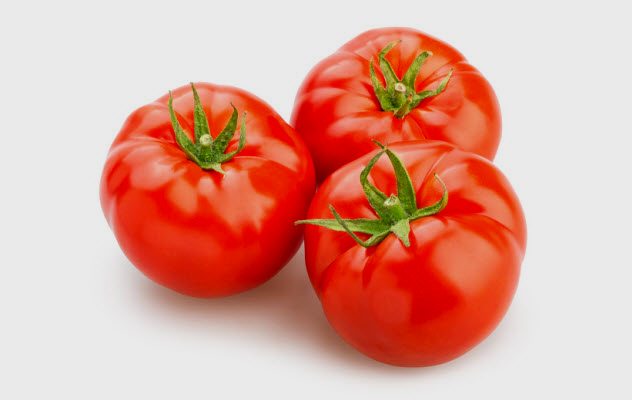 As of September 2017, mother! sports a “certified fresh” rating on Rotten Tomatoes.[10] There has yet to be a critical consensus, but the good word of mouth seems to be vastly outweighing the bad.

In the end, it is really up to us, the audience, to decide what we think of the movie. If you haven’t seen it already, are you excited to see the film? And most importantly, do you think the movie’s advertisements are telling the truth when they say, “You Will Never Forget Where You Were When You First Saw mother!”

Let’s hope that last bit is true. We need a new mind-blowing horror-thriller. It’s been too long. About as long, in fact, as it’s been since Aronofsky’s Black Swan hit theaters.

Let’s hope that mother! is more in the vein of that mini-masterpiece than the director’s previous film Noah. That movie can stay underwater for all we care.