In 2016, the opioid crisis took the lives of 59,000 Americans. Estimates suggest there are 2.6 million prescription opioid addicts in the US—and nearly double that number of heroin users. To date, 77 million Americans have fallen victim to the crisis in some way.

The medical and pharmaceutical industries are at the heart of the problem, along with an influx of cheap heroin from Mexico and US-controlled Afghanistan, dealer access to synthetic super-opioids like fentanyl, and fatal despair in many parts of the country. Here are ten facts about the United States’ opioid crisis. 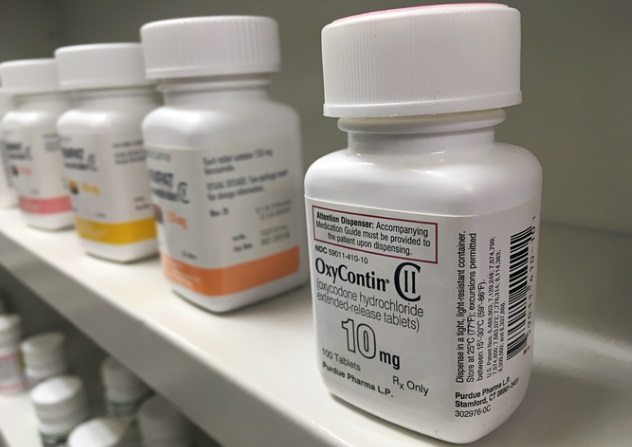 In May 2007, the makers of prescription opioid OxyContin pleaded guilty to misleading doctors, patients, and regulators about the risks of the drug. Purdue Pharma agreed to pay over $600 million for intentionally masking the drug’s risk for addiction and abuse. The payoff resolved both civil and criminal charges against the pharmaceutical giant.[1]

Launched in 1996, OxyContin received the most aggressive marketing campaign of any narcotic painkiller. Within a few years, sales increased to $1 billion annually. The key to OxyContin’s “safe” use was its time-release mechanism. However, users quickly discovered that crushing the tablets would result in a high as powerful as heroin. Internal documents revealed that Purdue Pharma was aware of the resistance OxyContin would face. The company specifically promoted the drug for prescription by general practitioners, who often have limited experience with pain management and detecting abuse in patients. Sales officials distributed fraudulent charts to doctors regarding OxyContin’s risk potential. 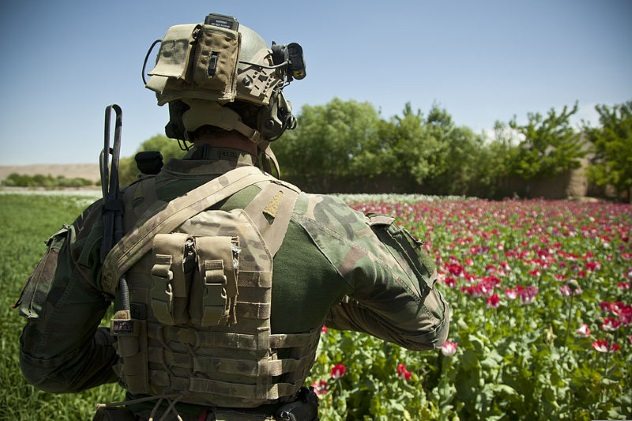 Prior to the US/NATO-led invasion of Afghanistan in 2001, there were 189,000 heroin users in the United States. By 2016, the number had skyrocketed to 4.5 million. Between 2000 and 2001, the Taliban, working with the UN, banned opium production. Months before the invasion, they’d successfully reduced cultivation from 82,000 to 7,600 hectares. By 2016, the production area had increased to 224,000 hectares. This exponential expansion occurred at the same time the US led a taxpayer-funded $8.5 billion eradication program of Afghanistan’s opium poppies.[2]

In the 1960s and 1970s, the CIA collaborated with opium producers in the Golden Triangle in exchange for help combating Communism. In the 1980s, they imported Nicaraguan cocaine for sale in Los Angeles to fund contras. Currently, the US occupation of Afghanistan is in its 16th year, making it the longest conflict in our nation’s history—providing ample opportunity and incentive to dip into the lucrative opium trade. 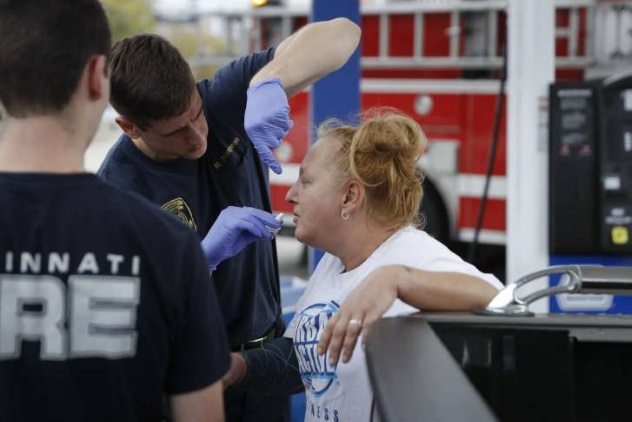 Naloxone is a lifesaver. This opioid antagonist can instantly reverse an overdose by binding to our brains’ opioid receptors. Naloxone isn’t new; generic versions have been available for years. Today, six companies manufacture naloxone. Five produce it in intravenous forms, while one produces a nasal spray called Narcan. Because Narcan can be easily administered, it is rapidly becoming the most popular form of naloxone with police and medical professionals.

The reaction of local law enforcement and first responders to opioid antidotes is mixed. The sheriff of Ohio’s Clermont County believes it is a “call of duty” to have deputies carry the lifesaving nasal spray. However, a mere 80 kilometers (50 mi) away in Butler County, law enforcement will have nothing to do with the overdose antidote. Butler County’s sheriff doesn’t want to put his officers at risk performing a task better-suited for medical professionals. Many claim naloxone “enables” users.[3] 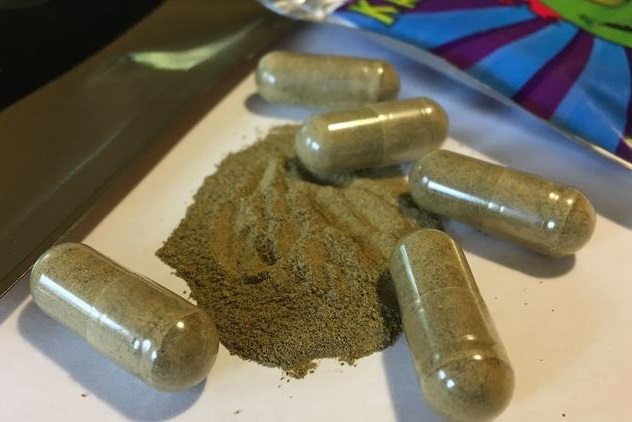 In October 2016, federal regulators reversed a decision to ban a plant that might be able to alleviate the opioid crisis. Two months prior, the DEA categorized the Southeast Asian kratom plant as a Schedule I substance, alongside LSD and heroin. The DEA claims kratom has been responsible for the deaths of 15 individuals between 2014 and 2016. However, 14 of those 15 had other drugs in their system.[4]

Typically consumed in a tea, kratom contains mitragynine and 7-hydroxymitragynine—chemicals that activate our brains’ opioid receptors. At low doses, kratom provides a gentle stimulation. However, at higher doses, it produces a sedative effect and numbs pain. Kratom may be a less addictive alternative to opioids. When consumed, the plant causes users to experience opioid-like effects without the potentially fatal respiratory depression associated with heroin. Thailand (Siam at the time) banned kratom in 1943 because it threatened to decrease tax revenue from opium sales. 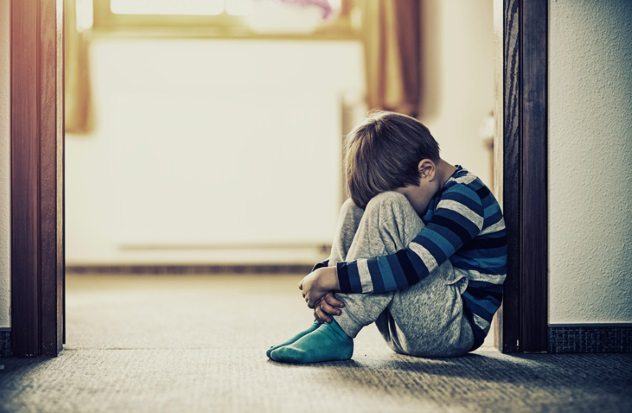 Children are the hidden victims of the US opioid crisis. Abandoned by addicts, orphaned by overdoses, or forcibly removed by protective services, tens of thousands of children have been ripped from their families. According to the Department of Health and Human Services, 92,000 children entered the foster system in 2016 as a result of the opioid crisis. This is the most in more than 30 years. The last time the US saw a tidal wave of lost children was the crack epidemic of the 1980s. This time, opioids are the culprit.[5]

Georgia, Indiana, and West Virginia had the biggest increases of drug-related foster placements in 2016. Vanderburgh County, Indiana, with a population of 179,000, had more children of drug users enter the system than Los Angeles, Miami, or Seattle. Babies born addicted to heroin are also increasingly common. With high-pitched shrieks, insomnia, and tremors, neonatal abstinence syndrome leads to agonizing withdrawal pains. 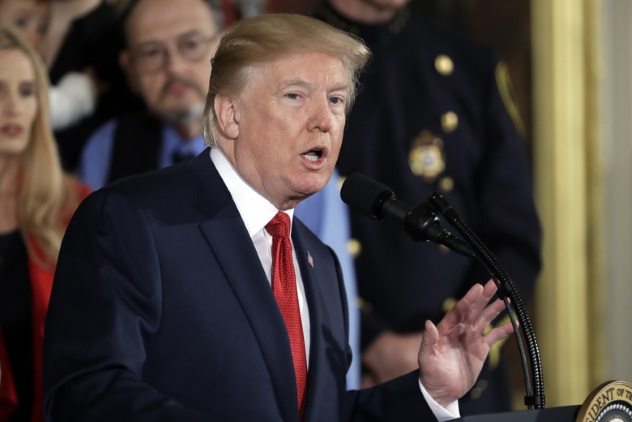 In October 2017, President Trump declared the opioid crisis a “public health emergency.” However, without room in the budget to combat the national scourge, his administration has forced state and local authorities to pick up the slack. Despite campaign promises, the first year of the Trump presidency ended with little more than tough talk.[6]

On top of that, the GOP tax bill could mean savage cuts to Medicare, Medicaid, and other programs which provide the very funding local governments need to combat the crisis. “Mentioning a few helpful items [ . . . ] is not a plan for tackling a public health emergency,” notes Brandeis University’s opioid policy expert Andrew Kolodny. “We need a plan with details, we need an appropriation request in the billions to build a treatment system.” 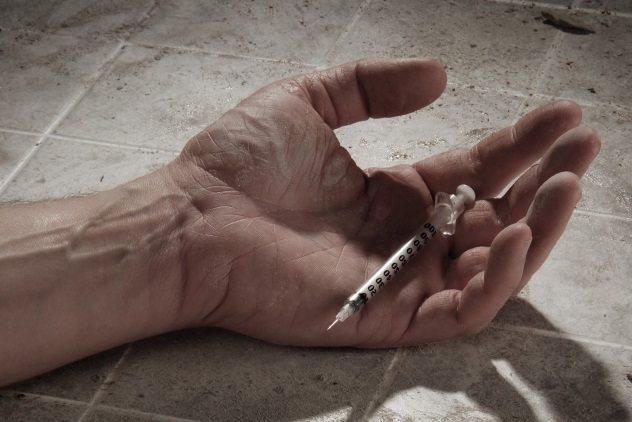 In October, the Centers for Disease Control reported that 50 percent of opioid overdose deaths in 2016 were linked with fentanyl. A synthetic opioid that can only be legally administered by a doctor, fentanyl and its analogues killed at least 20,000 people in 2016. 50 times stronger than heroin, fentanyl has become the opioid of choice in many parts of the US—like New England. According to the DEA, much of the fentanyl that hits New England streets is manufactured in Mexico using Chinese precursors.[7]Cartels exploited New England’s long history of abusing prescription painkillers. Initially, they introduced “garbage heroin” at 18 percent purity. However, starting in 2015, they began marketing a product known as “China White”—supposedly of higher potency and purity. In reality, it was the same heroin spiked with fentanyl. Some street-level dealers might not even be aware that their product is cut with fentanyl. Ignorance and potency increases the probability of overdose. 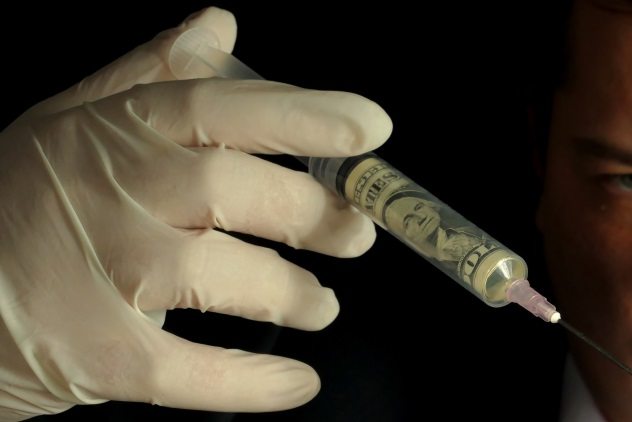 The White House Council of Economic Advisors calculated the true cost of the US opioid epidemic in 2015 at $504 billion. Six times higher than had been estimated, the figure was 2.8 percent of the country’s GDP that year. It represents money spent on health care and criminal justice as well as lost productivity. The epidemic is growing worse. Over the past ten years, overdose deaths have doubled. However, underreporting of prescription drug deaths in the past may have factored into the rapid increase.[8]

The National Institutes of Health currently spends $116 million a year on research to combat opioid addiction. The NIH’s Dr. Francis Collins has suggested that research funding would have to increase to four or five times to keep up with the accelerating pace of the crisis. The NIH’s goals are to develop pharmaceutical treatments for addicts, antidotes strong enough to combat fentanyl, and nonaddictive opioid alternatives for pain medication. 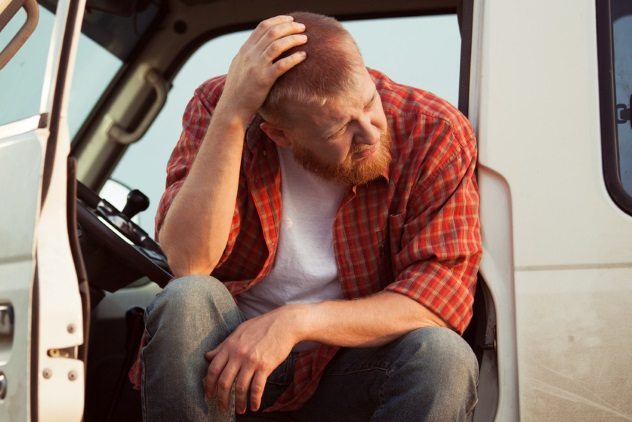 The US opioid crisis may be a symptom of a deeper problem. A recent study found that in some rural California counties, the premature death rate of white people between ages 25 and 35 has recently more than doubled. Funded by the California Endowment’s Building Healthy Communities, the study noted that opioid overdoses were only responsible for 33 percent the skyrocketing numbers. Alcoholism-related illnesses and suicide were also significant factors.

The spike in self-inflicted death leads many to suspect rural white Californians may be “dying of despair.” As the economy shifts from manufacturing toward information services, this population feels disenfranchised, turning toward chemicals and suicide. Approaching the fall of communism, Russia experienced a similar spike in death rate. This malignant malaise has been encroaching on America’s rural communities for decades. Some speculate that the shift toward a global economy, paired with a lack of social support, is generating fatal despair.[9] 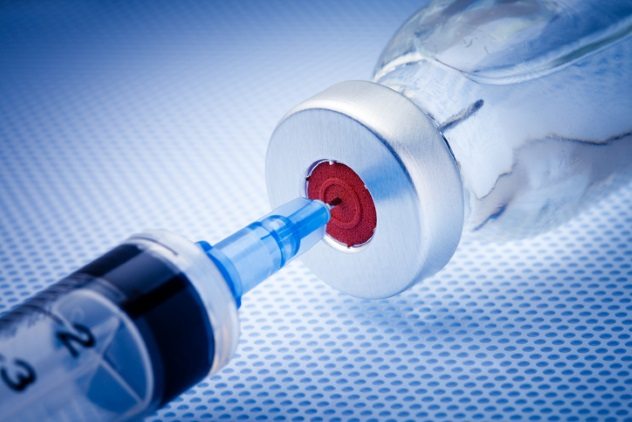 In response to the opioid crisis, some researchers are experimenting with vaccines. The goal: to block the drugs’ euphoria while alleviating the withdrawal symptoms. An inoculation would generate antibodies that specifically target opioid molecules. After receiving the vaccine, a user would find that the drug would be bound with antibodies before it could reach the brain.

However, every opioid vaccine effort since the 1970s has failed. Past results were unable to generate enough antibodies to provide effective opioid protection in humans. But people aren’t giving up hope. A team at the Scripps Research Institute announced that it had developed a vaccine that can counteract the effect of heroin on rhesus monkeys. The US Army has been tinkering with an opioid vaccine paired with an HIV vaccine. Vaccines specifically targeting withdrawal symptoms are showing promise. One such drug, lofexidine, has already been approved in the UK and is currently under FDA review in the US.[10]

A leading authority on occult music, Geordie McElroy hunts incantations and spell songs for the Smithsonian and private collectors. Dubbed the “Indiana Jones of ethnomusicology” by TimeOutLa, he is also front man of Blackwater Jukebox.

Read more about drug use and its effects on 10 Horrifying Facts About Flakka: The Zombie Drug and Top 10 Facts About Drugs And Warfare.