Visible from space, Australia’s Great Barrier Reef is the largest animal-made structure in the world. Across half a million years, it grew in layers and now displays over 3,800 individual reefs.

Despite the reef’s popularity, some of most fascinating facts surrounding it are not well-known. Its remotest corners still deliver unexpected surprises big and small. We’ll explore some of them now.

10 Half The Reef Is Dead 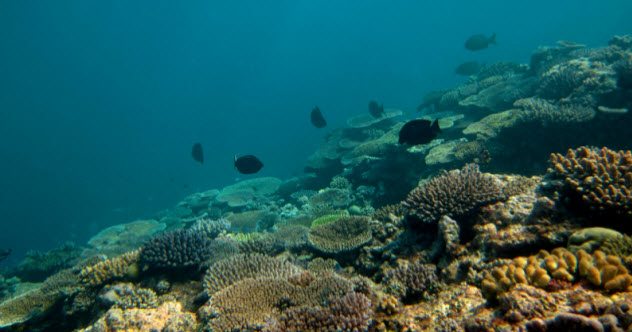 Ecologist Katharina Fabricius has explored the underwater wonderland since 1988. By 2012, she had discovered that the landmark had lost half its reefs. The dramatic percentage was calculated after Fabricius studied over 2,000 surveys of the Great Barrier Reef. They showed an annual loss of 3.4 percent over the past 27 years.

Most of the wreckage came from one creature—the sea star. While cyclones and climate-driven bleaching are also responsible, the crown-of-thorns starfish destroyed 42 of the estimated 50 percent of damaged coral.

The starfish does not resemble the cliche shape that most people associate with sea stars. The marine pest can grow to 0.9 meters (3 ft), and poisonous spikes cover its body and 21 arms.

Their numbers blossom because agricultural spills deliver the nutrients that baby starfish need. The abundance of food resulted in a massive coral-crunching population. The removal of the spiky crowd is difficult but critical.

The Fabricius research indicated that if their numbers dropped, the reef could survive. Even if cyclones and bleaching continue, the reef could completely recover within three decades.[1] 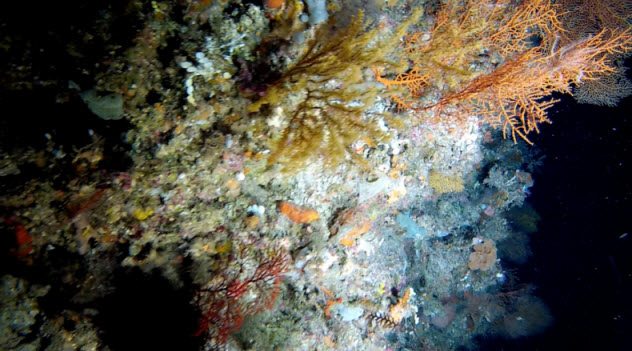 To view spectacular coral displays, most divers only venture 30 meters (100 ft) down. In 2013, scientists found the reef’s deepest corals and it came as a huge surprise. They flourished at an inky depth of 125 meters (410 ft).

Normally, polyps, the tiny coral builders, cannot survive in darkness. They get their nutrients from sun-loving algae. When a submersible braved the spooky space near the Australian continental shelf, it found coral called Leptoseris. They are usually found no lower than 100 meters (330 ft).

At this level, sunlight dims and sponges and sea fans take over. The remote vehicle also found Staghorn Acropora, the world’s most abundant coral. There exists a simple explanation for presence of the fans and sponges. They don’t need light to grow. But how Leptoseris and the Staghorn stay alive in an environment where they are not supposed to survive remains a mystery.[2] 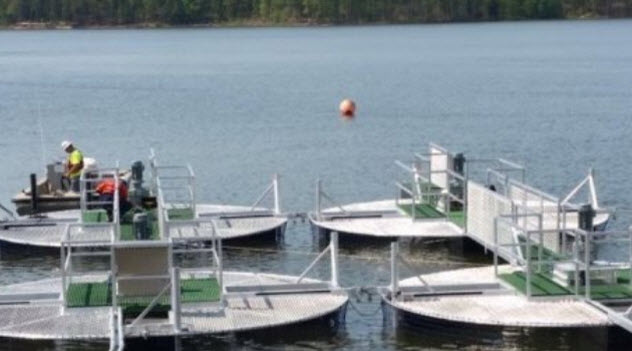 One might be forgiven for thinking that the suggestion to cool the reef with giant fans sounds crazy. But the science behind the $2.2 million project makes sense. Bleaching is caused by heat stress and turns healthy areas into ghostly white landscapes. During 2016 and 2017, the Great Barrier Reef underwent such severe bleaching that half the coral died.

The federal government decided to treat the warming reef to a fan. As a test, eight of these enormous fans will float in north Queensland. The trial is set to run for three years and will cool 1 square kilometer (0.39 mi2) off the coast of Cairns.

The solar-powered turbines might be slow, but they are capable of spawning cold water currents. During the 2016–2017 disaster, scientists noticed that bleaching occurred less in places where cool currents flowed. Coral also healed more quickly in these locations.

Since heat stress is just one factor threatening the reef, the fans won’t be enough to save it. For the time being, the project aims to protect popular tourist spots and the 64,000 jobs that depend on the industry.[3] 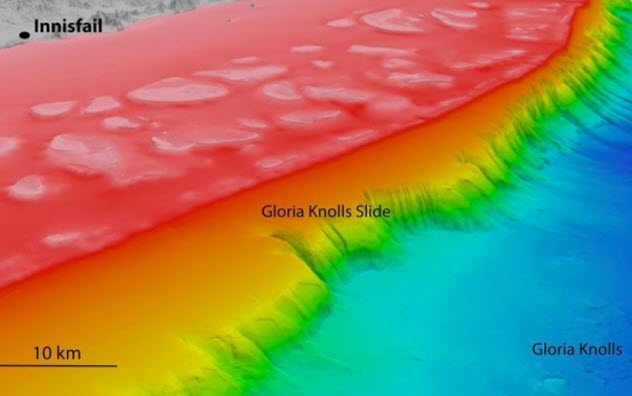 In 2017, researchers trawled the north Queensland coast. They were in the process of creating a 3-D map of the deep-sea floor when something unexpected showed up. The scans revealed an ancient landslide near the Great Barrier Reef.

The underwater event occurred on a massive scale and left debris across a vast area inside the reef. Among the first discoveries were eight hills in the Queensland Trough, previously thought to be mostly level. Some of these so-called Gloria Knolls are 100 meters (328 ft) high and 3 kilometers (1.9 mi) long.

They are not true hills but the main remnants of the slide. The total volume that shifted is an estimated 32 cubic kilometers (8 mi3), and scattered blocks were discovered as far as 30 kilometers (19 mi) beyond the Gloria Knolls.[4]

The latter provided the oldest coral fossil, aged 302,000 years old. Since the knoll was underneath it, this means that the avalanche was even older. The discovery of the landslide, along with its remarkable cold-water ecosystem, paints a clearer picture of the area’s true features and history. 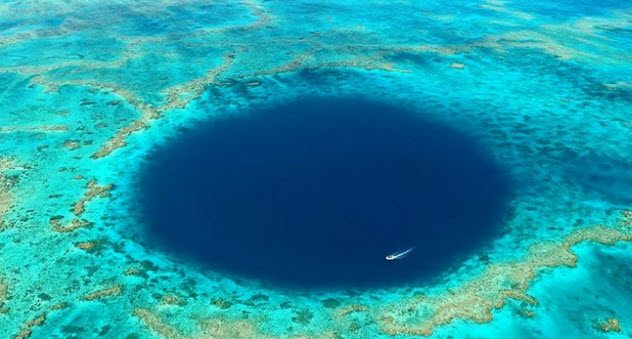 Sometimes referred to as the ocean’s time capsules, blue holes are underwater sinkholes. Inside, sediment builds up over millennia and avoids disturbances like storms and currents. This makes the blue holes highly valuable to researchers.[5]

In 2017, marine biologists managed to confirm rumors that one existed in a remote part of the Great Barrier Reef. Located 200 kilometers (124 mi) from Daydream Island, the hole held a happy surprise. Turtles and fish cruised inside the giant circular formation, but the showstopper was the abundance of exquisite and healthy coral colonies.

Birdsnest and Staghorn corals grew in unusual shapes, unimpeded by waves or currents. Both formed some of the largest and intricate colonies the divers had ever seen. The bottom was 20 meters (65 ft) down and sloped toward the middle. Geologists believe that this rare discovery might be older than its famous cousin, the Great Blue Hole in Belize. 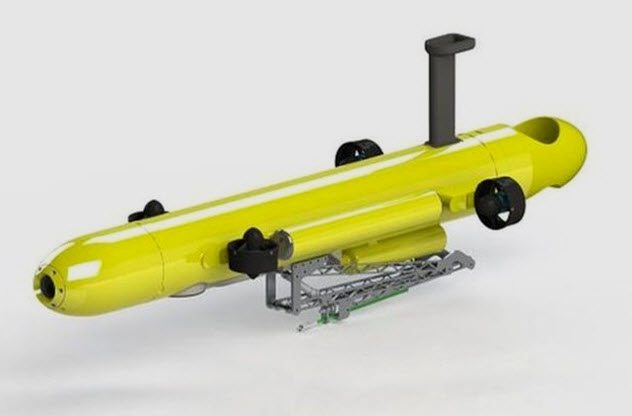 Floating fans might cool the reef, but they cannot do much for the starfish problem. For that particular pest, scientists created a killer robot. Called COTSbot, the yellow tube-shaped machine was designed to use artificial intelligence to identify crown-of-thorns starfish.

It was trained with thousands of images and videos to recognize the correct target. Once satisfied that it is looking at a crown starfish and not a particularly spiky octopus, it goes in for the kill. A robotic arm extends and delivers a lethal injection of bile salts.

COTSbot was designed to work completely on its own. But for now, the planet’s first starfish-killing robot hesitates. If uncertain about an object, it takes a picture and waits for a human to answer. A “yes” will activate the arm and store the encounter in COTSbot’s memory. Eventually, it will have enough experience to do its own thing without any human help.

In late 2015, the robot began its sea trials without the deadly brine injections. But once completely independent, it will patrol the reef for eight hours, with over 200 injections available during each shift.[6] 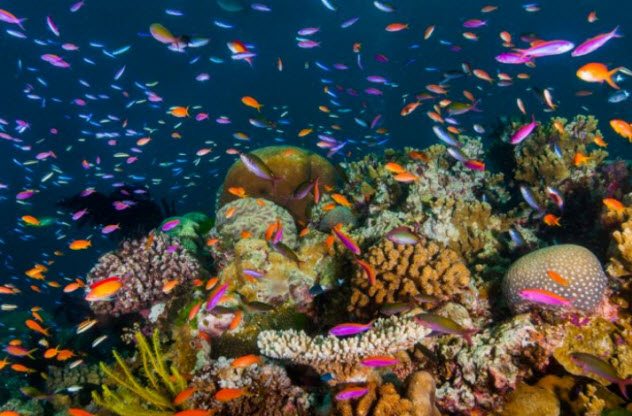 Another remarkable discovery from 2017 was the existence of “source reefs.” These are basically coral nurseries that can replenish more distant and damaged areas of the Great Barrier Reef.

Researchers set out to find such areas. When they did, they learned more about the amazing connectivity between reefs. To qualify as a source reef, an area must have a certain immunity to bleaching and starfish as well as a constant connection to other reefs via currents. Only 112 were found, roughly 3 percent of the Italy-sized Great Barrier Reef.

But this life support system is not infallible. Researchers do not fully understand how effective it is and why there are so few in the north. Also, the source reefs themselves can still be destroyed by climate change. 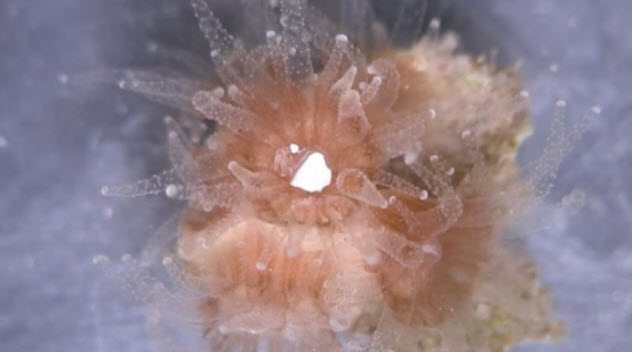 The reef faces a host of threats, but one of the strangest is the corals’ taste for microplastics. At first, scientists believed that the polyps gulped trash because it resembled prey. But laboratory tests proved that the coral enjoyed the taste, probably lured by a chemical inside the plastic particles.

The same study also found that the coral eventually realized the meal was useless. A few hours after ingestion, up to 92 percent of the plastic was expelled. Frighteningly, roughly 10 percent remained behind in the polyps’ stomach cavities.

The plastic was found deep inside the gut wrapped in digestive tissue. This could potentially create a feeling of fullness when the coral is really starving. Normally, plankton would be on the menu, but corals still seem to prefer the artificial alternative. There is no scarcity of microplastics, either. An estimated 13,000 pieces litter every 1 square kilometer (0.39 mi2) of ocean.[8] 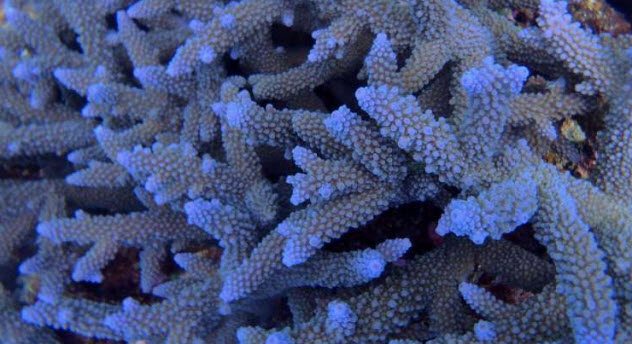 Death by drowning sounds odd for something that lives underwater. However, a coral reef can drown if water levels rise too high. The modern Great Barrier Reef is the latest layer of reefs reaching back to antiquity. Researchers examined the penultimate level that existed during the Last Interglacial period.

Around 125,000 years ago, this paleo-reef existed in an environment with higher sea levels and temperatures than today. It resembled a future Earth heated by uncontrolled CO2 emissions. This allowed a rare glimpse into what might happen if air pollution continues.

The view was not pretty. Melting polar ice and glaciers raised sea levels too fast. As it struggled to adapt, the reef came close to total destruction. But it also proved to be tenacious. When the water levels stabilized, the coral resumed growing.

While ending on a hopeful note for the fossil reef, things are different with the Great Barrier Reef. If there is a mass melting event, water is expected to rise as much as during the Last Interglacial. Already weakened, the reef could completely perish under the pressures of the 6-meter (19 ft) rise.[9] 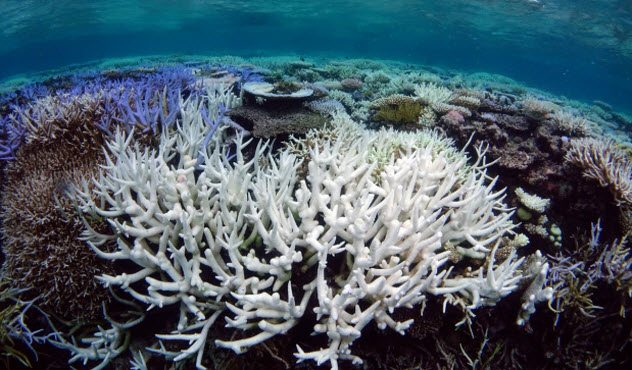 If there was a prize for creative solutions to save the reef, the University of Sydney would surely win. In 2017, researchers began printing exact 3-D replicas from the Great Barrier Reef. The project kicked off by virtually mapping the coral fields. These were analyzed for precise measurements of the structures before they were printed as three-dimensional objects.

Identical to the originals, the prosthetic corals have several responsibilities. Once planted on the reef, they will shelter fish that feed on coral-destroying algae and provide an anchor for living coral. Allowing structure for new growth, the replicas support the reef during recovery periods after storms and bleaching.

Artificial reefs are nothing new, but this is the world’s first attempt to create a natural-looking scene instead of sinking a ship and hoping the eels will move in. The Great Barrier Reef’s current connectivity is perfect to bring larvae from source areas to the artificial sanctuaries.[10]

As much as prosthetic coral colonies can help, they will only buy the reef time. Climate change, which fuels more storms and bleaching, needs to be dealt with if the reef is to survive.

When not obsessing over a list, Jana also writes adventure books which can be viewed here.