The earliest-known dictionary in the English language was The Elementarie, a list of 8,000 English words compiled by Richard Mulcaster and published in 1582. Before then, Latin had been the only respected language of learning. The first alphabetical dictionary, A Table Alphabeticall, was written by schoolteacher Robert Cawdrey in 1604.

Every year, hundreds of new words and phrases are added to the world’s dictionaries. Words like “blogger,” “Bitcoin,” and “Twitter” don’t mean the same as they once did. “Streaming” had an entirely different meaning even five years ago, and words like “bae” or “turducken” were unheard of. Even “meh” counts as an acceptable word now.

However, when words aren’t used that often anymore, they are dropped from the newest books to make room for recently created words and phrases. Here is a short list of some of the words and phrases that we will probably lose in the near future. 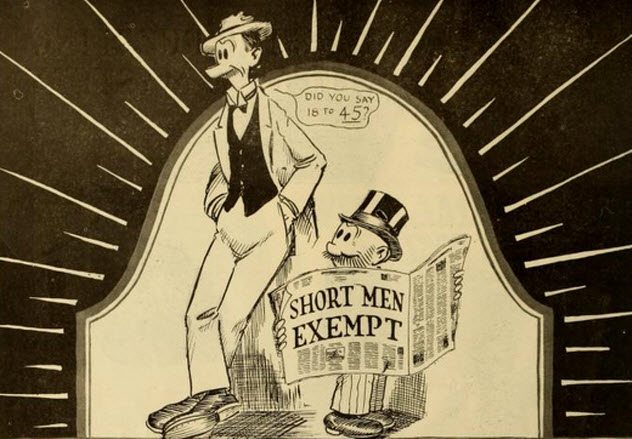 Mutt and Jeff was a comic strip that began in 1907. Created by Harry Conway “Bud” Fisher, who had started out as a sports cartoonist for the San Francisco Chronicle, the comic strip was based around the characters Augustus Mutt and Jim Jeffries.

The term “Mutt and Jeff” refers to two people who are polar opposites, usually one tall and one short or one heavy and one thin. Other examples are Abbott and Costello, Yogi Bear and Boo-Boo, and Laurel and Hardy. The term became a catchphrase for two friends or coworkers who couldn’t be more different from one another.[1] 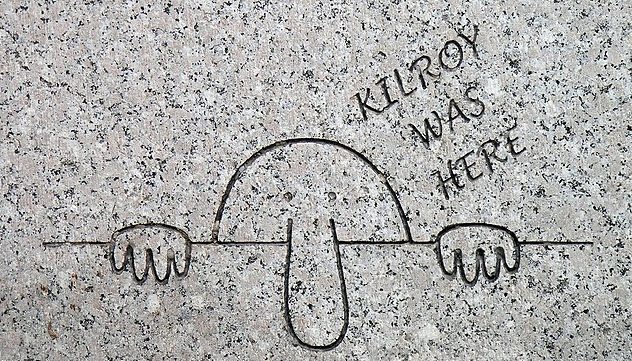 During every battle of World War II and the Korean War, there was always a soldier who would be the first to show up, the first to take up arms, the first to run headlong into the enemy lines. He became known as “Kilroy,” and a cartoon of a face peering over a fence became the symbol of this “super soldier.”

Many different legends exist about the origin of “Kilroy was here,” but the most likely concerns James J. Kilroy, a shipyard inspector who was tasked with checking the rivets on newly constructed warships. He would sign “Kilroy was here” on some unobtrusive part of the ship to show that he had inspected that area. After a while, he also left a sketch similar to the one above.

The soldiers who were transported on those ships saw the cartoon and had no idea where it came from. Since Kilroy had been there first, they decided that it was up to them to pass the drawing around to the most unlikely places they could find.

“Kilroy was here” is reportedly written at the bottom of the Arc de Triomphe, on the arm of the Statue of Liberty, in the dirt on the Moon, and even in an outhouse that had been set up for the meeting of Churchill, Stalin, and Truman at the Potsdam Conference in 1945. Stalin was the first of the group to use the outhouse. After leaving it, he turned to his aide and asked, “Who is Kilroy?”[2] 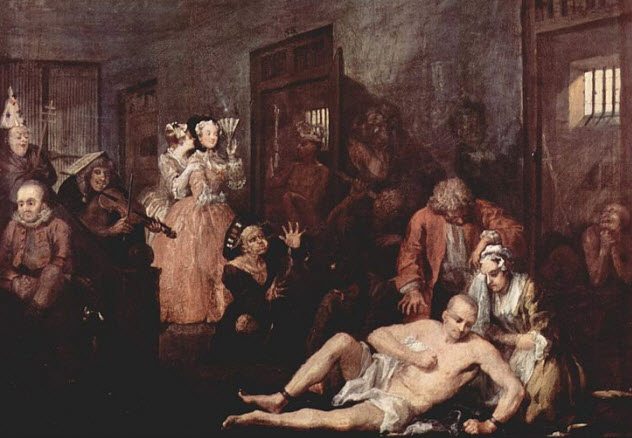 The word “bedlam” is used to signify a situation that is completely out of control, chaotic, and possibly dangerous.

It originated from Bethlem Royal Hospital, one of London’s most notorious insane asylums, which became known as “Bedlam.” Bethlem Hospital had been opened in 1247 and was built directly over a sewer that frequently flooded.

The hospital wasn’t so much used for the treatment of the mentally ill, but more as a way to raise money (“alms”) for the Crusades. By 1330, the building became an actual hospital rather than a holding area, and by 1377, it was strictly used to house and treat the mentally ill.[3]

Around the 1600s, control of Bedlam was switched from the church to the state. Over the years, all kinds of unusual and dangerous experimental techniques were used on patients. For example, a patient might be strapped in a chair suspended from the ceiling and spun in a circle until he vomited.

Patients were beaten, starved, burned, and given poisons as methods of treatment. Many did not survive, and mass graves were later found on the property. Bethlem Royal Hospital is still operational, and doctors and nurses now do everything they can to help the people who need their care. 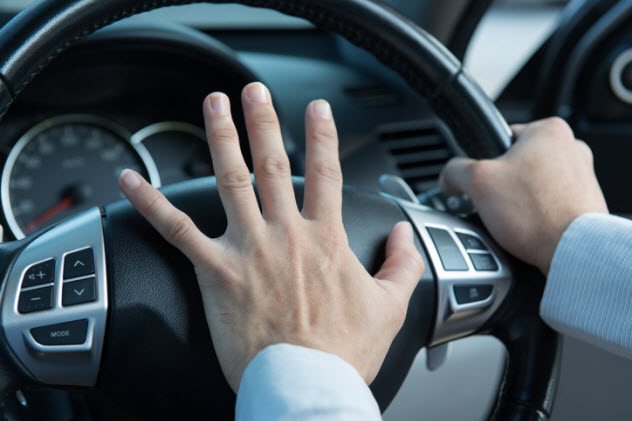 “A New York minute” is an instant. This phrase was meant to imply a very fast lifestyle or things that happen in a flash because New York City is considered to be a fast-paced place to live.

Television host and celebrity Johnny Carson once joked that a New York minute was the amount of time it took between the traffic light turning green and the guy behind you honking his horn.[4]

The saying is believed to have been used for the first time in Texas around 1967. It reflected the amount of time it would take a New Yorker to do something as compared to a Texan. What a New Yorker can do in an instant, a Texan takes a minute to complete. 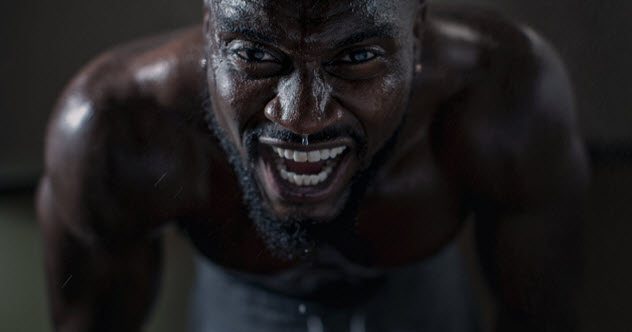 “Blood, sweat, and tears” refers to someone giving their all for a particular purpose, something that requires exhausting effort. It was believed that the expression was a variation of a phrase used by Sir Winston Churchill in a speech in 1940. He was warning the people of Great Britain of the trouble that was coming in World War II: “I have nothing to offer but blood, toil, tears, and sweat.”

Actually, though, the first time the expression shows up in print is attributed to a sermon written by Christmas Evans, which was translated from Welsh to English in 1837: “Christ the High Priest of our profession, when he laid down His life for us on Calvary, was bathed in His own blood, sweat, and tears.”[5]

Italians and French have their own versions of the saying as they are Christian nations as well.

In 1967, musician Al Kooper used the phrase for the name of his new jazz-rock band. At least 140 different musicians have been members of Blood, Sweat and Tears at one time or another. 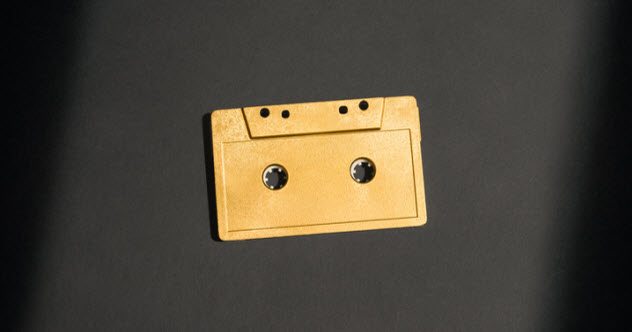 The cassette is an analog magnetic tape recording format, originally known as the Compact Audio Cassette. It was created in 1963 by Philips, a Dutch technology company. There were two different forms—blank cassettes for recording music and the spoken word or cassettes that were prerecorded.[6]

Cassettes were originally meant to be used in dictation machines, but improvements to the system made them more popular than 8-track tapes or reel-to-reel recording machines. Cassettes were also found to be useful for data storage in early microcomputers.

The first cassette player made to fit in a car dashboard was designed in 1968. From 1970 to the early 2000s, cassettes became one of the two most common formats, alongside the vinyl record (LP) and then the compact disc (CD). The only problem with cassette tapes was that the tape would become stuck in the machine if the player started to lose power. You would need to carefully remove the tape and then use a pencil or a screwdriver to rewind the tape onto its spool. 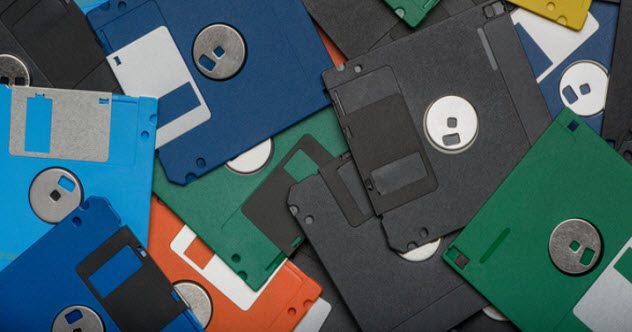 A floppy disk is a magnetic storage medium for large amounts of computer data, comparable to the flash drive we use today. You write a disk or read one with a floppy disk drive. They were the most commonly used data format from the late 1970s all the way into the 1990s.

Work on the first floppy disk system was started by IBM in 1967 in San Jose, California. The disks came in several sizes, with 5.25-inch being the most popular. Other sizes were introduced over time with limited success.

They were popular for nearly 40 years. But floppies started to lose their appeal in the 1990s as high-speed computer networking and the USB thumb drive became more convenient. Now floppy disks are only used with older hardware and industrial computer equipment.[7] 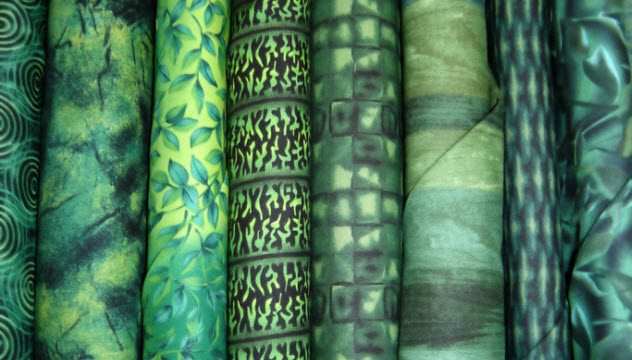 Way back before you could walk into any department store and buy clothing off the rack, clothes needed to be made by hand. “Yard goods” is the term for cloth, plastic, and other materials bought by the yard for use in clothing or home goods.

After cloth is loomed or woven, it is generally rolled onto a cardboard core. In general, fabric can vary in width from 5 centimeters (2 in) to 183 centimeters (72 in), with an average of two yards of 137-centimeter-wide (54 in) cotton fabric needed to sew a woman’s size medium shirt.[8]

Different fabrics were used to make curtains, upholstery, waterproof tablecloths, and even bath scrubbies. In the past, Halloween costumes were made by hand, too. Most major retail stores across the country had a yard goods department featuring various bolted fabrics and notions like buttons, zippers, thread, and patterns.

Craft and fabric stores such as Jo-Ann Fabrics, Fabric Barn, and Michaels sprang up across the country. They remained popular until the mid-2000s when it became cheaper to buy clothing than make your own. Yard goods are still readily available online from various suppliers. 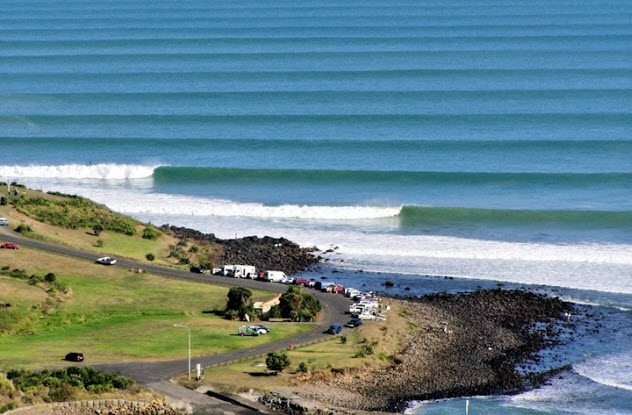 The word “swell” has taken on many meanings over the years. In the 18th century, swell meant “arrogant” or “pushy.” By the early 19th century, it was commonly used as an adjective and had taken on the meaning “distinguished” or “stylish.”

Around the 1920s, the word “swell” was an adjective that meant something that was perfect. By the 1930s, the word was being used differently. It meant anything from “excellent” to “that’s fine.”[9]

As a verb, it has always meant to expand or increase in size or intensity. As a noun, it can also refer to long, rolling waves in the sea. These days, the word “swell” is rarely used except as a sarcastic comment or in an ironic sense, as in “The washer is leaking? Oh, swell.” 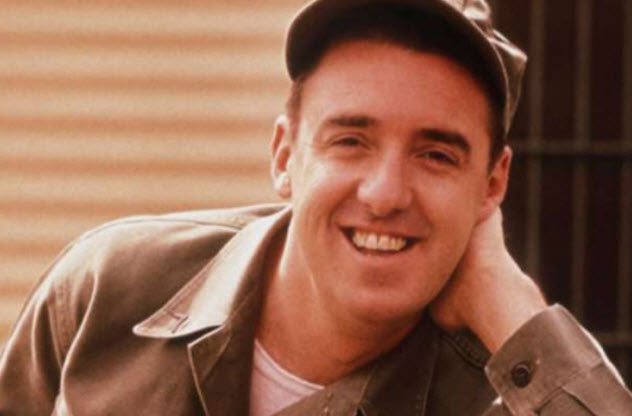 The word “golly” has quite a history. It is one of a trio of interchangeable words—“golly,” “gosh,” and “gee.” Originally recorded around 1775, “golly” and “gosh” were euphemisms (“substitute expressions”) for the word “God” and “gee” was a euphemism for Jesus.[10]

These days, “golly” is meant to express mild surprise or wonder without swearing. It was a common expression from the 1940s to the late 1970s. Its popularity grew in 1964 when Jim Nabors (as TV character Gomer Pyle) frequently used the word in everyday speech on The Andy Griffith Show and its spin-off series, Gomer Pyle, USMC.

These days, “golly” is rarely used as society has lessened the restrictions on swearing.

Joan is a little old lady gamer and constant reader.

Read about more words and their fascinating origins on 10 Words That Originally Meant Something Really Different and 10 Amazing Histories Behind Common Words.