They cling to small islands and show up in strange places. Most are old enough to no longer have a name. How ancient settlements sank or survived can be telling about the enduring battle between ordinary people and the forces of nature.

Found among these ruins, the simplest artifacts can rewrite the past and mysteries are never far away. But not all discoveries patch up the past. Sometimes, they rip apart carefully woven history and scholars’ reputations.

10 Village Under The Seabed 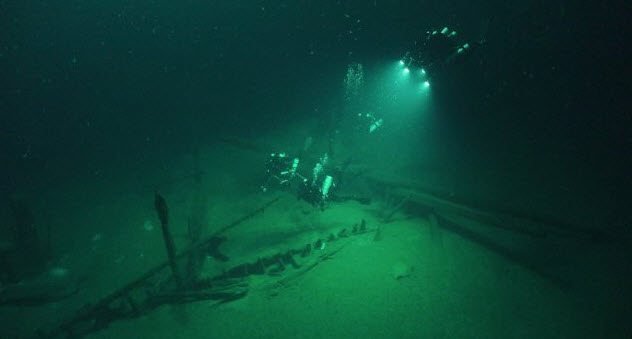 When marine archaeologists got involved in the Black Sea MAP project, they found a collection of 60 ships from different eras. Beginning in 2015, the project searched the Black Sea off Bulgaria’s coast. The submerged fleet (which grabbed all the headlines) was not the only thing discovered. The initial purpose of MAP was to determine how ancient communities responded to climate change.

In 2017, signs of such a village were found beneath the waves. During the Early Bronze Age, it was a coastal settlement. But today, the village is buried beneath the seafloor.

It was clear how the inhabitants responded. As warming weather turned the valley into a bay, people abandoned their homes to the rising seas. Using remote sensing, among other techniques, the ruins were located near the mouth of the Ropotamo River to the south.

Good old-fashioned excavations hit the village 2.5 meters (8 ft) down. Among the artifacts recovered were pottery, house timbers, and the remnants of hearths. The bay was not entirely abandoned. Realizing its sheltering potential, it was successively used by Greek, Byzantine, and Ottoman mariners.[1] 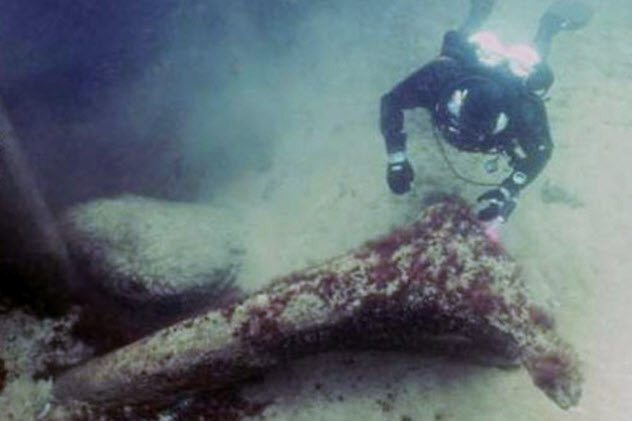 In 2014, another site was found beneath the waves. This time, it was in the Baltic Sea near Sweden and, luckily, not underground. The media quickly used the name “Sweden’s Atlantis.”

At 11,000 years old, it roughly matched the drowning of the real Atlantis, which was said to have bubbled under around 9600 BC. When artifacts surfaced, they were perfectly preserved. Long ago, peat decomposed and left sediment that resembled black gel. Called “gyttja,” it prevented oxygen (and thus decay) from reaching the items.

There were no pillars from a mythical city. Instead, the haul, found at a depth of 16 meters (52 ft), was more of a dumpster. Nomads discarded tools, antlers, wood, ropes, and carvings. There were also animal bones, including those of aurochs, an extinct cattle species.

It would appear that people used a lagoon in which to hide their trash. This prehistoric pollution got the thumbs up from researchers. Had the dumpster been on land, the rope and bones would have been long gone. Eventually, the sea claimed the site, which is now viewed as one of the first permanent settlements in Sweden.[2] 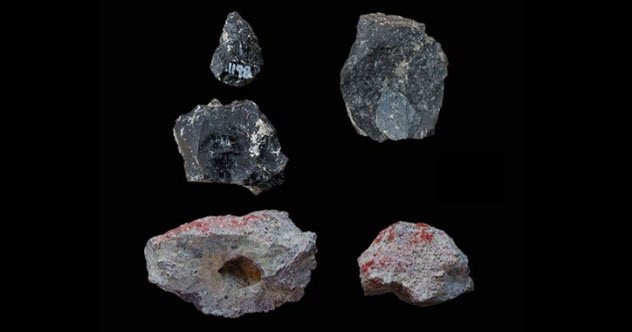 A 2018 dig in Kenya puzzled Smithsonian paleoanthropologist Rick Potts. Odd lumps turned up at the Olorgesailie Basin site where he’d been digging for years. Previously, his team had identified an ancient presence through stone tools and animal bones.

All told, 86 lumps were found together. They were round and colored black or red, but this was no checkers set. A laboratory run showed that the rocks were the world’s oldest paleo-crayons.

It sounds like a victory solely for historians who love crayons, but the discovery rewrote the tale of trade. The nearest geological signature matching the lumps was 29 kilometers (18 mi) away. Between the two areas stretched discouraging terrain that no one would have traveled on a whim. The only sensible “bridge” was the existence of a trade network.[3]

In a dramatic leap, the 300,000-year-old scribblers pushed human exchange back 100,000 years. The suggestion of earlier trade was backed up by stone tools from the same site. Like the pigments, their material came from elsewhere and was considerably older than the first traces of humans in eastern Africa, which was about 200,000 years ago. 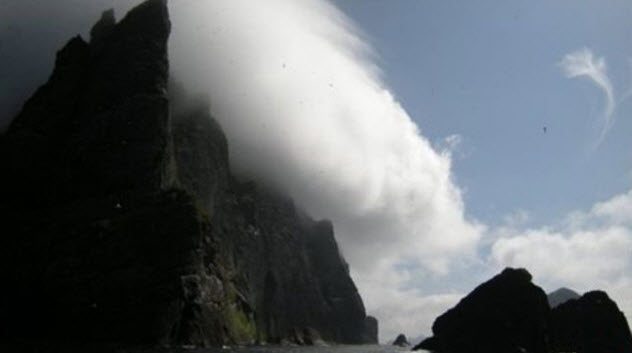 The St. Kilda archipelago harbors several islands. One of the most remote is Boreray isle. This piece of Scottish turf was occasionally visited by people looking for bird dinners and to shear feral sheep. Researchers believed that the island’s inhospitable nature was likely the reason anchors did not drop permanently.

During a five-year project that closed in 2011, they found an Iron Age community that did exactly that. Even more surprisingly, they chose to farm Boreray isle. The islanders left behind vast terraces and an agricultural field system. The settlement’s remains also included a complete building buried inside one of three mounds.[4]

It is not certain when the settlers drifted over to the island or why. Boreray’s starkness must have made life hard, but they stayed for a long time. If anything, the inhabitants proved the tenacity of ancient farmers. 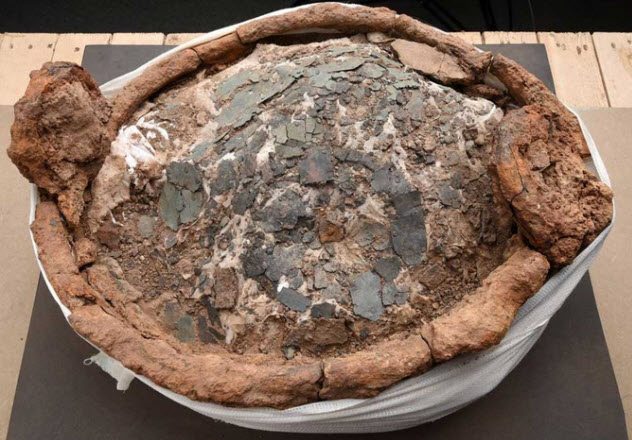 Located in Leicestershire, England, Glenfield Park comes layered with ruins from the fifth to the third centuries BC. There are many noteworthy aspects, but what sets Glenfield Park apart are the buried cauldrons.

Ancient cauldrons are rarely found in large numbers, but 11 surfaced at the site in 2017. Most formed a ritual ring around a building where they were buried, some upside down. More were found across Glenfield Park and were also underground.

The decorated artifacts were shaped from different parts of copper alloy and iron, their rims ranging between 36–56 centimeters (14.2–22 in) in diameter. Together, the cauldrons had a volume of 550 liters (145 gal).

This supports the belief that the settlement attracted gatherings for rituals and feasts. The cauldrons belonged to a cache of Iron Age metalworks scarce for its quality and variety.

Said to be unparalleled in the region, the artifacts included a sword, brooch, delicate dress pins, and a copper alloy “horn-cap” which may have been attached to a ceremonial staff. The cauldrons were valued possessions, and to bury them was likely a ritual to decommission certain buildings within the settlement.[5] 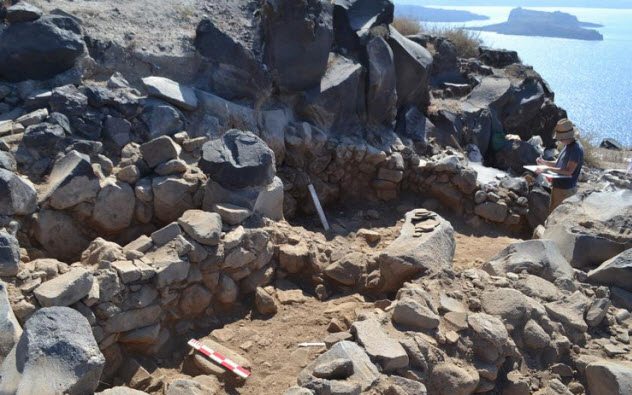 In 2017, a structure was found on the Greek island of Thirassia. Archaeologists cannot say who built it or why, but it was raised by people who abandoned the island for unknown reasons. The discovery was made near Thirassia’s ancient ruins.

While doing the stuff that archaeologists do, somebody noticed new structures—separate stone buildings connected by terraces. Their numbers suggested that the island was once home to a dense population.

After the homes were identified, one building remained without a clear purpose. Shaped like an oval and adorned with decorations, it held the echoes of a monument or temple. If this was a place of worship, nothing links it to a particular god, goddess, or even a known religion.

Archaeologists managed to capture its age as Cycladic Bronze Age (third to second centuries BC) by dating ceramics and stone tools within. Whoever the builders were, they also left behind big storage jars, crushing implements, bones, and shells. Cracking the purpose of the ornate building could add more substantial information about the region’s first cultures.[6]

4 Lavish Burials For The Disabled 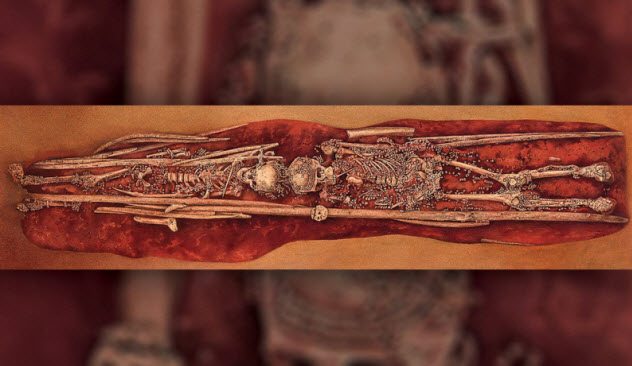 Around 34,000 years ago, hunter-gatherers buried their dead at modern-day Sunghir in Russia. One grave challenged the theory that ancient children were lesser citizens until they were old enough to contribute to the group.

Discovered around 1957, excavations unearthed 10 adults and two boys. The youngsters were placed head-to-head in a long, narrow grave. Approximately 10 and 12 years of age, the boys were covered in red ocher like everyone else.

But in 2018, a study showed that the similarities ceased in an unusual way. Both children were disabled. The younger was affected by deformed legs. The older adolescent was bedridden and ate only soft foods.

Researchers once assumed that such members were a burden within hunter-gatherer societies. However, the boys had been buried inside the richest grave. Over 10,000 beads and 16 spears, all made of mammoth ivory, 20 bracelets, deer antlers, carved art, and 300 fox teeth decorated the children.[7]

The adults, even young males able to contribute more, received less. Some burials had no grave goods at all. This suggested that people had more complex views about individual value than merely physical ability. 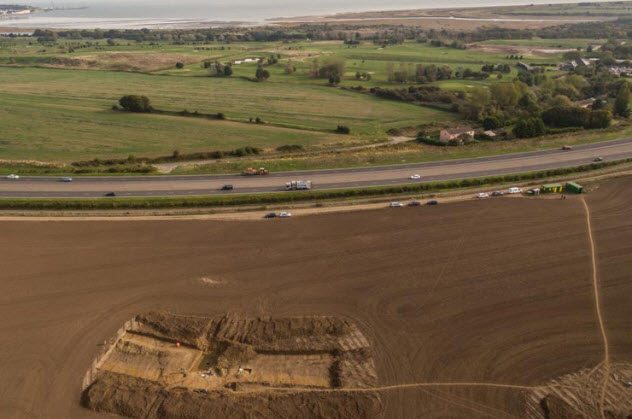 Usually, a rusty piece of metal won’t make anyone pop the champagne—unless you’re an archaeologist searching for physical evidence of Julius Caesar’s invasion of Britain. This famous event occurred in 55 BC. The Romans left no trace of their arrival at Pegwell Bay, the region where the army reportedly landed.

In 2016, excavations in the bay found a defensive ditch at Ebbsfleet. The nearby shore was one of the few places in Pegwell Bay that could have accommodated Caesar’s fleet, said to tally 800 ships.[8]

Inside the ditch, which was 1.8 meters (6 ft) deep, was the strongest evidence yet. Among human bones was a single pilum point (Roman spear). This surprising find was linked to a related point in history. Its style suggested that it came from northern Italy where Caesar recruited soldiers.

The first-century pilum also proved historians wrong. Many thought that Pegwell Bay could not be the place because a channel separated it from the mainland until the Middle Ages. Clearly, Roman engineers bridged the problem. 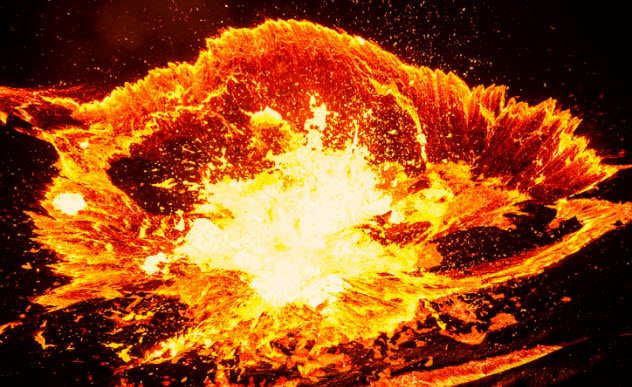 The “Toba eruption” happened when a supervolcano in Indonesia lost its temper 74,000 years ago. Toba released a mind-bending amount of material into the atmosphere and killed summer for years. Some scientists believe that food scarcity resulted and nearly killed off the human race.

Recently, volcanic glass found at coastal sites in South Africa added another angle to the catastrophe. Nine kilometers (6 mi) away from Pinnacle Point, a cave settlement, was an open area called Vleesbaai that was likely used by the same group. The glass matched Toba’s chemical signature.[9]

Excavations peeled through the different layers at each location. If the cold brought death to the coast, there would have been little sign of occupation in the levels after the glass.

However, researchers found that the population not only survived but also flourished. Their numbers increased, and toolmaking expertise shot to the next level. What protected this corner of humanity was probably a reliable source of seafood.

Their prosperity opens a broader possibility. Instead of global devastation, other communities along the coast may have found the same kind of refuge. 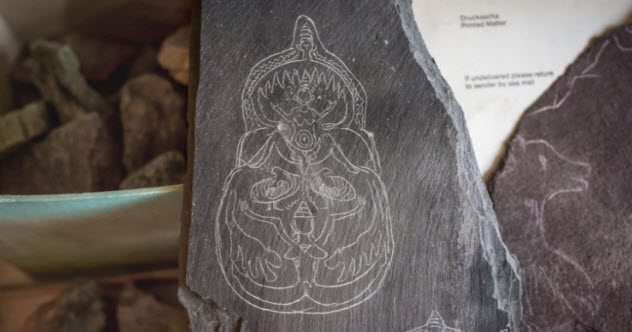 A world-famous site in Turkey is the 9,000-year-old Catalhoyuk, known for its vast ruins. James Mellaart, who died in 2012, became renowned as the man who discovered and produced remarkable studies on Catalhoyuk.

In 2018, colleague Eberhard Zangger visited Mellaart’s London apartment. To his dismay, he came upon several “test run” sketches of murals that Mellaart would later claim to have discovered at Catalhoyuk. There were also forged documents containing inscriptions in a language called Luwian.

This horrified Zangger, who was president of the Luwian Studies Foundation. He had loyally followed a postmortem request by Mellaart to publish some of the script. Among the documents was a handwritten draft in the language that Mellaart claimed he never understood. Not only was he fluent in the language, but he also infused 50 years’ worth of truth and fabrications to suit his theories.[10]

Back in 1962 when Mellaart first began publishing his discoveries in magazines, it was easy to get away with this kind of lark. The articles only contained descriptions or sketches, never photos. Mellaart’s thoroughness left a damaging legacy. It is nearly impossible to separate the forgeries from the authentic Catalhoyuk discoveries.

Read about the discovery of more ancient artifacts that are rewriting history on Top 10 Mundane Artifacts That Are Rewriting History and Top 10 Artifacts And Places Frozen In Time.