At some point in our lives, each of us has swallowed something we shouldn’t have. Perhaps it was a tiny piece of plastic, a bit of toothpaste, or even a whole tooth. Usually, this wouldn’t be a problem as things like this would simply slip through our digestive systems and exit, well, you know where.

Yet, the human body can handle so much more. When it comes to people’s intentions, different things can be shoved into different places. Of course, it can happen accidentally, but sometimes, it’s a deliberate action for sexual pleasure or criminal purposes. Stupidity will always find a way to amaze the world of medical science and entertain those who know better. 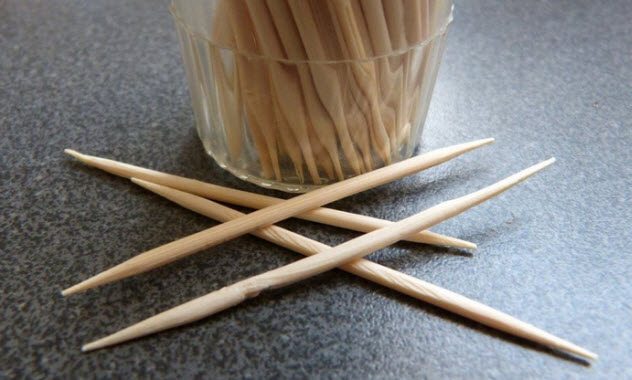 Recently, a 70-year-old woman from Australia had been visiting her local hospital on a regular basis complaining of severe stomach pain. After her fourth visit in April 2017, doctors decided to operate to see what was causing her so much pain.

They noticed that a piece of her colon was severely inflamed from repeated attempts to use the bathroom and immediately set about removing it. After it was finally cut out of her body, doctors were surprised to find a toothpick lodged inside it. Since the operation, the woman has fully recovered from her symptoms and is as healthy as can be.

Obviously, doctors never associate stomach pains with toothpicks. But more than 50 percent of the time, a patient never realizes that he’s swallowed such a sharp wooden splinter. Intoxication may be to blame for this, as most of the time it happens at a party with snacks on toothpicks.[1]

So next time you’re at a party, avoid the plate of cheese. It could potentially kill you. 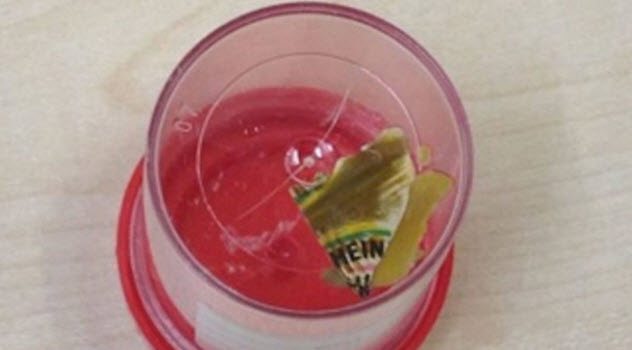 For six years, a 41-year-old woman thought she had a bowel condition known as Crohn’s disease, only to find out that it was a Heinz sauce sachet that had caused her symptoms. She suffered from bloating and crippling stomach pain up to three days at a time, prompting confused doctors to diagnose her with the serious disease. After a while, doctors realized that she wasn’t responding to treatment like she should have. So they decided to investigate via keyhole surgery.[2]

During the procedure, they found an inflamed mass piercing her small intestine. It turned out to be two pieces of a plastic Heinz sauce sachet. After removal, the woman was cured instantly, although she still argues that she didn’t tuck into a meal using that sauce sachet on the day that her symptoms started.

Doctors concluded that it was the first known case of a piece of plastic being responsible for causing a Crohn’s disease diagnosis. This goes to show that you can’t judge a book by its cover unless you delve deep into its intestines. 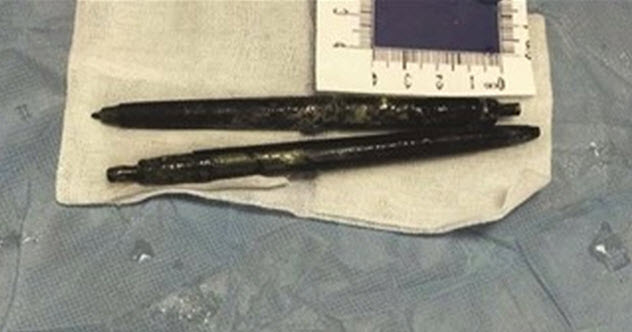 A man from China recently had two ballpoint pens removed from his stomach 36 years after he swallowed them on a drunken bet. Despite having the 11.9-centimeter (4.7 in) pens lodged in his digestive tract for over three decades, doctors thought they were already digested as they didn’t cause him any discomfort or produce any symptoms.

The operation to remove the pens took place in May 2017 at a hospital in Kunshan in eastern China.[3] The operation was a success. Perhaps he could have been the world’s first human Etch A Sketch. Now we’ll never know. 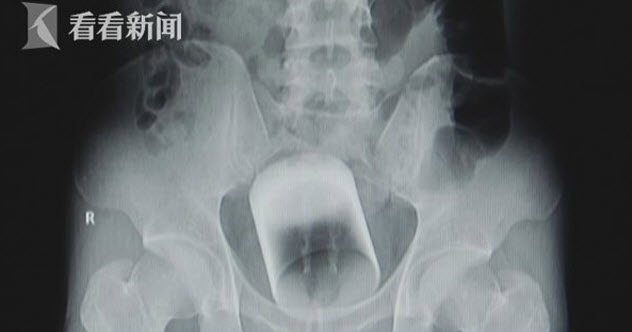 Back in China again, another man took body shots a bit too far. Apparently, the man had the glass stuck in his anus for two days in late 2017 before he was rushed to a hospital. During those two days, he tried to remove it himself using a variety of tools and ways, only to have it break into separate chunks because of the intense swelling.

Hence, he was rushed to the hospital. The tumbler measured 7 centimeters (2.8 in) in diameter. Doctors failed to remove it by hand, so they scheduled an emergency abdominal operation to take it out.

Much to the man’s relief, doctors successfully removed the glass. How the glass wound up in there remains unknown. The man has since made a full recovery and didn’t sustain any injury from the broken glass.[4] 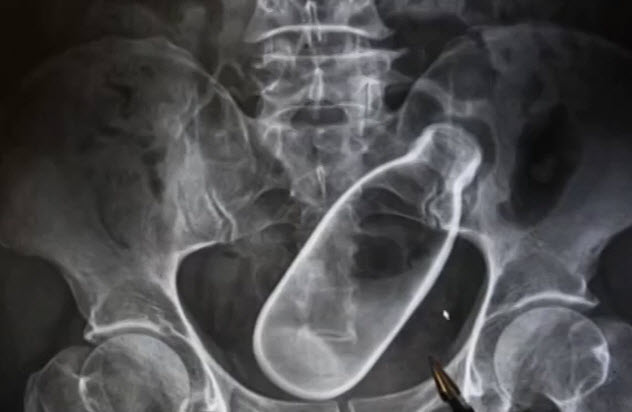 In 2014, a 60-year-old man in China was desperate and frustrated by his constipation. So he shoved an entire bottle of laxatives up his rectum, obviously exceeding the recommended dosage. He thought that he could use the entire bottle as a stimulant to relieve himself of his stubborn bowel movements.

Needless to say, he failed miserably. The man went to a hospital to have the bottle removed after it became fully lodged inside his anus. Luckily, doctors took the bottle out without causing any damage, but the X-rays went viral after the physicians’ colleagues shared them on social media.

The hospital officially released the X-rays to the public once the poor guy’s records were wiped from their systems.[5] 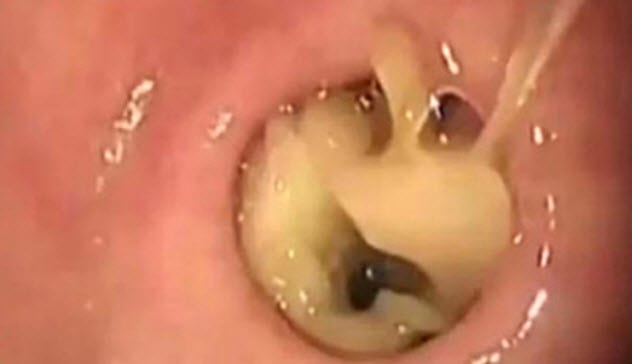 In early 2017, an assortment of mushrooms had to be removed from the stomach of a 50-year-old woman because she didn’t chew them properly. Surprisingly, the mushrooms actually started to grow inside her stomach.

In fact, it was the perfect environment—dark and damp—for the fleshy, fruiting body of a fungus to thrive. Some of the mushrooms had grown to the staggering size of 7 centimeters (2.8 in) long!

The mushrooms became stuck because the woman had cooked them without soaking them and then swallowed the mushrooms whole. Soon she began suffering from stomachaches so severe that she had to go to a hospital.[6]

Doctors operated and managed to safely remove the mushrooms. The woman has since made a full recovery. 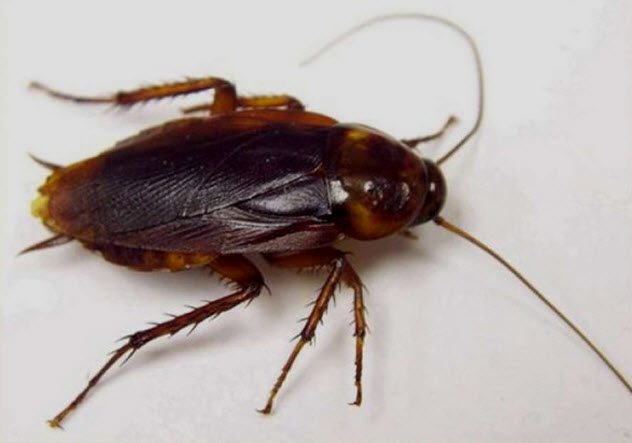 They are the kitchen culprits we all love to hate and often the reason behind a man’s girly squeal. But what if one of them ventured where no roach had ever dared to go? Perhaps . . . your skull.

In early 2017, a 42-year-old woman from India woke up to tingly, crawling sensations in her right nostril. Thinking she was simply catching a cold, the domestic worker tried to go back to sleep, only to be plagued by different movements inside her nose.

She spent the rest of the night awake, waiting for the morning Sun to appear on the horizon before she could go to a hospital. She suspected the problem to be an insect of some kind as every movement made her eyes burn.

The woman was referred to three different hospitals before doctors scanned her skull and discovered an apparent “mobile foreign body.” Finally, they used an endoscope to find the cockroach in the skull base, right between her eyes and dangerously close to her brain.

Doctors quickly used forceps and suction devices to remove the annoyance. After 12 hours, the bug was safely extracted and surprisingly still alive. Doctors were actually relieved to find the insect still alive as it could have caused a deadly infection if it had died.[7] 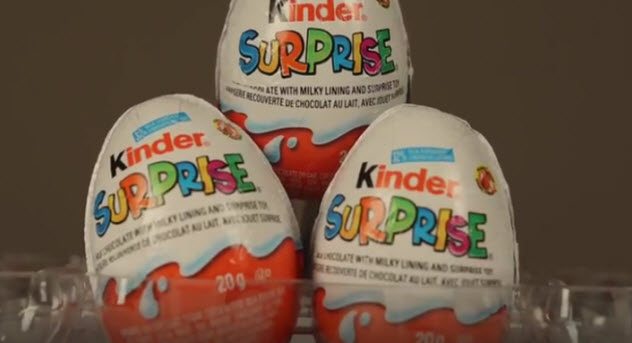 Damian O’Reilly, a 20-year-old known drug smuggler, hatched an idea that would make him a fortune. Since drugs sell for 10 times the street value in prison, all he had to do was find a way to get sent to jail and smuggle in the drugs. He “hooped” (a slang term used in prison for hiding contraband in your rectum) 8 Kinder Surprise Eggs filled with marijuana, matches, tobacco, and rolling papers and set about his plan.

Since he was already on probation, he thought that a simple throw of a rock at a police cruiser would get the job done. He got arrested in minutes and was immediately sent to jail where he was to be held for bail.

Then things started to go south. A guard was suspicious that O’Reilly was smuggling drugs and sent him to a “dry cell” (a cell without any plumbing). The guards kept an eye on him and waited for the contraband to be expelled one way or another. Then the guards planned to seize it.[8]

When O’Reilly couldn’t handle the discomfort anymore, he removed the eggs himself and was later found guilty of drug trafficking. He finally got his wish and was sentenced to two years in prison. 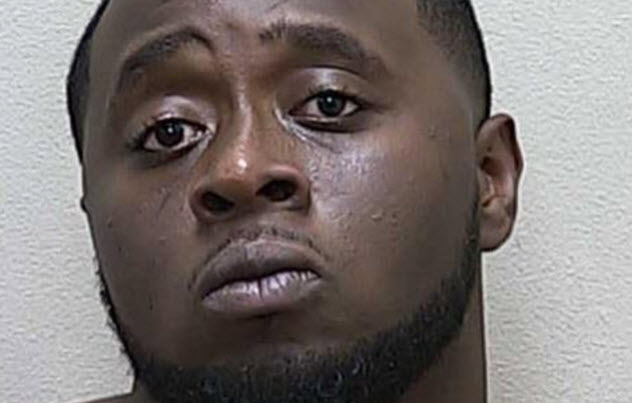 In 2017, a 26-year-old man in Florida stuffed over $1,000 in drug money up his rectum to hide it from the police. The man was with his seven-month-old child when he was pulled over for a routine traffic stop. An officer noticed the smell of marijuana coming from within the car.

Officers then removed the man from his car and searched for any drugs. They discovered 197 grams of meth, rock cocaine, and four grams of heroin. They also found a scale, a large amount of cash, and marijuana.

Once the suspect was taken into custody at the local police station, officers realized that the money they had recovered from the scene was missing. Though the suspect insisted that he had already forked over the cash, a strip search later revealed where he was hiding it.[9] 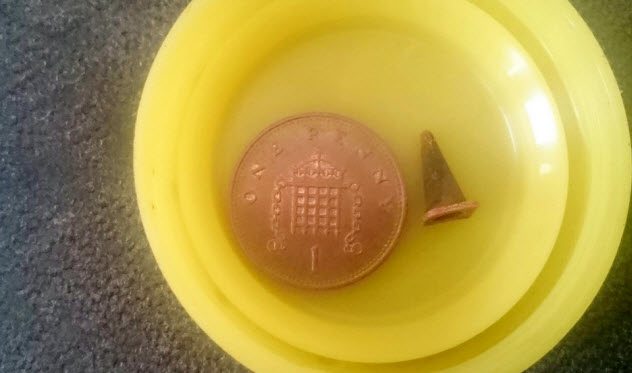 Toys usually end up in a child’s mouth at some point or another, but it was a different story for a certain postman from Croston, Lancashire. Paul Baxter, an ex-smoker, was suspected to have lung cancer because he was coughing up yellow fluid for more than a year. Doctors had found a mass in his lungs 20 years earlier and had tried to remove it but missed.

Then, in late 2017, they inserted a tiny camera into his lungs to see what it was, only to burst out in laughter. Expecting to find a malignant growth, they found a toy traffic cone belonging to a Playmobil set instead. They removed it under local anesthetic, and the postman has kept it as a souvenir of his ordeal ever since. He claims that it’s still in “working order” because you could even see the different markings.

Baxter said that the cone came from a Playmobil set he got on his seventh birthday, although he can’t remember inhaling it. That’s a whopping 40 years in which that cone was stuck in his lungs, with symptoms only showing recently. Paul has made a full recovery from his symptoms and is living a healthy life with his wife and two children.[10]

I am an aspiring college student with a love for everything involving modern technology. I’ve been a gamer at heart for as long as I can remember, and I enjoy writing articles and fan fiction.

For more fun facts about human anatomy, check out Top 10 Human Body Parts Displayed In Museums and 10 Fascinating Facts About The Human Skeleton.