This year marks the 100th anniversary of the end of World War I (1914–1918). By 1914, the airplane was barely a decade old but it already held the potential to revolutionize warfare.

Air combat during those brief four years resulted in one of the steepest technological and tactical learning curves in history. Here, we investigate 10 weird realities that shaped the war in the skies over Europe.

10 Grappling Hooks Were Used As Weapons 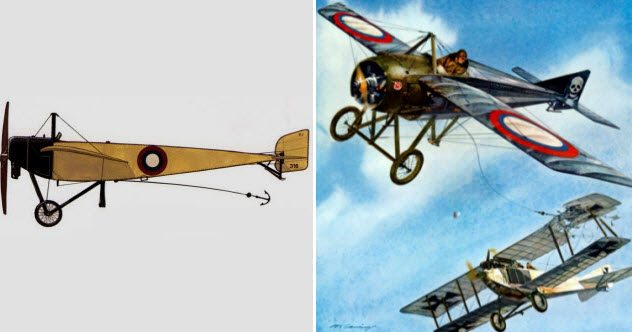 Air combat in World War I was in its infancy, and all kinds of wacky ideas were attempted to gain the upper hand over the enemy. Early aircraft were slow, fragile, and primarily used for scouting. But that didn’t stop the pilots of opposing sides from “having a go” at each other.

Normally, this amounted to taking potshots with pistols, but sometimes, the pilots got creative. They would throw bricks or hand grenades at each other, and some would even try to ram enemy planes. This tactic was first employed by Russian Pyotr Nesterov to claim the first aerial kill of the war. Unfortunately, his plane broke apart in the process and he died of injuries sustained in the crash.[1]

His countryman and marginally less suicidal colleague, Aleksandr Kozakov, became tired of the lack of weapons on his plane. So, in March 1915, he experimented with the use of a grappling hook to pull enemy planes apart. (At this time, planes were made of wood, canvas, and wire, so this wasn’t quite as silly as it seems.)

When he attempted to test his plan, it failed. So he did the only sensible thing remaining and rammed his aircraft into the enemy. Unlike Nesterov, Kozakov and his plane survived the collision. A generation later, the Russians had turned their peculiar ramming habit into a distinct part of their air combat strategy with a tactic known as taran, but that’s another war and another story.

9 Some Pilots Used Rifle Sharpshooting To Down Enemy Planes 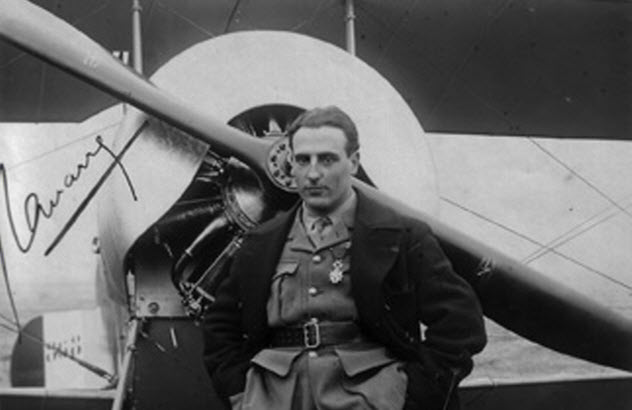 With all the ingenious (and not so ingenious) ideas bouncing around military aerodromes in 1914, it wasn’t long before pilots began taking rifles with them in the cockpit. Some of the earliest aces of the war, including Frenchman Jean Navarre and Englishman Lanoe Hawker, used this tactic.

Hawker became infamous among German pilots for his uncanny accuracy with his antiquated Westley Richards .300 single-shot deer-stalking rifle. Such was his accuracy that he could bring down enemy aircraft with a single shot, killing the pilot or critically damaging the engine.

The crack of the rifle could barely be heard above the noise of the engine, and German planes would appear to tumble out of the air for no reason. The fact that Hawker regularly took on machine gun–armed aircraft makes his feat all the more remarkable.[2]

Of course, this begs the question: “Why weren’t all aircraft fitted with machine guns from the outset?” After all, the machine gun had been around since the middle of the previous century. 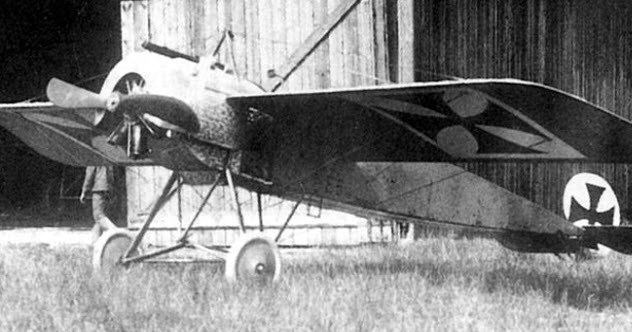 One of the drawbacks of a canvas-and-wood aircraft is that there are limited places to put a machine gun. Wings were too flimsy, so only the fuselage was feasible. And then there was the propeller. If you wanted a forward-firing gun, how would you shoot without shredding it to bits?

One solution was to put the propeller behind the pilot in a “pusher” configuration. But this principle had drawbacks because it significantly reduced the engine power.

Some pilots tried fitting a machine gun pointing 45 degrees into the air so that it cleared the top of the propeller. This was difficult to aim, but it didn’t stop British ace Lanoe Hawker from shooting down three enemy aircraft in one engagement. As the first triple kill of the war, it earned him Britain’s highest honor—the Victoria Cross.

Another solution was to fit the propeller with metal deflector plates to bounce the bullets off. This was first used by France’s Roland Garros in early 1915, but the obvious danger of random ricochets was hardly ideal.

The breakthrough came from Anthony Fokker with a revolutionary “interrupter gear” which prevented the gun from firing when a propeller blade obstructed the line of fire. It took several months for the Allies to develop their own, and the edge that this gave the Germans caused a high death toll among Allied pilots.[3]

This period became known as the “Fokker Scourge.” Despite this, Allied pilots had more to worry about than pesky German bullets.

7 More British Pilots Were Killed In Training Than In Combat 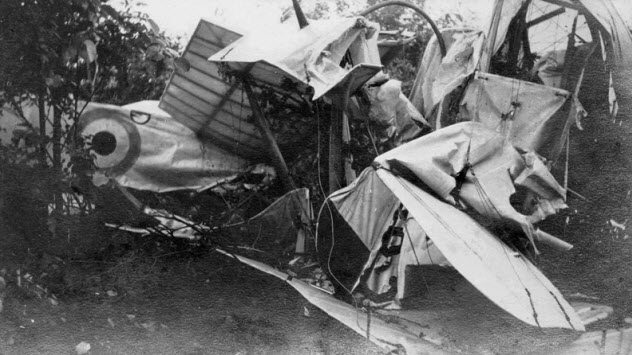 For the majority of the war, more British aircrew died in training than in combat. In fact, training was so dangerous that British flying instructors nicknamed trainee pilots “Huns” (the slang term for Germans at the time) because they were perceived to be as dangerous as the enemy.[4]

Although roughly half of all British pilots were killed in training, the Germans only lost a quarter. This may still seem high, but even in peacetime, flying in the early 20th century was notoriously dangerous.

6 Pilots Had A Strong Sense Of Chivalry 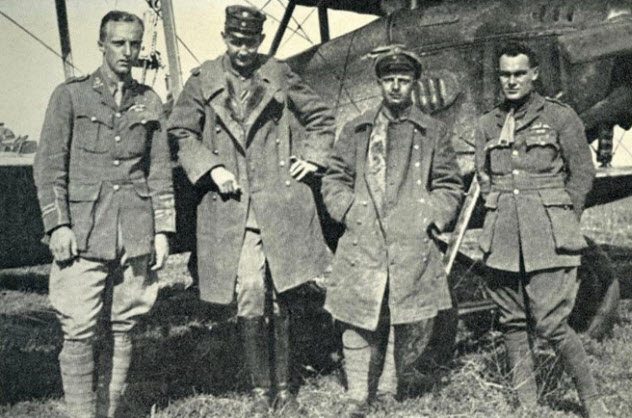 When a lone British two-seater was set upon by seven German aircraft, there was little hope of survival. The crew, Justin McKenna and Sydney Sutcliffe, fought valiantly and managed to down four of the German planes before they were shot down and killed.

But the story did not end there. Impressed by the gallantry of the two young men, a German pilot risked his life by flying over British lines to deliver a note confirming their deaths to the British. (This was not a one-off, either.) The Germans then arranged a funeral with full military honors, inviting British prisoners of war to attend and ensuring that photographs of the event and details of the pair’s heroic last stand got back to their families.

Great respect for those killed in action was routinely observed by both sides. When the “ace of aces” Baron von Richthofen (aka the “Red Baron”) was killed in April 1918, Australian troops held a similarly respectful funeral—only fitting for the most recognizable pilot of the war.

This respect extended to the living, too. When British pilot Gerald Gibbs shot down and captured a German aircrew in 1918, he treated them to lunch. The German captives then sent him “fan mail,” requesting autographed photographs as “a reminder of the brave and quixotic adversary” who had downed them.[5] 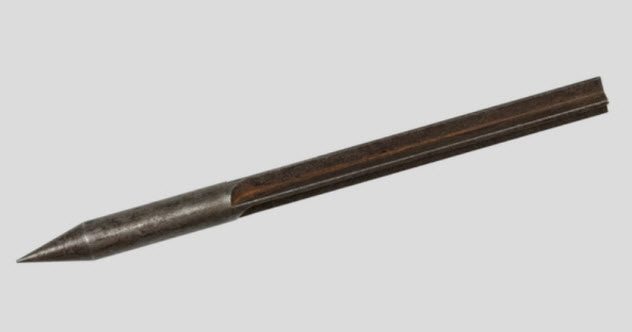 Unfortunately, like the knights of old, chivalry can only go so far and the brutal reality of war is ever present. Therefore, while many airmen had a healthy respect for their enemies, they were also devising brutal ways of killing them.

In the days before purpose-made bombs, aircraft would drop hundreds of sharpened metal darts, known as flechettes, on the trenches below. They were first used by the French, but it wasn’t long before the Germans and British joined in.[6]

These darts fell like metal rain, terrorizing the men on the ground. Combined with the “chivalry” of the skies, these oddly primitive killing devices gave the war a strange medieval quality. 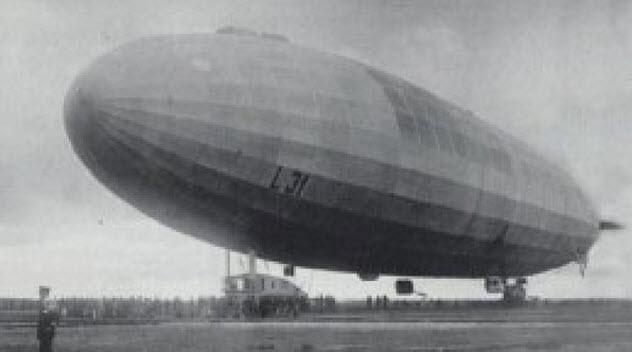 With death raining from the skies on the front line, it wasn’t long before it reached the “home front.” In the age of drones and precision bombing, civilian casualties from air strikes are now common. But like so many things in the Great War, aerial bombing of civilian targets was a new and terrifying development that shocked the world.

Airships may be used for harmless advertising now, but at the turn of the 20th century, they were cutting-edge military technology. Named after a German army officer, zeppelins were massive airships sent to bomb British cities. They were initially successful, but the speedy development of technology during the war meant that they were soon obsolete and vulnerable to attack.[7]

Zeppelins were replaced by bomber planes like the formidable Gotha. But the precedent of aerial bombardment had been set, and warfare would never be the same again. In total, over 1,500 British civilians were killed by air raids during the war, an ominous foreshadowing of what was to come just a generation later in World War II.

3 Quadruplanes Were Designed To Hunt Zeppelins 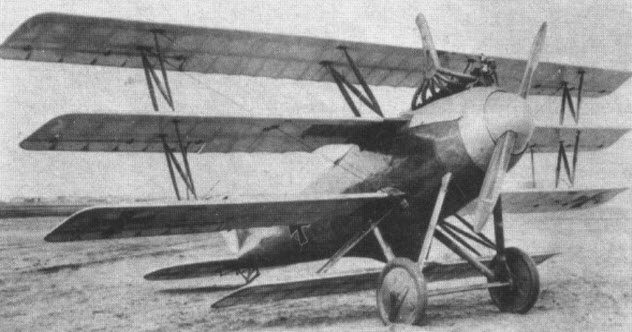 When we picture the first great air war, most of us imagine biplanes swirling around in vicious dogfights above the trenches. Many of you may also know that monoplanes and triplanes were used routinely by both sides, the latter made famous by the legendary Red Baron.

But did you know that quadruplanes (planes with four sets of wings) were also used? In fact, some quadruplanes were specifically designed for hunting airships. Their increased wing surface area aided them at the low speeds required to attack the slow-moving vessels.

Both the British and the Germans experimented with quadruplanes during the war, but the idea never really took off, with most models underperforming.[8] 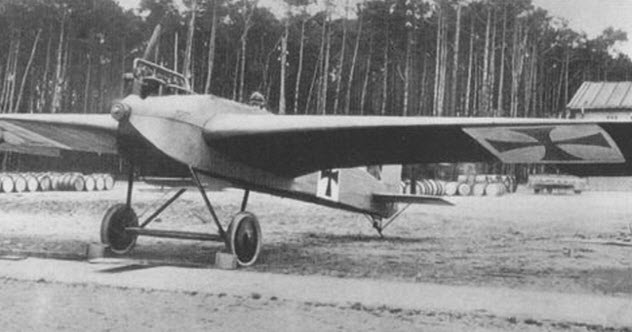 A concept that was more successful was the metal airplane. Today, we take metal airplanes for granted. But in 1914, engines were much less powerful and canvas and wood had to be used to reduce the weight.

Like the interrupter gear, the Germans were the first to develop an all-metal plane in 1915 with the Junkers J1.[9] At the time, this challenged ideas of aeronautical engineering because sheet metal was viewed “with a certain disregard.” This was revolutionary in 1915, but it would be several decades before metal aircraft outperformed wooden ones. Yes, it’s true. German pilots consistently shot down between two and three Allied aircraft for each plane they lost. When you combine this with the much lower rate of training accidents and German technological innovation, you’d be forgiven for thinking that the Germans completely dominated the skies.

In reality, they were consistently outnumbered two to one.[10] By 1918, the Allies were producing nearly five times as many aircraft. The Germans countered the overwhelming numbers by concentrating their planes into massed units, known as “circuses,” which they moved around the front to gain air superiority where it was needed most.

Ultimately, it was in vain. On November 11, 1918, the Germans finally signed an armistice with the Allies, officially bringing the war to an end.

Roshan is a freelance writer and trained geologist with a master’s in climate change. In addition to his passion for science and the environment, he has a keen interest in history and is always on the lookout for an interesting story.

Read more bizarre stories about World War I on 10 Baffling World War I Mysteries We May Never Solve and 10 Bizarre Stories From The Great War.