Nature has the destructive power to topple, crack, and encase the strongest man-made structure. Nature also has a calm, peaceful power that allows it to grow unnoticed around humans.

The power of nature is unparalleled. When it is given the chance to thrive on the remains of human creation, it has the ability to take the neglected and forgotten and turn them into breathtaking sights. Here is a list of 10 extraordinary examples from all over the world of nature reclaiming abandoned places. 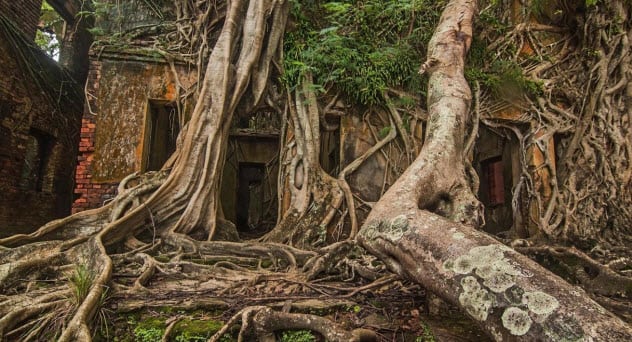 During the 19th century, the British started a settlement on Ross Island, part of Andaman and Nicobar Islands. The 0.3-square-kilometer (0.1 mi2) island was used as a penal colony for Indian mutineers, who were forced to clear the thick forests there. In 1942, high mortality rates due to waterborne disease and the fear of Japanese invasion led the British to abandon the island.[1]

Today, the Indian Navy does not permit civilian settlements on Ross Island. Therefore, large sections of the island are abandoned. Without human disturbance, the ficus tree roots have been able to grow around the remaining buildings and take back their land.

The marvelous roots engulf every inch of the abandoned structures, growing in breathtaking shapes in and around what used to be the homes of the island’s inhabitants. Visitors can explore the island’s undisturbed beauty, in stark contrast to its dark colonial past. 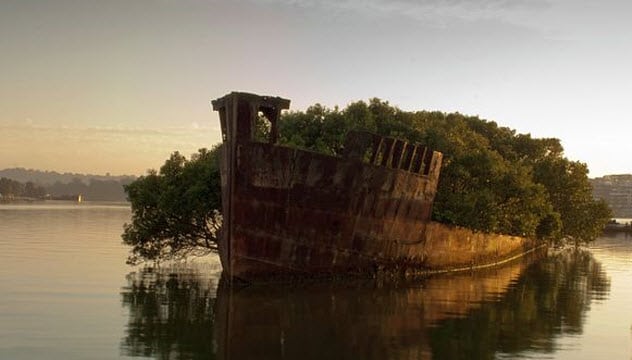 In Homebush Bay, Sydney, Australia, the SS Ayrfield can be found sitting in the shallow waters. The rusted hull of the ship floats peacefully, overflowing with gorgeous mangrove trees.

The vessel, which was brought to the bay to be dismantled, has gained the title of “Floating Forest” as a result of its graceful, flourishing flora. A popular tourist attraction, the 107-year-old ship is now protected from demolition by the Historic Shipwrecks Act 1976.

The SS Ayrfield was a steam collier that traveled between Newcastle and Sydney but became a supply ship for US troops during World War II. After the war, the vessel was no longer needed and was brought to Homebush Bay for demolition.

At the time, the bay was used for shipbreaking. However, shortly after the SS Ayrfield’s arrival, the shipbreaking company closed, leaving everything behind.[2]

Today, the ship can be seen floating in the bay, giving nature a platform on which to thrive. The SS Ayrfield is one of many ships in the bay, but it has rightfully gained the most recognition for its lush and magnificent foliage. 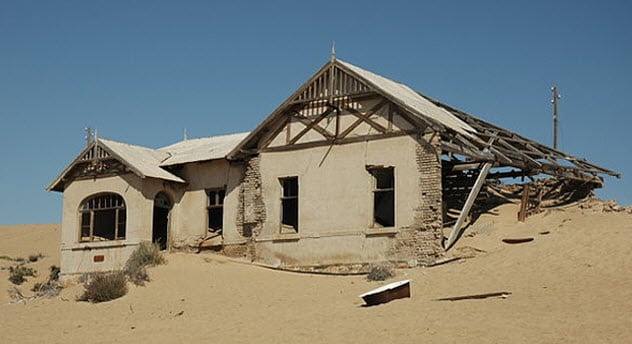 One of the best-known abandoned places in the world sits in the Namibian desert. Kolmanskop is a ghost town lost in time. After the town was abandoned in 1956, the natural forces of the desert caused sand to pile up inside the buildings, creating a unique and breathtaking sight.

A diamond mining town was established in 1908 after a rail worker discovered a diamond and showed it to his German supervisor. Miners began flocking to the town, eventually causing the diamond supply to become exploited and depleted.

The population decline began after World War I when a richer diamond deposit was discovered south of the town, prompting everyone to leave their homes. Nowadays, Kolmanskop receives enormous attention for its abandoned houses filled knee-high with sand. The town is still owned by the mining company, but tours of the ghost town take place daily.[3] 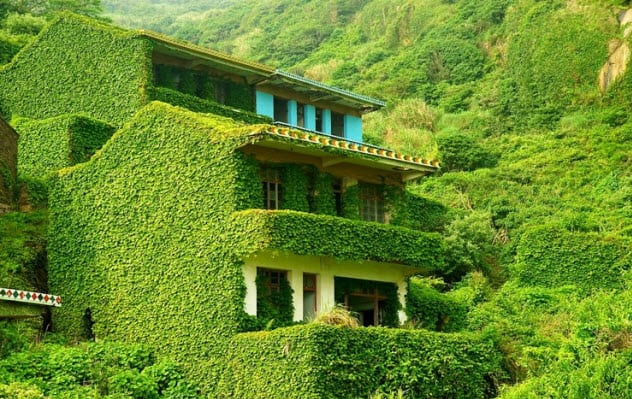 A naturally breathtaking island with tall mountain peaks and a beautiful coastline, Gouqi Island has been on a journey to eliminate all evidence of civilization from its land since the population began dispersing in the 1990s. Here, ivy and moss can be seen climbing up walls, taking over buildings, and hiding them from view.

The eerie allure of a city frozen in time has made the island a busy tourist attraction. If you are looking for greenery and neglected buildings, Gouqi Island is a must-see.

Gouqi Island is part of the Shengsi Islands in the Zhoushan Archipelago outside of Hangzhou Bay in China. The island relied heavily on fisheries as its primary industry in the past. Then the diversification and development of secondary industries caused fishermen to move to the mainland where transportation and distribution of goods was easier.

Some of the fishing villages are still inhabited, and fishermen visit the island yearly to catch fish. But the majority of the island and its structures have been abandoned.[4] 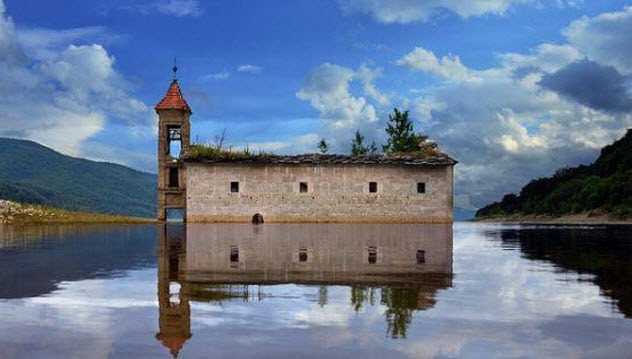 Mavrovo Lake is located in the national park with the same name. In the lake, a stone steeple and the ruins of a church can be seen protruding from the water.

This church used to service the neighboring villages, but a decision to submerge the structure to provide water for a nearby power plant resulted in the church being flooded. Although this was done on purpose by man, nature has taken it as an invitation to sprout flora from the abandoned ruins.

The beautiful church was built in 1850 and flooded in 1953 to form an artificial lake for a dam. The roof of the building has since collapsed and created an island on which vegetation can grow.[5]

Unfortunately, recent droughts in the area have caused the church to come almost completely out of the water during peak season. Nonetheless, the spectacular sight of a church sitting in the shallow blue waters of a lake is one not to be missed. 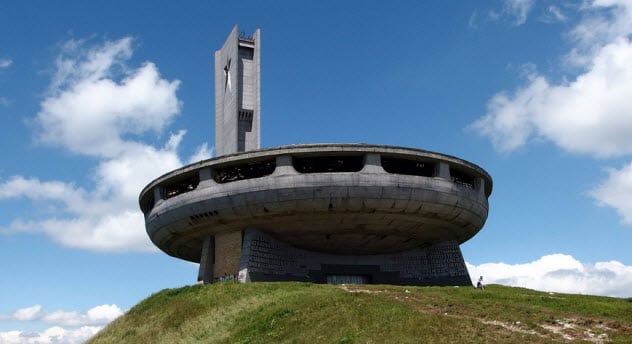 Used as a meeting place for political rallies, the House of the Bulgarian Communist Party, now called the Buzludzha Monument, saw its demise with the fall of the Iron Curtain in 1989. The move from communism to parliamentary democracy removed the building’s purpose and caused it to become abandoned.

The futuristic building, which resembles a flying saucer, is located at the top of Mount Buzludzha. It was opened in 1981 to celebrate Bulgaria’s liberation from the Ottoman Empire and from German occupation during World War II.

Currently owned by the Bulgarian government, the building sits in ruins due to the lack of funding to repair or demolish it. The roof panels have been stolen over the years, allowing the inside to be open to the elements. If you visit the monolithic building during the winter, the interior will be full of snow with large icicles hanging from its leftover skeleton.[6] 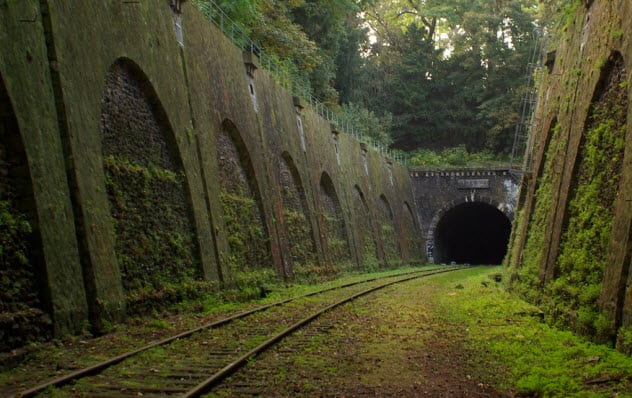 Chemin de Fer de Petite Ceinture (“Little Belt Railway”) was built around Paris as a way of getting to the main railway stations in the city. The circular railway was used by the military and damaged during the Prussian War in 1870 and especially in the 1870–71 Commune civil war.

The train became a popular mode of transportation during la Belle Epoque, but those numbers began dropping around 1902 with the introduction of the Metro. By 1934, the railway had closed its doors. Portions of the circular track are still in use today, but the abandoned parts have grown into breathtaking tunnel gardens.

Although the unused sections of the railway are considered off-limits, people still find ways to access the tunnels. The undisturbed and abandoned tracks are a peaceful, quiet garden space in the heart of Paris.[7] 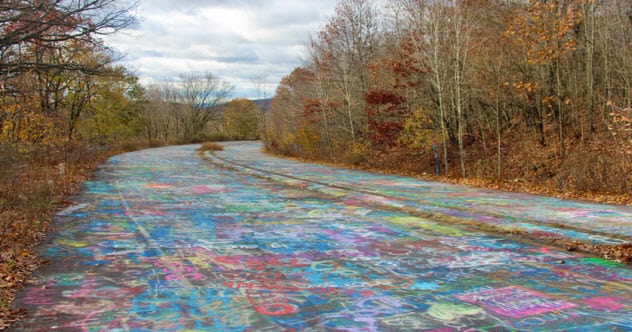 Centralia is a remarkable example of humans using nature and losing control. However, the town is not completely abandoned. As of 2013, it had a population of seven. (Some sources say eight.)

Centralia was a mining town which faced a problem in 1962. A fire meant to burn the town’s landfill sneaked through an unsealed opening and entered the abandoned coal mines below. Eventually, people were evicted from the area as it became increasingly unsafe. Today, only a few people inhabit the town, which has been destroyed by the fire still burning underground.

With most of the houses torn down, Centralia is said to look like a field with streets running through it. The fire in the coal mines rages on and will continue until it runs out of coal to burn. This town is an example of the unruly strength of nature, cracking the roads and thriving despite the toxic fumes from the mines below.[8] 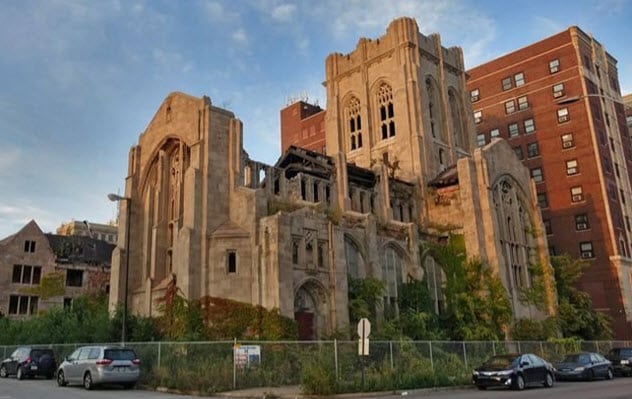 This massive church, which featured a gymnasium for activities and a cafeteria, was built in 1926 in the Gothic Revival style. Unfortunately, the cost of maintenance was too high and the number of visitors began to decline in the mid-1960s.

The church closed its doors completely in 1975. In 1997, a large fire that devastated most of downtown Gary destroyed the roof of the church, leaving it open to the elements.[9]

The only remaining piece of the building is the sanctuary. However, with no roof or windows, the area is extremely open to the elements. Snow and rain accumulate inside the sanctuary, and plants have begun to take over the building, creating untamed gardens.

Unfortunately, access to the building is prohibited. The walls are crumbling, and the structure is unsafe for visitors. Even so, many photographers have found their way inside to capture the church’s natural beauty. 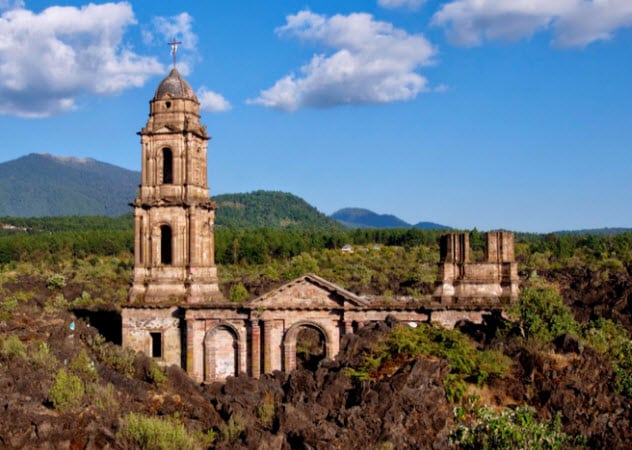 The church of San Juan Parangaricutiro is an enchanting sight that is completely surrounded by solidified lava. In 1943, the Paricutin volcano began rising and erupting from a farmer’s field. The cone grew 410 meters (1,345 ft) in a year and continued to spew lava for eight years after that.

The volcano is monogenetic, which means that it will never erupt from the same place again. Thankfully, no one was hurt during the explosions as the surrounding villages were evacuated quickly. The volcano completely covered two villages, leaving only bits and piece protruding from the thick lava.[10]

Miraculously, a church survived the constant attack of molten rock for almost a decade. To this day, it stands tall, although it is completely surrounded by and filled with lava.

Lava is high in nutrients and helps plants grow quicker, turning the fields surrounding the church into thick, lush gardens. The church is a big tourist attraction, with people coming from all over the world to see the only structure that refused to drown in the molten rock.