The idea of being a keeper in a windswept lighthouse is the romantic dream of many an introvert: hearing the cry of the gulls, looking moodily at the glitter of the sun on the sea while wearing a cable-knit sweater, perhaps having the time to grow a lush, full beard. Yes, there are a lot of positives about being a lighthouse keeper.

Of course, to some of us, it would be hellish to be away from human contact with nowhere to go on a Saturday night. We might end up with terrible cabin fever that could involve seeing fish as mermaids and talking to coconuts named Wilson.

However, there is majesty in a lonely lighthouse, holding fast against the elements and remaining strong in the face of adversity. Here are 10 of the most perfectly beautiful isolated lighthouses. 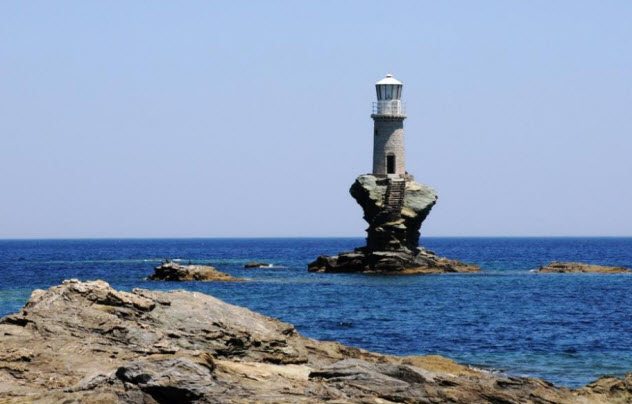 Tourlitis Lighthouse is a round, stone structure that seems to grow out of the rocks off the coast of the city of Andros. It looks like something that fell out of a fantasy story and landed on its narrow bottom in the seabed with its spire in the sky.

The original lighthouse was built in 1897 but was sadly destroyed in World War II. In the 1990s, it was rebuilt as a fully automated structure. No keeper is necessary.

Before its destruction, it was both the home and workplace of an isolated lighthouse keeper. Lonely? Well, that may not be strictly accurate but definitely alone in the spire sticking straight out of the sea.[1]

It is now a very insta-worthy tourist destination with its curved staircase made from the rock on which it sits, surrounded by the sparkling blue water. 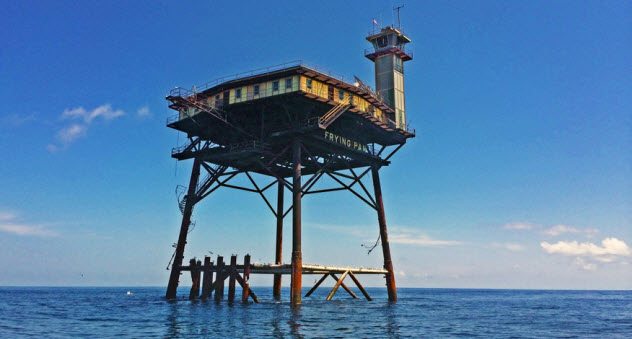 If the idea of staying overnight in a lighthouse appeals to you and you rue being born into a world of automated lighthouses, then perhaps staying at a B and B that is a decommissioned lighthouse is the weekend away for you.

The Frying Pan Tower is situated at the end of the Frying Pan Shoals, the southern tip of the “Graveyard of the Atlantic” off the coast of North Carolina.

As a lighthouse, the structure was manned from 1960 to 1979. For 110 years prior to that, the light that warned ships of the treacherous ground was provided by a stationary lightship that was anchored near the current lighthouse.

Once the lighthouse was automated, the living area (which is now the B and B part) was abandoned. In 2004, the coast guard deserted the whole structure, which was purchased in 2010 for a mere $85,000.[2]

The entire structure somewhat resembles an electric frying pan, which was probably unintentional. It was originally built as an oil rig, and the name of the Frying Pan Shoals predates its construction. 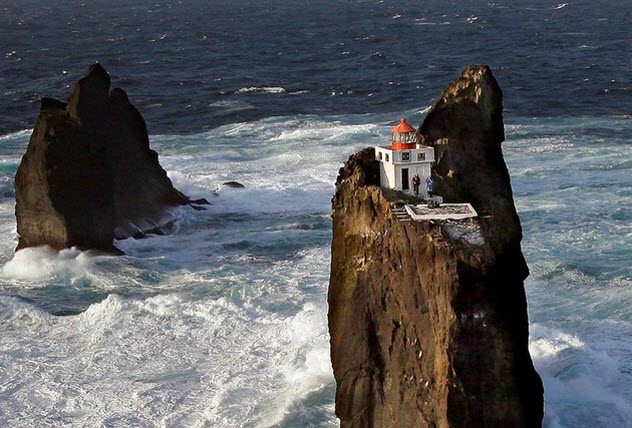 The lighthouse and helipad sit atop one jagged rock that juts out of the Atlantic Ocean. The name of the lighthouse means “three rocks” because the location lies among a group of three rocks west of the Vestmannaeyjar (Westman Islands).

Little has been published on the Internet about how the lighthouse was built, except that construction took place in 1939.[3] 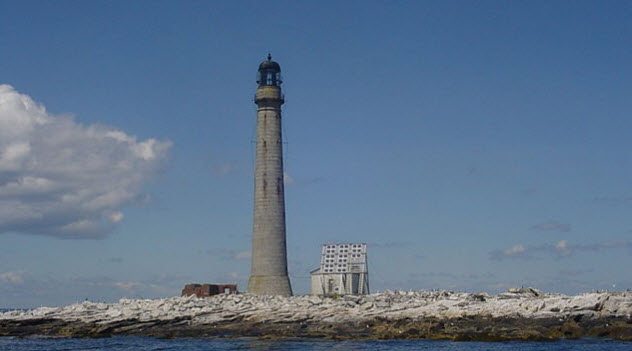 While other lighthouses on this list are jagged, mystical spires of mystery and imagination, the Boon Island Lighthouse, situated just off the Maine coast, has a long and well-recorded history. It is a tall, stone structure erected on a flat, low-lying island, a beacon to warn ships to keep away from the dangerous rocks around an island that has at least once housed cannibalistic shipwreck survivors.

The original wooden lighthouse was destroyed and replaced in 1805 with a stone tower and again in 1831 with a stronger stone structure.

The lighthouse was also the place of retreat for lighthouse keepers when the sea washed over the low-lying island in storms, which happened frequently and would damage other buildings and gardens there.

In 1855, the current 41-meter-tall (133 ft) lighthouse was built. The frequent storms repeatedly leveled the outbuildings, water tanks, and helipad. The living quarters were also damaged, and boulders were swept onto the island. In winter, ice covered the stone buildings, even capping the chimney of the dwelling on one occasion.

The lighthouse was automated in 1980. The island is now owned by philanthropist and lighthouse enthusiast Bobby Sager.[4] 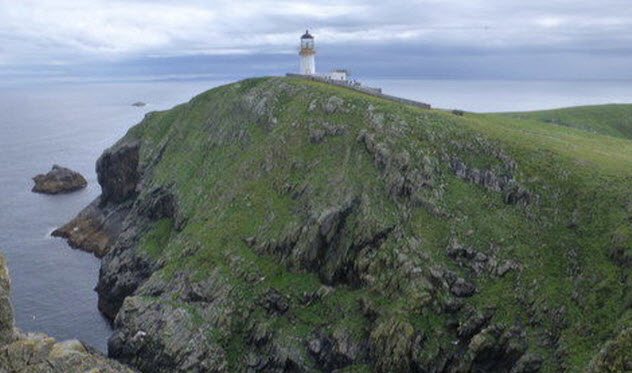 One of the great unsolved mysteries of the early 20th century was the disappearance of the three keepers from the lighthouse on Eilean Mor, one of the Flannan Isles off the coast of Scotland.

In 1900, a passing steamer noticed that the light was out. When a ship was dispatched to check it out, the crew of the Hesperus found that significant damage to the lighthouse had been noted in writing and the place seemed to have been deserted in a hurry. Keepers James Ducat, Donald MacArthur, and Thomas Marshall were all missing, although only two of their oilskins were gone.[5]

Was it a rogue wave that had swept them away? A double murder–suicide? Attack of the aliens? Much has been written on the disappearance of the three keepers.

The lighthouse is now automated and uninhabited again, sitting alone with the wind and sky and seabirds. 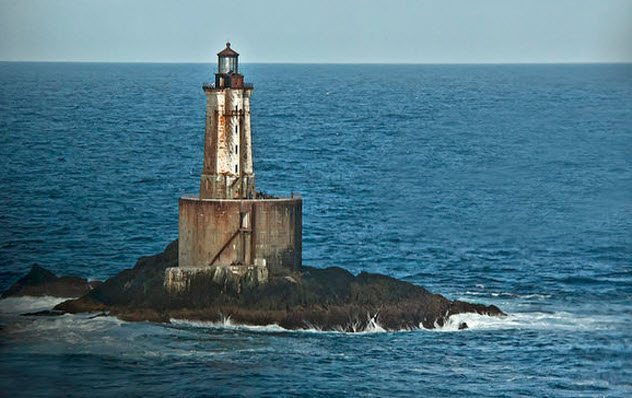 Saint George Reef Lighthouse sits on the Northwest Seal Rock of “Dragon Rocks,” named rather whimsically in 1792 by Captain George Vancouver. He hoped that the “dragon would be slain” one day and ships would stop foundering on the deadly rocks.

It took nearly 100 years for the rocks to be blasted into a suitable foundation for a building and for the construction to commence in 1883. In 1892, the lighthouse was operational.

Due to the isolation and the danger of rogue waves, five keepers worked in rotating shifts so that they could spend part of the year onshore in nearby Crescent City, California, with their families.

The weather was often a problem, with rogue waves tossing rocks as high as the lantern room at the top of the lighthouse and buffeting the stone building itself. On one occasion, the keepers were trapped in the tower for 59 days.[6]

In 1975, the station was abandoned. Although it was relit a few times, it is now still and dark forever. 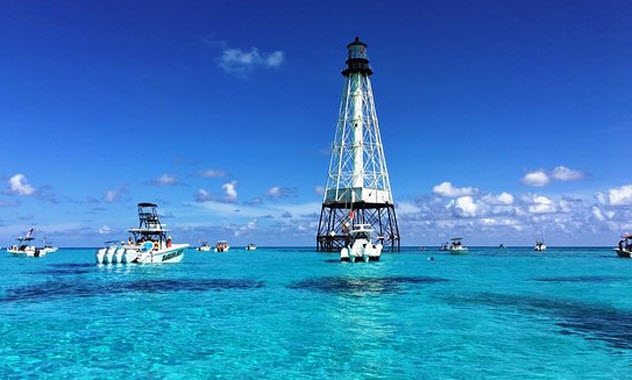 With the exception of the hardships and dangers encountered when experiencing a hurricane, the Alligator Reef Lighthouse, completed on the reef bed in the Florida Keys in 1873, was an idyllic post.

The lighthouse was built to prevent the regular foundering of vessels on the rocks of Alligator Reef.[7]

The structure sits on pylons embedded in the reef, only 180 meters (600 ft) from the Gulf Stream waters. The lantern room is reached by a spiral staircase up the center tower, which is supported by beams.

The lighthouse was staffed by a head keeper and two assistants. When there was no hurricane in progress, it was a true lighthouse keeper’s paradise. Just steps off the back porch, they caught their dinner of lobster or fish with a spear. They also enjoyed the climate and beautiful view that a lighthouse in the Florida Keys had to offer. 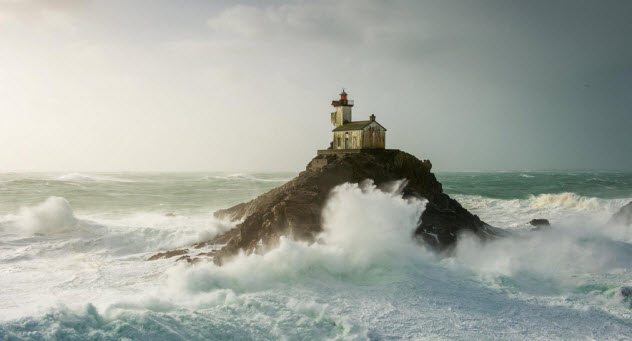 Tevennec Lighthouse is a tiny structure that sits in isolation off the coast of Brittany, France. It has a long association with horror. Folklore tells that it was a repository for the corpses of the local dead and that it was inhabited by Ankou, the personification of Death itself.

The lighthouse was constructed in 1875, and the first keeper succumbed to mental illness, hearing voices telling him to leave. As a result, running this isolated lighthouse became a two-man job and no one was to be there for more than a year.

After the deaths of a two-man team, it was decided that men could take their wives. Still, some men on duty died unexpectedly and others killed themselves. No matter what was tried, even exorcisms, nothing seemed to help.[8]

After the partial destruction of the dwelling in a storm (while a keeper’s wife was giving birth, to add to the drama), the lighthouse was fully automated in 1910. There have been plans to turn the island into an artist’s retreat, but this has not been successful so far. Maybe Ankou doesn’t want paint everywhere. 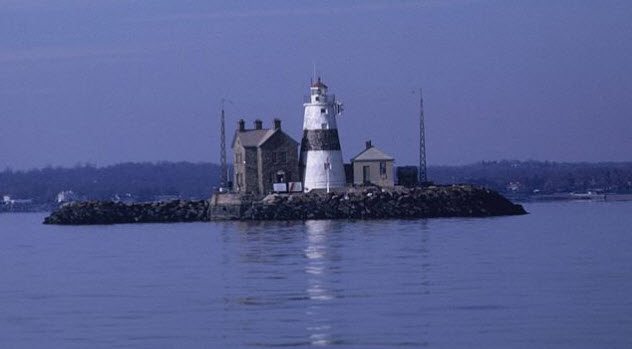 Now here is a cheerful name! But lots of lovely places have strange names with words that have little to do with their history, right?

According to legend, the British would chain men and women found guilty of wrongdoing and sentenced to death to iron rings set in the rocks of the reef. There, the tide would drown the poor souls safely away from any protesters. The victims’ skeletons were left there to torture newcomers as they awaited their own watery fates.

This may or may not be true. Another story is simply that the rocks were dangerous and “executed” many ships. The first one is probably more interesting.

The lighthouse was placed into service in 1850 after several years of people bickering about the site as well as technical trouble with the construction.

Execution Rocks Lighthouse was unique in that the contract of employment empowered keepers to leave when they wanted rather than sign up for a specified term. Not really a sign of confidence in the living arrangements provided on the little rock just above the water off the New York coast.

Initially, the keeper and his wife lived in the tower, which was both unpleasant and leaky. This was the dwelling of the keepers for 17 years before a separate house was built for them.[9]

The lighthouse was fully automated in 1979. You can now visit the lighthouse and camp overnight in a rather primitive fashion if the spirit of isolation appeals to you. 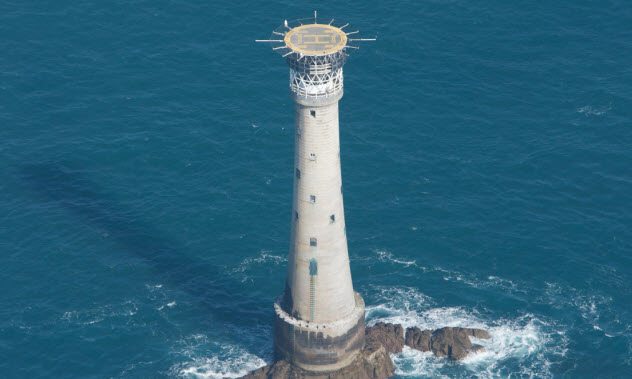 The Bishop Rock Lighthouse looks like a lonely, peaceful dream. A spire 49 meters (161 ft) high sitting on a rock in the Isles of Scilly, it is a tower that one could imagine was the secret dwelling place of Merlin or another British wizard.

Bishop Rock was one of the most difficult lighthouses to build in the world. Due to the extreme wind and waves, the Atlantic Ocean claimed the first structure in 1850 just as it neared completion.

However, the lighthouse was deemed absolutely necessary and construction began anew. The bottom of the tower was built underwater and copped the full force of the tides and waves.[10]

A small hamlet was set up on a nearby islet for workers. The work was slow, taking a whole seven years to build. Frustratingly, the tower was again damaged by giant waves before it was lit.

In 1881, a new lighthouse was built around the old one, with an enormous base constructed over and around the original bottom of the tower to act as a buffer from the waves. Finally, the lonely spire was able to be operational and was inhabited until 1992.

Now Bishop Rock stretches out of the sea as a monument to our storied history of shipping, construction, and the lives of the isolated but maybe not so lonely lighthouse keepers.