Far too often, the media has a tendency to focus on negative or violent events while positive news items take a back seat. That’s not the case here as this list covers only stories that inspire, amuse, and uplift. If weirdness is more your thing, you can check out the offbeat list right here.

This week, we look at the exploits of Wilfred the cat and the man dubbed “the Indiana Jones of the art world.” We’re thankful for a lucky elevator escape and a Vietnam vet who finally got to meet the little girl who kept him going through the war. We are impressed by the efforts of a Filipino engineer and two quick-thinking Russian police officers. We giggle at the penis owl statue and marvel at the star that might be our Sun’s twin. 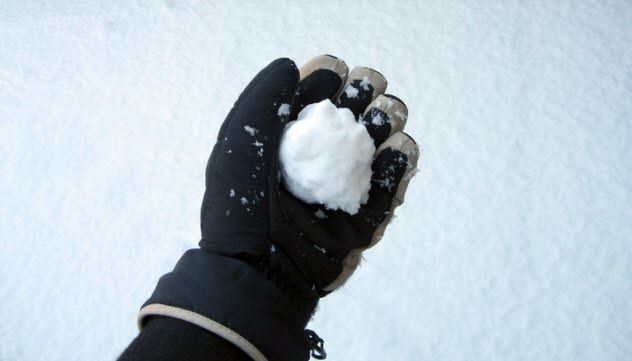 In the Siberian village of Kuragino, First Lieutenant Yevgeny Lunin and Lieutenant Pavel Istomin spotted heavy smoke coming out of a garage while on patrol. The source was a car parked inside which had caught on fire.

They alerted the fire department and evacuated the home but feared that the flames would spread to the neighboring house by the time the firefighters arrived. Therefore, the two policemen used one of the most abundant resources available to them—snow.[1]

They started throwing snowballs at the fire, which had engulfed the fence separating the two houses, in an attempt to slow it down. Soon, local residents started joining in, and they managed to keep the blaze at bay until the fire brigade arrived.

Selfies can put people in dangerous situations. People have died because they were too concerned with taking the perfect selfie and were unaware of the real-life perils around them. However, there is one case where a selfie saved a man from spending the rest of his life in prison.

In September 2017, Texas man Christopher Precopia was accused by a former girlfriend of breaking into her home in Williamson County and assaulting her by using a box cutter to carve an “X” into her chest. He was arrested and charged with a felony. He also faced up to 99 years in prison.

Fortunately for him, Precopia had a solid alibi. On the night in question, he was at the Northwest Austin Hotel 105 kilometers (65 mi) away with his mother. They took a selfie together and posted it on Facebook with the timestamp and geotag to show conclusively that he wasn’t in Williamson County. Prosecutors eventually dropped the charges.[2]

8 The Penis Owl Of Kikinda 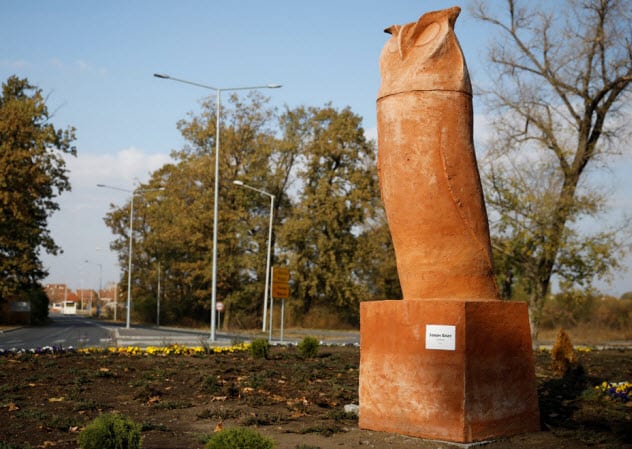 Residents of the Serbian city of Kikinda are upset over a new 2.4-meter (8 ft) terracotta statue of an owl because it looks like a penis.

As the home to the world’s largest roosting population of long-eared owls, Kikinda is a favored destination among bird-watchers. City officials wanted to celebrate its status, so they commissioned local artist Jovan Blat to create an artwork depicting the bird that had brought Kikinda its fame. However, after the reveal, people couldn’t help but notice the phallic shape of the sculpture.[3]

Blat said that he was going for a “stylized sculpture” rather than an exact copy of an owl and offered to redo the artwork. Some people want it gone. But others argue that all the hype and publicity behind it turned the statue into a symbol of Kikinda, for better or worse. Already, they have found kinship with Canberra, the Australian capital that got its own penis owl statue back in 2011. 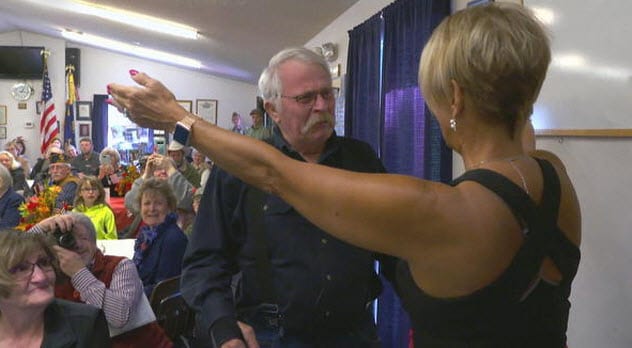 A veteran finally met the little girl whose letter helped him get through the Vietnam War.

On Christmas Day 1970, 23-year-old Army helicopter gunner John Metzler received a card from sixth-grader DonnaCaye. They had never met, but the girl wrote as part of a school project to thank him for his service and to wish him a safe return home.

This meant a lot to John, and he has kept the letter close to him ever since. He returned from Vietnam to his home in Wendell, Idaho, and DonnaCaye’s Christmas card stayed safely tucked behind a picture on the shelf. A few years ago, John asked his family members to track down that little girl, but they were unable to.

Now, however, the two have finally been able to meet courtesy of an “On The Road” segment with Steve Hartman for CBS News. DonnaCaye Ludemann Sica delivered a second “thank you” in person while John looked at her in bewilderment and said, “You’re real.”[4] 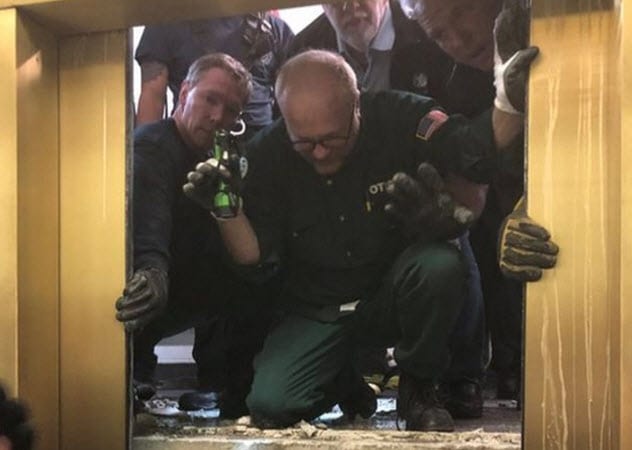 The group had left a restaurant called The Signature Room located on the 95th floor of 875 North Michigan Avenue, the fourth-tallest building in Chicago (also formerly known as the John Hancock Center).

A subsequent investigation by fire officials revealed that a hoist rope had snapped and prompted the fall. Fortunately, other cables remained attached and managed to stop the elevator once it reached the 11th floor.[5]

The stop was smooth enough that none of the people inside, including a pregnant woman, were injured during the fall. However, they had to endure several more hours of terror before being rescued. The elevator was located inside a “blind shaft” which doesn’t have openings on every floor. Therefore, firefighters had to break through a wall on the 11th floor to access the elevator.

5 This Belongs In A Museum 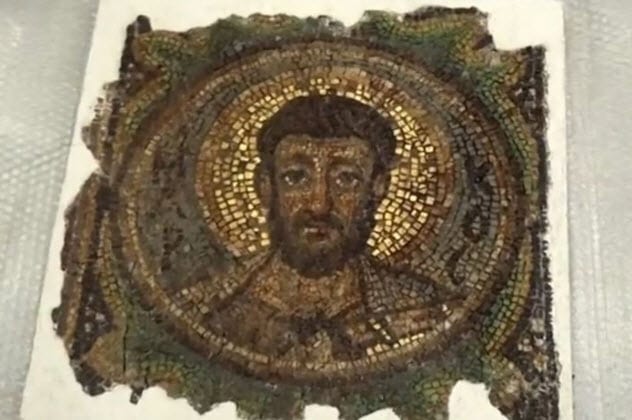 A man dubbed “the Indiana Jones of art” has recovered a sixth-century mosaic stolen from Cyprus four decades ago.

Dutchman Arthur Brand is an art investigator. He first made headlines back in 2015 when he recovered Hitler’s Horses—a pair of statues that once sat outside the Nazi leader’s office. His exploits have been further documented in a Dutch TV show called The Art Detective.

Over the past three years, Brand has been on the trail of a Byzantine mosaic which depicts Saint Mark. It had been stolen from the church of Panaya Kanakaria during the Turkish invasion of 1974. The priceless work of art was thought to have been created as early as AD 550. It was one of a handful of Christian artworks that survived when the church was partly destroyed during the eighth century.[6]

The mosaic was found in the possession of a British family living in Morocco. The current owner inherited it from his father, who bought it in the 1970s not knowing that it was stolen. The unidentified owner agreed to give it back and was granted a small compensation as a symbolic gesture. Brand then turned it over to Cypriot officials at the country’s embassy in the Netherlands. 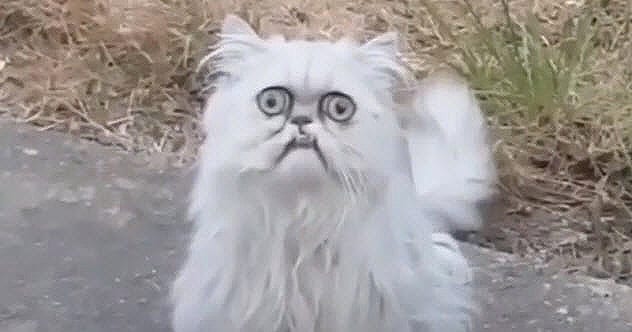 Wilfred has become the Internet’s new favorite feline after a clip of the cat with an expletive-filled, ranting voice-over by actor Michael Rapaport went viral.

Wilfred is a Chinchilla Persian that looks weird, to say the least. He has an underbite, crooked teeth, and giant, bulging eyes. His unique appearance coupled with his tendency to stare directly into the camera made Wilfred a likable cat on Instagram.

His popularity skyrocketed over the last two weeks thanks to New York actor and comedian Michael Rapaport. He took a clip of Wilfred relaxing in his owner’s backyard and dubbed over it. With lines such as “it looks like grandma” and “blink, motherf—r,” the video became an instant online sensation.[7]

3 Can Bamboo Solve A Slum Crisis? 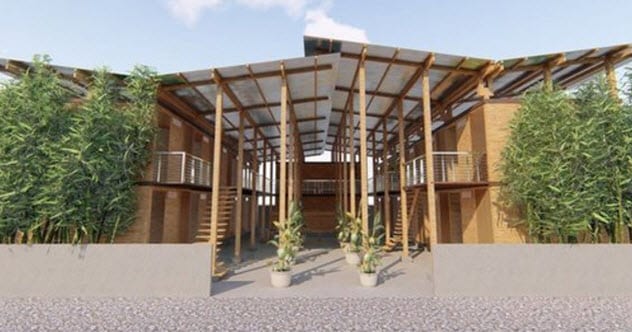 A Filipino engineer won the top prize of the Cities for our Future challenge with a housing unit made of bamboo that is cheap to manufacture and takes only four hours to build.

Earl Patrick Forlales is a 23-year-old student from the Philippines who went to England to study material science engineering. He recently took part in a competition established by the Royal Institute of Chartered Surveyors (RICS) and won first place with a communal housing unit he calls CUBO.

The CUBO unit can be manufactured in a week and built in four hours at an affordable price of £50 per square meter (11 ft2). According to Forlales, besides being a cheap and functional home, it is also “designed to turn community waste into energy and other valuable resources.”[8]

The bamboo is eco-friendly and can be harvested annually without damaging the soil. Rainwater is saved by using slants in the roof, but stilts are installed to keep out floodwater.

Forlales’s hometown of Manila has a slum crisis with four million people living under impoverished conditions. The young engineer hopes that his design could help alleviate some of these woes and plans to use his £50,000 prize money to build the first CUBO houses in Manila. 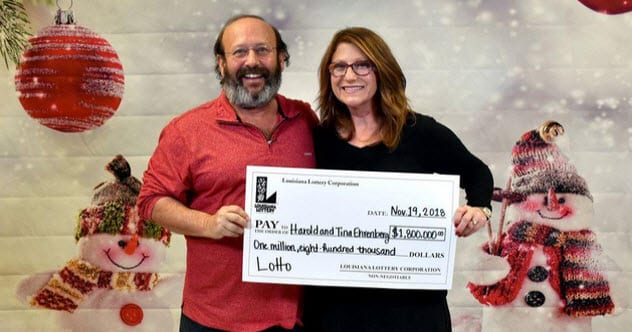 One couple from Mandeville, Louisiana, had over a million extra reasons to be thankful this Thanksgiving after finding an old winning lottery ticket while cleaning house.

With family coming over for the holiday, Tina and Harold Ehrenberg thought they needed to spruce up their home a bit. While getting rid of all the extra junk and clutter, they found a bunch of old lottery tickets on the nightstand. Fortunately, they had the sense to check them before throwing them out. One of the tickets was worth $1.8 million.[9]

The ticket had been purchased on June 6 in Metairie. Fearful that they might have missed the deadline to redeem their prize, the Ehrenbergs discovered that they had just two weeks before the winning ticket became worthless. The couple received almost $1.3 million after taxes. 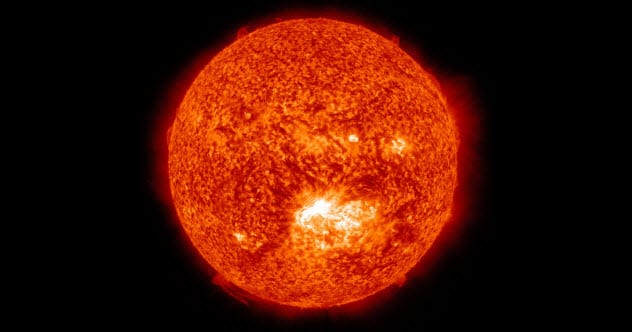 Astronomers believe they might have found a “solar twin”—a star almost identical to our Sun which was created in the same stellar nursery.

A stellar nursery is a dense region of space within a nebula full of dust and gas where stars are formed. Our Sun took shape in such a place, likely alongside thousands of others stars. Once they are formed, the galaxy’s gravitational forces spread those stars far and wide. Finding them is a real challenge.

That is where the AMBRE Project comes in. It is a joint effort between the European Southern Observatory (ESO) and the Observatoire de la Cote d’Azur to try to determine the ancient family tree of the Sun. Their work uses data from spectrographs and the GAIA mission to calculate the ages and motions of stars to trace them back to their origins.

Until now, only one sibling called HD 162826 had been found back in 2014. However, scientists are confident that HD 186302 is not only a sibling but a near-identical twin. It is a main sequence star located 184 light-years away. It has roughly the same age, metallicity, chemical abundances, and even carbon isotope ratios as our Sun.[10]

Further study could help to paint a better picture of the stellar nursery where our Sun was born. Of course, people wonder if HD 186302 could house life just like its brethren. The next step for the AMBRE team is to see if it can detect any planets orbiting the star.