Some people have always been frightened of bridges. Gephyrophobia sufferers often try to avoid crossing bridges altogether, driving miles out of their way to avoid them. Of course, quite a few bridges can be rough experiences for those with acrophobia, as well.

With some bridges, however, terror seems to be the only sensible response. Here, we look at ten bridges that would turn anyone’s legs to jelly. Read on, but don’t look down. 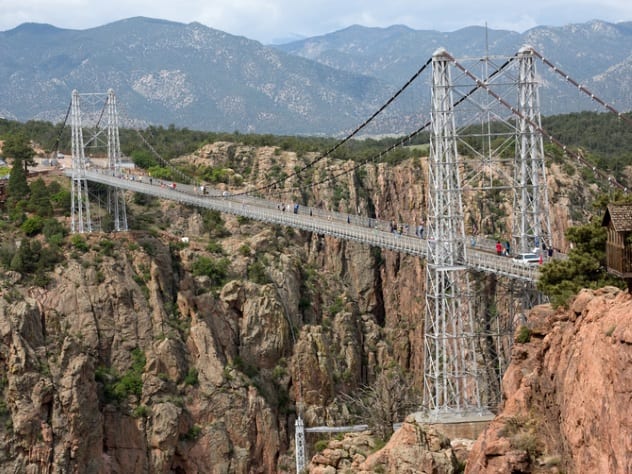 The Royal Gorge Bridge, the world’s highest bridge until 2001, was built in 1929 for a paltry $350,000. The bridge spans 384 meters (1,260 ft) across Colorado’s magnificent Royal Gorge. The Arkansas River thunders by 291 meters (955 ft) below, occasionally carrying white-water rafters battling against the elements.

It took just six months to construct the bridge. The two main cables each weigh 200 tons and consist of 2,100 individual cables twisted together. 1,292 planks of wood were bolted to the base to form the deck of the bridge. As there is no vertical truss to the bridge, it has a tendency to move with the motion of the footfall, which can be disconcerting when you’re crossing a gorge with a raging river almost 300 meters (1,000 ft) below you.[1]

If you don’t fancy taking the bridge, you could always try the aerial gondolas, which will get you to the other side without the need to panic. 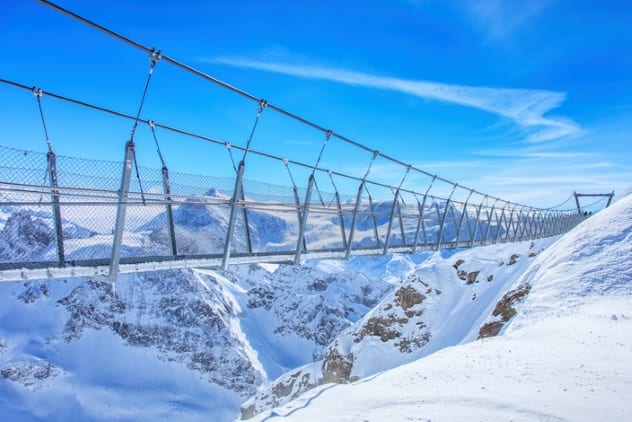 In order to cross the Titlis Cliff Walk, you will first need to climb Mount Titlis, where you will find the bridge waiting for you at the summit. You will then walk through the glacier cave via an underground tunnel to reach it. 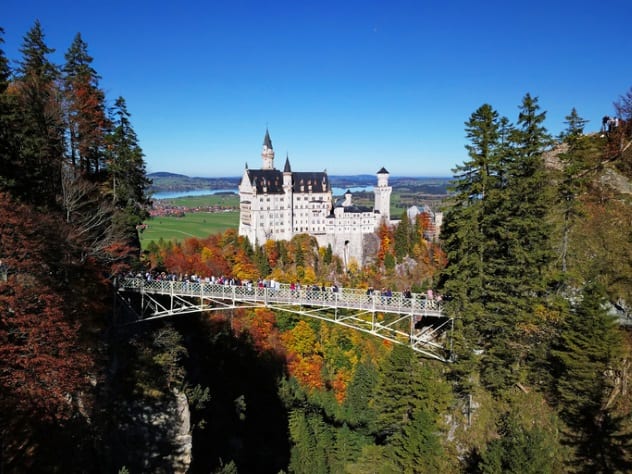 Marienbrucke (Queen Mary’s Bridge) in Bavaria is on the estate of Neuschwanstein Castle. The castle is everything that a castle should be. Perched on the top of a cliff, it looks as if it should be occupied by a princess and a couple of dragons. The bridge is no less fantastic than the castle. It passes 90 meters (295 ft) over the Pollat River and offers brilliant views of the castle.[3]

The bridge was constructed solely for the purpose of enjoying the view. Maximillian II had had lookout posts created around the area to admire the castle, and in the 1840s, he commissioned the building of the bridge as a birthday present for his consort, Marie, who, luckily, liked mountain climbing and therefore had a head for heights. 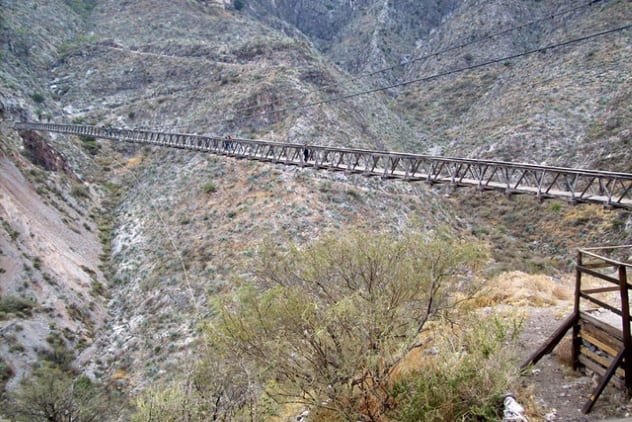 The bridge was originally constructed in 1898 and was used to move gold and silver taken from the local mines and bring supplies in. The bridge sways as you walk on it, and although it has handrails, the spaces between the planks are wide, which means that you have a good view of the canyon below if you are foolish enough to look down. Traffic also moves both ways across the bridge, so you may find yourself jostled as you walk.[4]

If you are brave enough to cross the bridge (designed, believe it or not, by the same people who designed the Brooklyn Bridge), you will be able to visit the ghost town museum and one of the abandoned mines. Hmm. Maybe not.

6 The Hanging Bridge Of Ghasa
Nepal Though the bridge looks rather fragile, it is said to be quite sturdy. It is still used to move cattle, though the beasts are sometimes blinkered to stop them from panicking as they cross the bridge. And you can see why. If only you could blinker the people, too.[5]

The bridge is said to have been built to ease congestion across other bridges and is used daily by locals driving their animals across it, which makes the idea of traffic jams interesting. One of the more unusual-looking bridges, Iya Kazurabashi is found in Japan’s Iya Valley among mountains and hot springs. The vine bridge is 45 meters (148 ft) long and only 14 meters (46 ft) above the Iyagawa River, but what it lacks in scariness, it makes up for in weirdness.

It is constructed from a plant called Hardy Kiwi, which, though relatively strong, is not really suitable for bridge-building because it is not durable and is prone to rotting. Not a good quality in a bridge.

However, the Hardy Kiwi was used, it is said, deliberately so that the bridge could be cut down quickly in case of invaders, thus preventing the invading army from crossing the gorge.

The bridge is rebuilt every three years, and the vines are lashed to tall cedar trees at either side of the gorge. In these days of health and safety, the vines also hide steel ropes inside them, just in case. However, the wide gaps between the steps of the bridge, giving a vertical view of the river below, and the wild swinging as you pass along it are still enough to frighten the life out of most visitors.[6] The Q’eswachaka Bridge, sitting on the Great Inca Road through the Andes, is the finest remaining example of an Inca suspension bridge. The bridges were of vital importance in connecting and consolidating the Inca Empire, and they continued to be used as ordinary parts of the road system for centuries afterward.

Inca bridges are made by braiding natural fibers to make the floor, handrails, and vertical ties between the base and the handrails for protection. Stone pillars anchor the cables on either side of the bridge. Crossing the bridge is not a smooth experience, it has to be said, and the “loose” nature of the construction allows walkers to get a good view of the river below.

Local communities replace the bridge each year, harvesting the grass and weaving it into cables. The inhabitants of each side of the bridge then work together to pull the ropes across. They do not demolish the old bridge until the new one has been built alongside it. Each community begins work at their own end and meet in the middle of the bridge. The whole bridge can be rebuilt in three days, after which the communities gather for a celebration, which seems only right.[7]

The Kuandinsky Bridge stretches for 570 meters (1,870 ft) over the Vitim River in Siberia. Originally a railway bridge, this is now an unofficial vehicle bridge. The term “bridge” is used extremely loosely. It is just over 2 meters (6.6 ft) wide, and it has no railings or safety precautions of any sort to prevent cars from toppling into the frozen waters below. It is rusted, and the wooden sleepers have rotted in the harsh conditions. No major repairs have ever been carried out on the bridge, since the railway company that built it never used it, and no one else will take responsibility for it.[8]

The locals, who’ve perhaps had their brains addled by the constant cold, began to use the bridge as a shortcut across the river. Heavy cars are apt to break the sleepers, and holes are covered with any spare planks or bits of wood that can be found lying around. This means getting out of the vehicle and fixing the bridge en route. And, just to make it more fun, the wood is known to be extremely slippery when wet, which is all the time. There is, it seems, much to be said for the long way around. Sometimes, it seems that bridge designers are twisted, sadistic people. Take the designers of Hebei’s Hongyagu Bridge, which opened in the end of 2017.[9] They have constructed a bridge which spans 488 meters (1,601 ft) over a vertical drop of 220 meters (722 ft), which is nerve-wracking enough for most people. But the designers decided to add a glass floor so that users could have a great view of the valley below them and trick their minds into believing that there is nothing holding them up. And as if that isn’t enough, they decided to give the bridge added “sway.”

The glass panels are 4 centimeters (1.6 in) thick, which doesn’t seem like a lot when it sits between you and certain death. The bridge is capable of accommodating 2,000 people at a time, but only 600 are allowed to walk on it, just in case. Visitors have to wear “shoe gloves” to protect the glass from scratching or breaking. (This is apparently a thing with glass bridges. Who could have known?)

The bridge authority has stationed staff members at points along the bridge to assist those who feel faint. Still, it could be worse. The creators of the glass suspension bridge have designed it with added sound effects. As you take each step along the glass bridge, it sounds as if the glass is cracking beneath your feet. Nope. 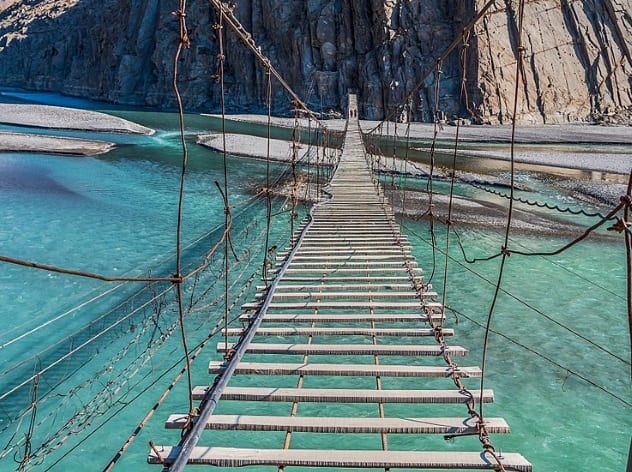 The Hussaini Hanging Bridge in Pakistan hardly deserves the name “bridge.” The current bridge is the new, improved, version, the first (even scarier) version having been destroyed by the weather. The bridge is made of rope and planks. There is a constant icy wind blowing, too, which makes the bridge sway violently. At least ten people have died while crossing the bridge, according to locals.

If you were to fall, you would be plunged into the river below. Many tourists come to the bridge, often taking two steps onto it, taking a picture, and jumping hastily back. For the local people, however, it is not so easy. They still regularly make use of the crossing, even carrying large packs on their backs as they walk across.[10]

Read about more fascinating and notable bridges on 10 Bridges Built By The Ancients That Are Still In Use Today and 10 Fascinating Stories From The History Of The Brooklyn Bridge.