Imagine you are diving underwater, and you suddenly come across a river below the surface. That’s weird, right? However, such phenomena can and do occur in nature.

Underwater rivers aren’t the only bizarre things you can find beneath the waves. There are also lakes under glaciers, waterfalls below the surface of the ocean, and an ocean deep inside the Earth’s mantle. Here are ten pools, rivers, lakes, and waterfalls that are right under another river, ocean, or glacier. 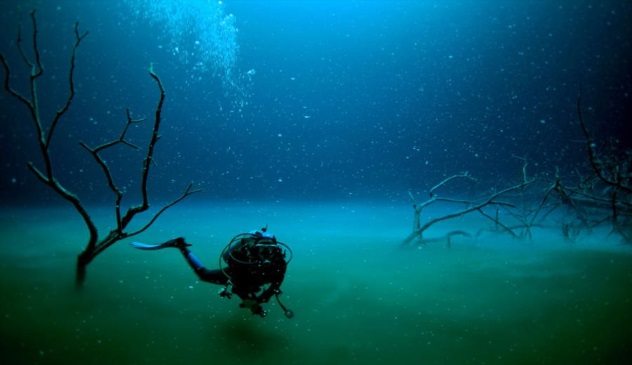 Cenote Angelita (Angelita meaning “Little Angel”) is one of the cenotes in Mexico’s Yucatan Peninsula. A cenote is almost like a sinkhole except that it is filled with water. It is formed when a weak limestone collapses and exposes groundwater below.

Cenote Angelita actually contains a saltwater river at the bottom. It is separated from the fresh water above by a halocline, a deadly cloud of hydrogen sulfide that contains a mixture of both waters.

The halocline is so misty that it is impossible to see through it without a torch. It is also poisonous. Besides acting as a natural barrier between the fresh and salt water, the halocline also acts as the de facto seabed of the freshwater portion and stops lighter objects that fall into the cenote from reaching the salt water below.[1] 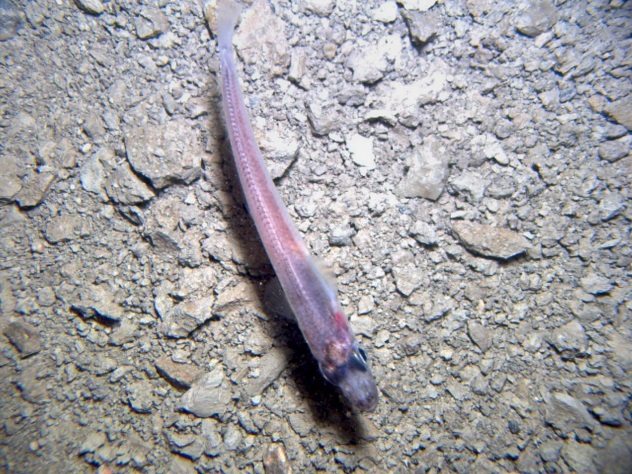 Lake Whillans is located under the Ross Ice Shelf in Western Antarctica. Scientists believe it is between 10 and 25 meters (33–82 ft) deep, although they found it to be only 2 meters (6.6 ft) deep when they drilled into it for the first time in January 2013. This doesn’t mean it isn’t deeper at other areas, though.

Water samples retrieved from the lake revealed the presence of microbes that have evolved to survive without the need for sunlight.[2] These microbes feed on fossilized pollen that has been buried under the ice for over 34 million years.

Drilling 730 meters (2,400 ft) to reach a 10-meter-deep (33 ft) body of water at a nearby location, scientists found more microbes, crustaceans, and some small, strange-looking fish with large eyes. Scientists could not say for sure why these fish have exceptionally big eyes, but it might be connected with their dark habitat.

The largest of the fishes were also translucent, and their internal organs could be seen from the outside. This colorlessness is believed to be the result of the unavailability of hemogoblin, the protein that makes blood red. However, scientists could not confirm whether this translucent fish was a new species. 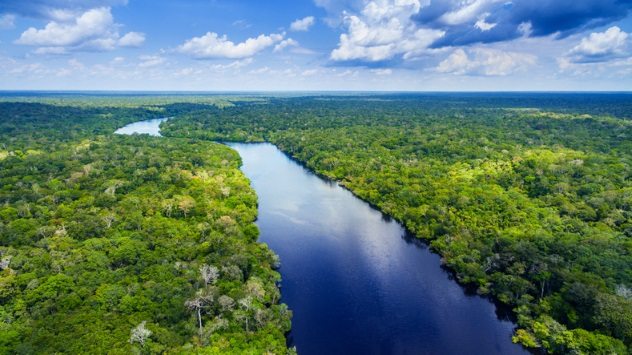 There is a river 4,000 meters (13,000 ft) below the Amazon River in Brazil. This river is 5,950 kilometers (3,700 mi) long, which is long but still shorter than the Amazon. It is unofficially called the Hamza River in honor of geophysicist Valiya Hamza.

The Amazon may beat the Hamza in length, but the latter trounces the former in width. It is 200 kilometers (125 mi) wide at its narrowest and 400 kilometers (250 mi) wide at its broadest, dwarfing even the mighty Amazon. The Amazon wins in every other category, though. Water flows through the Hamza at a rate of one million gallons per second, which is way too small when compared with the Amazon’s flow rate of 35 million gallons per second.[3]

Water doesn’t even travel more than 100 meters (330 ft) a year in the Hamza, which has caused some scientists, including Professor Hamza, to argue that it doesn’t technically qualify as a river. A mere 100 meters a year is an abysmally slow speed for a river. Even glaciers cover more than that distance in a year. The Hamza’s extremely slow rate of flow could be the result of it flowing through porous rocks and not open space like the Amazon. 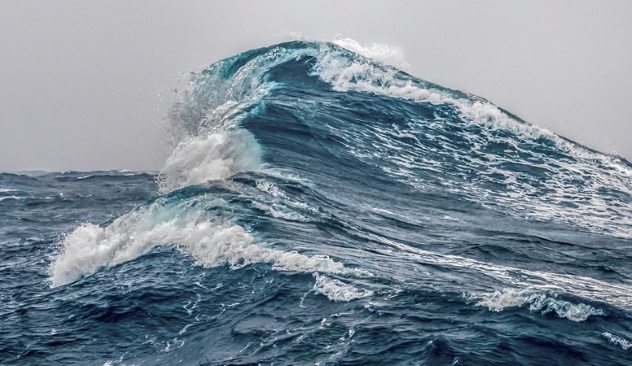 Type “the highest waterfall in the world” into your search engine, and it will most likely return with Angel Falls in Canaima National Park, Venezuela. At 979 meters (3,212 ft), Angel Falls is incredibly high—so high that some of its water evaporates before it reaches the bottom. However, it is no match for the 3,500-meter-tall (11,500 ft) Denmark Strait Cataract under the Atlantic Ocean between Greenland and Iceland.

The Denmark Strait Cataract is the result of the cooler waters of the Greenland Sea meeting the warmer water of the Irminger Sea. As the waters meet, the cooler and denser waters of the Greenland Sea sharply slide down to the ocean floor, creating the waterfall. The water doesn’t remain where it is after hitting the seabed. It travels south and rises to the surface to replace the warmer waters traveling north, and the process continues.[4]

6 Unnamed River Under The Black Sea 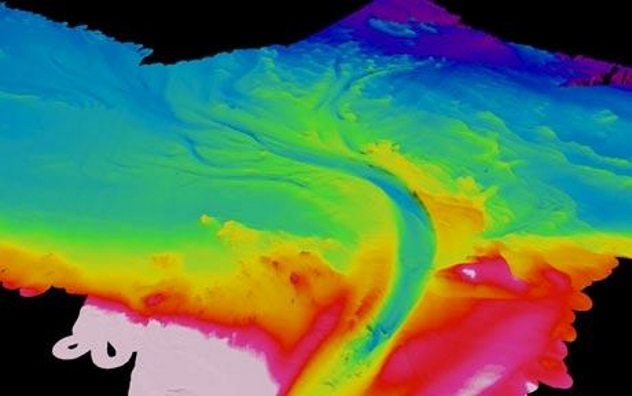 There is a river flowing under the Black Sea. The unnamed river is not your average underwater river. It features waterfalls and rapids along its length. Had it been overground, it would have been the sixth-largest river in the world in terms of how much water flows through it. It has ten times more water than the Rhine, which is the biggest river in Europe.

The river is up to 35 meters (115 ft) deep and 1 kilometer (0.6 mi) wide and flows right on the floor of the Black sea. This is possible thanks to its high salinity, which prevents its water from mixing with that of the Black sea. It was observed by scientists from the University of Leeds, who tracked it with a robot submarine for 60 kilometers (37 mi) until it dissipated into the deep sea.[5] 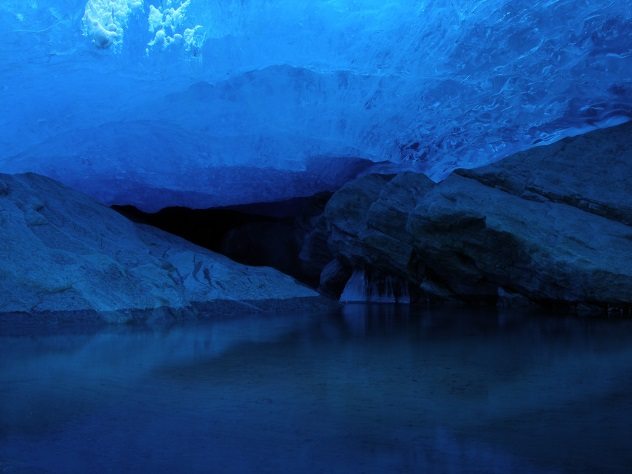 One of these ice caves was found in 2007 in the Nigardsbreen glacier range in Norway. It features a chamber 8 meters (26 ft) high and 20 by 30 meters (66 x 98 ft) in area. This cave even contains a pond. The pond was formed after water from the melting glacier melted an entry point and started accumulating under it because it couldn’t flow anywhere else. The pond warms the air inside the cave, causing the glacier to further melt from within and increasing the volume of water in the pond.[6] 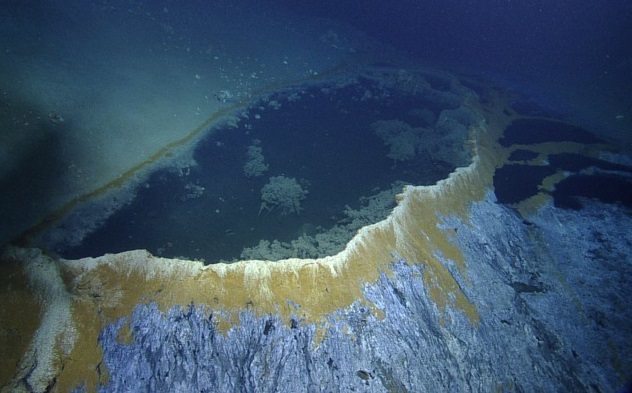 The Hot Tub of Despair is a brine pool 1,000 meters (3,300 ft) below the surface in the Gulf of Mexico. Scientists believe it was formed millions of years ago when the Gulf of Mexico evaporated, leaving behind heaps of salt. The salt soon submerged and ultimately became an underwater pool when water returned.

Having an unusually high salt density is the defining characteristic of brine pools. Some are so dense that submersibles can “land” on them. The Hot Tub of Despair is four times saltier than the surrounding ocean. It lacks oxygen but is rich in hydrogen sulfide and methane, which are almost always disastrous to marine life.

Unfortunate fish and crabs that dare to swim into the pool almost never leave alive. The high salt content of the pool also leaves their bodies preserved for years. However, other organisms like bacteria, mussels, and tube worms have adapted to live by the side of the pool.[7] 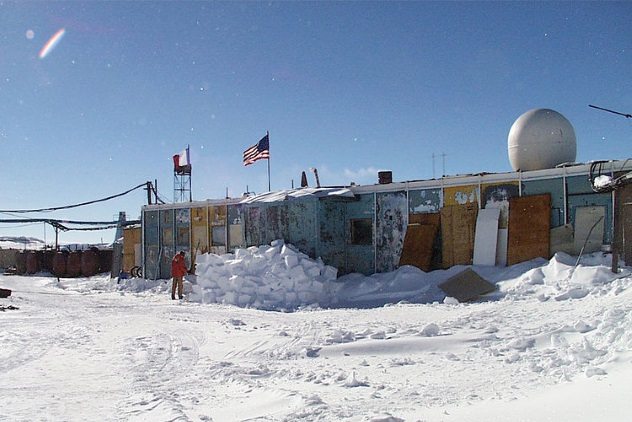 In 1990, Russian researchers at the Vostok Station in Antarctica were drilling for ice cores when they discovered the presence of a lake right under their station. The lake was named Lake Vostok, after the research station, although some prefer calling it Lake East. It is 240 kilometers (150 mi) long and 50 kilometers (31 mi) wide and contains over 5,400 cubic kilometers (1,300 mi3) of water.

Russian scientists extracted water from the lake in February 2012 after drilling through 3,769 meters (12,366 ft) of ice. A year later, they announced the discovery of an unknown bacteria from water extracted from the lake. However, there are concerns that the bacteria might not be from the lake and might have even been introduced into it by contaminated drills and freeze-resistant fluids used during drilling.[8] 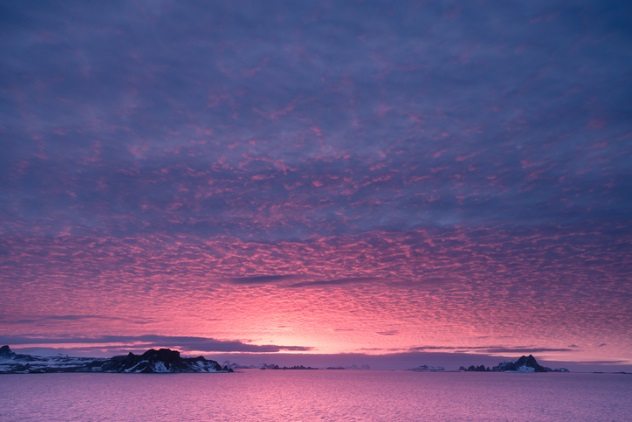 Lake Vostok is the largest subglacial lake in Antarctica. This unnamed lake is the second-largest. Scientists have not actually seen this lake or drilled water from it, but they established its size and existence by analyzing satellite pictures of the ice covering Antarctica.

They noticed that the top of the ice in some areas had depressions that were consistent with those seen above other known subglacial lakes. Scientists believe this unnamed lake has the shape of a ribbon. It is a 100 kilometers (60 mi) long and 10 kilometers (6 mi) wide.

The lake itself has several feeders that travel for over a 1,000 kilometers (600 mi). Two of these feeders might even be channeling water from the lake into the ocean. Scientists hope to drill into the lake in the coming years and find out whether it contains unique life-forms not seen anywhere else on Earth.[9]

1 An Ocean Inside The Earth’s Mantle 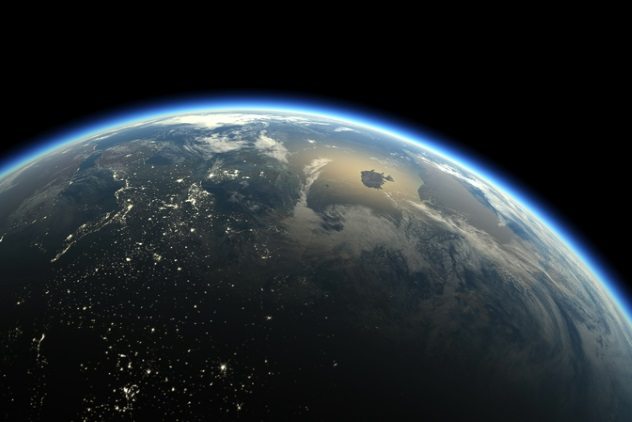 How did water reach planet Earth? No one can say for sure, but most scientists say that some icy comets crashed into our planet.

According to Steve Jacobsen and other scientists from Northwestern University, however, the water on Earth might be from Earth itself. The scientists have evidence that there is an ocean 660 kilometers (410 mi) below the Earth’s crust, in an area of the mantle called the transition zone. This ocean contains three times the amount of water found in all oceans of the world combined.

The water is inside a mineral called ringwoodite and is slowly brought aboveground by geological activities like earthquakes and erupting volcanoes. Besides providing the oceans of the Earth with water, scientists also believe that this ocean also regulates the water aboveground. If it weren’t so, the world would have been covered with water.[10]

Read about more amazing things that can be found underground or underwater on Top 10 Unbelievable Things Found Underwater and 10 Amazing Underground Cities.