The vast expanse of Siberia holds many secrets and dangers. Despite its harsh seasons, humans have lived among the region’s mountains and lakes for millennia. We know comparatively little about these ancient societies, but we’re learning more all the time.

Siberia’s permafrost guards the only traces of unknown cultures, unusual graves, and even more unexpected DNA. There are riddles refusing to be solved, bizarre things that land in the woods, and art displays on a scale never seen before. 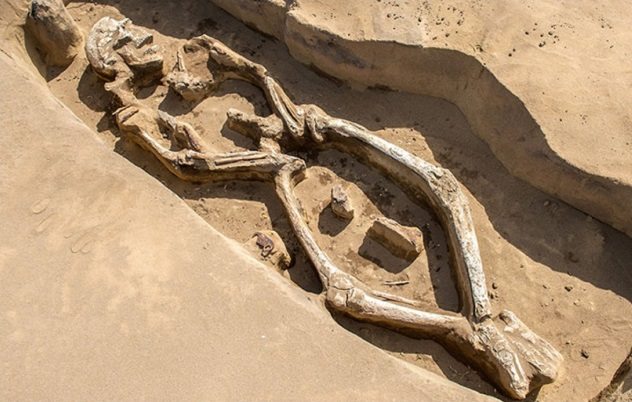 In the Russian province of Primorsky Krai, a skeleton seemed to have a jolly time.[1] Named Mikhail by the archaeologists who opened his grave in 2017, he was the only 30-something in a graveyard for the elderly. What made him more unique was his strange posture. Hinting at an unknown burial ritual, Mikhail rested on his back. His wrists crossed at the pelvis, and while the ankles crossed each other, the skeleton’s knees were far apart. This lent the remains a dancing look, but reality was less festive.

Tests indicated Mikhail likely landed in the grave with bound hands and feet. The presence of arrow tips, especially one found near a vulnerable hip artery, is the only clue how the man might have died. Researchers are also considering if Mikhail, who lived between the seventh and ninth centuries, suffered from an illness that deformed his legs. Solving the mystery of the dancing skeleton will be hard. It’s difficult to pinpoint whether the arrows were the cause of death or were simply funerary items and, if he was tied up, what the reason was. 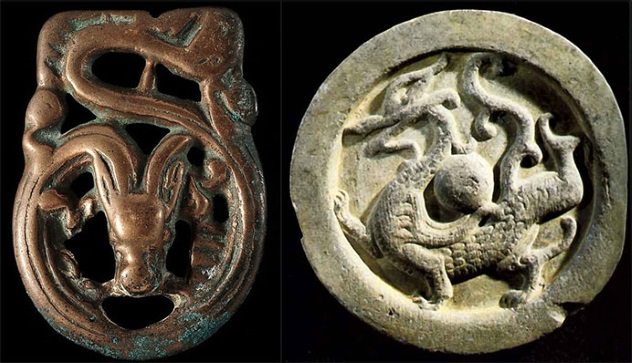 During the 1970s, Sergei Fefelov plowed a farm field in Khakassia when his tractor struck metal. Upon investigation, he found eight dragon-shaped buckles.[2] They were almost 2,000 years old and clearly depicted the serpentine beasts. The discovery not only added dragons to Siberia’s ancient mythology but proved that they evolved without any outside influence. Not even Chinese culture spreading throughout South Siberia was responsible. At the time, China had yet to formulate a clear image of the creature.

A detailed study declared the Fefelov dragons unique. They may have been talismans to ward off danger or were linked to astronomy. Close to where the buckles were discovered was an ancient site called Sunduki. It was previously determined that during its heyday, locals used it as an observatory. It would appear that the Siberian dragon did not survive the powerful presence of its younger cousin. Later depictions were all copies of the zigzagging Chinese dragon. 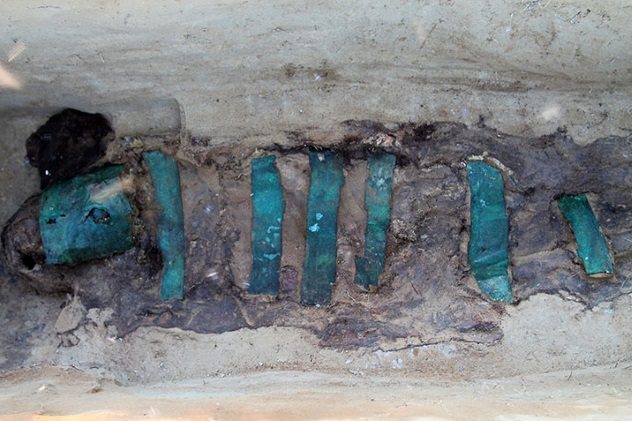 In the north of Russia, a lost culture from the eighth century wrapped their dead in copper. In 1997, a necropolis was unearthed near Salekhard.[3] In 2017, the Zeleniy Yar cemetery yielded a pair of corpses with unusual death attire. Each in their own grave, an adult and a six-month-old infant were tightly cocooned in layers of birch bark, fur, and fabric. The most unusual touch was the use of copper. The baby’s mummified bundle was speckled with copper fragments that once belonged to a cauldron. Buried next to the child, copper rings circled the adult’s entire body.

Unwrapping the mummified remains will require a long, delicate process but will be necessary to safely glean information about this mysterious group. For the moment, the gender of the 1,300-year-old pair remains unknown. However, man or woman, the grownup was tall for the time—around 165 cm (5’5″). For some reason they were buried on a north-to-south line, and their feet pointed to a nearby river. Whoever they were, those preserved in the permafrost cemetery can help researchers understand human migration into Russia’s extreme northern territory. 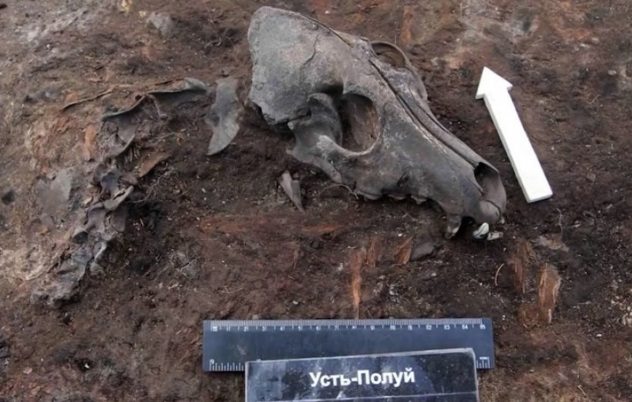 In Siberia, most prehistoric villages had a few mutts hanging around. There were usually less than ten dogs to a settlement, so archaeologists were surprised to find the remains of more than 115 canines at a single village.[4] Analysis of the bones showed the dogs resembled Siberian huskies, just a lot smaller.

Ust-Polui is located near the Arctic Circle and bustled with people and pets around 2,000 years ago. Reindeer remains, as well as skeletal traces of game, suggested the dogs were hunting and herding companions. Recovered sled parts showed they ferried villagers around. More gruesome roles expected of the animals were to serve as meals or even sacrificial offerings. Butchered dog remains were found between those of deer and birds. A ritual element surrounded 15 skulls stacked together; each braincase was split open in an identical manner.

Some dogs were apparently mourned after they passed. In one location, a pet cemetery contained the skeletons of five dogs. Like the village’s human burials, the animals rested on their sides in shallow graves. They were the only ones at Ust-Polui to receive this treatment and appeared to have died naturally. 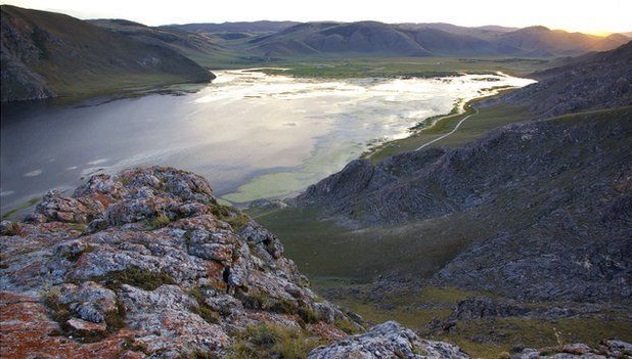 The ancestors of Native Americans included Eurasians and East Asians who left Siberia during the last Ice Age. For a long time, researchers have been trying to untangle the different migrations and when the groups merged. In 2013, the genetic code from a boy buried near the Belaya River 24,000 years ago was sequenced.[5] Aged around four when he died, scientists hoped he could throw some light on the ancestry riddle of the Americas.

Named for a nearby village, the Mal’ta boy’s genome suggested a group related to Europeans donated a third of Native American genes. Strangely, while he carried DNA unique to modern indigenous Americans and living Western Eurasians, he was not related to East Asians. The nearest genetic “relatives” of today’s Native Americans are the Koreans, Chinese, and Japanese. This lack of genetic similarity could provide, at the least, some idea of when the populations hadn’t yet merged. They likely mixed after the toddler’s lifetime, whose people added the 14 to 38 percent of Eurasian genes to Native Americans. 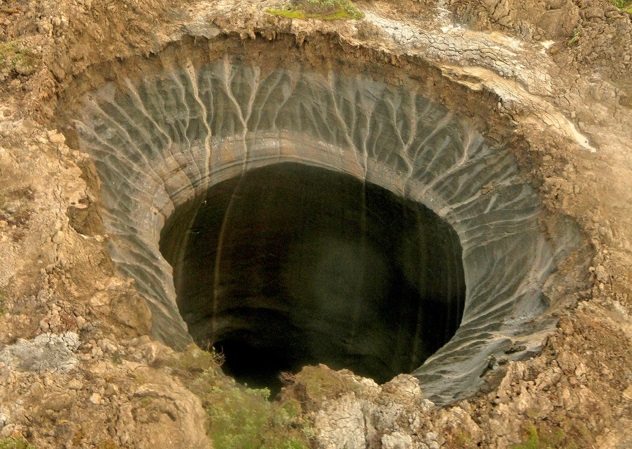 In 2016, scientists on a remote island gingerly watched their step. Bizarrely, Bely Island was turning to jelly in some places.[6] Patches of ground would bulge, then burst. They began appearing all over Siberia. The explosions left tiny pits to gigantic craters. One on the Yamal Peninsula measured 30 meters (98 ft) wide.

The frightening reality became clear after a survey of the Yamal and Gydan Peninsulas found 7,000 bulges. Concerned about the danger posed by these ticking bombs, researchers opened a few. Once breached, the bulges released particularly concentrated methane and carbon dioxide. Methane levels were also extreme at the bottom of the large Yamal crater.

The bulges are an ongoing mystery, but the tundra’s unique geology might have something to do with it. Underground lies an ancient gas belt, sealed beneath the permafrost. Since the phenomenon appears at latitudes where Eurasia is warming, it could be that melting permafrost allows the subterranean gas to rise. There is no clear answer to explain the actual explosions. However, one theory suggests that too much pressure forms as the methane travels through the soil. 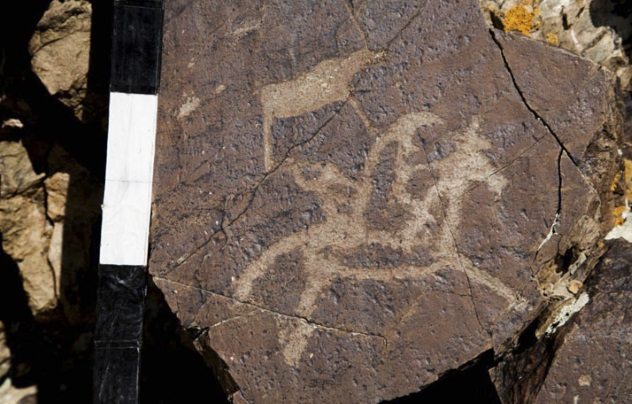 A remarkable collaboration between civilizations from different eras can be seen on cliffs where Mongolia and Russia meet. Over 4,000 years, people decorated Dus-Dag mountain.[7] Perhaps inspired by those before them, each culture added their own rock art to the collection. The so-called Kara-Turug petroglyphs range from the Bronze Age to the later medieval era and number around 500.

The earliest petroglyphs could change the belief that Bronze Age Siberians were purely nomads. Found among the era’s carvings were unique depictions of floor plans, domestic scenes, and roofed houses more permanent than yurts. Next to arrive were the Scythians, who drew hunting scenes and their most important deity, the deer. During the following Xiongnu times and also the later arrival of the Turks, battles and warriors appeared in each civilization’s own style.

Interestingly, each group added the mountain goat (which they all hunted), and nobody destroyed the other’s work. The result was an ancient gallery unlike any other. Though the project was epic, it probably wasn’t the main reason why people visited. They more likely came for the area’s abundant salt supplies. 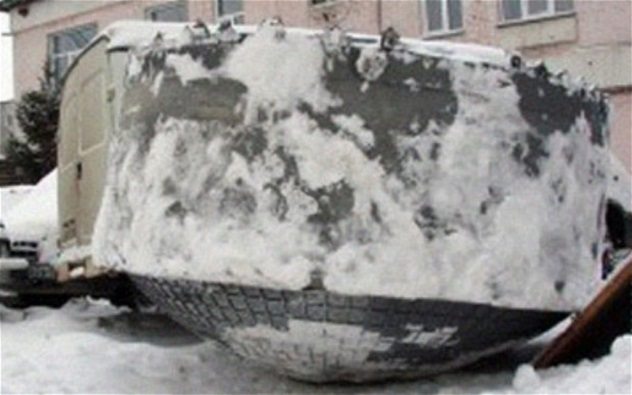 In 2012, a walk in the forest turned strange for locals from Otradnesnky village. They found a metal object bigger than a car. It was cylindrical and U-shaped, with one end tapering into a dome with ridges. The inside was visible, but it was empty. Assuming the 200-kilogram (440 lb) artifact had fallen from space, the villagers dragged it back to Otradnesnky. Local inspectors could not identify it and called the authorities in Moscow.[8] Rumors about the “UFO fragment” thickened when, in the dead of night, unspecified powers removed the object and placed it under armed guard.

Russia’s space agency Roscosmos examined the piece. They declared it was not space technology nor radioactive and was partially made of ultra-strong titanium. NASA’s initial assessment ran along the same lines. Despite agreeing it was probably not part of a spacecraft, NASA made it clear they needed better data and images for a definite identification. Whether Roscosmos provided its American counterpart with more details is hard to say. Media releases beyond the original year and story are rare. 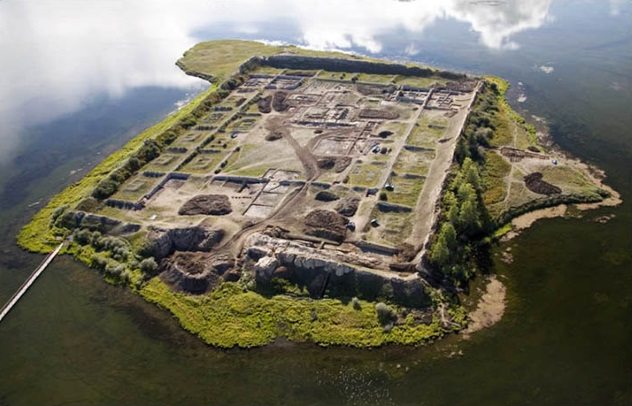 In a middle of a Siberian lake sits an island covered with ruins. Discovered in 1891, the complex spans 3.5 hectares and is surrounded by a rectangular wall 10 meters (33 ft) tall. Por-Bajin is one of Russia’s toughest riddles.[9] Nobody knows the structure’s purpose, its builders, or why they chose the lake in Tuva, located in Central Eurasia. It was far away from other settlements and trade routes. Given its isolation and walls, the 1,300-year-old site could have been a fort. The high altitude meant severe winters, but Por-Bajin lacked a heating system.

Perhaps a summer residence, the layout of the inner buildings suggested a Chinese presence. The architecture reflected city-palaces from the T’ang Dynasty. Several small houses sat in a neat grid around a building in the inner courtyard. This central structure consisted of 36 wooden pillars and two sections connected by passage. The roof was tiled. Also, certain construction work resembled the interlocking Chinese technique of dou-gung. Finally, the layout is similar to T’ang Buddhist monasteries. However, more proof is needed to declare Por-Bajin a monastery, a palace complex, or a blend of the two.

1 A Family In The Taiga 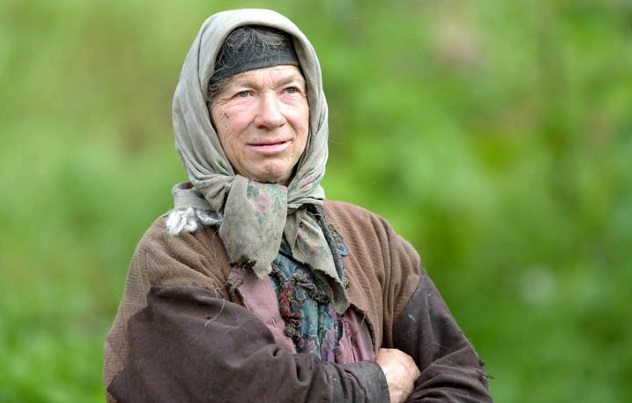 Siberia’s taiga forests are among the last unexplored places, an endless harsh environment of snow and animals. An aerial survey in 1978 combed an area near Mongolia’s border where, supposedly, no person had ever set foot before. To their surprise, they found a family. Most of the adult children had never seen another human, and two became hysterical when geologists entered the cabin. After things calmed down, their incredible story unfolded.

They were the Lykov family.[10] As Old Believers, the parents escaped persecution under Stalin by entering the taiga in 1936. There they stayed undiscovered for over 40 years, unaware of World War II. When the geologists arrived, the mother, Akulina, had died from starvation 17 years previously. The father, Karp, lived with his sons Savin (45) and Dmitry (36) and daughters Natalya (42) and Agafya (34). The two youngest had been born in the wild.

The Lykovs were intelligent and resourceful, but religious beliefs and years of famine turned fatal in 1981. As an Old Believer, Dmitry refused treatment for pneumonia. In the same year, kidney failure killed Natalya and Savin. Agafya buried her father in 1988. The sole survivor, Agafya refuses to join civilization and, now in her seventies, still lives in the family home.