“Seize the moment. Remember all those women on the ‘Titanic’ who waved off the dessert cart.”? Erma Bombeck

Travelling goes hand in hand with trying out unfamiliar exotic cuisine. And while you’re at it, why not try it in a unique restaurant? On this list are some of the most unusual restaurants in the world, ready and waiting to serve locals and tourists and provide a memorable experience. 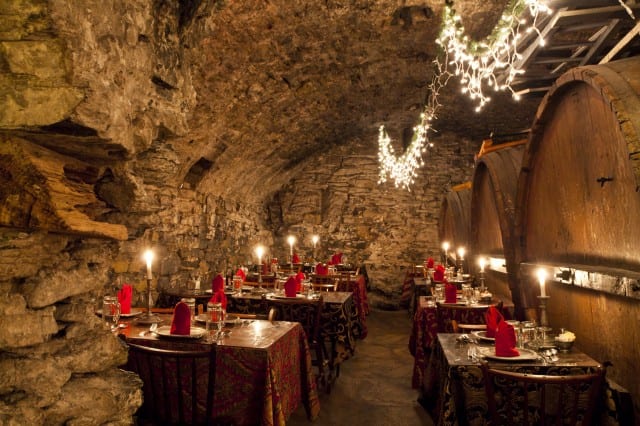 If you don’t suffer from claustrophobia, then dining at The Catacombs inside Bube’s Brewery in Pennsylvania might just be for you. After joining the host and going on a tour of Bube’s Brewery, you must descend 43 feet underground to get to the cellar that makes up the eatery. The menu has fantastic offerings that include gourmet options and Grade A steak.

What’s more, it is said that Bube’s Brewery, which contains the cellar, is haunted. Ghosthunters have investigated the brewery and allegedly found evidence of ghostly activity. Because of this, the brewery has decided to hire a paranormal investigation team to entertain diners with spooky tales of supernatural activity. 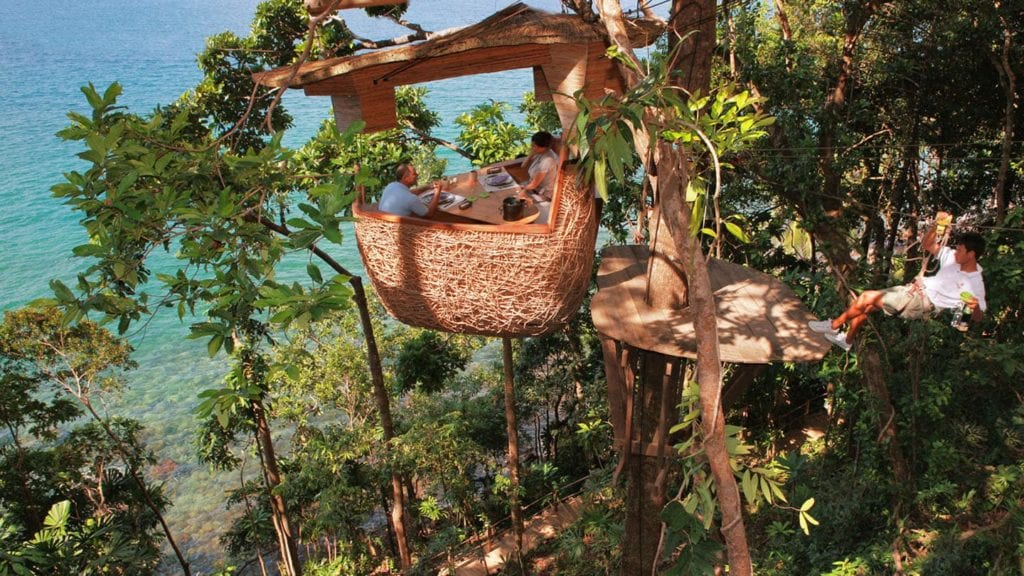 If you’ve ever wanted a bird’s eye view while enjoying a gourmet meal, then look no further than the Soneva restaurant in Thailand. You will be hoisted up amongst the trees in the Koh Kood rainforest while seated in a ‘bird’s nest’ or bamboo pod. The bamboo pod can hold 4 people and was woven by a local craftsman.

Once you are settled, your personal waiter will use a zip-line to get you your food and drinks while you enjoy the spectacular view of the ocean and boulders in the distance. Additionally, the cozy atmosphere of the pod itself is said to ease the minds of those who are afraid of heights. 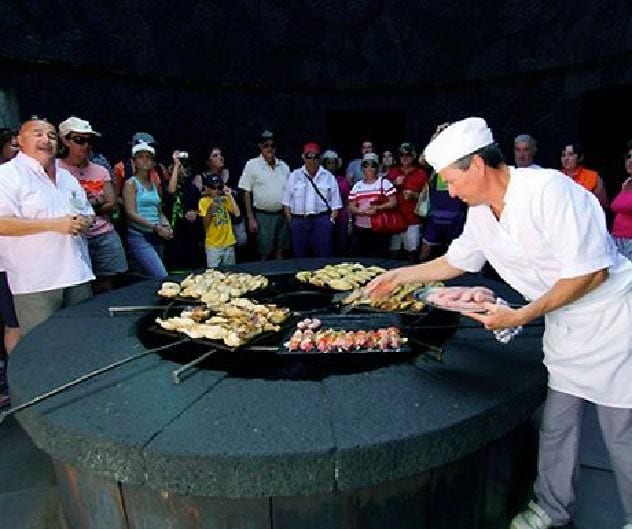 Withstanding the heat or getting out of the kitchen, is taken quite literally at the El Diablo restaurant in Spain. This eatery sits on nine layers of basalt rock on the island of Lanzarote and incorporates a giant grill laid across a hole in the ground, which just happens to lead down into a dormant volcano.

6 feet below the grill, lava bubbles at 400 degrees Celsius which generates the desired temperature to cook delicious meals. While you wait for your food, you can enjoy the view of Lanzarote’s Timanfaya National Park and the Fire Mountains which consist of around 100 volcanos. 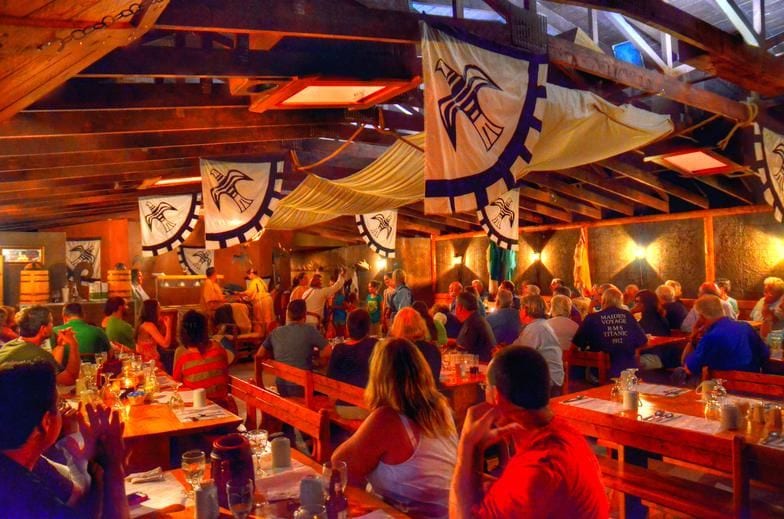 The Great Viking Feast Dinner Theatre is located at Fishing Point, St. Anthony, Canada and is only open between June and September. Here you can immerse yourself in Viking culture and enjoy a buffet of food believed to have been eaten by the Vikings. The restaurant itself is a 100-seat Viking sod hut.

You can also join in the fun of ‘presenting’ a court case to the Lawspeaker (as a customer) and deciding on the fate of the Vikings or other customers. At the end of the evening you will have become an honorary Viking and receive a special certificate. 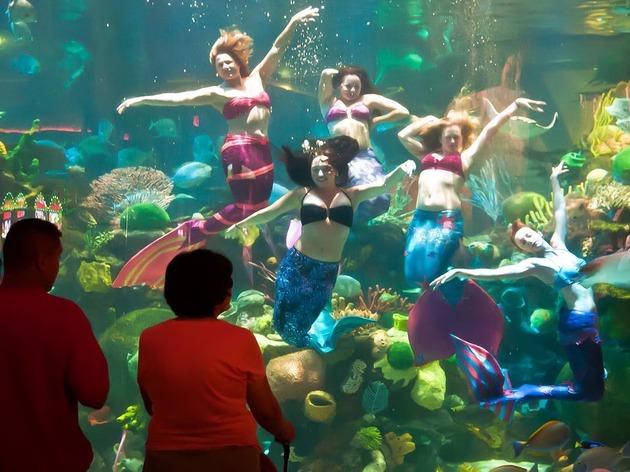 There are a lot of things to do and a lot of fine dining experiences in Las Vegas. One of the most unique restaurants off the Las Vegas Strip is Mermaid Lounge. The restaurant & lounge offers excellent food, while customers can enjoy the 117,000-gallon aquarium that houses 4000 tropical fish as well as mermaids.

The mermaids can be seen on Thursdays through Sunday and are usually in the tank for about 2 hours at a time. They are trained water dancers and love interacting with kids and posing for pictures with them. What’s more, on Saturdays, there is a Mermaid School for children between the ages of 7 and 12 that teaches them how to swim with mermaid tails. 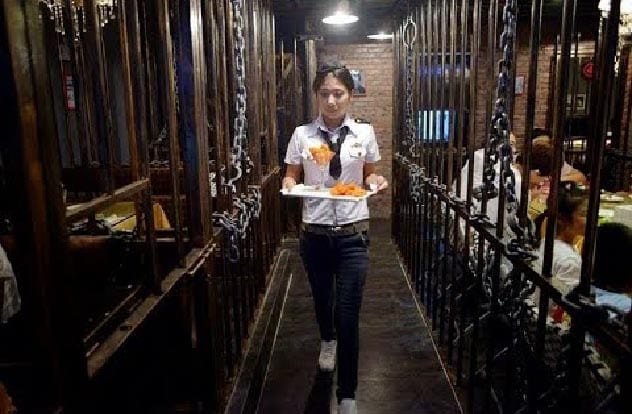 The Lockup is referred to as an izakaya and is focused on drinks and food is a side item. In this restaurant you can order individual items off the menu and pay full price or select an eat/drink package that you can enjoy in a ‘dungeon’ room.

Before you sit down however, you must walk through a corridor where things basically ‘jump out’ at you to scare you. When you arrive in the actual restaurant, a waiter dressed as a police officer will come over to ‘arrest’ you after you ‘confess’ to your crime of choice. If you are in a group, only one will be handcuffed and the whole group led to a table.

At some point during the meal, sirens start wailing and lights start flashing before ‘escaped prisoners’ start running through the restaurant. You then get to watch the police officers run after and catch them and lock them up again while you finish your food. 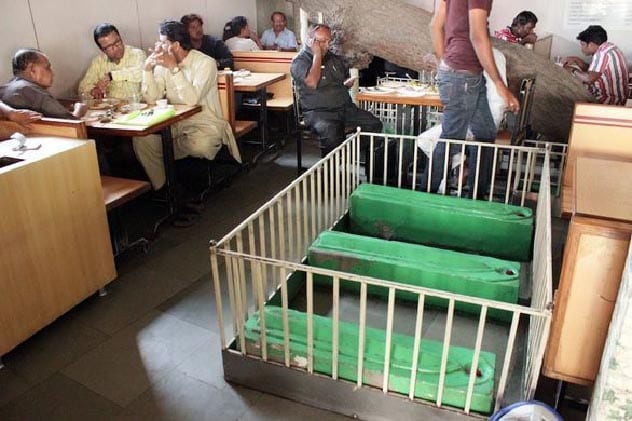 If you want a spooky atmosphere while eating, the New Lucky Restaurant in Ahmedabad, India specializes in exactly that. Considering that the restaurant is built within a cemetery, they didn’t have to do much to bring the creepy factor.

Owner, Krishnan Kutti, decided to build his restaurant ‘around’ the graves instead of over them. It is believed that the graves belonged to Muslim followers of a 16th century Sufi saint and steel bars have been erected around them for protection. The green coffins (12 in total) are cleaned daily and flowers placed near them as a sign of respect.

The restaurant is very popular especially since Kutti claims that eating among the dead brings good luck.

The Redwoods Treehouse restaurant in New Zealand started out as a marketing stunt by the Yellow Pages. All the parts and services used in the design and construction of the restaurant were found in the yellow pages. It was originally named the Yellow Treehouse and was open for casual dining between 2008 and 2009 before changing ownership and name.

The entire restaurant is in the shape of a chrysalis and hugs a redwood tree 10 metres up. There is a tree top walkway that leads to the restaurant which can hold 30 guests at a time. These days the restaurant is only open for private functions such as parties and corporate dining. 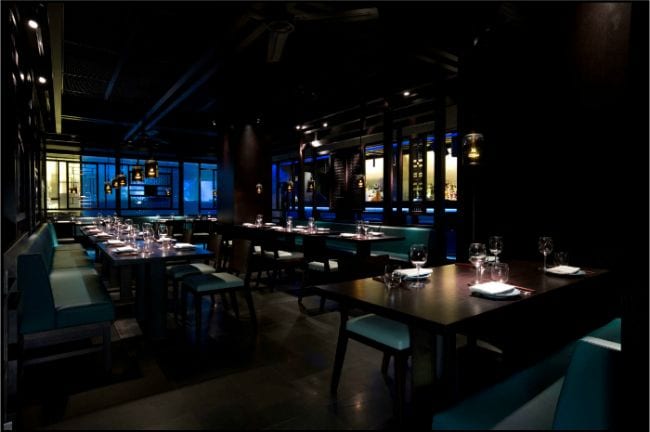 Following in the same trend as sign language restaurants, Dans le Noir in London offers a sight deprivation experience. Food is served in a room dark enough that guests can’t see their hands in front of their faces and the wait staff are visually impaired.

The first restaurant was opened in Paris in 2004 with the aim of allowing those who have sight to experience what it would be like to be blind. Another goal was to create more employment opportunities for the blind.

When guests arrive at the eatery, they are instructed to leave their phones and cigarette lighters in a locker and then get in line with their hand on the shoulder of the person in front of them. The line is then manoeuvred into the dark eating area, with the assistance of the waitrons.

The best part, according to several patrons, is the opportunity to let go of conventional table manners and eat food with your hands or drink your beverage straight from the bottle. 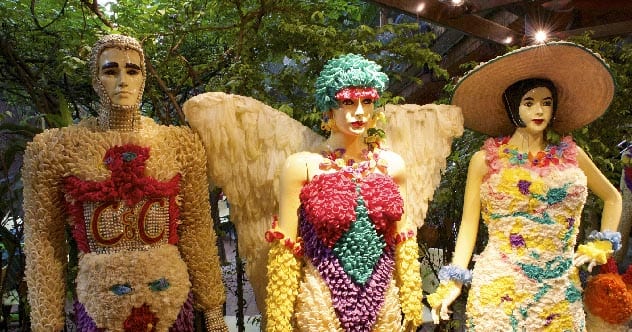 Walking past Captain Condom and seeing a Santa Claus sporting a condom beard, is just the beginning of the educational experience patrons have while dining at Cabbages and Condoms in Bangkok. There is even a Christmas tree bedazzled with condoms as decorations.

The restaurant was opened by PDA (The Population and Community Development Association), who believe that birth control should be as easily accessible as cabbages in a market. The proceeds go towards community HIV/AIDS outreach programs and safe-sex awareness. The entire restaurant buys in to the concept with the wait staff wearing inflated condoms as hats. If you look closely, you will also see condom-shaped light fixtures in between the regular ones. At the end of your meal, guests receive a condom as a gift instead of the usual mint. Also, should any of the male patrons feel the need to have a vasectomy after their meal, they can undergo the procedure for free in the family-planning clinic next to the restaurant.

10 Not Safe for the Office Snacks