There is a monster hiding in your house. Many, actually. They’re watching you, waiting. They’re in your refrigerator, your oven, and your kitchen cabinets, because it seems one of the most dangerous things you handle each day is your food. The ways in which your diet can come back to haunt you range far beyond heart disease and diabetes. Human history is rife with horrific episodes brought about by nothing more than this most basic necessity. One look at these ferocious foodstuffs, and you’ll never turn your back on your local supermarket again. During the 1800s, England’s population was growing faster than ever before. In fact, by 1850, London had become the largest city in history. But this sudden, enormous growth led to serious shortages of day-to-day items, and profiteering manufacturers were quick to respond . . . by packing their products with whatever they could find lying around their garage.

Plaster of Paris and even chalk were used to stretch out actual ingredients, but the worst was the use of toxic alum.[1] Safer versions of alum are used for things like pickling, but the dangerous variety—used in modern-day washing detergents—was used heavily in bread. Not only did it allow for more loaves per batch, but it also gave them a more attractive white color. The thing is, alum prevents actual food from being absorbed by the intestines. In the end, this practice led to an epidemic of severe malnutrition, diarrhea, and even the deaths of many children, as starving citizens were unable to digest what meager scraps they could find. The early 20th century saw the American South gripped by a nightmarish new disease. Sickening skin lesions and madness were the calling cards of the mysterious malady, which took over 100,000 lives between 1906 and 1940. Worse yet, no one could figure out where this “pellagra” even came from.

That is, until Dr. Joseph Goldberger came along. The Pennsylvania physician joined the Public Health Service in 1899 and had spent the last few decades traveling the country solving medical mysteries. It occurred to him that the disease only struck the especially poor, who survived on a diet composed almost entirely of nice, cheap corn.

His dietary findings didn’t go down well with Southern doctors, though, who were convinced the illness was caused by a germ. So Dr. Goldberger proved it wasn’t contagious by swallowing the scabs from an infected patient’s sores as well as infected urine and feces.[2] He didn’t catch the dreaded disease, and his work helped to unmask pellagra as a simple niacin deficiency. 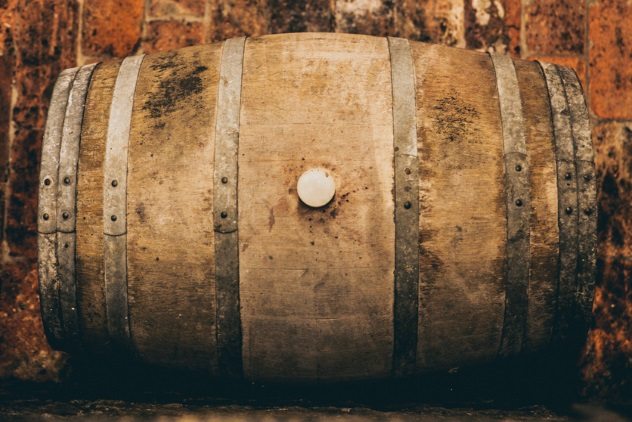 A symbol of class and refinement for millennia, wine would seem like one of the least harmful things on the planet (unless you count the occasional drunken fistfight). But just try telling that to English nobleman George Plantagenet.

The duke of Clarence and brother of King Edward IV, Plantagenet found himself involved in a Game of Thrones–style medieval power struggle in the late 1400s. Constantly at odds with his brother, he began scheming to remove him from the throne. However, before his rebellion could even start, King Edward beat him to the punch. Plantagenet was secretly imprisoned in the Tower of London and executed on February 18, 1478.

Despite beheading being the traditional fate of traitors, Edward instead had a final insult planned for his sibling. He ordered Plantagenet drowned in a barrel of his favorite drink, malmsey wine.[3] After his uniquely ironic execution, some believe his body was left in the barrel when it was sent off to be buried. In the early 20th century, the world stumbled upon a miracle. By simply adding a small amount of a newly documented element, any humdrum object could be made the stuff of fairy tales. Clock faces and cosmetics were dressed up with the miraculous glowing material. Candy manufacturers even began adding it to their chocolate for its supposedly invigorating qualities. Too bad it was radioactive.

Radium-infused chocolate was only one dangerous product that people were woefully eager to cram in their mouths. Wines and water were also packed with radiation before the dangers started to make themselves known. A 1925 article in The New York Times heralded the end of the radium age with the announcement of a nightmarish new disease: radium necrosis. It was basically radiation poisoning of the jaw caused by ingesting radium. Victims found the flesh and bone of their lower faces dying and falling away or developing grotesque tumors.[4] Death followed shortly after. For some, eating raw fish may be a terrifying prospect in its own right, but a certain Japanese delicacy gives sushi-phobes another reason to fear. Blowfish, or fugu, is prepared with extreme care by master sushi chefs. The law demands it. The government regulates the process carefully because a single mistake could end the life of a customer.

The organs of the blowfish are filled with a substance called tetrodotoxin.[5] Should any taint the meat, this unbelievably nightmarish poison begins with a subtle numbing of the unlucky customer’s mouth. Soon, however, the numbness evolves into full-blown paralysis, which slowly migrates down the body. The victim is left completely unable to move but fully aware. Death finally comes when the paralysis reaches the lungs, and the still-conscious diner slowly suffocates. Luckily, due to the strict laws concerning its preparation, only 23 people have been killed by fugu in the last 16 years. Still, not many takers. During the 1600s, a terrible war was waged between the English and the Dutch. It was a brutal and bloody conflict that lasted for years. It was over something we like to sprinkle on eggnog.

Humble nutmeg found itself at the center of this bizarre international conflict because it had become something of a status symbol.[6] Nobles of the era would stockpile spices like gold, and the trendiest new addition to any spice cabinet was nutmeg. The seeds were prized for their exotic flavor, their supposed aphrodisiac properties, and the belief that they could actually cure the Black Death. Unfortunately, though, they could only be found on a single Indonesian island chain, the Bandas. The quest to monopolize the nutmeg industry led Dutch and English forces to commit horrors ranging from torture to mass slaughter, upon both enemy combatants and the innocent residents of the islands.

Luckily, the bloodshed finally ended in 1667, when England signed a treaty handing over control of their only remaining Banda island. They didn’t get much in return, just the Dutch-controlled island of Manhattan. Throughout history, typhoid fever has claimed countless lives. Minor epidemics were fairly common until recently, but in 1903, the city of Ithaca, New York, faced a sudden and unusually aggressive outbreak of the dreadful disease.[7] Construction had recently begun on the Six Mile Creek Dam, and the shady owners had neglected to include a filtration system of any kind. Conditions were rough for the builders as well; the entire crew was forced to share a single outhouse, leading many to simply use the creek. However, the final nail in the coffin was that a few of the builders had recently moved from an area of Italy notorious for typhoid outbreaks.

The results were as obvious as they were devastating. Ithaca residents began experiencing crippling stomach pain and dangerously high fevers. The sickness had spread far and wide before anyone figured out their drinking water was to blame. People could only watch as friends and family began to succumb. In the end, 82 people, including 29 college students, were killed. Medieval England just couldn’t catch a break. As if constant war and the Black Plague weren’t enough, folks had a more obscure reason to lock themselves in their mud cottages: English sweating sickness.

With outbreaks occurring mainly during the summers of the 15th and 16th centuries, this strange illness came on fast and killed faster. Within 24 hours of infection, the victim would sweat profusely, experience shortness of breath and heart palpitations, and finally drop dead. Despite much documentation in everything from official records to fiction (Shakespeare even mentioned it in his play Measure for Measure), no one really knew where it came from.

Researchers now believe the hantavirus was to blame.[8] The symptoms are eerily similar, and just like the Black Death, it is transmitted by rodents. Medieval England had no shortage of rats; the vermin were notorious for chowing down on stores of grains like wheat and oats. While eating, the incontinent beasts would leave their urine behind, contaminating the food. Unlucky peasants would then sit down for dinner, and an epidemic would be born. 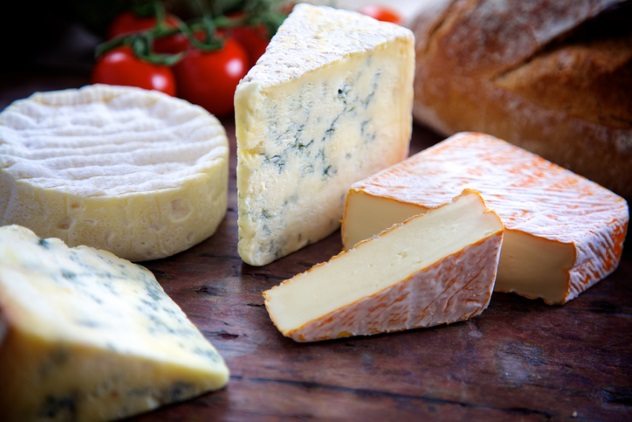 Listeria monocytogenes is a particularly nasty bacterium. In humans, it causes an unpredictable condition called listeriosis, which can be as minor as a touch of the flu or infect the nervous system, causing convulsions and death. It also really seems to like cheese.

Products containing unpasteurized milk are prime targets for Listeria. In 1985, California’s Jalisco Products produced a batch of cheese without following pasteurization procedures. The result was one of the largest listeriosis outbreaks in history.[9] Southern California was devastated by the deadly neurological disease, which hit pregnant women and newborn babies the hardest. The death toll topped out at a terrifying 62 when all was said and done, including many stillbirths.

And this wasn’t an isolated incident. Listeriosis outbreaks linked to cheese are insanely common, even now. Maybe order a side of antibiotics the next time you hit the pizza joint. In the Middle Ages, Europe was subjected to what can only be described as a full-on living nightmare. A strange plague, known as St. Anthony’s fire, began to spread. Victims suffered extreme burning sensations in their hands and feet, the feeling of insects crawling beneath their skin, and horrifying hallucinations. The infection sometimes even caused the flesh of the hands and feet to die, requiring amputation.

It wasn’t until much later that botanists were able to crack this “holy fire.” The fungus Claviceps purpurea infects many grain plants, but it seems especially fond of rye.[10] Small black growths called ergots grow alongside the grains on tainted plants and were often mistakenly ground up with them in medieval mills. Bread made from the flour would then infect humans, leading to the hellish symptoms.

Despite the horrors, the study of ergot has led to many advances in medical science, like cures for migraine headaches and psychological disorders. It has also led to advances in psychedelic science by giving the world LSD.

Read more about foods that want to kill you on 10 Disturbing Foods That Might Harm You and 10 Odd Cases of Food Poisoning.