His machines used everyday objects, in addition to humans or animals, in a creative, convoluted way that really would work. For example, his self-operating napkin machine wipes his fictional Professor Butt’s mouth automatically using a contraption that starts with the spoon to his mouth pulling a string, along the way throwing a cracker to a toucan, dropping a bucket, igniting a lighter which sets off a rocket, cutting another string that drops the napkin to his mouth to wipe it.

Goldberg lived from 1883 to 1970, but his cartoon inventions have inspired popular culture ever since. Let’s look at 10 places you might find a Rube Goldberg-inspired machine.

Many board games have tried to capitalize on the popularity of Rube Goldberg machines. Some of these include Internal Contraption or Factory Fun.

The most iconic machine game, however, is the 1963 game Mouse Trap. Mouse Trap requires players to gradually build a contraption as they play the game and then finally using the contraption to catch a mouse playing piece. Steps along the way include a shoe kicking a bucket, a diver, and a bathtub. The original game box illustration looks much like Rube Goldberg’s cartoons, even using capital letters to designate steps in the machine, just as his cartoons did.

This game has been so popular that it even inspired a life-size version of the game that toured the United States and taught people about basic machines.[1]

Computer games and apps have been inspired by these fun machines, sometimes without it even being the game’s intent. For example, one of many Goldberg machines built in Minecraft performs an enormous number of actions that alter the scenery before finally ending by blowing up a tower.

Other games were designed specifically for building Rube Goldberg machines, such as The Incredible Machine computer game or the official game, Rube Works Game. These games allow you to build your own machine to complete a challenging task of some kind. Typing “Rube Goldberg” into the Google Play or the App Store will bring up lots of games you can try, from educational to purely entertaining. In addition to these, many other games seem to be influenced by Rube Goldberg machines, such as Pull the Pin, Cut the Rope, and Fruit Ninja.[2] 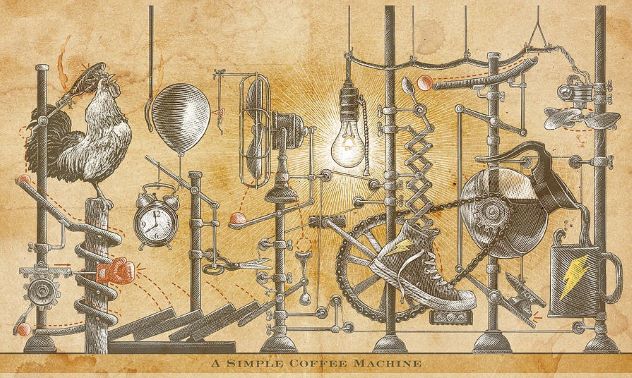 Goldberg himself created over 50,000 cartoons that included his crazy machines. Other artists have taken on the challenge and included Goldberg-type machines in their own artwork.

In some cases, the artwork clearly portrays a Goldberg machine. For example, Clint Hansen’s, A Simple Coffee Machine. Others are a little more abstract or surreal and just have Goldberg-like elements, like Vanessa Bates’s Klockwerk Orange Patent Pending or Mike Savad’s Steampunk—Coffee Break.

Some of the more recent artistic conceptions don’t even show a machine that works but instead express frustration, chaos, or other emotions about a topic in a machine-like way, as seen in Election Recap by Peter Kuper. This is a very Rube Goldberg-like cartoon on the first take, but looking closely, you can see that skips are stepped—alphabet letters are missing. There is no “A” telling us where to start or end. The egg on Uncle Sam’s face and various people booted out of the room express something about the election that we might feel.[3]

YouTube has been a perfect medium for people to share their homemade Goldberg machines. Some popular machines have been built for everyday tasks like turning pages, watering plants, and lighting Christmas trees.

One of the most popular machines on YouTube was created by OK Go, with their “This Too Shall Pass” machine. This one started with a toy truck knocking over dominos and included various devices starting music playing and individuals singing along its long path. Some of the most interesting additions to the machine were spoons playing water-filled glasses, a falling piano, a typewriter, a smashed television, and the grand finale—paintball guns firing at the singers.

Like many Rube Goldberg machines, this one can only be activated once—at least without rebuilding parts of it. [4]

Rube Goldberg was, unsurprisingly, an engineer. Because the machines show interesting principles of engineering and physics, they are often used in education. An organization founded in Goldberg’s name offers lesson plans and contests, and many schools have students create Rube Goldberg machine-making projects.

In addition to teaching science principles, schools have used Rube Goldberg projects to teach project management and leadership. Building the machines are supposed to help with creativity and problem-solving skills, though some students have just claimed they learned a lot about what you can do “with random junk.” Regardless of why the machine is built, no one would deny that the process is fun.[5]

Any toys that use chain reactions could be considered Rube Goldberg in style: marble runs or roller coasters, Lego contraptions, and domino chains. All of these trigger a chain reaction, the key Goldberg feature, from one little push, drop, or other action. A lot of different construction sets could be used to make crazy contraptions, even if that wasn’t their original intent.

But, of course, you don’t need a special product to make a Rube Goldberg contraption. Gather up anything you have around the house that moves or can be made to move. You can include objects that have various weights, string and rope, duct tape, broken pieces of toys, kitchen utensils, balloons, and anything laying around that seems to have no use. Search through the garage, the toy box, and the attic, and you will find all sorts of possible machine elements.

What can you trigger with a running blow dryer? What can you use to turn it on? How can you get a toy car rolling down a track? Anything you can think of is game.[6]

How to Pass the Salt While Social Distancing

Schools aren’t the only places making these contraptions. A lot of families make them at home. In fact, in 2020, during COVID quarantines, homemade Rube Goldberg machines became particularly popular on YouTube. Some took a humorous look at social distancing by creating machines to allow space for simple tasks like passing the salt across the table without getting near each other. One family made a complex machine throughout the house that ended with a foosball goal. I’m sure it was much more fun to make that one than to clean it up!

Making Rube Goldberg machines is a great way to entertain children when they aren’t in school. Just get them started with launching a teddy bear off the dresser by knocking over a stack of books with a nerf gun dart and see where they take it from there!

Of course, they don’t have to destroy your house with their contraptions; they can just draw them as Goldberg did. Some kids (or kids-at-heart) might enjoy this more because they can include elements they couldn’t practically create in real life—like a canary that sings when something pulls its tail feathers or a monster truck that triggers an avalanche, thereby chasing a giant snow-spider into a booby-trapped cave.[7]

One of the most common final results of a Rube Goldberg machine is to make a basketball or other ball shot through a complex chain reaction of silly events. Even the Harlem Globetrotters have gotten into the contraption craze and made their own version.

Red Bull created an ad with their own sports machine that featured various famous athletes from skydiving to skateboarding and racecar driving. The stunt of each athlete triggers another stage of machines that releases the necessary sports equipment for the following athlete, blending human and machine in a balanced way.[8]

A few musicians have even invented music playing Rube Goldberg machines. One machine, for example, uses dropping marbles to make music. Another features various spinning components and strings that drop balls on piano keys to play a song. One of the most fun and complex Rube Goldberg music machines incorporates a variety of percussion instruments—drums, cymbals, chimes, and xylophones create a beautiful rhythmic melody as balls fly through the machine—with a little help from a computer.[9]

Movies are a natural place for Rube Goldberg machines because they can best be enjoyed visually as the chain reaction unfolds. From Home Alone and Toy Story to The Goonies and Edward Scissorhands, wacky machines inspired by Rube Goldberg are all over the movies.

Some of the most memorable movie machines are breakfast machines, seen in such classics as Chitty, Chitty, Bang Bang, Back to the Future, and Pee Wee’s Big Adventure. It’s the perfect nerdy-but-entertaining way for an eccentric character to prepare a meal.

A slightly less obvious Goldberg machine shows up near the beginning of Raiders of the Lost Ark when Indiana Jones triggers a death machine in a cave, triggered by removing an idol from its perch [LINK 35]. Ask yourself why removing the idol didn’t just cause instant death in a quick, decided way. Well, because Rube Goldberg machines are much more entertaining (plus, our hero needed a chance).[10]