Edgar Allan Poe. Can you think of a name more synonymous with spine-tingling macabre literature? A master craftsman of prose and poetry alike, Poe dwells in that dark corner of our literary consciousness, along some creaky corridor laden with dust and cobwebs. Even more than a century on, reading Poe still feels like walking a razor’s edge between grim amusement and irrevocable madness. Here is a list of ten of Poe’s best-known tales and poems. Halloween’s still a few months off, but there’s no harm in starting early… 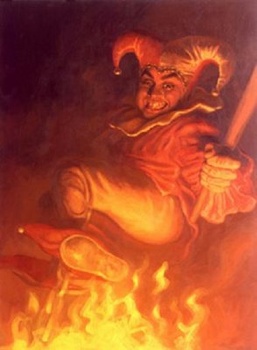 A dwarfish court jester serves as the titular character of this fiendish revenge tale. Hop-Frog is the childish king’s favorite entertainer. But when the king and his foppish cabinet humiliate Hop-Frog’s friend Tripetta, he decides to play a prank of his own. He dresses them as apes for the king’s grand masquerade ball, and then sets them on fire in front of the shocked crowd. As he escapes with Tripetta, Hop-Frog revels in his vengeance, declaring “This is my last jest.” 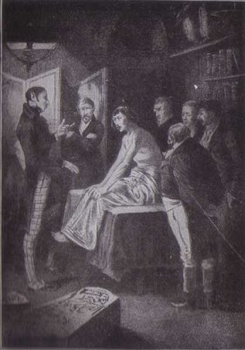 In the mid-19th Century, the pseudo-science of mesmerism was all the rage in the salons of America’s bourgeoise, and Poe made it the central theme of this gruesome short story. On the verge of death from tuberculosis, one M. Valdemar agrees to be hypnotized in a crack-pot experiment in immortality. Unfortunately for Valdemar, his soul becomes trapped in his now-dead and increasingly yucky earthly remains. Definitely one of the more graphic Poe stories, and among one of several to deal with the terrors of deathly consciousness. 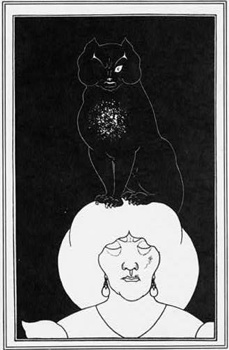 The narrator and his wife own several pets. Among them is a large black cat named Pluto. One day, in a drunken rage, the narrator blinds Pluto in one eye, and then later hangs the cat from a tree. Mysteriously, the house burns to the ground, leaving a silhouetted mark of a cat hanging from a gallows. Later, our narrator acquires another cat eerily similar to Pluto. Again, incensed with drink, he attempts to kill the cat but murders his wife instead, hiding her body in a cellar wall. When the police come sniffing around they’re drawn to a wailing sound coming from the wall. They then discover the wife’s body, atop which sits the screeching black cat, condemning its master for his terrible crime. [Image: Aubrey Beardsley’s “Poe’s Black Cat”]

7
The Murders in the Rue Morgue
published 1841 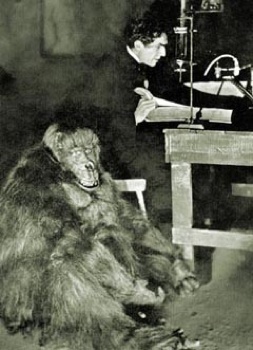 C. Auguste Dupin is a man who lives in Paris, and he takes it upon himself to solve the shocking murder of two women after a suspect has already been arrested. Multiple witnesses claim to have heard the murderer, but report different languages being spoken. Later at the crime scene Dupin discovers a hair that cannot be human. It is then learned that the murderer is in fact an escaped Ourang-Outang. This is considered to be the birth of the detective story. And face it, what’s scarier than a massive, knife-wielding primate?

6
The Cask of Amontillado
published 1846 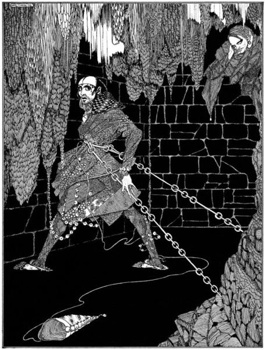 In some nameless European city in some unspecified year, old Montresor finds himself with a grudge on poor Fortunato, and entirely too much free time to think about revenge. Montresor waits until Fortunato is good and drunk at the carnival before he lures him to his wine cellar for a swig of fine Spanish sherry. He then chains an increasingly-sober Fortunato to a niche in the wall and ruthlessly seals him in. And there he remains forever. “In pace requiescat.”

5
The Masque of the Red Death
published 1842 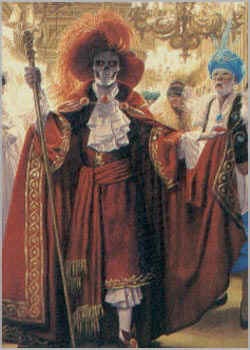 Prospero, a ridiculously-detached potentate whose domain is being ravaged by a plague called the Red Death, invites his wealthy friends to take refuge in an abbey and leave the poor to their fate. During a lavish masquerade ball, a mysterious cloaked figure wanders through the abbey. Thinking it to be an uninvited guest, Prospero confronts the figure, and to his horror discovers that it is the embodiment of the Red Death itself. Decadent Prospero and all his guests then fall ill and die, unshielded and unexcluded from the misfortunes of the world at large.

4
The Fall of the House of Usher
published 1839 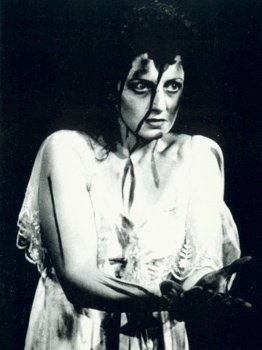 An unnamed narrator arrives at the home of reclusive basket case Roderick Usher and his sickly twin sister Madeline. Roderick suffers from extreme sensitivity to light and sound, anxiety and hypochondria. Madeline suffers from a wasting disease, and she eventually dies and is buried in the family crypt within the cavernous mansion. On a stormy night, the narrator and Roderick begin to hear screeching and crashing noises in the house. We learn that cataleptic Madeline had not died when she was buried, and she has returned to confront her mad brother, who in turn dies of fright. The narrator then flees as the cursed house is swallowed by the murky bog. 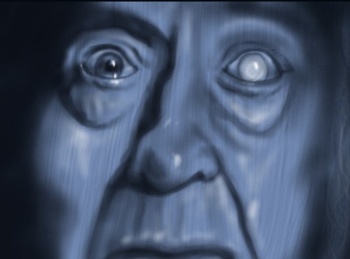 Here we follow a narrator trying to prove his sanity to himself after murdering his elderly roomate. Driven mad by the old man’s “vulture-like” eye, the narrator slays him in his bed and hides the dismembered corpse beneath the floorboards. When the police show up to question him, the narrator finds himself at the mercy of his heightened senses. He begins to hear a steadily-increasing heartbeat coming from the floor. Sure that the police must hear it too (they don’t), he confesses to the crime. Recounting the events, presumably to a judge, the murderer’s innocence is less important than his sanity, or lack thereof.

2
The Pit and the Pendulum
published 1842 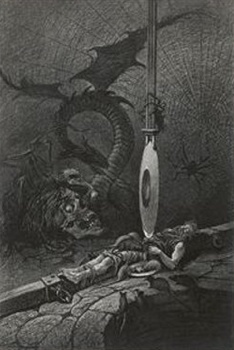 This story follows the horrors endured by a prisoner of the Spanish Inquisition. Guilty of an unknown crime and placed in a completely dark chamber, the protagonist is subjected to tortures only Poe could dream up. Drifting in and out of consciousness, he discovers that he is strapped to a platform above which swings an slowly-dropping pendulum blade. He eventually finds a way out and is saved by an unlikely rescue. This story is unique in that it relies almost entirely on senses such as sound to convey primal fear rather than the supernatural. The only visual descriptions are fleeting at best, and only serve to heighten the terror of what is unseen. 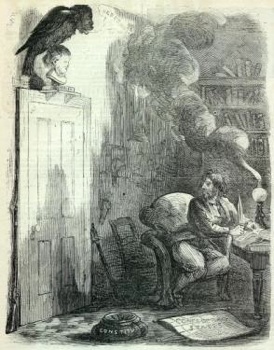 This narrative poem is undoubtedly Poe’s most famous work. Musical, mysterious, even maddening, Poe spins the tale of a grieving lover who is visited by a talking Raven on a cold winter’s night. At first, the narrator is curious as to the purpose of the Raven’s one word: “Nevermore.” He is soon overcome with memories of his lost love Lenore, and begins to feel her presence. Believing the Raven to be a messenger from the next world, the narrator implores it to say if they will be reunited in heaven, to which the Raven responds “Nevermore.” We follow the narrator’s descent into madness and despair as the Raven sits forever above his chamber door, forever tormenting him with its call.