For centuries strongmen have been entertaining crowds by their demonstrations of strength. Many strongmen relied on unique acts that would set them apart from other strongmen and usually claimed they were the only one in the world to perform such a feat. This list includes 10 of the most amazing and unique acts performed by the strongmen of yesteryear. 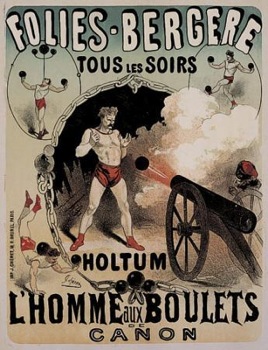 John Holtum, was a strongman from Denmark who drew immense crowds in cities around the world by perfecting the cannonball catch. He lost a couple of fingers the first time he tried, but he eventually got his technique worked out. With Holtum on one side of the stage and a cannon on the other, an assistant would fire a 50-pound ball which Holtum caught with his gloved hands and chest. The feat required immense strength, steely nerves, and lightning-fast reflexes. Several skeptics questioned the legitimacy of his act but were convinced after Holtum brought them on stage for a demonstration. Holtum appeared before Royalty in Europe and was a great success in the US as well.

Interesting Fact: Holtum’s initial attempt to catch the ball resulted in his losing three fingers. Holtum offered 3,000 francs to anyone who would perform a similar feat, but no one ever took him up on his challenge. 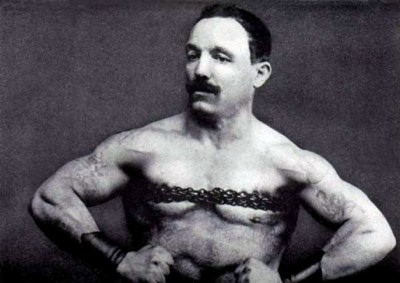 Gasnier was born in France and was one of the first most influential of the old time circus strongmen and performed for Barnum and Bailey Circus. Gasnier could rip a deck of cards in half but his most famous feat was breaking a chain over his chest while expanding his ribcage.

Interesting Fact: Gasnier stood only 5’ 3 tall and weighed just 143.5lbs and was able to lift a dumbbell weighing 260 lbs over has head. A feat that many strongmen twice his size could not do. 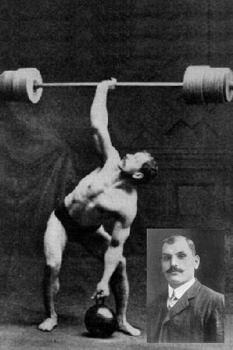 Arthur Saxon was a strongman and circus performer from the late 19th century into the early 20th century. Saxon made his name famous by a lift called the “bent press”. This is a type of weight training exercise where a weight is brought from shoulder-level to overhead one-handed using the muscles of the back, legs, and arm with which he set a world record of 370 lbs. Eventually Saxons’s two brothers, Kurt and Hermann Henning joined the group as well, forming the “Saxon Trio,” The Trio performed with circuses all over Europe.

Interesting Fact: During his performances Saxon would claim the act could not be repeated even by the famous Muscleman Eugen Sandow (see # 3) and would open the stage for anyone who would want to attempt it. Unbeknownst to Saxon, in 1898, Sandow was in the audience and accepted the challenge. Initially, Sandow was unable to replicate the lift but then eventually was able to do it. Sandow took the Saxon Trio to court and won the case with the Judge ruling that he had handled the bell in exactly the same way as Saxon which debunked Saxon’s claim that Sandow failed the lift. 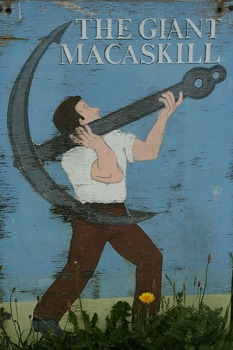 MacAskill was born on the Isle of Berneray in the Sound of Harris, Scotland and emigrated to Nova Scotia . MacAskill was known as the world’s largest “true” giant, (no growth abnormalities). By the time he was 20 he was 7 ft 4 in (223 cm), eventually reaching 7 ft 10 in (236 cm) and weighed 580 pounds. In 1849 he entered show business and went to work for P.T. Barnum’s circus appearing next to General Tom Thumb. MacAskill most famous feat was lifting a ship’s anchor weighing 2800 lb. to his chest . He also had the ability to carry barrels weighing over 300 lbs. apiece under each arm.

Interesting Fact: Queen Victoria heard stories about MacAskill’s great strength and invited him to appear before her to give a demonstration at Windsor Castle. She proclaimed him to be “the tallest, stoutest and strongest man to ever enter the palace”.
Pierre Gasnier

Thomas Inch held the titles of Britain’s Strongest Youth and Britain’s Strongest Man. However Inch is best know for a dumbbell he created now called the “Inch dumbbell” The dumbbell weighed 172 lbs 9 ounces. To keep the dumbbell from bending it was made with extra thick handles which ended up making it very popular because it was so difficult to lift. In his day Thomas Inch was one of the few people that could lift the dumbbell and would offer 200 British Pounds to anyone who could.

Interesting Fact: At the age of 72 Thomas Inch could still lift his namesake dumbbell. Even today very few people can lift it. 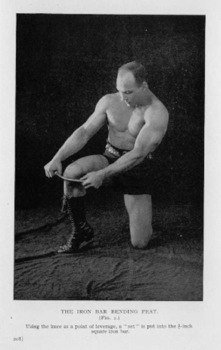 Zass was born in Vilna, Poland, but lived his early years in Russia. Like many other strongmen of his era, Zass was motivated to develop his strength when he attended a circus and saw the feats done by the circus strongman. Zass started with bending green branches and twigs, climbing trees, and running with home made dumbbells and barbells. Later he trained under some of the great Russian professional strongmen. Zass developed tremendous strength that allowed him to carry a horse on his shoulders but his greatest talent was bending steel bars and breaking chains which were the center piece of his exhibitions.

Interesting Fact: In 1914, While serving in the Russian army during the First World War, Zass was wounded and taken prisoner by the Austrian forces. As a prisoner of war he continued to develop his strength with the use of isometrics by pulling on the bars and chains. Zass escaped from prison and never returned to his homeland. 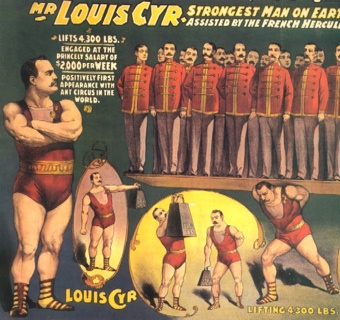 Louis Cyr was born in Quebec and weighed close to 18 pounds at birth. At the age of twelve Cyr was a lumberjack and stories of his amazing strength told by his coworkers are legendary. At the age of seventeen, Cyr stood five feet ten inches but weighed 230 pounds. His first public display of strength was in Boston during a strongest man competition when he stunned the crowd by lifting a horse clear off the ground. Cyr returned to Quebec in 1882 for a brief tour and performed many acts of strength. Strongmen feats are often exaggerated and Louis was no exception to this. However many of his feats were formally documented by witnesses including holding a platform of 18 men on his back. At the conclusion of his tour, Louis became a police officer in Montreal.

Interesting Fact: A district of Montreal is named Louis Cyr in his honor located in Saint-Henri, where he patrolled as a police officer. Also statues of Louis Cyr are located at Place des Hommes-Forts and the Musée de la Civilisation in Quebec City. 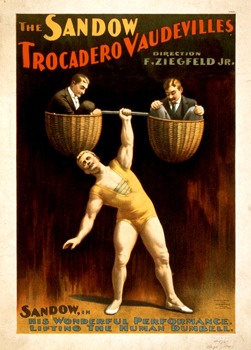 Eugen Sandow is often referred to as the “Father of Modern Bodybuilding” Sandow was born in Prussia (now part of Germany) and began his career as a sideshow strongman. With the help of showman Florenz Ziegfeld, Sandow decided it wasn’t enough to simply demonstrate his strength, with acts similar to the one pictured above but to actually display his muscular physique as though it were a work of art. He soon made his “Muscle Displays” the main feature of his stage show. Sandow performed all over Europe and organized the first ever bodybuilding contest on in 1901. He called it the “Great Competition” and was held in the Royal Albert Hall, London, UK. Sandow judged the contest along with, Sir Charles Lawes, and Sir Arthur Conan Doyle. The contest was a huge success and was a sell-out with hundreds of fans turned away.

Interesting Fact: When Sandow died in 1925 it was reported in the press that he died of a stroke shortly after pushing his car out of the mud. However his actual death was more likely caused by complications from syphilis. He was buried in an unmarked grave in Putney Vale Cemetery at the request of his wife. 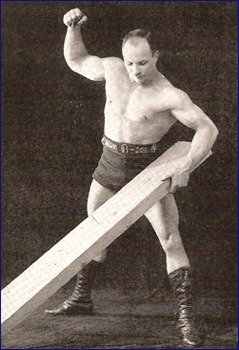 Breitbart was born in Poland into an Orthodox Jewish family of blacksmiths. Facing continuing challenges from other strongmen and relentless anti-Semites, he was determined not to defame his people. This inspired him and made his astonishing acts of strength even more sensational. His feats included, bending iron bars around his arm in floral patterns, biting through iron chains or pulling them apart, and lifting a baby elephant while climbing a ladder. Unfortunately, while on his last tour of Europe, Siegmund was hammering a railroad spike with his bare hands through a 5 inch oak board that was resting on his knee. (like pictured above) The nail pierced his leg and as a result he contracted blood-poisoning. After 10 operations including the amputation of both legs Breitbart died eight weeks later.

Interesting Fact: Before the accident Breitbart planned to appear in Palestine and recreate the famous feats of Samson to gain world-wide attention for all Jews to join him in creating a Jewish homeland. Also, Breitbart’s life was fictionalized in Werner Herzog’s 2001 film Invincible. 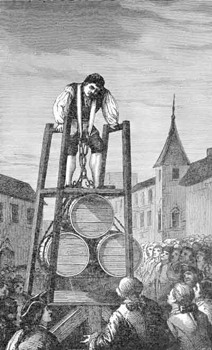 Topham was born in London and was one of the most famous Strongmen of the 18th century possessing all around strength. Topham’s feats included bending thick pokers by striking them against his forearm and being able to lift 224 lbs. overhead easily with just his little fingers. His most famous act of strength occurred on May 28th 1741 when Topham lifted 3 barrels filled with water weighing 1386 lbs.