In just a few days, Christmas will be with us once again. In celebration of this greatest of holidays, we have put together a follow up list to our first “Top 10 Christmas Books“. With this selection, we have tried to pick books that are less familiar to people – in the hopes that we can expand on future Christmas reading for you all. Enjoy the list, and most of all, have a Merry Christmas!

10
The Life and Adventures of Santa Claus
L Frank Baum 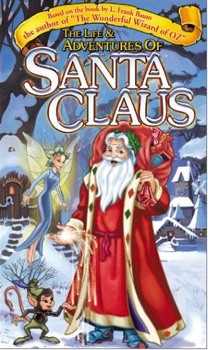 This fantasy (by the creator of the Wizard of Oz) imagines that Santa Claus was once a human foundling adopted by woodland fairies, who grows up surrounded by elves, Knooks, Ryls, and other “immortals” of the natural world. Claus decides that his mission in life should be to bring joy to mortal children by making and distributing toys. His good works spread worldwide, and the mantle of immortality is bestowed upon him. This is a long and old-fashioned tale full of improvised fairy lore, a battle against the evil Awgwas, and unique explanations of such Christmas customs as hanging stockings. 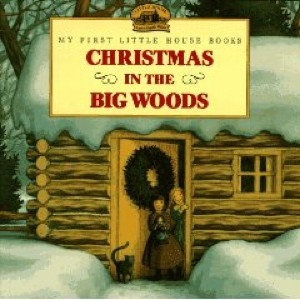 Laura Ingalls Wilder’s Little House books have been cherished by generations of readers. This book is a new presentation of her experience of Christmas: “Long ago, a little girl named Laura Ingalls lived in a little house in the Big Woods of Wisconsin with her Pa, her Ma, her sisters, Mary and Carrie, and their good old bulldog, Jack. Winter was just around the corner, and Laura worked hard to help make the little house ready for the cold days ahead. Soon there was frost on the windows and snow on the ground, but Laura and her folks were warm and cozy in their snug little house in the Big Woods.” 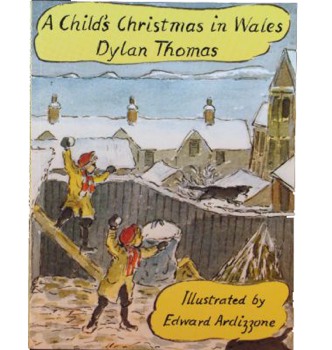 This was a very easy book for me to include because I love the writing of Dylan Thomas immensely. Dylan Thomas, one of the greatest poets and storytellers of the twentieth century, captures a child’s-eye view, and an adult’s fond memories, of a magical time of presents, aunts and uncles, the frozen sea, and in the best of circumstances, newly fallen snow. This book has been in print for over 50 years and it will make a welcome addition to any family’s bookshelf.

7
Yes, Virginia, there is a Santa Claus
Francis Church 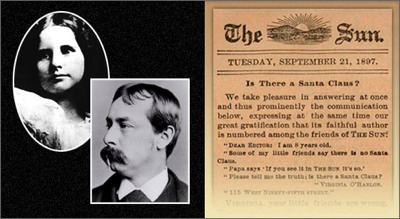 Is There a Santa Claus? was the title of an editorial appearing in the September 20, 1897 edition of the New York Sun. The editorial, which included the famous reply “Yes, Virginia, there is a Santa Claus”, has become an indelible part of popular Christmas lore in the United States. In 1897, Dr. Philip O’Hanlon, a coroner’s assistant on Manhattan’s Upper West Side, was asked by his then eight-year-old daughter, Virginia (1889-1971), whether Santa Claus really existed. Virginia had begun to doubt there was a Santa Claus, because her friends had told her that he did not exist. Dr. O’Hanlon suggested she write to the New York Sun, a prominent New York City newspaper at the time, assuring her that “If you see it in The Sun, it’s so.” The letter was replied to by Francis Church – an editor. Its message was very moving to many people who read it. More than a century later it remains the most reprinted editorial ever to run in any newspaper in the English language.

6
The Gift of the Magi
O Henry 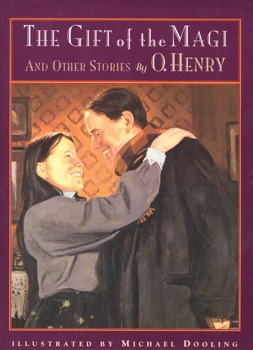 Jim Dillingham Young and his wife Della are a young couple who are very much in love with each other, but can barely afford their one-room apartment due to their very bad economic situation. For Christmas, Della decides to buy Jim a chain which costs twenty dollars for his prized pocket watch given to him by his father. To raise the funds, she has her long hair cut off and sold to make a wig. Meanwhile, Jim decides to sell his watch to buy Della a beautiful set of combs made out of tortoise shell for her lovely, knee-length brown hair. Although each is disappointed to find the gift they chose rendered useless, each is pleased with the gift they received, because it represents their love for one another. This is a heartwarming tale that has been retold countless times in TV and film. 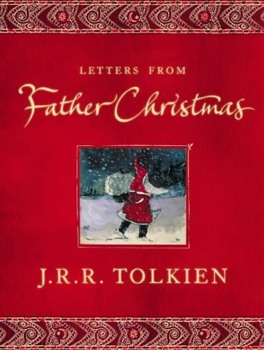 The Father Christmas Letters is a collection of letters written and illustrated by J. R. R. Tolkien between 1920 and 1942 for his children, from “Father Christmas”. They tell of the adventures and misadventures of Father Christmas and his helpers, including the North Polar Bear and his two sidekick cubs, Paksu and Valkotukka. This is a particularly good book for those who love Tolkien – and it is a chance to see his writing focusing on something other than middle earth and fantasy. 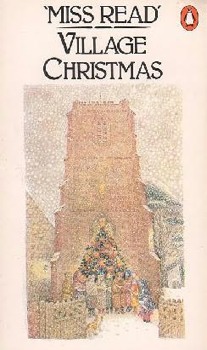 In Village Christmas, a family new to Fairacre is viewed with suspicion by their elderly neighbors, the Waters sisters, until an unexpected turn of events works magic over both houses on Christmas Day. Meanwhile, Mrs. Berry, in the nearby village of Caxley, faces an equally eventful Christmas Eve in The Christmas Mouse when she is awakened by two unexpected intruders: a mouse and a bedraggled runaway boy, both taking refuge from a winter storm. Both stories are resolved in Miss Read’s comforting style, as warm as the glowing coals of the cottage fire and the spirit of Christmas itself. Miss Read is the pseudonym of Mrs. Dora Saint, a former schoolteacher beloved for her novels of English rural life, especially those set in the fictional villages of Thrush Green and Fairacre.

3
The Tailor of Gloucester
Beatrix Potter 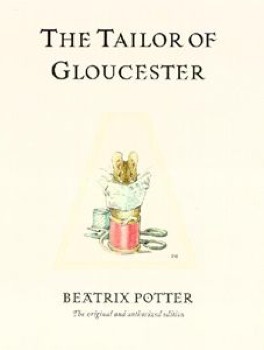 The Tailor of Gloucester is a children’s novel by Beatrix Potter that was first published in October 1903. It is traditionally read to children on Christmas eve, just before bed time. The story tells of a tailor who falls ill and is unable to complete an important Christmas commission. When he returns to his shop, however, it is to find the waistcoat completed, apart from a button-hole because there is “no more twist”. The work has been done by mice who are grateful because the tailor rescued them from his cat. 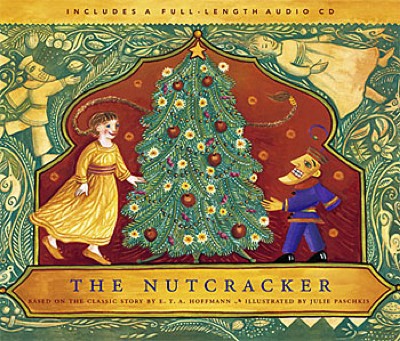 The Nutcracker and the Mouse King is a story written in 1816 by E. T. A. Hoffmann in which young Marie Stahlbaum’s favorite Christmas toy, the Nutcracker, comes alive and whisks her away to a magical kingdom populated by dolls after defeating the seven-headed Mouse King. In 1892, the Russian composer Pyotr Ilyich Tchaikovsky and choreographers Marius Petipa and Lev Ivanov turned the story into the ballet The Nutcracker, which became one of Tchaikovsky’s most famous compositions, and one of the most popular ballets in the world. 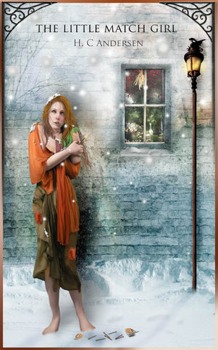 While this beautiful and sad story is actually set on New Year’s Eve, the little girl in the tale experiences aspects of Christmas by looking through a window at a Christmas tree and a holiday feast. In the story, the little girl is afraid to go home because she has not sold enough matches. In the freezing snow she uses the matches to keep herself warm. She sees a shooting star which reminds her of her grandmother who told her that a shooting star means someone has died. The little girl freezes to death but is found with a smile on her face as she died thinking of her loving grandmother – the only person who was kind to her in life. 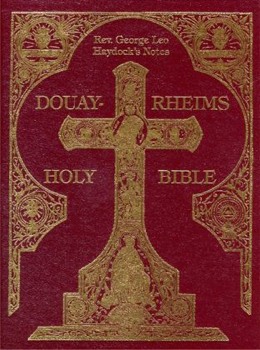 It is only fair that the Bible be included in this list. The Bible describes the birth of Jesus in Bethlehem (Matthew 1:18 – Matthew 2:12, and Luke 1:26 – Luke 2:40) which is the whole reason for the Christmas season. The Bible does not give the specific date of the birth of Jesus, and the early Church celebrated His birth in March or May (depending on the region). The earliest known reference to Christmas being celebrated on the 25th of December was in the Calendar of 354 (AD) which was compiled for a Roman named Valentius. This would indicate that it was the Roman tradition to celebrate on that day. As Rome was already well established as the center of Christianity, it makes sense that the Roman date was eventually adopted by the rest of the world. The Calendar is of extremely important historical interest as it also records the dates of the celebration of Easter, commemoration dates of 100 years worth of previous Popes, and other commemoration dates of early martyrs. Interestingly, it refers to the pagan Sol Invictus (Birth of the Sun) holiday as independent of Christmas (though they fell on the same date) – contrary to the modern misconception that Christmas was simply stolen from the Pagan Roman festival.

This article is licensed under the GFDL because it contains quotations from Wikipedia. Some synopses are courtesy of Amazon.