From time to time we need to shed a few pounds and for most people the solution is to reduce calorie intake – eat less than you burn and you are guaranteed to lose weight. This is the principle behind the reason that the majority of French people are slim: they eat butter, cream, chocolate, and other delicious things, but in small quantities. Unfortunately there is a lot of money to be made in diets and so we are surrounded by bizarre ideas for weight loss. This list looks at ten of the strangest diets around. We have only included diets which are widely-spread; this means that individuals with bizarre eating habits are not included (they will have their own list). 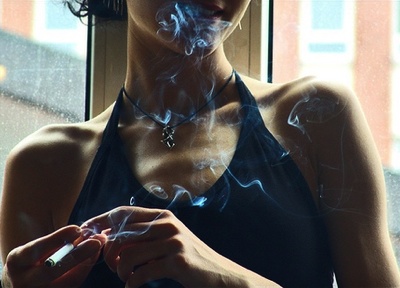 The macrobiotic diet is actually quite ancient. It involves eating grains as a staple food supplemented with other foodstuffs such as vegetables and beans, and avoiding the use of highly processed or refined foods. This is probably the least bizarre diet on the list, but it does have one noticeable quirk: some leaders in the field of macrobiotics advocate smoking for good health, claiming that it is the non-macrobiotic foods that cause cancer, not smoking. Michio Kushi, who introduced macrobiotics to the US, had surgery on his colon in 2004. His son said: “[I]n spite of years of his smoking, a fact well-known to many, recent x-rays of Michio’s lungs were surprisingly clean, like that of a twenty year old (remarked his physician)”. 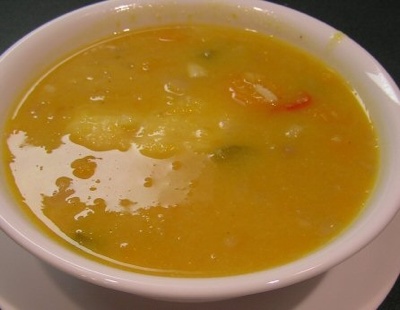 The Cabbage soup diet is a radical weight loss diet designed around heavy consumption of a low-calorie cabbage soup over the time of seven days. The diet is actually surprisingly popular and has spawned a whole slew of similar fads. The origins of the diet are unknown but it gained popularity as a word of “faxlore” in the 1980s, because it spread virally through people sharing it via fax machines. The diet is almost universally condemned by doctors as it lacks any substantial nutrition and the weight loss it causes is mostly water-loss not fat-loss, and is, therefore, not permanent. Along with the cabbage soup recipe, the diet is usually touted as being used in hospitals to dramatically reduce weight in patients needing heart surgery; this is not true. Most people trying this diet lose energy and experience light-headedness. The most common side effect is flatulence – a lot of it. 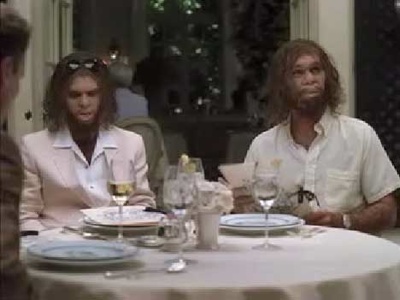 This diet harkens back to the cavemen and their eating habits. It is based on the presumed ancient diet of wild plants and animals that various human species habitually consumed during the Paleolithic—a period of about 2.5 million years duration that ended around 10,000 years ago with the development of agriculture. Proponents of the diet say that paleolithic men were free of diseases known in modern times and, therefore, following their diet should keep us free from sickness. Centered around commonly available modern foods, the “contemporary” Paleolithic diet consists mainly of lean meat, fish, vegetables, fruit, roots, and nuts; and excludes grains, legumes, dairy products, salt, refined sugar, and processed oils. So now, from a diet based on evolution, to a diet based on creationism: 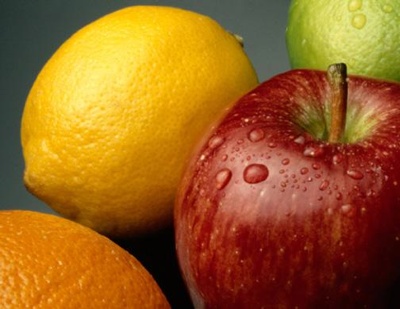 Fruitarianism is a diet of nothing but fruit, though some people whose diet is not 100% fruit, consider themselves fruitarian, if their diet is 75% or more fruit. Some fruitarians believe fruitarianism was the original diet of mankind in the form of Adam and Eve based on Genesis 1:29: “And God said: Behold I have given you every herb bearing seed upon the earth, and all trees that have in themselves seed of their own kind, to be your meat”. They believe that a return to an Eden-like paradise will require simple living and a holistic approach to health and diet. A fruitarian diet can cause deficiencies in calcium, protein, iron, zinc, vitamin D, most B vitamins (especially B-12), and essential fatty acids. Additionally, the Health Promotion Program at Columbia reports that food restrictions in general may lead to hunger, cravings, food obsessions, social disruptions and social isolation. Gandhi followed a fruit-only diet from time to time, but eventually gave it up due it being unsustainable. Now, if you didn’t think that was weird enough, how about the Bible Diet? The Bible Diet (or Maker’s Diet) is based on the idea that certain foods are either forbidden (“unclean”) or acceptable (“clean”) to God. The main promoter of the Bible diet is Jordan S. Rubin, who claims that the diet was responsible for his recovery from Crohn’s disease at the age of 19. In 2004 the United States Food and Drug Administration ordered Rubin’s company, Garden of Life, Inc., to stop making unsubstantiated claims about eight of its products and supplements. The diet begins and ends each day with prayers of thanksgiving, healing, and petition. The individual should perform exercises of “Life Purpose” for two to five minutes before the day gets too stressful. To achieve the utmost spiritual benefits from the partial fast days, it is suggested to pray each time hunger is experienced. The diet is broken up into three phases. Phase One restricts meats such as pork, bacon, ostrich, ham, sausages, emu and imitation meat. Fish and sea foods such as fried fish, breaded fish, eel, shark, crab, clams, oyster, mussels, lobster, shrimp, scallops, and craw fish are prohibited. 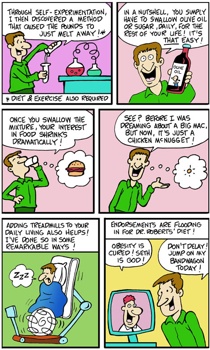 For people who love to eat, the Shangri-La diet is a godsend. Basically, you can eat what you like. The principle behind this diet is that the body has a set point (the weight that it wants to sustain) and appetite is moderated by the body to ensure that you stay at your set point. The inventor of the diet, Seth Roberts, says that you can lower your set point using his method, thereby lowering appetite and eventually weight. The method? Every day you must drink 100-400 calories of extra light olive oil or sugar water in a two hour window in which you must experience no flavors (including cigarette smoke). It is the consumption of extra flavorless calories which supposedly lowers the set point. While there are some critics of the method (which earned Roberts a spot on the New York Times bestseller list), most doctors consider that the diet, while lacking scientific evidence, is benign. [Image copyright (c) Erik Sansom: source] 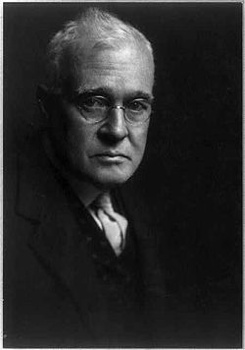 “Nature will castigate those who don’t masticate.” These are the words used by Horace Fletcher at the turn of the 20th century to market his new diet: Fletcherizing. In this diet, a person must chew each mouthful 32 times whilst keeping their head tilted forward. After the chewing is complete, the dieter tilts their head back, allowing the contents of their mouth to slide down the throat. Any food that did not naturally slip down, was to be spat out. In addition, Fletcher advocated chewing liquids, and said that one must not eat when angry or sad. Fletched died a millionaire at 69 – with the majority of his money having come from promoting his diet which was wildly popular. 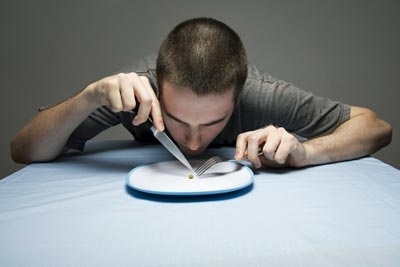 Breatharianism consists of eating: nothing. That’s right, it is called Breatharianism because you are surviving on nothing but your breath. There are some elements of esotericism in this diet and some of practitioners believe that they are sustained by energy from the sun or a “vital life force” called prana. The Breatharian Institute of America promote the diet and offer a workshop to help you get started for the low price of just $10,000, which, according to their website: “is not a misprint”. These courses are run by Wiley Brooks who previously charged up to 25 million dollars for his courses. Occasionally Wiley eats a cheeseburger and a diet coke claiming that when he’s surrounded by junk culture and junk food, consuming them adds balance. At least three people have died whilst on this “diet”. If you have tried this diet and are not dead yet, be sure to tell us about it in the comments. 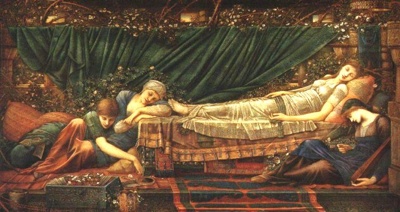 As its name implies, this diet involves sleep – a lot of it. The principle behind this diet is: “if you aren’t awake, you aren’t eating”. Consequently, advocates take heavy sedation and sleep for days at a time in order to lose weight. Obviously the diet works but it is such an unhealthy approach to weight loss that it is insane to try it. The diet was originally formulated in the 1970s and was reportedly popular with Elvis Presley who was beginning to have difficulty bending down to tie up his blue suede shoes. 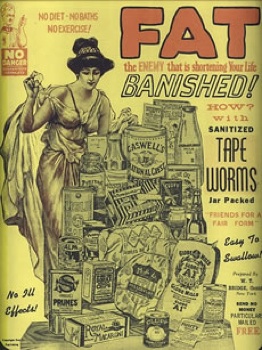 This diet is as disgusting as its name. In this diet, you eat a tapeworm in a cyst and let it grow in your body until it is fully mature. You then worm yourself and poop out the worm. Advocates of this insane diet assure people that they can lose 1 – 2 pounds per week using their method. Because it is illegal to import tapeworms into the US, some organizations run tapeworm farms in Africa and Mexico which tourists can visit to get infected “safely”. On these farms, cows are intentionally infected with tapeworm for harvesting for human consumption. This diet is alleged to work because once ingested, the worm attaches in the intestinal tract and absorbs nutrients from the food you eat. This is not so much a diet as a fast, so it is added as a bonus item. Under this program, developed by Dr. Robert Linn in the 1970s, people ate nothing at all. But several times a day the fast was broken by a small drink of the concoction that Linn had invented called Prolinn. It was a liquid protein that provided fewer than 400 calories a day, consisted of ground-up and crushed animal horns, hooves, hides, tendons, bones and other slaughterhouse byproducts that were treated with artificial flavors, colors and enzymes to break them down. [Source: CBC News]