There is always someone looking for the easy way of obtaining more pleasure, wealth or power. I always find it fascinating the lengths some will try just to achieve what they desire most. This list looks at 10 who are believed to have turned to the ultimate evil to obtain their desire. 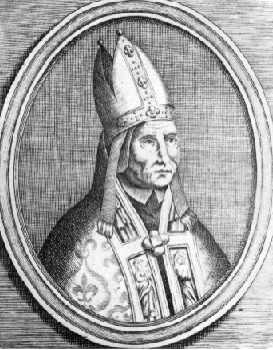 Pope Sylvester II was one of the most learned men of his time. Well versed in mathematics, astronomy, and mechanics; he is credited with inventing the hydraulic organ, pendulum clock, and introducing Arabic numerals to Western Europe. He also wrote books on mathematics, natural science, music, theology and philosophy. Pope Sylvester II was the first French Pope and certainly the most significant in the 10th century. Upon his death, rumors began to fly that his great intelligence – and, consequently his inventive genius – was the result of a pact with the devil. This was most likely due to his regular contact with great scientific minds in the Arab world and his brave attempts to root out simony in the Church. 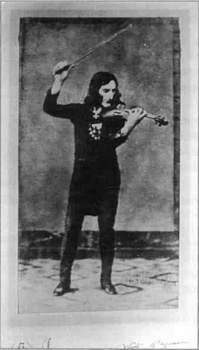 Nicolo Paganini is one of the greatest violin virtuosos to have ever lived. He learned to play the mandolin at 5 and was composing by 7. He started playing publicly at 12 but by 16 he had a breakdown and disappeared into alcoholism. He sobered up and by 22 was the first music superstar. Paganini was capable of playing three octaves across four strings in a hand span, a feat that is nearly impossible even by today’s standards. He composed 24 Caprices at 23 and for years no other violinist was capable of playing much of his music. His playing of tender passages is said to have brought audiences to tears. One of his famous pieces was called Le Streghe which translates to Witches’ Dance. Audiences believed Paganini made a pact with the devil to perform supernatural displays of technique. Some patrons even claimed to see the devil helping him during his performances. It is because he was denied the Last Rites in the Church and his widely rumored association with the devil, that his body was denied a Catholic burial in Genoa. It took four years, and an appeal to the Pope, before the body was allowed to be transported to Genoa, but was still not buried. His remains were finally put to rest in 1876 in a cemetery in Parma. 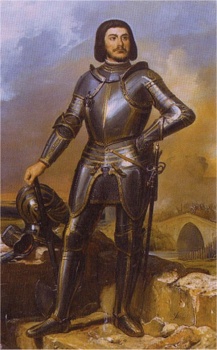 Gilles de Rais was considered intelligent, courageous and very attractive with a bluish black beard. Born to one of the most distinguished families in Brittany, he came into his own when his father died in Gilles’ 20th year. He found himself with untold wealth and power which eventually led to his downfall. Gilles got an attack of “keeping up with the Joneses” which ultimately led to the loss of much of his wealth. In desperation he began to experiment with the occult under the direction of a man named Francesco Prelati, who promised that Gilles could help him regain his squandered fortune by sacrificing children to a demon called “Baron.” Over the course of his killing spree, Gilles raped, tortured, and murdered between 80 and 200 children. He was tried, found guilty, and executed by hanging and burning. 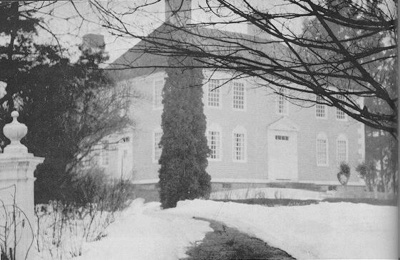 Jonathan Moulton started as an apprentice to a cabinet maker but in 1745 he left and started his career in the New England Army. He fought in the King George War and the French and Indian War. He married in 1749 and sired 11 children. He became one of the wealthiest men in New Hampshire and this led to later tales of his deal with the devil. In 1769 the mansion he built in a poor Puritan town burned to the ground. Popular belief at the time was that Moulton had a pact with the devil wherein he would fill Moulton’s boots to the brim with gold once a month in return for his soul. It was said that Moulton thought up a clever ploy and placed his boots – with the soles cut off – over a large hole in the ground. The devil, wondering why it was taking so much gold to fill the boots discovered the trick and exacted revenge. It is believed that when Moulton died his body disappeared out of the coffin and was replaced by a box of coins stamped with an image of the devil. Moulton’s coffin was buried with no grave marker and its location is unknown. 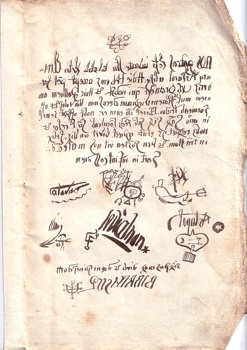 Father Urbain Granadier was a French Catholic priest who was burned at the stake after being convicted of witchcraft. He served as priest in the church of Sainte Croix in Loudun, in the Roman Catholic Diocese of Poitiers. Ignoring his vow of priestly celibacy, he is known to have had sexual relationships with a number of women and to have acquired a reputation as a philanderer. In 1632, a group of nuns from the local Ursuline convent accused him of having bewitched them, sending the demon Asmodai, among others, to commit evil and impudent acts with them. At his trial, the judges, after torturing the priest, introduced documents purportedly signed by Grandier and several demons as evidence that he had made a diabolical pact. They were written backwards in Latin and even included the signature of Satan himself. The text of the pact read as follows (the original can be seen above – click for a larger view):

We, the influential Lucifer, the young Satan, Beelzebub, Leviathan, Elimi,
and Astaroth, together with others, have today accepted the covenant pact
of Urbain Grandier, who is ours. And him do we promise
the love of women, the flower of virgins, the respect of monarchs, honors, lusts and powers.
He will go whoring three days long; the carousal will be dear to him. He offers us once
in the year a seal of blood, under the feet he will trample the holy things of the church and
he will ask us many questions; with this pact he will live twenty years happy
on the earth of men, and will later join us to sin against God.
Bound in hell, in the council of demons.
Lucifer Beelzebub Satan
Astaroth Leviathan Elimi
The seals placed the Devil, the master, and the demons, princes of the lord.
Baalberith, writer.

Tartini was an Italian composer and violinist. He was one of the most instrumental musical composers having written over 400 works. Unlike most of his contemporaries he wrote no church music or operas, he focused most of his work on violin concerti and sonatas. His most infamous piece is called the Devil’s Trill Sonata. The story behind “Devil’s Trill” starts with a dream. Tartini allegedly told the French astronomer Jérôme Lalande that he dreamed that The Devil appeared to him and asked to be his servant. At the end of their lessons Tartini handed the devil his violin to test his skill—the devil immediately began to play with such virtuosity that Tartini felt his breath taken away. When the composer awoke he immediately jotted down the sonata, desperately trying to recapture what he had heard in the dream. Despite the sonata being successful with his audiences, Tartini lamented that the piece was still far from what he had heard in his dream. What he had written was, in his own words: “so inferior to what I had heard, that if I could have subsisted on other means, I would have broken my violin and abandoned music forever.” You can listen to part IV of the piece above – the most difficult section, played by Itzhak Perlman. If you prefer a more techno version of the piece, you can hear Vanessa Mae playing it here. 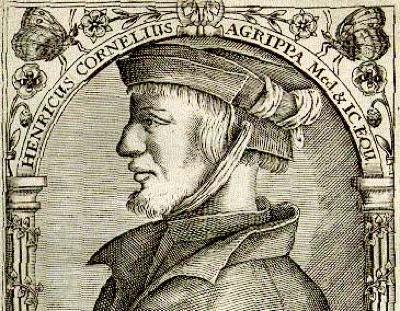 Cornelius Agrippa was the most influential writer of renaissance esoterica. He studied law and medicine but never obtained a degree. He was considered a magician, occult writer, theologian, astrologer and alchemist. He was a leader in feminist rights and often defended women accused of witchcraft. He wrote 3 books on the occult that are still in use today. In 1535 he was labeled a heretic and sentenced to death. He escaped and on his way home fell ill and died. After Agrippa’s death, rumors circulated about his having summoned demons. In the most famous of these, Agrippa, upon his deathbed, released a black dog which had been his familiar. This black dog resurfaced in various legends about Faustus, and in Goethe’s version became the “schwarze Pudel” Mephistopheles. 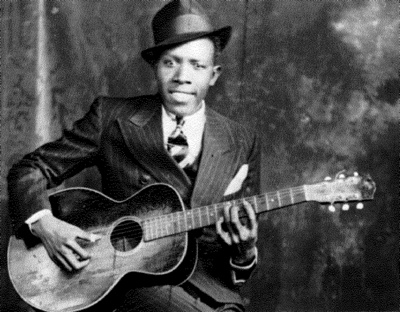 Robert Johnson was a great American Blues musician. Ranked 5th out of 100 on Rolling Stones list as the greatest guitarists of all time. The legend goes that he wanted to be great at guitar and was instructed to head to a crossroads. There he met the devil who tuned his guitar, giving him mastery over the instrument. Johnson did little to dispel the rumors, even encouraging them by alluding to the fact that he had, indeed, made a deal with the prince of darkness. He produced 6 records before his death at age 27. Johnson’s death is controversial as the most common claim is he was caught flirting with a married women and she offered him some whiskey which was believed to be poisoned by her husband. He was buried in an unmarked grave, the location of which is still under debate. 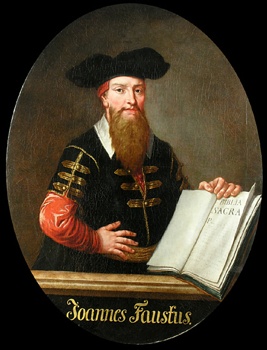 Dr. Johann Georg Faust was an itinerant alchemist, astrologer and magician of the German Renaissance. His life became the nucleus of the popular tale of Doctor Faust from ca. the 1580s, notably culminating in Marlowe’s The Tragical History of Doctor Faustus (1604) and Goethe’s Faust (1808). Legend has it that Faust wanted a life of pleasure and having been involved with the occult learned how to summon the devil. Having done so he made a deal with him for his soul in return for 24 years of service from Satan. Unfortunately, after 16 years he regretted his deal and wanted to withdraw it. The consequences of this attempt to withdraw the deal are well known to any who have read the various fictional tales of Faust’s life: the devil brutally murdered him. 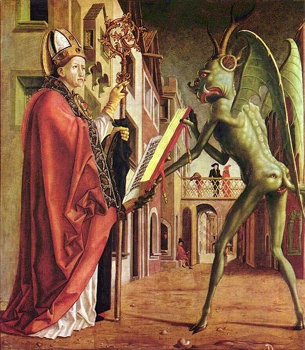 Saint Theophilus the Penitent, or Theophilus of Adana (died ca. 538), was a cleric in the sixth century Church who is said to have made a deal with the devil to gain an ecclesiastical position. His story is significant as it is the oldest story of a pact with the Devil. Theophilus was the archdeacon of Adana, Cilicia, which is part of modern Turkey. He was unanimously elected to be a bishop, but turned the position down out of humility. Another man was elected in his stead. When the new bishop unjustly deprived Theophilus of his position as archdeacon, Theophilus regretted his humility and sought out a wizard to help him contact Satan. In exchange for his aid, Satan demanded that Theophilus renounce Christ and the Virgin Mary in a contract signed with his own blood. Theophilus complied, and the devil gave him the position as bishop.

Years later, fearful for his soul, Theophilus repented and prayed to the Virgin for forgiveness. After forty days of fasting, the Virgin appeared to him and verbally chastised him. Theophilus begged forgiveness and Mary promised to intercede with God. He then fasted a further thirty days, at which time Mary appeared to him again, and granted him Absolution. However, Satan was unwilling to relinquish his hold over Theophilus, and it was a further three days before Theophilus awoke to find the damning contract on his chest. He then took the contract to the legitimate bishop and confessed all that he had done. The bishop burned the document, and Theophilus expired, out of sheer joy to be free from the burden of his contract. [Source]