Some of the largest creatures this world has ever seen lived millions of years ago. Here are ten of the largest, most fearsome sea monsters ever to prowl the oceans: 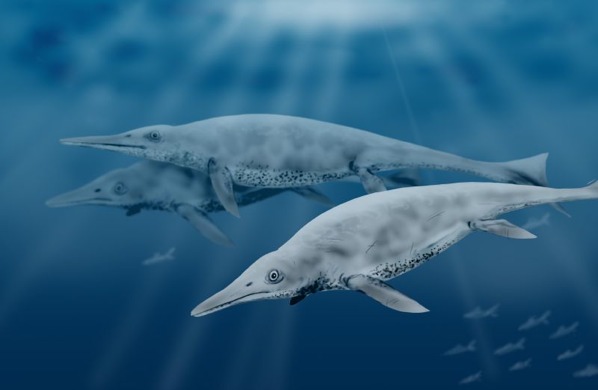 The ichthyosaurs were marine predators that looked like modern dolphins and could reach a massive size during the Triassic period over 200 million years ago.

Shastasaurus, the largest marine reptile species ever found, was a variety of ichthyosaur that could grow to over 65 feet (20m), much longer than most other predators. But one of the largest creatures to ever swim the sea wasn’t exactly a fearsome predator; Shastasaurus was a specialized suction feeder, eating mainly fish. 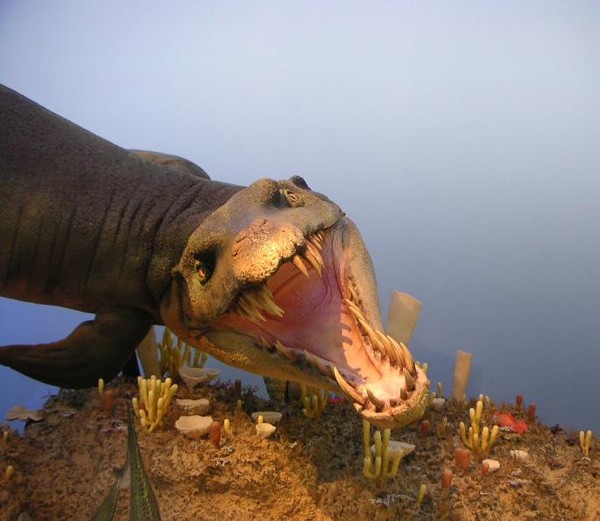 Dakosaurus was first discovered in Germany and, with its odd reptilian-yet-fishy body, was one of the top predators in the sea during the Jurassic period.

Fossil remains have been found across a very widespread distribution, turning up everywhere from England to Russia to Argentina. Though it is commonly compared to modern crocs, Dakosaurus could reach a length of 16 feet (5m). Its unique teeth have led scientists to consider it an apex predator during its reign of terror. 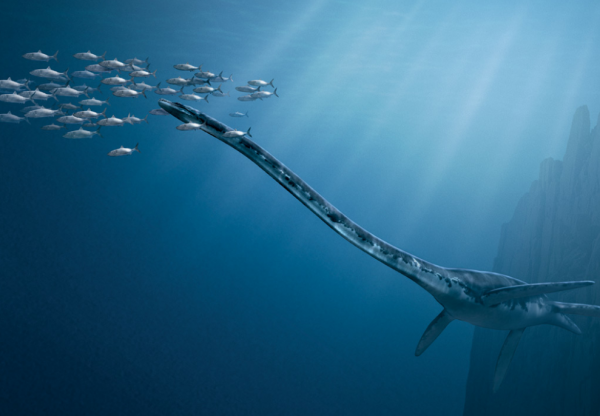 Thalassomedon was a species of Pliosaur whose name translates from Greek to “sea lord” – and for a good reason. They were massive predators, reaching lengths of up to 40 feet (12m).

Its flippers were nearly 7 feet (2m) long, allowing it to swim the depths with deadly efficiency. Its reign as a top predator lasted through the late Cretaceous period, finally coming to an end when the sea saw new and larger predators like the Mosasaur. 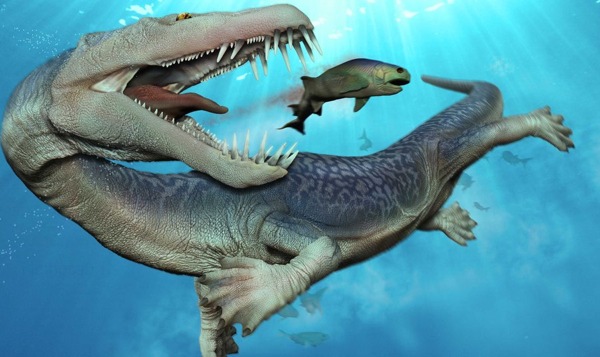 Nothosaurus, only about 13 feet (4m) long, were aggressive hunters. They were armed with a mouth full of sharp, outward-pointing teeth, suggesting a diet of squid and fish. Nothosaurus is thought to have mainly been an ambush predator, using its sleek reptilian figure to sneak up on prey and take it by surprise.

It’s believed that Nothosaurs were related to pliosaurs, another variety of deep sea predators. Fossil evidence suggests that they lived during the Triassic period over 200 million years ago. 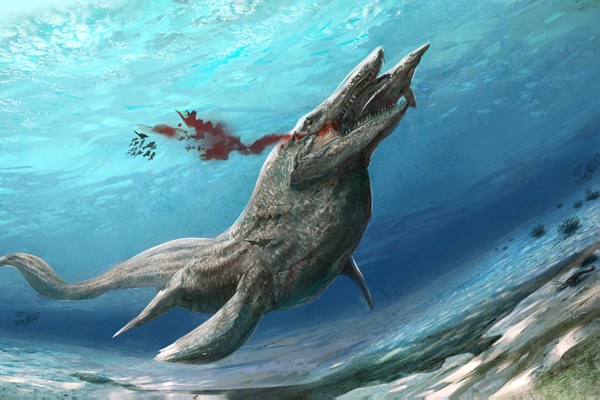 Tylosaurus was a species of Mosasaur. It was enormous, reaching more than 50 feet (15m) in length.

The tylosaurus was a meat-eater with a very diverse diet. Stomach remains show signs of fish, sharks, smaller mosasaurs, plesiosaurs, and even some flightless birds. They lived during the Late Cretaceous in the seas that covered North America, where they sat firmly atop the marine food chain for several million years. 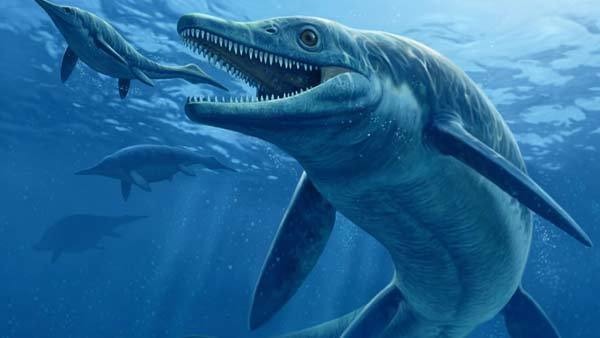 Only recently discovered, T. saurophagis was the size of a school bus, reaching nearly 30 feet (9m) long. It is an early species of ichthyosaur that lived during the Triassic period, 244 million years ago. Because they were alive shortly after the Permian extinction (Earth’s largest mass extinction, when 95% of marine life is thought to have been wiped out), its discovery is giving scientists new insights into the quick recovery of the ecosystem. 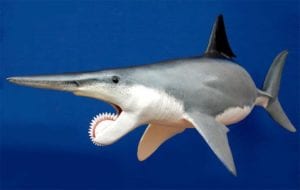 Who wouldn’t fear the nightmarish jaw of Helicoprion, a large, 270 million-year-old cartilaginous fish with an elaborate whorl of teeth set in the middle of its mouth? Sharing a common ancestor with sharks, this sea monster was first discovered in 1899, although scientists were unsure of how or why their jaws were shaped as they were.

Recent studies revealed that Helicoprion had a partly concealed tooth factory that began near the area where the upper and lower jaws meet, ran over the mouth where the tongue would be if it had one, and then into the cartilage supported by the lower jaw. Teeth recovered have helped determine that size of these creatures reached at least 25 feet (about 8m) in length. 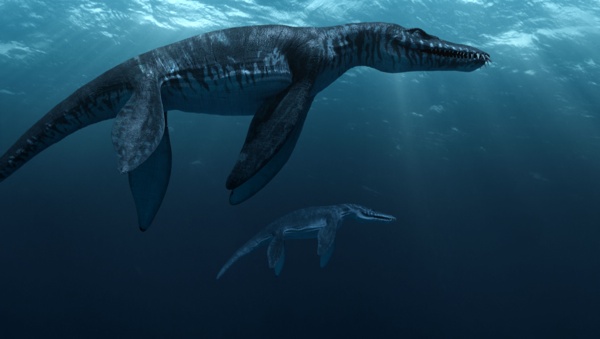 Liopleurodon was a marine reptile measuring in at more than 20 (6m) feet in length. It mostly lived in the seas that covered Europe during the Jurassic period, and it was one of the top predators around. Its jaws alone are believed to have been over 10 feet long—roughly the distance from the floor to the ceiling.

With teeth that big, it’s easy to see why Liopleurodon dominated the food chain. 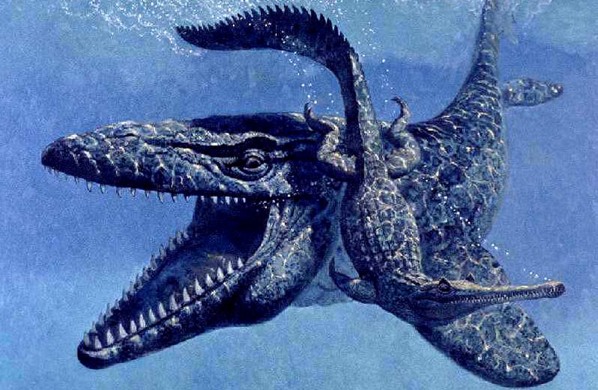 If the Liopleurodon was huge, than Mosasaurus was colossal.

Fossil evidence suggests that Mosasaurus could reach as much as 50 feet (15m) in length, making it one of the largest marine predators of the Cretaceous period. Mosasaurus’s head was like that of a crocodile, lined with hundreds of razor-sharp teeth which could kill even the most well-armored enemies. 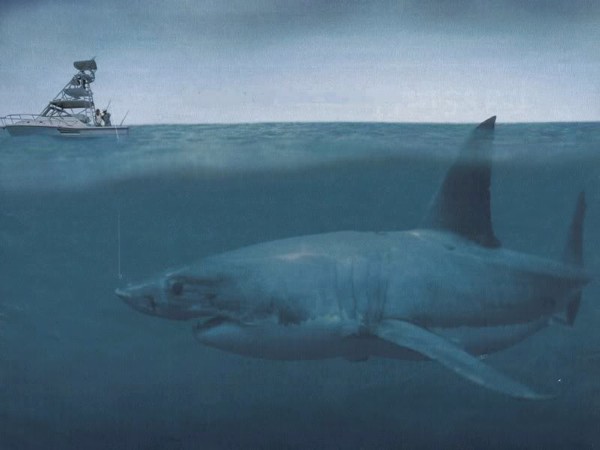 Megalodons prowled the depths during the Cenozoic Era, 28 – 1.5 million years ago, and were a much bigger version of the great white shark, an apex predator of today’s oceans. But while our great whites only reach a maximum length of 20 feet (6m), Megalodons could grow to 65 feet in length (20m)—longer than a school bus!