Remember when you were a kid and you loved running all over playgrounds and jumping down the slide? Those were the days . . .

Monkey bars, a 3-meter (10 ft) slide, and one of those wobbly rope bridges usually wore you out and made your parents happy, knowing you would pass out on the ride home. But since then, playgrounds have only gotten bigger and better than ever. Here are 10 of the most mind-blowingly awesome playgrounds found across the globe. 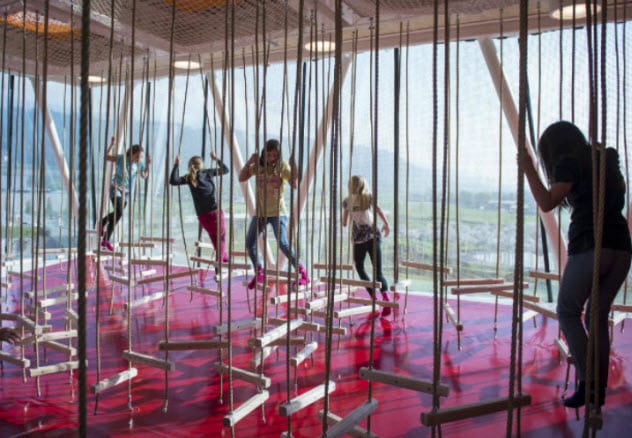 When most people think of Swarovski, the last thing that comes to mind is a playground. But the Austrian-based crystal company has one of the most impressive in the world.

Crystal Worlds is a museum the company built in 1995 to commemorate their 100th anniversary. While it houses some beautiful crystalline works of art, it also has a rather impressive playground to keep the kids occupied while mom and dad look at the shiny stuff.

Called the play tower, the playground is a four-story vertical building encased in glass. It’s aptly named and offers a variety of fun and challenging obstacles for children of all ages.[1]

Kids—and adults if they are so inclined—can bounce on trampolines overlooking a beautiful view of the Alps or go exploring in the area filled with crystalline chambers, giant swings, and nets. The kids will surely wear themselves out long enough for you to buy that crystal horse figurine you have had your eye on. So check it out the next time you are in Austria! 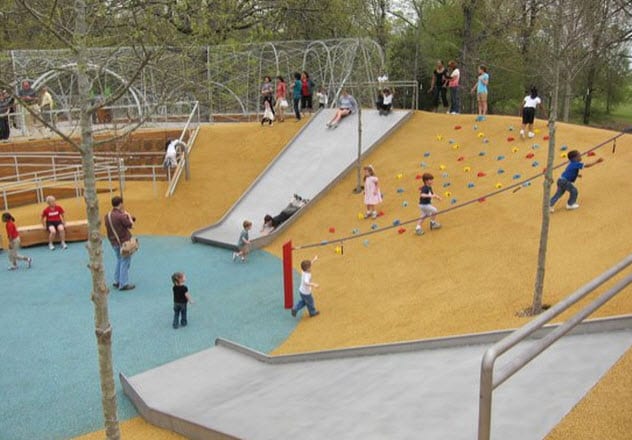 The Woodland Discovery Playground at Shelby Farms Park in Memphis is one of the largest on this list. Children are encouraged to run about and explore until they find whatever interests them to swing from, crawl through, or climb upon in this park in the woods of Tennessee.

The Shelby Farms Park sits on a 4,500-acre plot of land and has a lot of fun attractions for the entire family. But anyone who sees the four-acre playground might just have to pick up their jaw from the floor.[2]

The focus of the playground is to immerse children in nature, so it expands along a four-acre path through the woods to achieve this goal. While it has the usual slides, obstacles, and nets, the playground also features some amazing tree houses.

It’s not uncommon to find adults playing with their children all over the place. We all know that given the opportunity, each and every one of us wants to climb up and be king (or queen) of the tower. 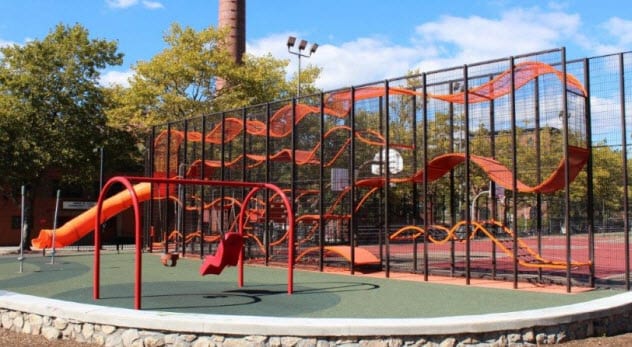 The Wallholla playground in the Netherlands is a unique experience as it was designed to use a very small space. Unlike the Woodland Discovery Playground, they didn’t have four acres to play with.

What do you do when you have little room but a lot of great ideas? Build up, of course! The play area is encased in a metal screen that hosts ropes, climbing rocks, slides, and platforms for children to climb on.[3]

Sitting just next to the structure is a smaller, more traditional play area consisting of a couple of swings and a slide. But the real action is inside the cage. The design for the park, built in 2005, has become a popular model for urban playgrounds all over the world.

In the United States and Canada, three different versions of varying sizes have been constructed, making the Wallholla design one of the most profitable playgrounds in the world. The playground is sold to urban areas as space for playgrounds and parks is being taken up all over the world.

Expect to see the Wallholla design in your city soon if you don’t already have one! 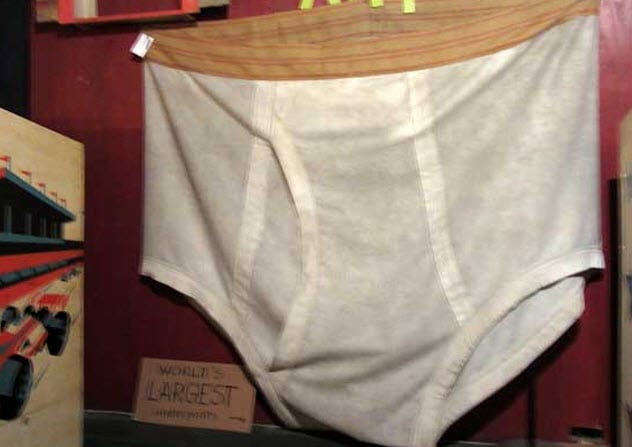 The City Museum in Saint Louis may technically be a museum, but it’s really a giant playground for kids and adults. The 56,000-square-meter (600,000 ft2) building used to belong to the International Shoe Company, but it was bought and converted in 1995 by Bob Cassilly, a man who was famous for creating tourist attractions.

The museum features a huge collection of . . . well, anything and everything! They take whatever they can get and turn it into art or something to be played on, which not only entertains but also informs and educates the children.

Within and around the building, there is a 10-story slide, a couple of planes, a 9-meter-high (30 ft) Ferris wheel, a school bus, the world’s largest pencil at 23 meters (76 ft) long, the largest pair of underpants, and a pipe organ. There are also the traditional nets and obstacles to keep kids busy throughout the building.

People get lost in the giant ball pit or wear themselves out climbing from the ground up to a plane.[4] This is definitely a stop anyone visiting the city should make, whether they have kids or not. 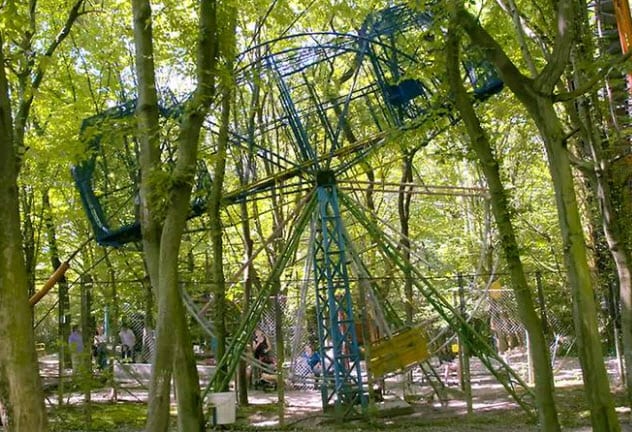 You know that project you never seem to finish in your backyard? We all have them. But for Italian restaurateur Bruno Ferrin, his was a gigantic playground and he finished it . . . it just took him 40 years!

Ferrin began the project to try to draw customers into his family restaurant. The idea was to build rides and incorporate the playground into the natural environment, which not only makes for a fun experience but an ecological one as well. He ended up disturbing very little of the natural growth in the area, which makes the park a rather lovely place with a lot of shade trees.

Throughout the park, Ferrin built more than 50 rides. This would be impressive for a trained professional, but Ferrin is completely self-taught when it comes to welding and park design.

The park has become a tourist destination in Battaglia, and it isn’t rare at all to find adults sliding down the slides or climbing all over the obstacles with or without their kids. As far as bringing people to his restaurant, Ferrin succeeded. [5] 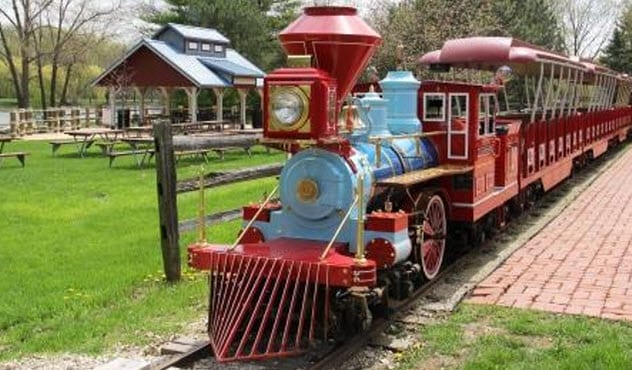 Blackberry Farm Adventure Playground took the concept of a playground and a working farm and then mashed them together into a giant place for kids to play and learn. Not only does this playground feature a train, hay wagon, pedal tractors, paddle boats, a carousel, and ponies, it simulates a large, working farm so children can learn where their food comes from.

Before you ask, no, they don’t simulate a kill house, which would have been fun for parents wanting to scare their children into becoming vegetarians. But it does have something called the Little Farmer’s Junction to help teach kids about farming in a fun way. [6]

For the tots who enjoy the simple life, they can hop onto a tractor-drawn wagon ride and head around the lake to the Pioneer Cabin. There, they can play in a simpler time before cell phones and Twitter. The park is a huge attraction for the little ones from across Illinois and a must-see for anyone who wants to take a rambunctious child and turn him into a sleepy angel by the end of the day. 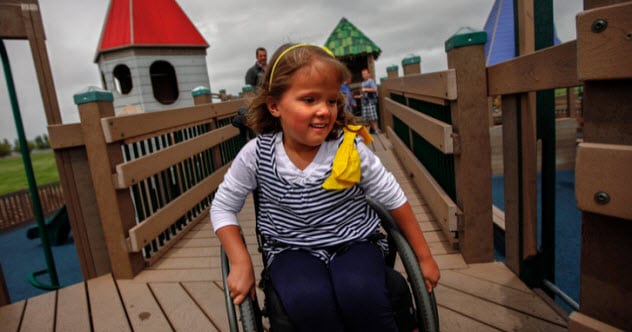 When it comes to playground design, most places focus on climbing activities involving ropes, bars, nets, and in some places, even rock-climbing equipment. While this is a lot of fun for the average kid, it leaves behind children with disabilities.

So some places like Brooklyn’s Playground in Pocatello, Idaho, have sprung up over the years to offer fun for children with special needs. Jonny Fisher built the park for his daughter, Brooklyn, to address her needs: “You create a place where kids of any ability are going to be playing together. So now those kids with disabilities are going to be shoulder to shoulder with their peers, who they normally cannot be shoulder to shoulder with.”[7]

Brooklyn’s Playground isn’t just about tending to special needs children, it’s also about fun play activities. To this end, it has some amazing structures for kids to play in, on, and all over. 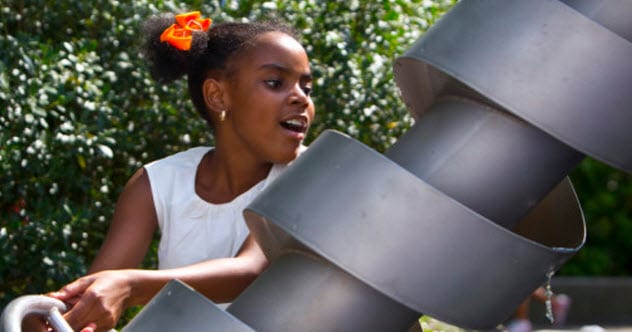 The New York Hall of Science Playground is all about incorporating playtime and learning for kids of all ages. The large playground has the usual slides, seesaws, sandpits, and even fog machines. But these are presented to teach kids about the scientific principles of motion, balance, sound, and sight of simple machines.

If you happen to be one of those parents who likes to force your kids to learn when they should be pretending to be pirates or ninjas, this is definitely the playground where you should take your children.

The playground is rather large and incorporates some unique items you won’t find on most playgrounds, such as a giant Archimedes’ screw. There are also wind pipes, a water play area, a giant climbing net, slides, sandboxes, and metal drums that kids can bang on to their parent’s dismay.

The giant spiderweb is a perfect attraction for those kids who love to climb all over the place, and their giant slide mimics the drop you feel on a roller coaster.[8] 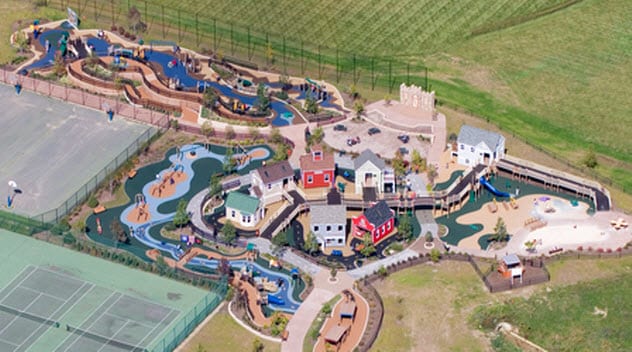 Preston’s H.O.P.E. Playground in Beachwood, Ohio, is another that was designed with the differently abled in mind so that children of all abilities can play there. Run by the Mandel Jewish Community Center of Cleveland, this is another huge park sitting on 1.5 acres of land.

The playground is privately funded and costs more than $2 million to run annually, but it can be accessed by anyone. The most alluring feature is the play village composed of two-story, make-believe playhouses connected by a raised walkway.[9]

There is also an amphitheater, a sand-and-water play area, and various gazebos, pavilions, and gaming areas for kids of all ages to play. This is the type of sprawling playground that children can get lost in for hours. But there are also adjacent basketball and tennis courts for adults who want a more mature play experience while their little ones run about screaming. 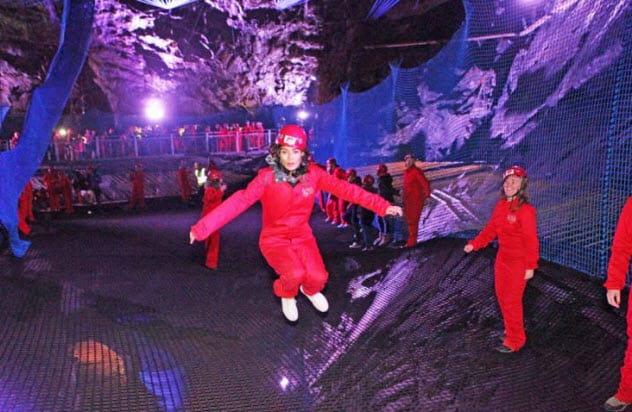 For our number one pick, we decided to focus on a playground built mostly for big kids and adults. While it’s true that many an immature man or woman can have fun playing on and around the playgrounds listed previously, Bounce Below in North Wales is definitely made for the older children and more immature adults among us.

The park is aptly named as it is a giant series of trampolines located in a beautifully lit cave system underground.[10] So . . . you bounce . . . below.

Bounce Below occupies a former slate mine, which is a cathedral-sized cavern featuring the aforementioned trampolines. It also has slides higher than two double-decker buses and over 400 square meters (4,300 ft2) of subterranean room to explore.

They do allow children in some areas. But there are age restrictions in some of the play areas, which include aboveground zip lines and a forest coaster.

Read more about bizarre and even dangerous ways people have fun on 10 Bizarre Theme Parks From Around the World and 10 Insane Rides From The World’s Most Dangerous Amusement Park.