Australia is known for many things, including its wildlife, which seems to have been spawned from Hell itself. Yet there is one part of Australia’s biodiversity that has avoided bone-chilling terror in favor of heart-melting adorability: its marsupials. Marsupials originated in South America, and there is even a marsupial native to the US: the Virginia opossum. Seventy percent of marsupials are found Down Under, however, and it is they that have become iconic. Here are some reasons why. 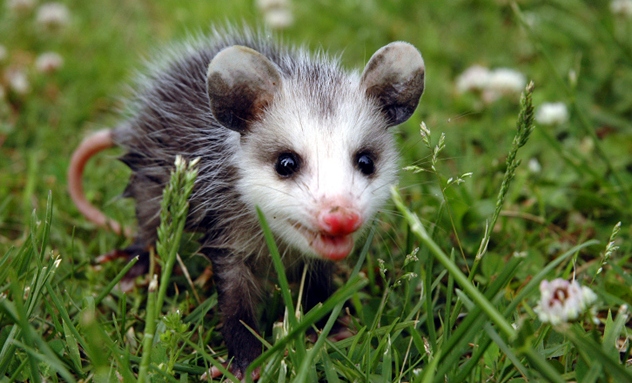 Marsupials are defined by their pouch, into which their newborns crawl after just a couple of weeks’ gestation. This unusual setup has given marsupials some odd features during early development. There’s a particular order of growth that’s common among all vertebrate embryos—that is, most mammals, amphibians, reptiles, fish, and birds. The major internal organ systems come first, then the limbs follow. Marsupials have evolved a different order, in which limbs are the first parts to develop. This is necessary so the newborn can crawl into its mother’s pouch when it’s born so early.

The early birth of marsupial babies has created a unique (and only) mammal that is known to breathe through its skin. The babies of the Julia Creek dunnart, a marsupial mouse, are delivered from the womb after only 12 days of gestation. Their lungs are too underdeveloped to be useful, so they take in all of their oxygen directly through the skin. The lungs take over gradually, and are contributing about half of a baby’s oxygen after three weeks in the pouch. 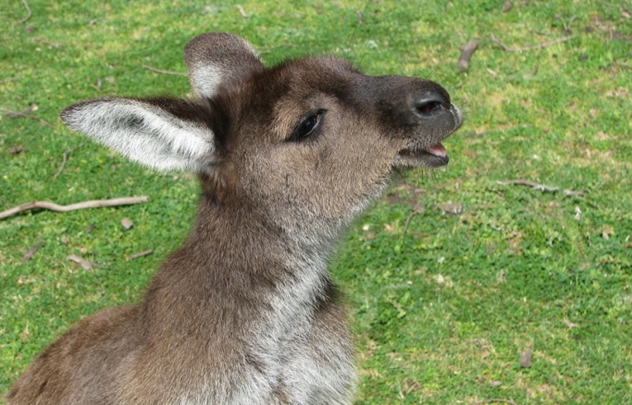 Koalas are often accused of being intoxicated by their diet of eucalyptus leaves, but that’s actually a myth. Koalas are just so lazy that they merely appear to be on drugs. The real addicts of the marsupial world are the wallabies of Tasmania.

Tasmania is the world’s largest producer of poppies for legal opiates, and the tens of thousands of acres of plants have caught the attention of the local skipping critters. They turn up, munch, and then spend the day walking around in a daze. The stoned wallabies (a great band name that’s already been taken, we’re afraid) tend to spiral about the place, and leave crop circles in their wake.

If this has left you thinking “an intoxicated mini kangaroo sounds like a good addition to a party I’m planning,” then take heed of the scandal that arose when some people did just that in Ireland. The Dublin Society for the Prevention of Cruelty to Animals received five complaints after videos showed up on Facebook of people plying a wallaby with alcohol, and letting it “dance” to the theme tune of Skippy the Bush Kangaroo. There were rumors the poor creature may have died during the encounter, but it was ultimately never identified and no body was found. 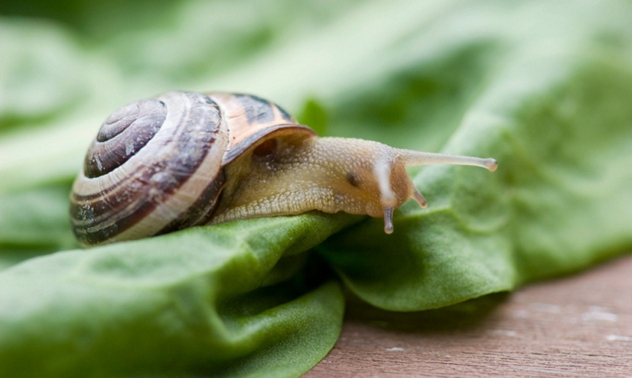 When scientists uncovered a fossil in Queensland, Australia, they were confused. The fossil was a marsupial, around the size of a ferret. Yet its teeth were like nothing they knew of in any other mammals. It had a large, blunt tooth on each side of its upper jaw, shaped like the head of a hammer. Teeth are a pretty good clue to diet, so what did this newly discovered creature (dubbed Malleodectes) eat?

The answer came from Dr. Scott Hocknull, from Queensland Museum. He noticed the teeth resembled those in an Australian lizard, the pink-tongued skink. The lizard uses its hammer teeth to crush snail shells. The newly found marsupial is no more related to the lizard than we are. Both animals evolved the same solution independently—snails are just that tasty. 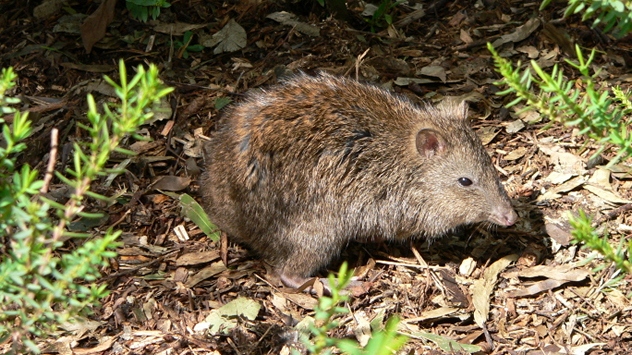 The Gilbert’s potoroo is the world’s rarest marsupial. For 120 years people thought it had gone extinct, until 1994. Forty of the rodent-like creatures (it’s nicknamed “rat kangaroo”) were found that year at Two Peoples Bay Nature Reserve, near Albany. The area was due for urbanization, until Prince Philip, husband of Queen Elizabeth II, campaigned to protect the area due to the noisy-scrub bird. Curiously, that bird was thought to have been extinct, until it was found alive in 1961, prompting conservation efforts and inadvertently saving the potoroo.

The potoroo is still critically endangered. A captive breeding facility has been set up to keep it away from predators, and some have been released to the wild. Cats, foxes, and other animals are a major threat. Conservationists are hoping to learn enough about the potoroo to be able to find other suitable sites, where it might have a better chance to survive and—maybe one day—thrive. 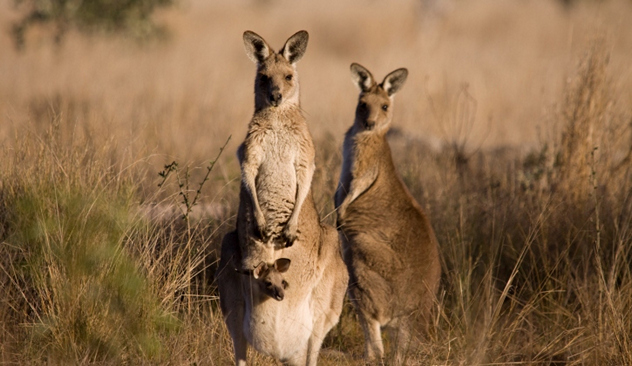 The pouch is the archetypal characteristic of marsupials. It’s half womb, half carry-cot for early infancy. It’s the key strategy marsupials possess to ensure the well-being of their offspring. That’s why biologists at Wilsons Promontory National Park were very surprised when they saw a mother kangaroo take in another female’s offspring. Even more surprisingly, the second mother simply went along with it, and took the now spare joey. The kangaroos had simply swapped children.

It’s the first time this behavior has been documented in the wild, although similar things have happened in captivity. What is also intriguing is that the swap became permanent—the kangaroos looked after their newly adopted offspring as they would their own. Scientists have since used tagging and genotype tests to uncover four swapped babies, and three simply adopted. There is no apparent reason for it—the kangaroos aren’t sisters, or other close relatives.

The researchers think it may be a case of kangaroos being overwhelmed by the presence of a predator, and not recognizing the offspring as someone else’s in a moment of panic. While the reason remains a mystery, it has taught the researchers one thing—it’s a mistake to assume that a joey in pouch is related to the kangaroo carrying it.

5Djarthia And The Little Mountain Monkey 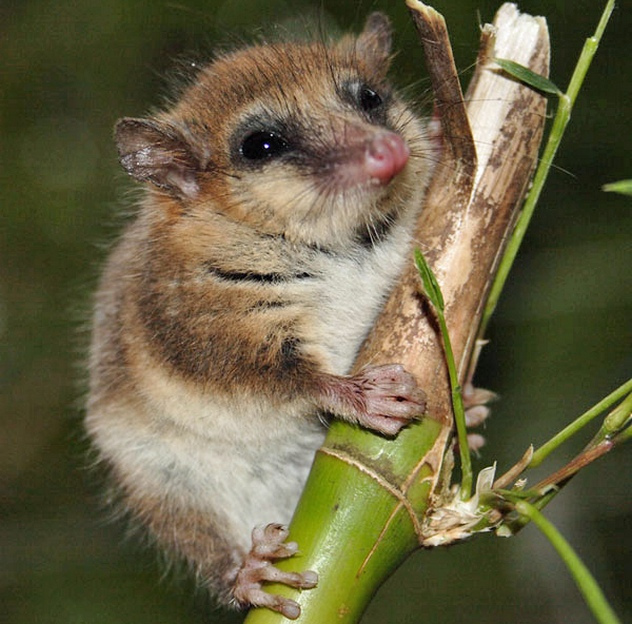 As we mentioned, marsupials actually come from South America. One species made its way to Australia around 55 million years ago and became the mother of all the marsupials there today—including koalas, kangaroos, and wombats. That pioneering creature is a small animal similar to a mouse, known as Djarthia.

Yet it appears some of Djarthia’s earliest descendants may have made their way back to South America. The little mountain monkey, or Monito del Monte, is a small tree-climbing marsupial found in the forests of Chile and Argentina. Scientists had suspected for some time that it may be more closely related to Australia’s marsupials than its brethren in South America, and new Djarthia fossils found in 2008 made this seem pretty certain. 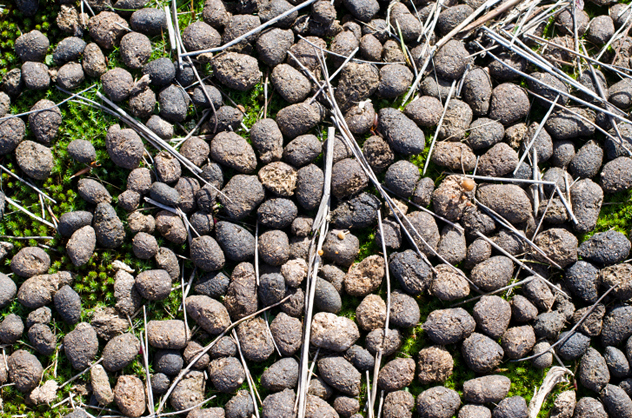 There are a bunch of different ways that animals mark their territory. We’re probably most familiar with peeing to leave a scent, but wombats have notched this all the way up to a number two. They leave small piles of their feces anywhere they want other animals to know who’s in charge—often on top of rocks, logs (the wooden sort), and even mushrooms.

Of course, the problem with most poo is that it could easily roll away. To get around this, wombats release their scat in small cubes. They release four to eight of these pellets with each bowel movement, and pile a bunch of them at around nose height, so that other wombats are certain to notice them. The poop comes out with a sticky mucus coating and a smell described as “sweet” and “peaty.”

“Wombat feces sounds awesome, can I get some?” you probably aren’t saying. But it turns out you can get some of your very own. Sort of. An Australian souvenir company is selling paper made from wombat droppings. They started with kangaroo, but people started making requests for poo-paper from other marsupials. The wombat paper—made by boiling the poo, then processing the fibrous pulp—is the most popular. 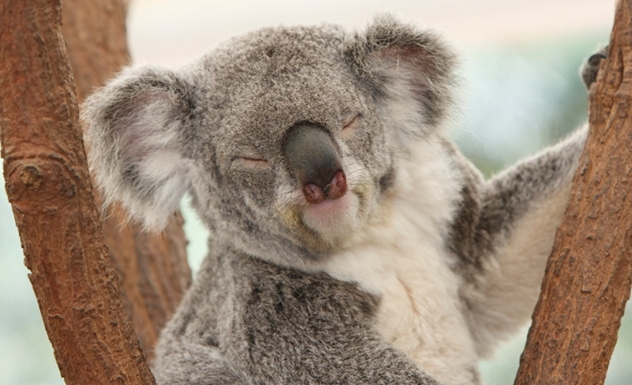 Koala populations in Australia are dying out. There are a number of reasons—loss of habitat, dog attacks, being hit by cars—but perhaps the biggest threat is an outbreak of chlamydia. Up to 90 percent of koalas are infected in some areas, and the disease is far from pleasant. It can cause blindness and infertility, and even be fatal. Koala chlamydia can be treated with antibiotics, like in humans. Koala hospitals are doing their best, but it’s hard to keep up. Koalas seem unusually prone to the disease, and no one is sure why.

There is hope. Scientists are working to understand the koala’s immune system more closely, including mapping its genes. They have made some promising observations, and vaccine trials are underway. Australia’s wildlife is worth $1 billion to its tourism economy, so even those people with a heart made of icy stone are able to get behind the work. 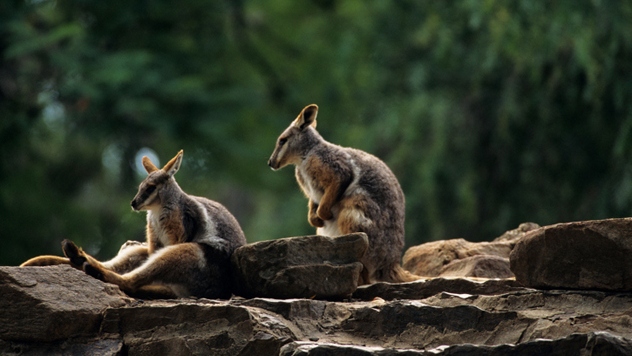 If you want to see wallabies, there’s no need to go to Australia. You could also visit Scotland, where a population of up to 60 has lived on an island in Loch Lomond since the 1940s. They’re a popular tourist attraction, but local conservationists believe they should be culled. The wallabies munch their way through vegetation that provides sustenance to native wildlife.

Scotland is not the only place wallabies have set up home. The Peak District in Southern England hosted a number of them until recently. They were released in 1940, when private zoos were banned in the UK. Numbers rose to a peak of 50, until a harsh winter in 1963 cut their population in half, and they never recovered. The final solitary female was last seen alive in 2009. A similar population sprung up in Hawaii, but has also probably died out.

When we say “koala,” do you say “aw”? If not, you are dead inside (or maybe it’s because we told you that they eat their mother’s poop). Yet for all their cuteness, the males produce a grunt that sounds very much like an old motorcycle struggling to start. Common wisdom said that this grunt was to scare off other males that have encroached on the grunter’s territory.

To be certain exactly what the koalas are saying to each other, a team led by Dr. Bill Ellis fitted a bunch of them with GPS trackers and monitored their reactions to different calls. He found the odd grunts are actually all about attracting females, rather than warding off competitors. Baby koalas also make a more fitting “yip” when they get separated from their mother, who will come to collect them.

Koalas aren’t all cuddles, though. Their grunts were used in the filming of Jurassic Park as sounds for the T. Rex.