Coins, stamps, baseball cards, comic books—people collect all sorts of things for different reasons. But the collections on this list cross the line from interesting to plain bizarre. 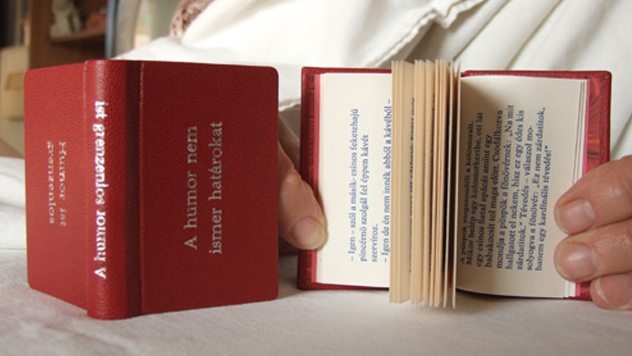 Jozsef Tari has well over 5,200 books, yet he has the world’s “smallest” library. That’s because all of the volumes on Jozsef Tari’s bookshelf are tiny—he’s the owner of the world’s biggest collection of miniature books.

Tari began collecting the mini-books in 1972. Among Tari’s literary gems are one of the world’s smallest books, measuring in at 19 by 26 millimeters (0.74 by 1 in) and others are just as unique. Some contain hand-painted china or carved wood covers, and some are bound in leather art. Several are limited edition, and his oldest are more than 100 years old. None are more than 76 millimeters (3 in) high.

“I developed my interest in miniature books while at printer school,” he said. “In the beginning, I kept them in a paper box, but later put up shelves so I could have them on display. I always try to get several copies of each publication so I can exchange them with other collectors.”

Martin Parr of the UK says he has a “very strong collecting gene.” Back in the 1980s, he loaded up on Margaret Thatcher memorabilia, and he eventually found a new subject for obsession: Osama Bin Laden. His a terrifying collection of Osama merchandise now includes coffee mugs, squeaky dolls, kulfa balls, watches, Osama toilet paper, and more.

“All of these failed dictators with massive egos allowed these goods to be produced,” he says. “It speaks volumes about their personalities.”

Considered the “Hugh Hefner of the Love Doll world,” Bob Gibbins of the UK is recognized as having the world’s largest collection of silicone companions. Bob has spent over $100,000 acquiring a total of 240 Love Dolls, beating out a prior record holder from Japan who owned 100.

A mechanic by trade, Gibbins admits that he spends a lot of time grooming, trimming, and dressing the life-sized dolls, but he doesn’t keep them around for the “traditional” reasons. The 61-year-old has been known by locals to take the dolls out for drives in his car, or for special photo shoots in the mountains.

Oh, and Bob’s married. His wife Elizabeth says she doesn’t mind his bizarre hobby. In fact, she enjoys shopping for clothes for the dolls, and says the collection has brought her closer with her husband.

“We have probably spent more time together since he’s been having these dolls than we did before,” she said. “Because if he didn’t have them, he would be doing something else, like making a car or something.”

Remember when you were just a little tyke, and your mom gave you a rubber ducky to play with in the bath tub? Well, neither do I. But you’d probably remember swimming in a collection as big as Charlotte Lee’s—one that would take at least a large swimming pool to accommodate it.

The 42-year-old from Seattle has acquired more than 5,000 of the rubber bath buddies. The collection began in 1996, when friends started giving them to Lee as gifts.

With the help of her husband, she went on to amass an impressive gathering—ducks that squeak, ducks that are scented, ducks that glow in the dark, and ducks of nearly every style imaginable. The result landed her a spot in Guinness World Records for having the “largest collection of rubber ducks” in 2003, 2007, and 2011.

With the entire basement of her condo now used for housing the birds, Lee hopes to find a museum willing to adopt part of her collection. She’s also become more picky because of space constraints, although it’s usually her husband who brings them home now.

“I like the ducks, he likes the hunt,” she said. “It’s a good partnership.”

Calr McCoidhas a curious collection of Miley Cyrus memorabilia—one proudly displayed across his upper body in the form of 21 tribute tattoos. They include song titles, album titles, and various portraits of the pop singer, forming the largest known collection of its kind.

Each of the 39-year-old’s 10 knuckles is tattooed with a letter, which together spell out Miley Cyrus’s full name. His most recent tattoo depicts a tongue-wagging Miley, inspired by her infamous VMA performance.

“Loads of people get all sorts of things tattooed onto their bodies,” says the British man, “like Chinese symbols, or pictures of cartoon characters. Why shouldn’t I be allowed to have loads of Miley Cyrus tattoos?”

And while “Liberty Walk” and “Can’t Be Tamed” line the insides of his arms, perhaps it’s the tattoo of another Miley Cyrus song title, on the outside of his right forearm, that tells it best. It reads: OBSESSED.

Jian Yang has a Barbie collection big enough to make any 10-year-old girl blush. He’s been collecting Barbies since he was 13 and now has more than 6,000.

His first doll was a “Great Shape” Barbie in a spandex gym outfit. Twenty years later, the man from Singapore figures he has spent an easy $392,000 on the hobby.

“When you meet me outside of this, I’m not that kind of guy,” says Yang. “I’m not what you expect from a guy that collects dolls.”

The collection now fills a floor-to-ceiling glass case inside a room painted in “Barbie Pink.” And, yes, women who see the dolls are rarely pleased.

“They look at dolls and go, ‘Okay, that’s the competition’,” says Yang, “which is quite troubling but it’s a reality.”

It often seems you can never find a good ink pen when you need it, but Costas Schuler of California will never have that problem. A graphic designer by day, Schuler collects ink pens in his spare time, 10,000 of which now decorate the exterior of his 1981 Mercedes. He attached them to the “Mercedes Pens” using silicone glue, and they hardly put a dent in his overall collection. Prior to a recent donation drive that netted 30,000 pens, he had already built up a reserve of 70,000. His goal is an even million.

“Doing this to your car and then driving it around is kind of gutsy,” he said. “There’s not a lot of people that do that . . . I consider my car a picture of what it looks like when God smiles.”

Schuler also creates works of art (“Pentings”), which he donates to schools and other places where the spirit of art can “uplift” people.

Becky Martz is a fanatic for collecting something you might dismiss as trash but that she calls “tiny little works of art.” She collects the peel-off labels found on supermarket bananas, and she has nabbed nearly 8,000 of them so far.

Martz visits up to 25 different supermarkets each week to find the labels. This has forced her to struggle for ways to use bananas in her cooking.

“I make a lot of banana bread,” she says. “But sometimes I buy the bananas, take off the labels, and hand the bananas right back to the clerk.”

Her favorite find is also her oldest one: a 1960s brand from Sweden bearing the face of an angelic blond boy. After getting the labels, she strips them of their original glue with paint thinner. She then stores them on graph paper in a series of notebooks.

Zack Hample is the “King of the Ballhawks.” The Guilford College graduate has amassed a collection of 7,100 game balls from 50 different stadiums since he began his journey in 1991. Doing so has gotten him featured in Sports Illustrated, Playboy magazine, the Associated Press, and scores of other media outlets.

Hample has written three books, including How To Snag Major League Baseballs and was invited for an appearance on The Tonight Show to talk about his scores. His collection features commemorative balls, standard balls, and valuable balls. And then there are ones torn to a unique shape from gameplay. Hample simply labels these as “weird.” 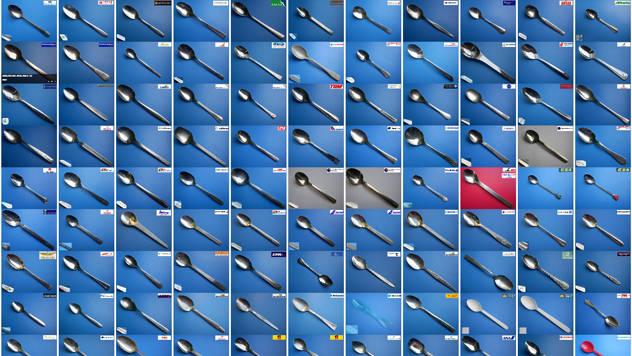 Dieter Kapsch wants to drum on your head with his awesome spoon collection.

He has collected 1,760 spoons from 447 different airlines over the course of13 years. They include spoons from the now-defunct Imperial Airways, as well as one from a Pan Am flying boat from the 1930s.

The collection began while he was on vacation in Spain with his sister. She just thought it would be a good idea to keep a spoon from the airline handy.

“After returning back home she left the spoon with me and I was using it,” he said. “From that point, I decided to collect spoons from every airline I was flying with, and after some time, I wanted to have them all.”

Dieter has also taken pictures of each spoon, and cataloged them on Flickr for the world to see.

Shawn W. Larson is a former music producer who now enjoys photography, writing, and spending time with his family.