True crabs are crustaceans from the infraorder Brachyura, with over 4,500 described species known to science. They are widely recognized as having short, projecting tails and abdomens hidden underneath their thorax. From fast-flowing rivers to tropical coral reefs to deep-sea hydrothermal vents, these crabs have adapted and thrived across a variety of aquatic habitats.

But not every crab is as it seems. There are several other species that look similar (including hermit crabs, horseshoe crabs, king crabs, and porcelain crabs), but none of these are considered true crabs. This list aims to introduce the diverse world of true crabs, including those that farm food within their own hair, wave anemones as weapons, or breathe through a tube. 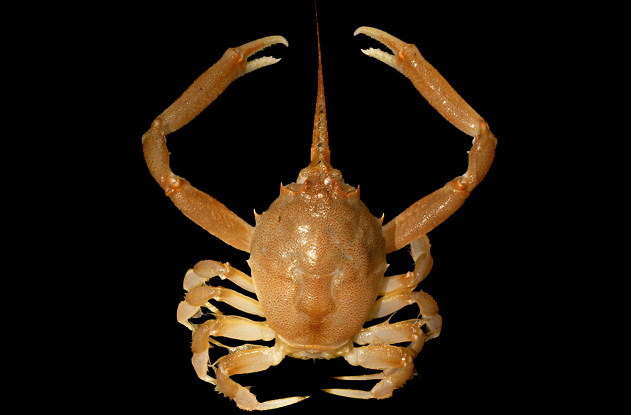 This small species of burrowing crab grows to a maximum size of 5 centimeters (2 in) and is found throughout the North Atlantic, North Sea, and some parts of the Mediterranean. It gets its name from the patterns on its carapace (shell) which are said to resemble a human face.

The masked crab’s most striking feature is the two elongated antennae at the head end of its carapace. As the crabs spend most of their time buried under the sand, the antennae act as a breathing tube, drawing oxygenated water down into sediment. This allows the crab to breathe while it hunts within the seabed, searching for polychaete worms and bivalve mollusks.

While it’s difficult to determine the sex of most species of crab, masked crabs display a form of sexual dimorphism. The first pair of pereopods, or walking limbs, of the males are twice the length of their carapace. In females, they’re the same length as their carapace. 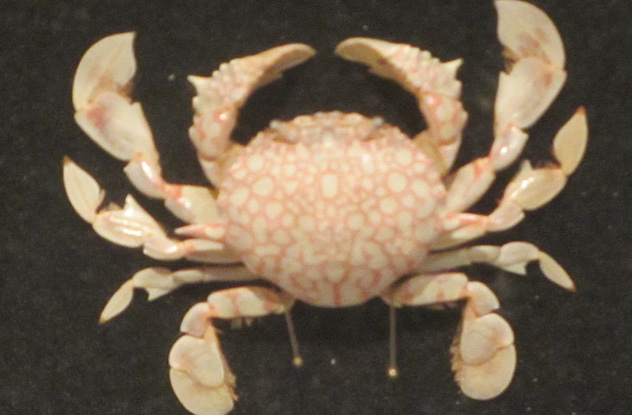 The flower moon crab, also known as the two-spined burrowing sand crab or reticulated surf crab, hails from the tropical waters of the Indo-Pacific and Australia. They inhabit sandy sea-grass beds from the low tide mark down to around 15 meters (50 ft). They are most active at night, spending the day buried under the sediment and are distinguished by their rounded beige to yellow carapace with a pair of elongated spines on either side.

Flower moon crabs hold their pincers close to their body, in a similar manner to box crabs, and also resemble swimming crabs with their flattened carapaces. However, their limbs are flattened as well, with hind leg paddles that swim, dig, and burrow backward into the sand. Their hind limbs also lack the fringing hairs present in other crab species, which aids their digging abilities further.

Unlike many other crab species, flower moon crabs take up oxygen-rich water through openings near their eye sockets, drawing it through hair-lined channels to their chelipeds. There, unwanted particles are filtered out using a dense mat of hair. 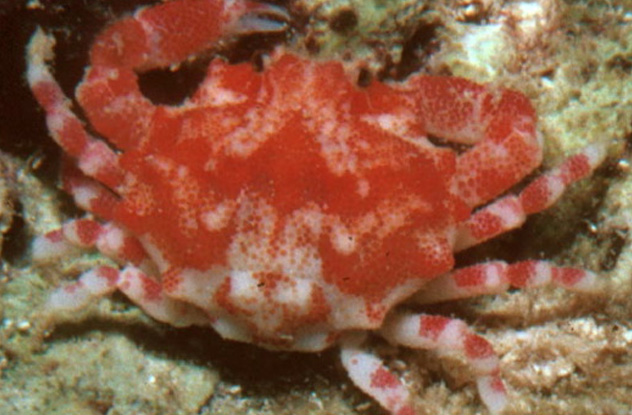 The raspberry crab is also known as the red leucosiidae crab and gets its name because it looks like—you’ve guessed it—a raspberry. Found between the high and low tidal zones, they are opportunistic carnivorous feeders, consuming small invertebrates and other organic materials.

The carapace of this little crab is uneven, with 12 symmetrically arranged protruding nodules around the edges. It has short, sturdy legs and chelipeds, which it uses to feed on any tiny invertebrates and organic material its finds. They are a widespread species and are found in shallow waters across the Red Sea through to Mozambique, Mauritius, and India, as well as Hawaii and Japan.

This crab isn’t to be confused with the similar strawberry crab (Pelia mutica) from the Gulf of Mexico and the Northern Atlantic.

Like a walking work of art, the gaudy clown crab is one of the smallest species featured on this list but is one of the most colorful.

The gaudy clown crab attains a maximum size of around 2.5 centimeters (1 in) and is found on or near the intertidal zones. In particular, it lives in the rocky coral reefs of the Gulf of Mexico, the Caribbean, and the eastern Atlantic down through to southern Brazil. The patterning on their carapaces vary, but individual clown crabs tend to be consistent in color, with a yellow carapace covered in orange or red markings and black outlines, interspersed with small black and yellow spots.

Despite their eye-catching coloration, they are extremely elusive, preferring to venture out onto the reef flats under the cover of darkness to feed. Colony-forming Zoanthid corals are their favorite meal of choice. The crabs store the palytoxins produced by the zoas to use as a weapon against potential predators. 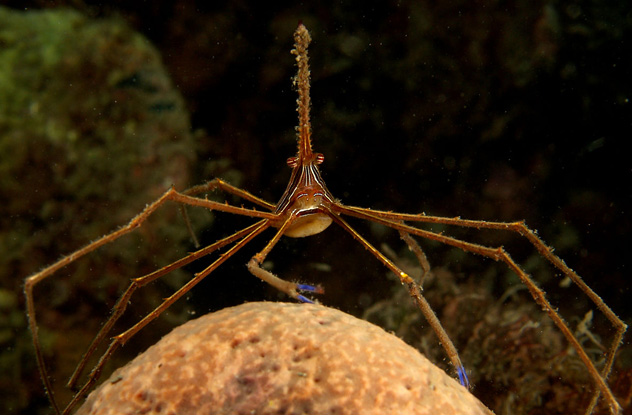 The slender arrowhead crab has a triangular, almost guitar-shaped body, tapering out into an elongated rostrum with serrated edges. They have long, spider-like legs, which can reach up to 10 centimeters (4 in) in length and three times the length of their bodies. Despite this delicate appearance, arrowhead crabs are aggressive scavengers, preying on feather duster worms and bristle worms, as well as picking through detritus.

Their unique appearance has made them a favorite among aquarists, although they are considered neither reef-safe nor fish-safe, as they happily eat corals and have been known to attack slow-moving or sleeping fish. Arrowhead crabs are also extremely territorial, especially with conspecifics. Like many crab species, they are nocturnal and spend the day hiding or defending their homes on the reef or rock walls from trespassers. They can be found down to 10 meters (33 ft) in the western and eastern Atlantic and Caribbean Sea. 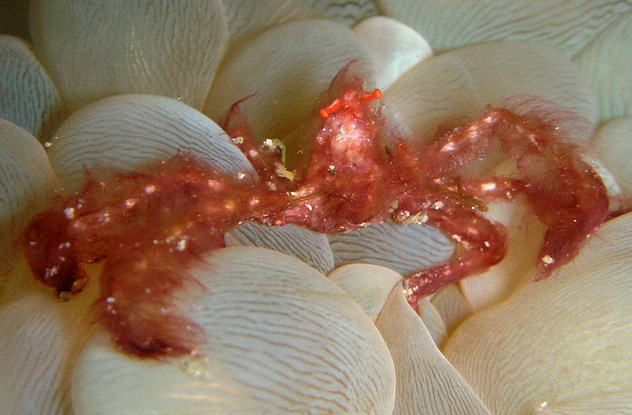 Looking like the rock star of the crab world, the orangutan crab is a small species of spider crab or decorator crab from the family Inachidae, found throughout tropical Indo-Pacific waters. They are often found with the grape or bubble coral species Plerogyra sinuosa on protected reef flats.

The crab gets its name from the thick covering of fine, red and brown hairs adorning its legs and carapace, much like its great ape namesake found in Borneo and Sumatra. The hair traps debris and detritus, while also providing vital camouflage from the crab’s numerous predators.

Being spider crabs, these animals have elongated arms in comparison to their bodies, with pincers to groom out the food collected within their hair. This cryptic species is very elusive, so little else is known about its life cycle or preferences. 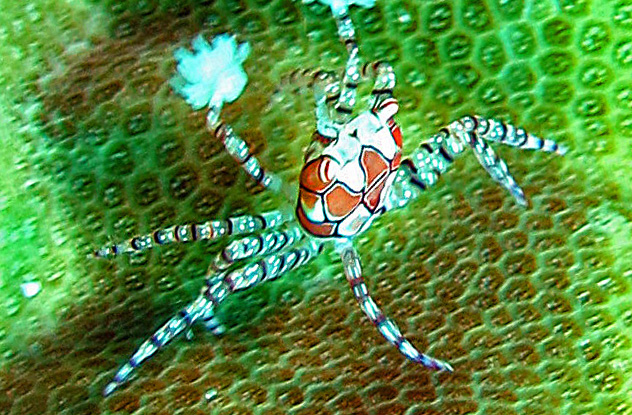 The pom-pom crab, also known as the boxer crab, is a small species from the family Xanthidae found across shallow reef environments in the tropical Indo-Pacific. Another popular aquarium species, it’s noted for the symbiotic relationship it shares with the sea anemone Triactis producta.

The pom-pom crab will grasp an anemone between each modified front claw and brandish it to deter predators. The anemones also sting and immobilize prey, allowing the crab to obtain an easy meal. The crab cannot feed directly using the anemones, so it harvests the accumulated food using its maxillipeds (mouthparts).

In exchange, the anemone is transported and receives wider access to a larger array of food sources. Neither species is dependent on the other, though, and in the absence of an anemone, the crab will wave small sponges or pieces of coral instead. 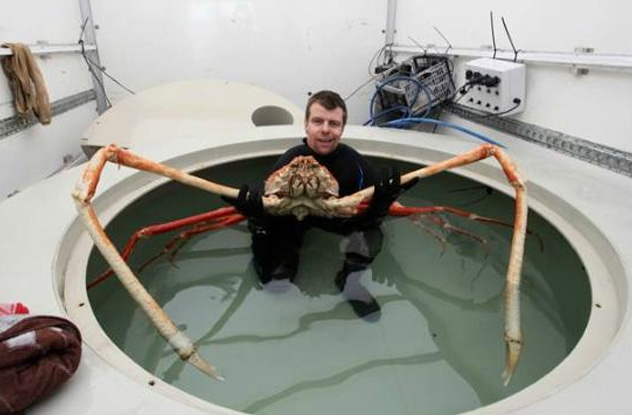 One of the most instantly recognizable true crabs, the Japanese spider crab is the world’s largest crab species, either aquatic or terrestrial. They have the largest leg span of any living arthropod, reaching up to 3.8 meters (12.5 ft) from claw to claw. The carapace can measure 40 centimeters (16 in) across.

Despite their size, Japanese spider crabs are of a gentle disposition and pose no threat to humans. They are considered omnivores, consuming a variety of plant matter, mollusks, and other crustaceans along with dead and decaying animals.

As their name suggests, the crabs are found around Japan and neighboring parts of the Pacific Ocean, dwelling around vents and caves at depths of 50–600 meters (160–2,000 ft). They are also the subject of dedicated fisheries, as spider crab meat is considered a delicacy. As a result, there are bans on catching and hunting spiders crab during the springtime, when the crabs move to shallow waters to reproduce. 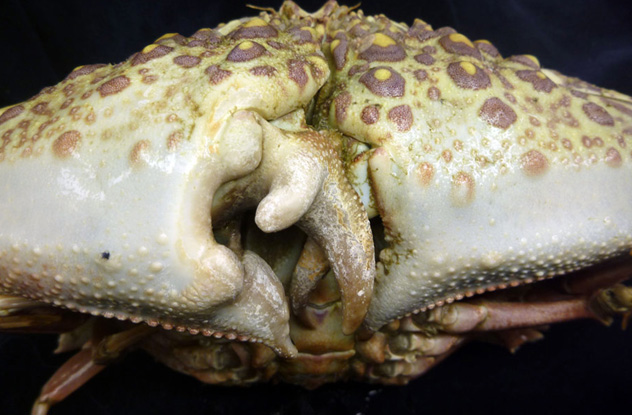 The shame-faced crab, otherwise referred to as the smooth or red-spotted box crab, is a relatively small species of crab found across the Mediterranean Sea and the Atlantic Ocean from Portugal to Mauritania. They get their curious name from their characteristic stance, holding their chelipeds close to their carapace and covering their face, as if in shame.

Shame-faced crabs are nocturnal hunters, spending the day buried in the sand with just their eyes and upper carapace and claws visible. These enlarged front claws are not a means of disguising embarrassment but are used to crack apart the shells of their mollusk prey and to dig themselves into the sand. During periods of inactivity under the sand, the claws also provide an air pocket within which to breathe.

The calappa species of crabs are right-handed, with the larger right claw used like scissors to cut open the shells of dextral snails. 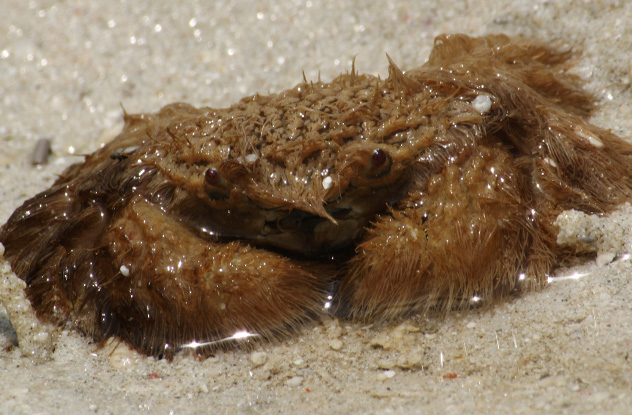 The teddy bear crab is also referred to as the hairy crab thanks to its coating of long, silky hairs (“setae“) all over its carapace and legs. These hairs protect against predators, camouflaging the crab against the rocky reef background and breaking up the outline of its body. The setae also act as a net, trapping dirt, mud particles, and other bits of detritus, which further enhances its disguise.

The crabs predominantly appear along low intertidal reefs, rocky and pebble shorelines, and Sargassum-covered areas. They can be found across the Red Sea, Indo-Pacific, Australia, and Japan.

Teddy bear crabs feed mostly on larger pieces of algae during the low tide. They are highly fecund. Female teddy bear crabs carry 300–800 eggs at a time and breed continuously between March and December to ensure juvenile recruitment in their home range.