Considering their aversion to water, felines probably won’t be rescuing Timmy from the well anytime soon. However, they can hold their own with faithful dogs when it comes to saving people from peril, although the cats don’t exhibit a tail-wagging, eager-to-please attitude while doing so. In fact, felines often seem a bit cross about the necessity of such rescues, probably impatient with the cluelessness of us humans!

10 The Cat Who Supplied A Supper 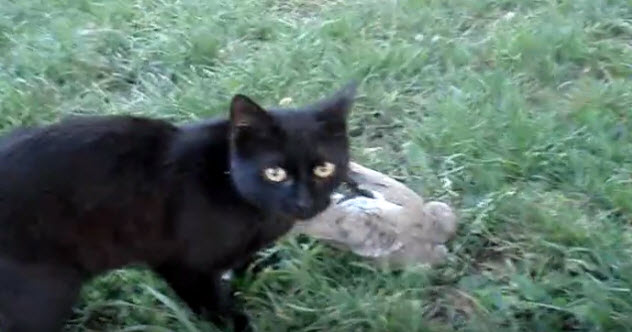 When Sir Henry Wyatt was imprisoned—probably in Scotland—in the late 1400s, the accommodations left much to be desired, and the fare was abysmal. Fortunately, according to an account by Wyatt’s great-great-grandson, Thomas Scott, the despondent man began receiving visits from a friendly feline.

The motherly cat must have decided that her new pal could use some fattening up because she began bringing him dead pigeons. Wyatt talked a jailer into cooking the birds for him. While the result wouldn’t actually have been squab, which comes from pre-fledged pigeons, it apparently far outdid whatever prison provisions had been served earlier.

The account describes the cat as an “accator” (caterer) because she provided the detainee with company and warmth as well as the makings for an occasional hot meal. Once Wyatt was released, no doubt he remembered his debt to the cat who kept coming, caring, and catering.

9 The Cat Who Spotted A Stray

Roaming the streets of Obninsk, Russia, one evening in January 2015, a motherly alley cat named Masha came upon a box in front of an apartment building. Upon seeing a baby boy inside, perhaps she thought a careless human had lost its kitten. At any rate, the tabby climbed into the box with the infant and began meowing an alarm.

A woman taking out her garbage heard Masha’s strident complaint and went to see what was the matter, thus relieving the cat of her self-imposed babysitting duty. Due to his furry, purry heating pad, the abandoned infant—clothed in a jumpsuit—was unharmed by his exposure to the subzero temperatures.

Masha, who had always been popular with residents of the building, became even more so after that incident. No doubt she would have said that she wasn’t a heroine, just doing what came naturally!

8 The Cat Who Screamed An SOS

Masha wasn’t the only protective feline who had to make some noise to get her point across. In Wandin North, Australia, Craig Geeves awoke in the wee hours one morning in August 2014 to find his tabby cat, Sully, crouched on his chest and screaming in his face. Perhaps the animal had started out with a more muted meow or two or even that staring, attempted telepathy thing felines sometimes do.

When such subtle measures didn’t work, she must have cranked up the volume, as if to say, “What do you not get about the house being on fire?” By the time Geeves came to his senses enough to smell smoke, Sully was on his head, no doubt trying to pound her message into his brain with all her paws. He grabbed up the cat and ran to safety, although his house was a total loss.

7 The Cat Who Sniffed A Stink 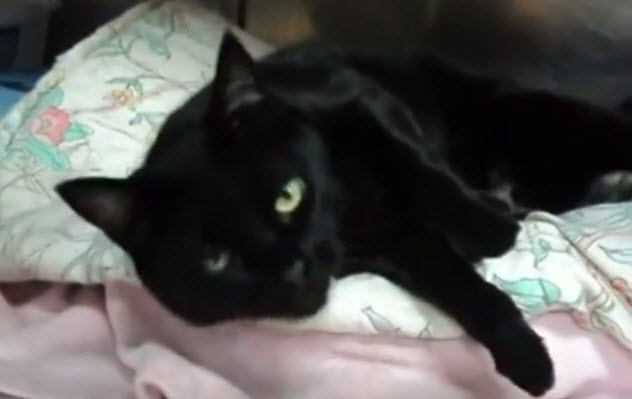 A cat’s acute sense of smell often has been the saving factor in other situations as well. A long-haired, black kitten made an adorable addition to Greg and Trudy Guy’s household in Great Falls, Montana. However, Schnautzie used her schnozzle to prove herself capable of more than cuteness one October night in 2007.

Around 2:00 AM, she climbed onto the Guys’ bed and began batting Trudy’s nose with her paw. Believing the kitten to be just playing, Trudy initially tried to ignore her but then noticed that Schnautzie also was snuffling in an uneasy sort of way.

Perhaps she was attempting to say, “Use your own nose and tell me if you smell what I’m smelling.” Once fully awake, the Guys heard a hissing sound that wasn’t coming from their pet. The broken gas pipe making all the noise could have caused a catastrophic explosion had the kitten not found its odor worrisome.

6 The Cat Who Smelled A Sickness 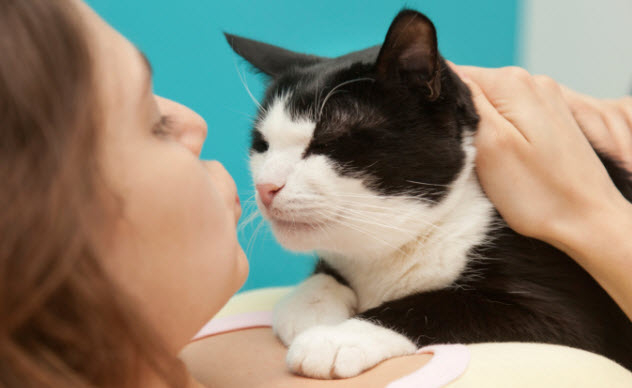 Cats apparently can sniff out even more subtle scents than smoke or gas. When a formerly aloof cat suddenly becomes touchy-feely, it’s a good idea to pay attention. Sue MacKenzie of Scunthorpe, England, owned a 24-year-old, black-and-white tomcat, appropriately named Tom, who had never been particularly friendly. In summer 2014, however, he suddenly began patting Sue on the back of the neck any chance he got and complaining loudly.

Indeed, there was. Upon feeling the back of her neck, Sue discovered a lump, which turned out to be stage three Hodgkin’s lymphoma. Thanks to Tom, it was treated successfully, and he went back to being his old, standoffish self. Even Sue’s doctor told her she should have listened to the cat.

5 The Cat Who Saw A Situation

A feline heroine doesn’t always have to smell out a problem. Often, she only needs to be on hand to see it. Susan Marsh-Armstrong’s female, black-and-white cat, Charley, so adorably adoring when a rescued kitten, continued to stick so close to her benefactor that she was beginning to become a nuisance. One night in Haltwhistle, Northumberland, however, her constant presence turned into an asset rather than a liability.

Susan had arisen to go to the bathroom, where she collapsed onto the floor from an attack of hypoglycemia. Charley, who had always declined to pay much attention to other members of the family, then made her way to the bed where Susan’s husband, Kevin, was sleeping.

Jumping up beside the oblivious man, the cat began batting at his hand with her paw and swiping at his face with her tongue, interspersing these actions with an occasional squeak. He attempted to brush her off in an irritated sort of way, but she kept returning to the attack. Pat. Lick. Squeak. Pat. Lick. Squeak.

Finally realizing that the cat’s actions were more than a little unusual, Kevin followed her to the bathroom. There, he was able to revive his wife by giving her a shot of glucogen. Charley probably was thinking, If this happens again, I’d better save time by biting him!

4 The Cat Who Socked A Snatcher

Four-year-old Jeremy Triantafilo suffered some dog bites while innocently playing on his bike in front of his Bakersfield, California, home in May 2014. Security footage showed a villainous-looking neighborhood dog slinking around a vehicle parked in the driveway to sneak up on the boy. The animal then knocked over Jeremy’s bike and latched onto his leg in an apparent effort to drag him away.

That was when one of the boy’s best friends, his tabby cat, Tara, sprang into action. She cat-apulted herself into the side of the startled dog, who wisely took to his heels just before Jeremy’s mother arrived on the scene. Tara pursued the interloper for a short distance down the sidewalk before dashing back to Jeremy’s side.

No doubt she was determined that no mangy, flea-bitten, son of a literal you-know-what was going to get her boy! Video of the event posted on YouTube won Tara an SPCA award, which usually goes to hero dogs. In this case, however, a cat obviously had the upper paw.

3 The Cat Who Startled A Savager 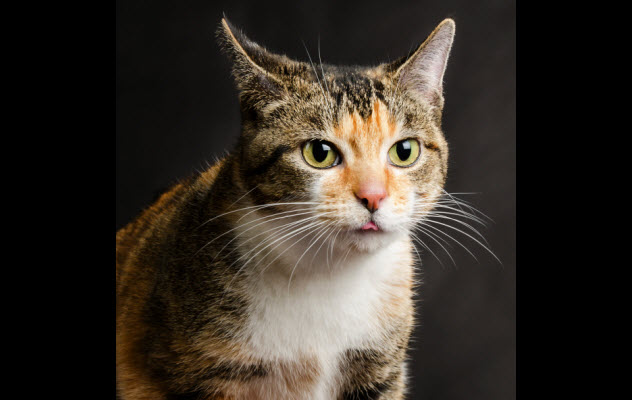 Tara isn’t the only female cat with a don’t-touch-my-family attitude. Cherry Woods of Pearland, Texas, was walking back to her home early one morning in May 2010 when two pit bulls charged her, repeatedly knocking her off her feet as she tried to ward them off. Alerted by her screams, her husband, Harold, ran from the house but wasn’t successful in driving away the dogs, either.

That’s when the couple’s usually timid tortoiseshell cat, Lima, sprang from the bushes, hissing and clawing. Her sudden appearance distracted the dogs enough that Harold was able to get his wife inside the house.

The newspaper account doesn’t specify how Lima managed to stay unscathed. Perhaps she beat a strategic retreat into the bushes again or perhaps she fixed the dogs with a “Go ahead, make my day, pits” sort of glare. Apparently, you don’t want to mess with Texas torties when they have their dander up!

2 The Cat Who Sensed A Serpent

Dogs aren’t the only enemies with whom a protective cat may have to contend. While sleeping with her two-year-old daughter, Zara, in January 2013, a Lismore, Australia, woman, Tess Guthrie, woke to hear the family cat, Duchess, hissing at something in the dark bedroom. The cat had been acting strangely for days, so Tess grabbed her cell phone to see what the problem was this time. By the cell phone’s light, she saw a python wrapped around her daughter’s arm.

The snake bit the child three times before her mother’s frantic yanking finally managed to dislodge it. Grabbing Zara, Tess scurried to her father’s house next door to call for help.

The python was released back into the wild, but Duchess made herself scarce after the incident, perhaps in a huff over nobody heeding her prior warnings. Or perhaps she realized how easy it would be for a huge reptile to put the squeeze on a cat, too.

1 The Cat Who Stopped A Suicide

Finally, it’s often a cat’s affection which saves the day. In summer 2010, Staff Sergeant Jesse Knott rescued an abused, gray, tabby-striped cat in Afghanistan and named her Koshka. That winter, the soldier became depressed after two of his friends were killed by a suicide bomber and his marriage began to disintegrate.

Knott planned to commit suicide, but Koshka seemed to sense something was wrong. She started to ram her head into him and swipe at his forehead as if to say, “Get those thoughts out of your brain right now! I’m still here, and I ain’t chopped liver, though I wouldn’t mind some for supper.”

Brought back to his senses by the faithful cat, Knott devised a plan to get her back to the States, where she was taken in by his grateful parents. No doubt many other temporarily suicidal people have been saved by the affection—or even the dependence—of cats like Koshka.

Audrey Stallsmith lives on a small farm where the cats are more hoggish than heroic. She is the author of the Thyme Will Tell mystery series from WaterBrook Press, a division of Random House, as well as an e-book of humorous short romances called Love and Other Lunacies.