Not everyone is the perfect flirt. Courting is so very difficult, especially when you’re a Greek god or deity that needs an incredibly specific pound of flesh. Despite their otherworldly powers, the 10 immortal beings in this list were looking for love . . . and failing miserably. 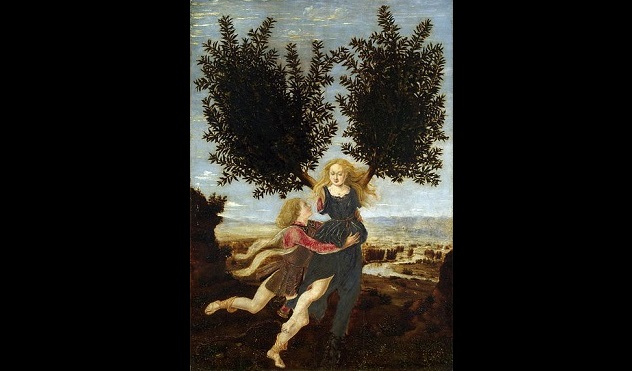 Daphne was the daughter of the river god Peneus. Apollo, the god of the Sun and music, fell in love with Daphne, but unfortunately, she didn’t want anything to do with men.

One day, Apollo was chasing Daphne through the woods, and obviously, this freaked her out a little bit. Desperate, she called for help. Daphne prayed both to her father and to the Earth, asking for a little assistance. And that’s when she turned into a laurel tree.

When Apollo found out Daphne had been transformed into a plant, he broke off one of her branches and turned it into a wreath. He then wore it in remembrance of his love for her. This idea of a laurel wreath was then used by the Greeks to honor poets, athletes, and triumphant warriors. Of course, this probably didn’t make Daphne feel any better. Great job turning her into a tree, Pops (or Mother Earth). 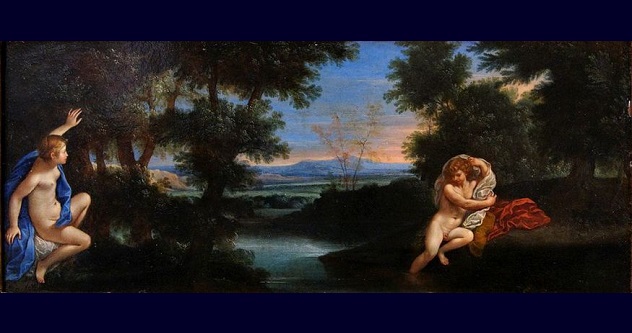 This is the story of how Hermaphroditus came to be, well, a hermaphrodite. Some say he was born that way, courtesy of his parents, Aphrodite and Hermes. But others tell a different tale.

According to some legends, it was all thanks to a nymph named Salmacis. One day, she was relaxing in her little river when, suddenly, she spotted Hermaphroditus. She was immediately smitten with the boy, but sadly, he did not return her love.

That’s when Salmacis decided to hide and watch Hermaphroditus strip down and jump into the river. As soon as he hit the water, Salmacis took a chance and grabbed hold of the boy. As Hermaphroditus began to struggle, Salmacis wished the gods would make it so they’d never be apart. Unfortunately for Hermaphroditus, they granted her wish . . . literally.

Hermaphroditus and Salmacis were combined into one body, and when he came out of the river, Hermaphroditus was both man and woman. Now, you’d think his godly parents would help him in a situation like this, right? Nah. Evidently, they had other things to do that day. 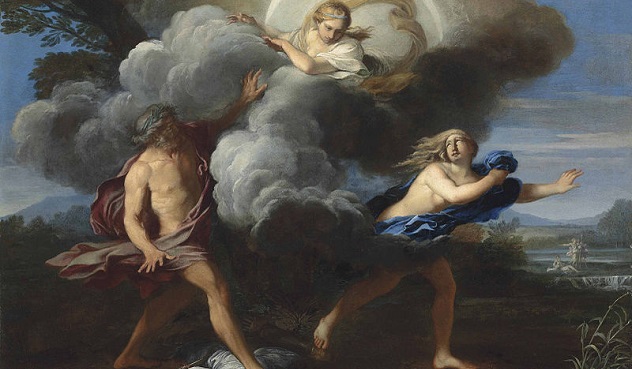 The goddess of virginity and chastity, Artemis wasn’t really all that into guys. Neither was Arethusa, for that matter. After all, she was a follower of Artemis, so she was clearly against the whole marriage and love thing. Alpheus, on the other hand, was your typical, lustful river god who just didn’t care. Unfortunately, Arethusa chose to swim in his river one day, and he tried to take her.

Naturally, Arethusa fled like any mythological female who didn’t want the affections of a man. But Alpheus wouldn’t stop, forcing a tired Arethusa to beg Artemis for help. The goddess responded by transforming Arethusa into a spring, thus creating an underground channel that ended near Syracuse.

However, since Alpheus was a water deity, he transformed himself into a river and went down the same channel, mingling with her waters in Sicily. So in the end, she was never truly free of him. 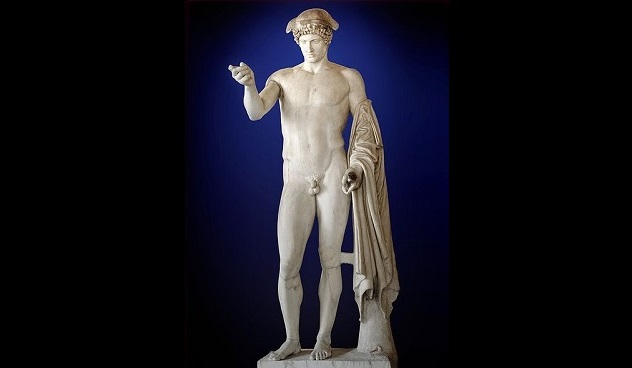 A psychopomp and messenger to the gods, Hermes was an oversexed deity who fell in love with Apemosyne, a princess of Crete and daughter of Catreus (who, in turn, was the son of King Minos). During a trip to Rhodes, Apemosyne was spotted by Hermes, and the god started chasing after her. However, she was much faster and managed to elude the trickster.

But Hermes was well-known for his cleverness and mischievous nature. He laid some hides down along a road, knowing the princess would walk down this path to bathe in the nearby river. And when she appeared, Apemosyne slipped, giving Hermes a chance to have his way with her.

Unfortunately for Apemosyne, she became pregnant with Hermes’s child. When she tried to explain to her brother, Althaemenes, what had happened, he didn’t believe her. After all, why would a god rape a mortal girl? In order to punish her for “telling lies,” Althaemenes kicked his sister to death. Isn’t brotherly love just peachy? 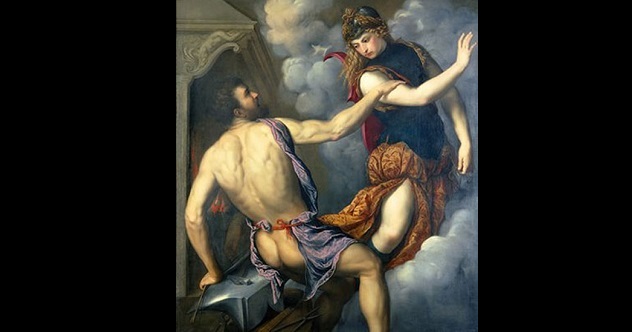 Hephaestus was a deformed, ugly blacksmith, but his parentage is up for debate. Some say he’s the son of both Zeus and Hera, while others claim he descended from Hera alone. Because of his lameness, Hera threw him from Mt. Olympus, and he was raised by his Titan aunts, Thetis and Eurynome.

While he eventually married Aphrodite, Hephaestus once attempted to rape Athena, but that failed miserably. After all, she’s still known as one of the three virgin goddesses. Instead, his semen fell to Earth (aka the goddess Gaea) and out sprang a child. Gaea wasn’t too happy about this sudden birth, and she refused to accept the child as her own.

Interestingly, Athena held no ill will against Hephaestus for trying to take away her precious virginity, and she acted as a foster mother for his new child. (Greek deities could occasionally be pretty cool.) The child was named Erichthonius, and he was helped by his adoptive mother to become a king of Athens. 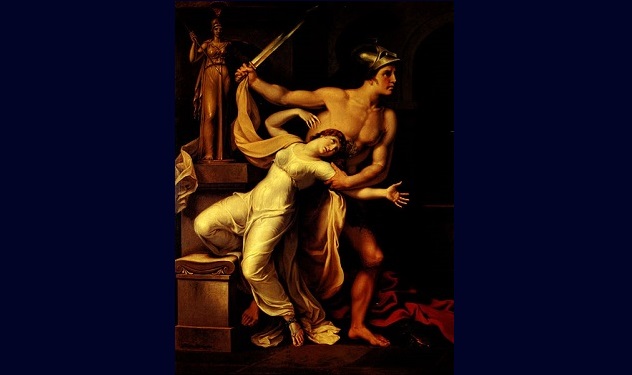 Ah, here’s Apollo again, but this time, he was simply tricked. Once, the god fell in love with the very beautiful daughter of the king and queen of Troy. Her name was Cassandra (or Alexandra), and Apollo stupidly offered to reward her with the powers of prophecy in exchange for her love. She agreed, but she didn’t actually follow through on her promise.

In retaliation, Apollo cursed her. Now, no one would ever believe her prophecies. If she’d refused his deal in the first place, she might not have been raped by Ajax the Lesser during the Trojan War (as depicted above). And maybe she wouldn’t have been killed with her captor, Agamemnon.

In another account, Cassandra and her brother, Helenus, spent the night at one of Apollo’s temples. When their parents returned the next day to fetch them, they found the two siblings entangled in Apollo’s snakes. The reptiles spoke to the children, giving them the ability of prophecy.

Later on, when she was older, Cassandra returned to the temple, and Apollo appeared to her. Like the first story, he tried to get her to accept his amorous advances, but she refused, making Apollo mad enough to curse her. 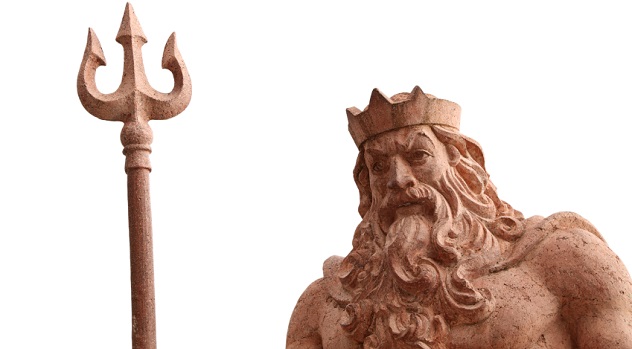 Asteria was the daughter of the Titans, Coeus and Phoebe, and she was also the goddess of nocturnal oracles and falling stars. She was married to another Titan named Perses, and together, they had a daughter named Hecate. (However, in other stories, Hecate is said to be the offspring of Nyx and Erebus, two primordial deities.)

Asteria’s parents, Coeus and Phoebe, were children of Uranus and Gaea, making Asteria the cousin of Zeus. Nevertheless, the god of thunder attempted to woo her, but she fled by turning into several different animals. She finally turned into a quail and fell into the Aegean Sea, which then transformed her into the island of Ortygia.

After the Zeus incident, Asteria was pursued by Poseidon, and this time, she escaped his clutches by transforming into the island of Delos. Interestingly, Asteria’s sister, Leto, eventually took refuge on Delos when pregnant with Zeus’s children, Apollo and Artemis. Clearly, if Zeus couldn’t have Asteria, he wanted someone related to her, which is pretty disgusting.

Poseidon and Demeter were both children of the deities Rhea and Cronus. After the Titanomachy, the war against the Titans, Poseidon attempted to sleep with his sister. She tried avoiding him by turning into a mare and then hiding on an island with a group of horses. However, Poseidon saw past that little scheme and transformed into a horse as well. He then raped his sister, and from this “union,” they had two children.

Believe it or not, one of their kids was actually a horse. His name was Arion (or Areion), an immortal animal that belonged to several heroes, including the legendary Hercules. Several other stories make varying claims about Arion’s parentage. Some say he descended from Poseidon alone, while others claim he came from Poseidon and a harpy, or possibly even the goddess Gaea.

Regardless, the whole reason Poseidon wanted to have Demeter was to “bring fertility to the Earth with his wet elements.” Talk about gross. 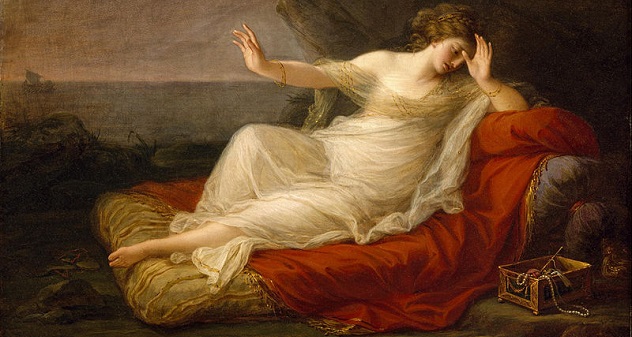 Ariadne was the daughter of Minos and Pasiphae, the king and queen of Crete. Eventually, Ariadne fell in love with Theseus, the Athenian hero who traveled to Crete with the intention of killing the child-hungry Minotaur. Ariadne aided Theseus on his journey by giving him a sword to slay the creature and some thread to track his way out of the Minotaur’s labyrinth.

Sadly, Theseus did not have romantic feelings for Ariadne, and he either left her on Crete or carried her off to the island of Naxos . . . where he abandoned her to die. In the first account, after Theseus just dumped her, Ariadne hung herself in her grief. In the latter version, Theseus dropped her off on Naxos (as depicted above), but she was rescued by Dionysus. She was so grateful that she even married the guy.

According to another story, she was already married to Dionysus when Theseus came to Crete, and she helped him on the condition that he would take her to Athens. Either way, she was in love with the hero, but he wasn’t interested. 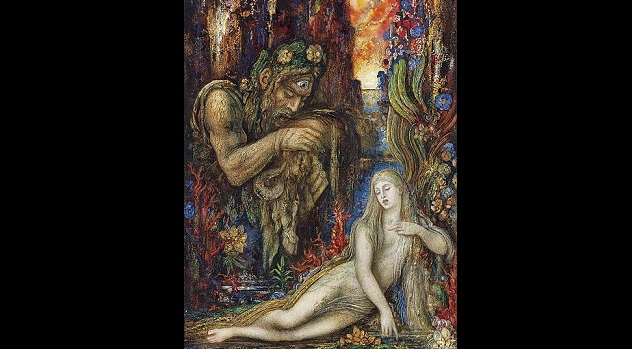 There is actually more than one Galatea in Greek mythology, but one of them was the love interest of a cyclops named Polyphemus. Polyphemus was the son of the god Poseidon and a nymph named Thoosa. As for Galatea’s parents, she was one of several daughters of Nereus and Doris, thus making her a “Nereid.”

When Polyphemus first started wooing Galatea, he gave her foods like cheese, milk, and fruit. Galatea, on the other hand, had her eye on someone more her speed. His name was Acis, and he was the son of Pan and a nymph named Symaethis. Acis and Galatea loved each other, but they could not escape the wrath of the cyclops.

One day, Polyphemus saw them together and began throwing boulders at the couple. Acis was crushed under one of the rocks, and as his blood started gushing, Galatea turned him into a spring. As for Polyphemus, well, he didn’t get the girl. However, he is pretty well-known for his role as the evil captor of Odysseus and his men in the Odyssey.

Brie Reynolds lives in a small town in Maine where she spends the majority of her time lazing about, rather than doing anything remotely productive. She basically describes herself as a “Greek mythology fanatic/couch potato.” She is currently rewriting an unpublished novel that she hopes will someday turn into a worldwide phenomenon. Other than that, she’s trying to find a stable job (and is not being very subtle about it).