In the scientific community, controversy is not only expected but welcomed. Many once-controversial theories, such as plate tectonics, have eventually been proven true, and it stands to reason that difficult discoveries are more easily reached through radical thinking. Besides, one never knows when new evidence will come along to bolster theories which were once seen as outside the mainstream. 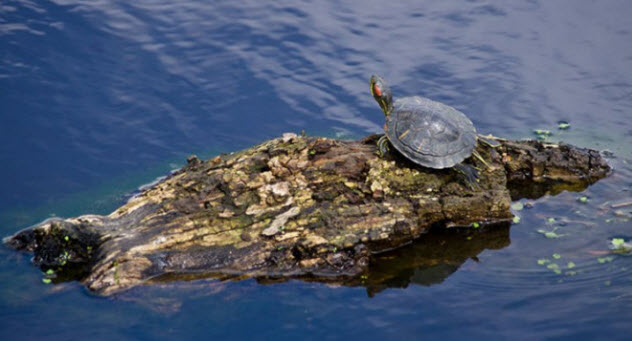 Darwin’s theory of evolution has engendered controversy since it was first introduced. While the overall concept of natural selection enjoys consensus scientific support today, some offshoot hypotheses have not fared as well—particularly the one Darwin used to explain how close biological relatives can evolve similarly when separated by vast oceans.

Darwin called it “jump dispersal.” It suggests that some organisms—from bacteria to insects to small animals—may have hitched rides across the oceans in various ways. These could include ice masses, seaweed and other vegetation, or bits of tundra.

However, a computer model designed to compare this theory with the more accepted one—migration by ancient land bridges—found that the jump dispersal model clobbered its competition in terms of statistical probability.

9 How Buckyballs Are Formed 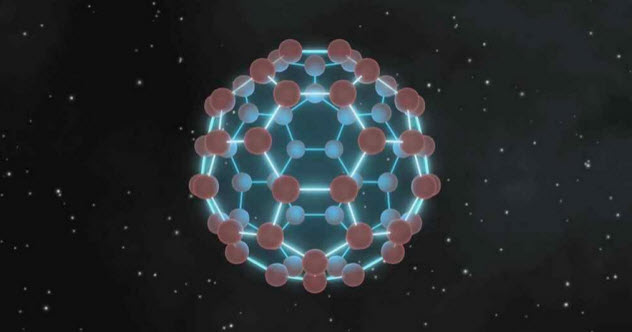 Fullerenes, commonly called “buckyballs,” are hollow carbon structures shaped like soccer balls. They form naturally at a molecular level. The more widely accepted “bottom up” theory says that they come together one atom at a time, like building a Lego model.

The more controversial “bottom down” theory suggests that they result from the breakdown of larger atomic structures. For the first time, the underdog theory has serious support in the form of newly discovered, asymmetrical versions of buckyballs that are indeed formed from larger structures and appear to be in mid-transition.

This is important because of the prevalence of buckyballs in current medical research. For example, radioactive ions encased in buckyballs have shown promise in targeting cancerous tissue without the associated damage to healthy tissue. The ability to mass-produce these tiny carbon cages could have a potentially explosive effect on multiple fields of medicine. 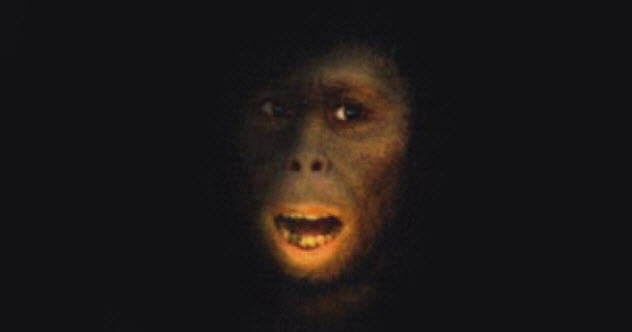 In 2005, anthropology professor Robert Sussman released his book Man The Hunted, which proposed that humankind evolved not as hunters but as prey, subsisting mostly on vegetation and only hunting when presented with an opportunity. The book raised a stir by challenging a very old paradigm of human development, but its theory is supported strongly by the fossil record and the behavior of modern animals and primates.

Evidence abounds, both circumstantially and scientifically. Human intelligence and cooperation may well have evolved to outwit predators. Also, fossil records indicate that human ancestors were short and flat-toothed, adapted more for foraging than hunting.

In addition, consumption of decomposing flesh and cannibalism are virtually unheard of in the primate world, suggesting that Sussman’s theory does not simply imply a predilection for scavenging rather than hunting. Sussman believes that the Judeo-Christian ideology of man as “a natural killer” caused the misconception. 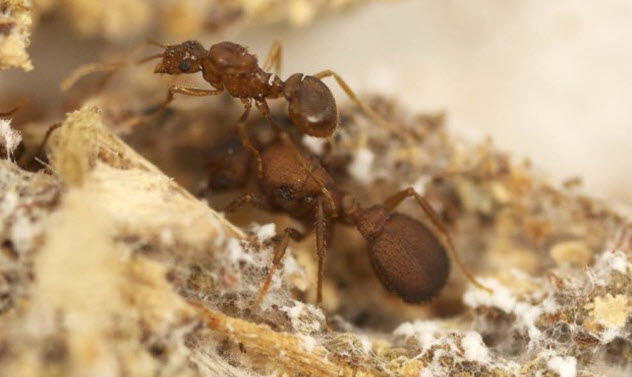 In modern thinking, a basic tenet of evolution is that there must be geographic separation for speciation to occur. Speciation is the branching of one species into two or more.

Although this has been debated for decades, the opposing view—that “sympatric speciation” can occur within the same geographic area—is a notoriously hard sell among evolutionary scientists. But the discovery of a new Brazilian ant species may prove once again that the prevailing view is not always the correct one.

Discovered on a college campus in Sao Paulo, the new ant is a sister species to a local fungus-farming ant. These new ants are smaller than the farmer ants, have developed wings, and simply eat the fungus that the other ants collect instead of helping to farm it. While not absolute proof, the German scientist responsible for the finding believes that it may constitute an example of speciation being observed as it is happening.

6 First Settlers Of The Americas 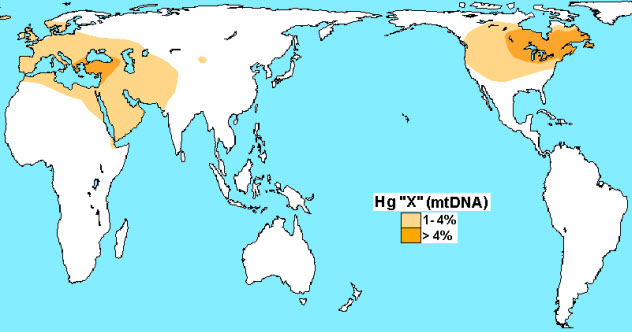 According to the conventional understanding of how the Americas came to be populated, a drop in the levels of the ancient seas was responsible for the uncovering of a “bridge,” an expanse of land that connected Asia and Alaska. These early settlers followed receding glaciers down into the Great Plains area and populated North America.

However, a recent archaeological discovery on the East Coast may seriously challenge this notion. Stone tools closely resembling those crafted by the Solutreans, Stone Age inhabitants of present-day Europe, were unearthed and dated to thousands of years before the hypothesized bridge migration.

The authors of the “Solutrean theory” suggest that European migrants, not Asian, followed polar ice as it expanded south during the Ice Age—all the way to North America. 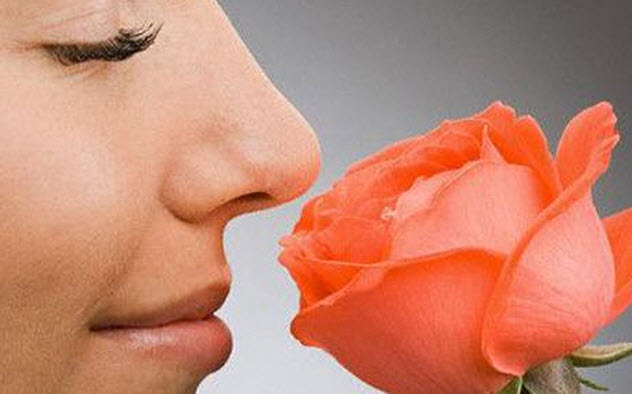 Photo credit: My Blog My Story

Greek fragrance chemist Luca Turin contends that the human olfactory sense can detect isotopes—that is, differences in molecular vibration. While a 2004 experiment involving acetophenone—a compound with eight hydrogen atoms and a sweet and fruity smell—produced negative results, Turin’s team had a little more success in a later experiment using a different compound.

Cyclopentadecanone has 28 exchangeable hydrogen molecules, and Turin’s team found that volunteers reported a shift in the smell when more than about half of them were rearranged. The molecular shift produced more of a burned or roasted odor.

It is the strongest evidence yet to support a theory that turns the olfactory sense from a physical mechanism to a quantum one, with smell receptors attuned not to a molecule’s shape but to its vibrational spectra—a phenomenon completely foreign to molecular biology. 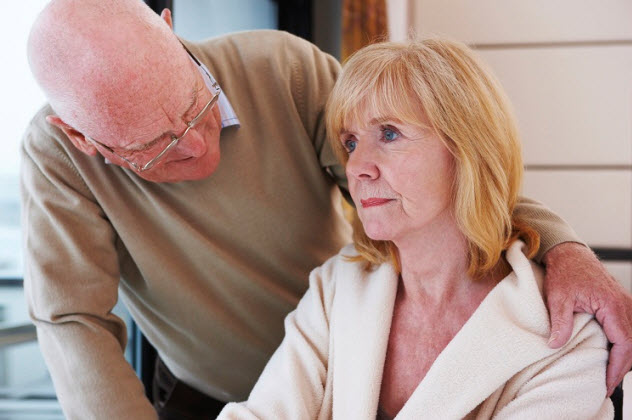 Alzheimer’s disease is strongly associated with the buildup of a certain type of protein in the brain. As such, it has long been theorized that it may be possible to transfer the disease by surgically transplanting tissue (but not through simple contact). Unfortunately, a recent study indicates that this is likely to be possible and underscores the need for more rigorous evaluation of transplant donors.

The study examined the brain tissue of eight patients who had died from Creutzfeldt-Jakob disease, which was known to have been transmitted through nerve-tissue grafts that the patients had received. Of the eight, seven were found to have a buildup of the Alzheimer’s-associated protein in their brains at the time of their deaths—despite some being as young as 28.

3 The Ocean Inside The Earth 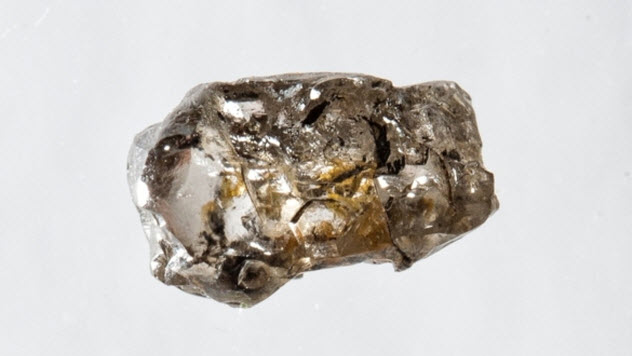 The discovery of a small piece of mineral called ringwoodite has all but confirmed a popular but once widely ridiculed theory—that there is an ocean beneath the surface of the Earth. The only other place natural ringwoodite has been found is in meteorites.

Studies have suggested that the mineral olivine becomes ringwoodite—which has been created in a lab—when subjected to the intense pressures of the Earth’s mantle. Water is 1.5 percent of ringwoodite’s composition in the form of hydroxide ions, which is the result of intense heat and pressure and a large amount of water.

The discovery of a natural sample proves not only that the theorized underground ocean exists but that its volume might rival the combined volume of all of Earth’s aboveground oceans. 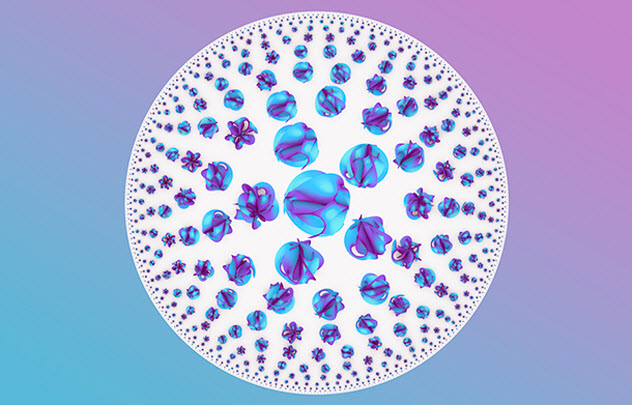 Endlessly debated since its inception in the 1980s, string theory is as close as theoretical physics has come to a unified “theory of everything.” It posits that all natural phenomena, including seemingly incompatible ones like gravity and quantum mechanics, arise from the vibrations of “strings,” which are infinitesimally small loops of pure energy.

A group of string theorists is seeking to prove the unprovable theory by exclusion. Using a sort of gravity-to–quantum mechanics translator, they have arrived at a set of “consistency conditions” that any unified theory must meet—that is, any theory that includes both quantum mechanics and gravity.

They found that the only quantum theories that produce Einstein’s model of gravity involve strings. Although there may never be any physical evidence for the correctness of string theory, proponents nevertheless claim that the absence of any alternatives means that string theory must be correct. 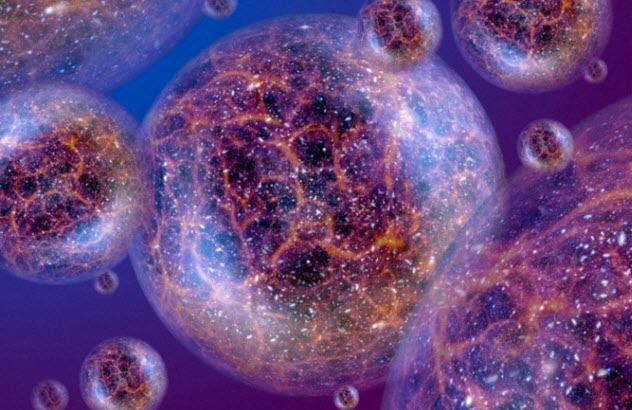 In 2014, the amazingly named Background Imaging of Cosmic Extragalactic Polarization 2 (BICEP2) South Pole experiment appeared to confirm the existence of gravitational waves by detecting incredibly minute ripples in space-time. Researchers then posited that if gravitational waves’ existence could be confirmed by additional study, it could prove the theory of cosmic inflation. This could constitute strong circumstantial evidence for the existence of the multiverse.

Almost every model of inflation—the gradual expansion of the universe—allows for it to become eternal and suggests that our observable universe is likely just one small pocket of a much larger space. Also, the big bang would not have been a unique event but could have happened repeatedly. The unique conditions that support life in our universe may have simply arisen given infinite chances. Infinite universes would form within the multiverse, many of which may have completely different physical laws.

Scientists at the Laser Interferometer Gravitational-Wave Observatory confirmed the existence of gravitational waves, as predicted by Einstein, in 2016.