Humans have been drinking alcohol for millennia. Anthropologists believe that alcohol may be the primary cause for the shift from hunter-gathering to agriculture. Whether it is used as social lubricant, medicine, or political currency, alcohol has been and continues to be one of the most important foods consumed by mankind. 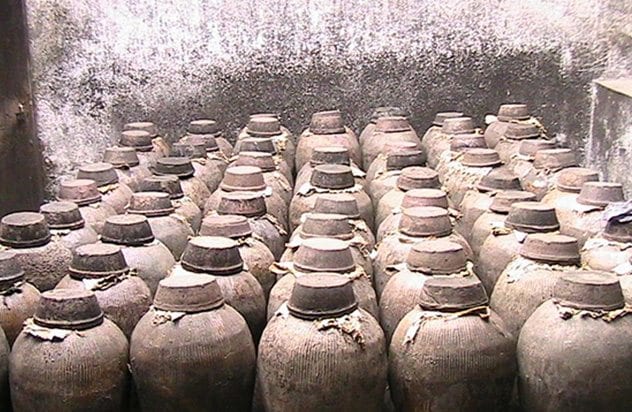 In China, archaeologists recently discovered the oldest evidence of alcohol consumption in the world. Chemical analysis of broken pottery revealed that Chinese were imbibing in 7,000 BC. Vessels examined showed evidence of the same type of beverage brewed from rice, honey, and fruit.

The Jihua pottery showed traces of tartrates—a chemical class associated with grapes and hawthorne trees. Honey, grapes, and hawthorne would have provided a brew with all the sugars and yeast required for fermentation. Since Jihua is home to the oldest pottery discovered in China, brewing tradition likely goes back even further. However, leather and wood containers, which may have once held ancient libations, would not survive into the modern era.

9Wines Of The Scorpion King 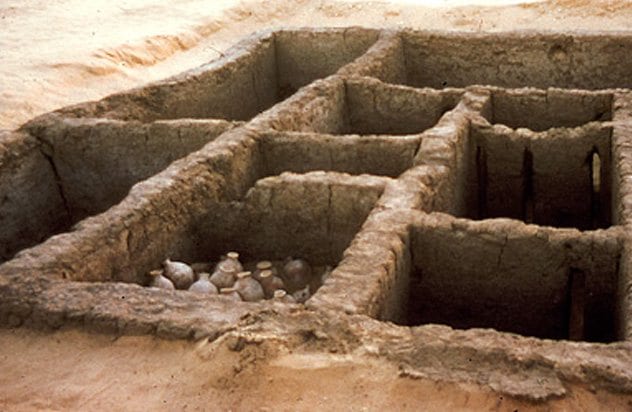 In the shadowy depths of the tomb of Pharaoh Scorpion I, archaeologists discovered Egypt’s oldest wine. The 5,000-year-old libations were infused with natural medicine. Researchers discovered tree resins and herbs like coriander, sage, and mint within the ancient alcohol. Some of the additives were for flavor, but many of them had curative properties. Alcohol breaks down plant alkaloids and provides a convenient delivery system for natural medicines. Archaeologists have known about Egyptian medicinal cocktails from papyrus dating to 1850 BC. These wines push the date back more than a millennium.

Scorpion’s wines are so old that they predate the advent of Egyptian vineyards. Instead, they were imported from the Jordan River valley. Medical mixology is not unique to Egypt. There is also evidence that the ancient Chinese practiced therapeutic brewing. 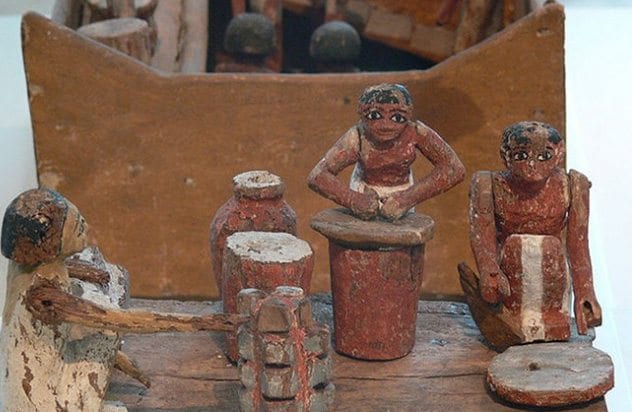 Archaeologists studying the bones of ancient Nubians made a shocking discovery. The skeletal remains were laced with the tetracycline. The researchers believe they ingested this ancient antibiotic through beer. They theorize the grain was contaminated with tetracycline-producing bacteria Streptomycedes. Ancient Nubians stored their brewing grain in mud containers, and Stretomycedes is a soil bacteria ubiquitous in arid climates.

More than 90 percent of the examined remains contain tetracycline. Even infants as young as 24 months have the antibiotic in their system. The ancient Nubians lived along the Nile River south of Egypt in modern-day Sudan. It is likely they inherited the tradition of medicinal brewing from their northern neighbors. The tetracycline beer may have prevented bone disease, as all the ancient Nubian remains are infection free. 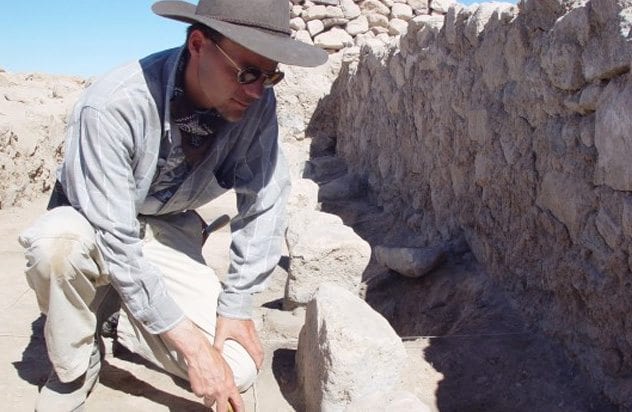 In 2004, a research team from Chicago’s Field Museum discovered an ancient brewery in the highlands of southern Peru. Elite members of the pre-Incan Wari culture brewed a corn beer known as chica on a massive scale more than 1,000 years ago. Based on several 15-gallon production vats found at the site, experts believe the Wari may have been able to produce thousands of liters of chica a day.

The brewing facility was discovered during the excavation of Cerro Baul. Nearly two miles above sea level, the site once held a population of about 2,000. Experts believe chica drinking was an instrumental part of Wari politics. Officials from far-flung regions of the empire were invited to Cerro Baul to partake in mass drinking festivities. Chica may have been powerful enough to unite diverse cultures without a common language. 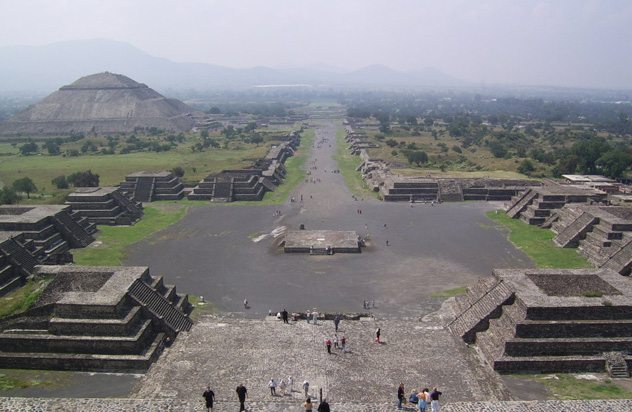 Archaeologists found evidence of a milky alcoholic drink on ancient pottery shards in Teotihuacan. Researchers believe the drink provided essential vitamins and minerals to the inhabitants of one of the largest settlements in prehistory. Shortfalls in staple foods occurred frequently in the ancient Mexican city. Murals in Teotihuacan reveal inhabitants drinking pulque, a milky alcohol derived from agave sap. Tequila is also made from agave, but unlike pulque, it is made from the plant’s roasted center.

Encompassing eight square miles and 100,000 inhabitants, Teotihuacan was the largest city in pre-Columbian America. Corn was the staple crop for its inhabitants. However, limited groundwater and low rainfall made growing the crop a risky proposition. What’s more, corn is low in several vital nutrients. Agave withstands drought and cold significantly better than corn. Pulque also would have been able to provide vital nutrition to Teotihuacan’s inhabitants—like iron, calcium, B vitamins, and probiotic bacteria. 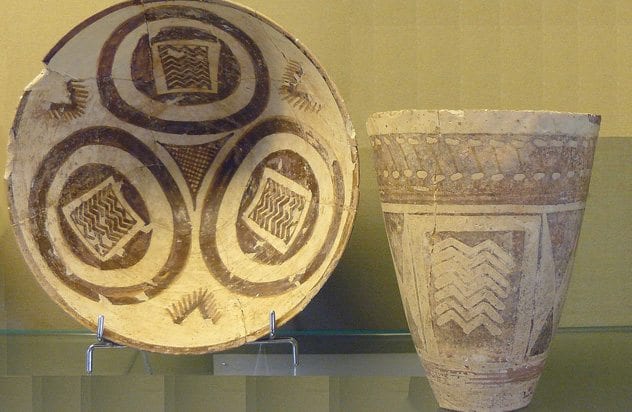 In 1992, archaeologists excavating the Sumerian trading post of Godin Tepe in the Zagros Mountains discovered beer from 3,500 BC. The presence of calcium oxalate suggests they were brewing barley beer. They also found this grain in nearby vessels. The abundance of storage jars suggest Godin Tepe was once a thriving trade city and military outpost on a route that would later become the Silk Road.

The Sumerians were one of the first people on earth to develop a complex, literate society financed through trade and irrigation agriculture. Beer was their favorite drink. Sumerian art often features gatherings around large bowls of beer consumed through long straws. The pictogram signifying beer is among the most common found in Sumerian ruins. 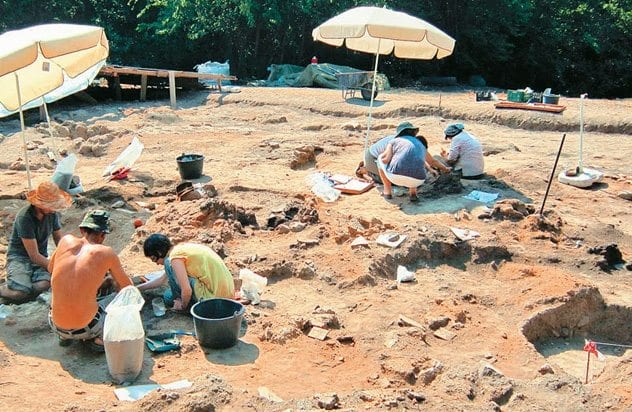 In 2013, archaeologists unearthed the oldest known European alcohol in Greece. The 6,200-year-old wine residue was discovered in ancient ceramics from the Dikili Tash prehistoric settlement. Analysis of the pottery revealed traces of tartaric acid—a byproduct of fermentation. The previously oldest known wine came from Armenia 6,100 years ago.

Little is known of the inhabitants of Dikili Tash. It was only in the latest excavations that archaeologists were able to penetrate the settlement’s deepest levels. Researchers are currently unaware how significant alcohol’s role was in shaping this prehistoric society. The same team that discovered the ancient wine residue may have also discovered even more ancient evidence of winemaking. While excavating a Neolithic house from 4,500 BC, they found carbonized grape pips with skins—a sure sign of grape pressing. 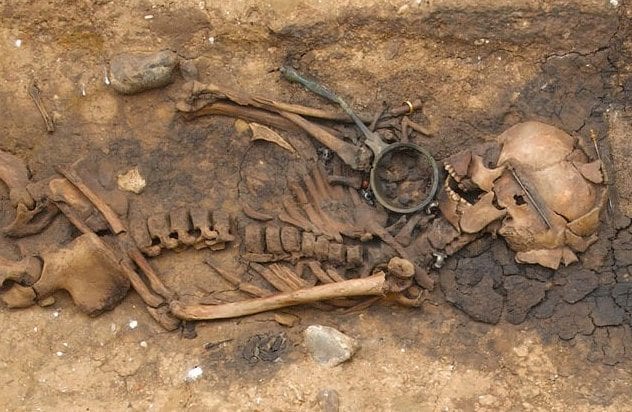 The find prompted researchers to analyze older Scandinavian finds with the latest technology. They discovered the oldest evidence of alcohol in a jar within a warrior’s grave. The jar contains only traces of honey, suggesting it once held unadulterated mead. In the 1920s, an ancient priestess dubbed “Egtved Girl” was discovered with a jar of grog at her feet. Wine kits, which were imported from southern Europe, are almost exclusively found in female graves. Researchers believe this indicates that Nordic women were responsible for brewing. 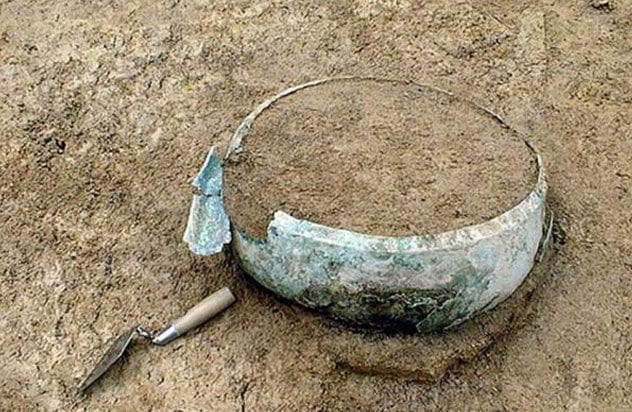 In an ancient Swabian burial plot, researchers discovered a bronze cauldron containing remnants of a 2,500-year-old brew. The vessel once held 14 liters of a beverage destined for the underworld. Archaeologists suspect that this was used so that the deceased could establish themselves as important in front of the gods. Analysis revealed the Iron Age brew was composed of barley, yeast, honey, meadowsweet, and mint.

No skeleton was found alongside the cauldron. Researchers believe the acidic soil likely dissolved all organic material. The grave goods of an iron sword, helmet, and two iron spears suggest the tomb belonged to a warrior of considerable prestige. The research into this ancient brew continued at Milwaukee’s Lakefront Brewery, where the brew master helped recreate the recipe. The resulting concoction was roughly 8 percent alcohol and resembled a dry port. Unfortunately, the results were not tasty enough for commercial release. 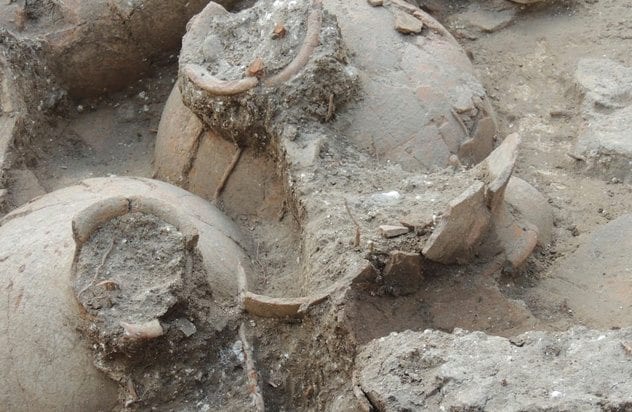 The oldest known wine cellar in the Middle East is located in present-day Israel. The storage facility held 40 massive pottery jars for storing intoxicating beverages. The storage facility was 16 feet by 26 feet and held up to 500 gallons of wine. Researchers believe these ancient vintages bore little resemblance to their modern counterparts. Many were preserved and spiced with resins and herbs like mint, myrtle, and juniper. The concoction would have resembled Greek retsina (resin wine) with cough syrup added.

The ancient wine cellar was discovered at Tel Kabri site in northern Israel. Dating to 1700 BC, the sprawling palace was occupied by the Canaanites, who once controlled Israel and Lebanon. Ancient texts have hinted at the presence of spiced, herbal wines, but none have ever been discovered—until now. A massive earthquake destroyed Tel Kabri around 1600 BC. The cataclysm crushed the cellar, burying it for millennia.