Your local gourmet gelato store will serve you up a delicious cone, a cup of double chocolate fudge, or if it’s really daring, goat milk lavender macchiato. The experience of ice cream itself is delightful but common and familiar. The ice cream’s texture is the same, the cone is the same, the process is the same.

But there are some great minds and cultures out there that see ice cream differently. From ancient snow recipes to new scientific innovations from culinary giants, these novel ice creams are undeniably fascinating. 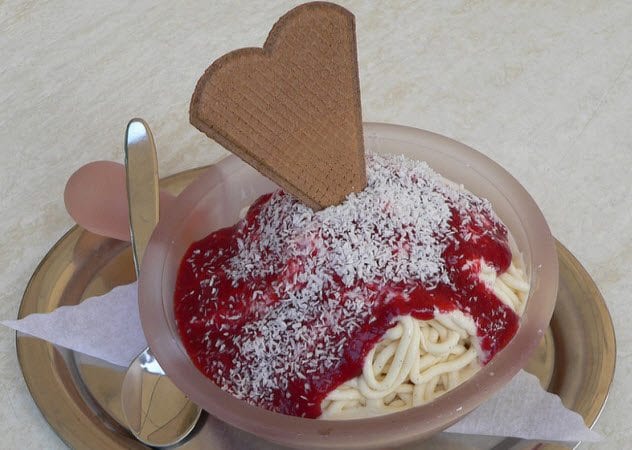 Dario Fontanella is an Italian German and third-generation ice cream restaurateur. He is also the proud creator of Spaghettieis, stranded ice cream.

In the 1960s, Fontanella was thinking about his Italian past and how he could apply it to the German culinary style. This gave him a curious urge to put vanilla ice cream into a meat grinder to see what would happen.

The result: stranded ice cream that has become wildly popular all over Germany, Fontanella’s home country. Spaghettieis is typically covered with strawberry sauce to resemble tomato sauce and grated white chocolate or coconut to mimic Parmesan.

It is served at only a few ice cream stores outside of mainland Europe, which is unfortunate because the change in texture and eating process is said to be satisfying and a must-try. 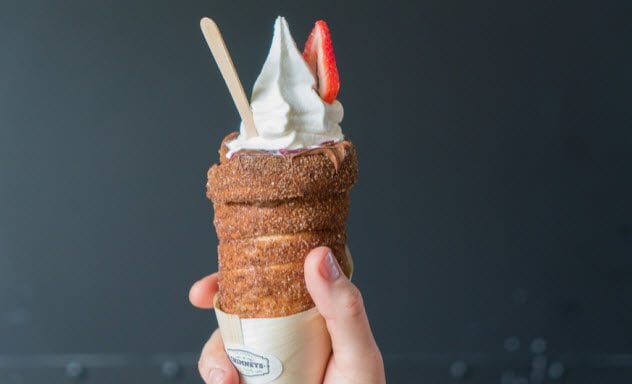 Where did the first ice cream cone come from? Why was it made of a waffle?

Here’s the story. Ernest A. Hamwi, a Syrian immigrant, was selling zalabia, a crispy, waffle-like dessert at the 1904 St. Louis World’s Fair. The popular ice cream booth next to him ran out of cups, and Ernest, noticing the dilemma, shaped his zalabia into a cone and offered it as an alternative cup. The rest is history.

However, the idea that an ice cream cone must be a waffle was narrow-minded. People started challenging the status quo.

The Cone Guys Company based in Pennsylvania has been selling pretzel-based cones since 1986. The salty flavor and crunchy texture complements a nice scoop of chocolate. The company also has chocolate cookie cones.

Another company challenging the waffle cone tradition is Chimneys, the Torontonian food truck. Their delicious doughnut cone is warm to the touch and has a light coating of sugar and cinnamon. Swirls of ice cream land right on a cone-shaped doughnut. Simply delectable! 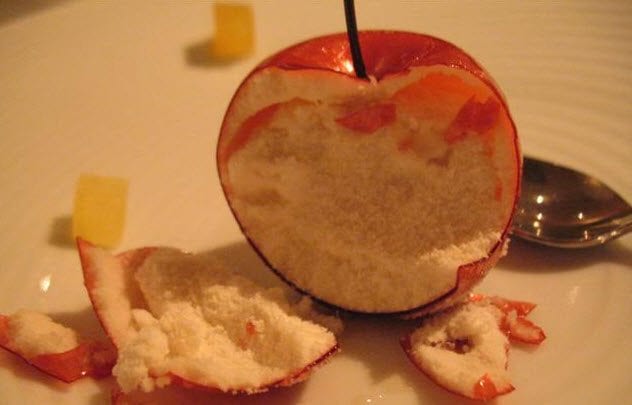 Most people can’t conceive of ice cream as anything beyond a frozen block of cream, but Seiji Yamamoto, the creator of powdered ice cream, has a new point of view. He is the leading molecular gastronome of Japan and owner of the 3-Michelin-star restaurant, RyuGin.

RyuGin’s signature dessert is the “Minus 196 Degrees Celsius Candy Apple.” It is a hollowed-out, hardened toffee apple filled with powdered apple ice cream. The ice cream is made by pumping nitrous oxide into an ice cream mixture to turn it into whip cream.

The ice cream is frozen in liquid nitrogen, and then all the brittle pieces are put into a food processor and chopped into powder. The final product is so fine that sneezing would wisp it away into a swirling cloud.

Considering that Yamamoto is a Michelin-star chef, it’s no surprise that the texture and taste are heavenly. 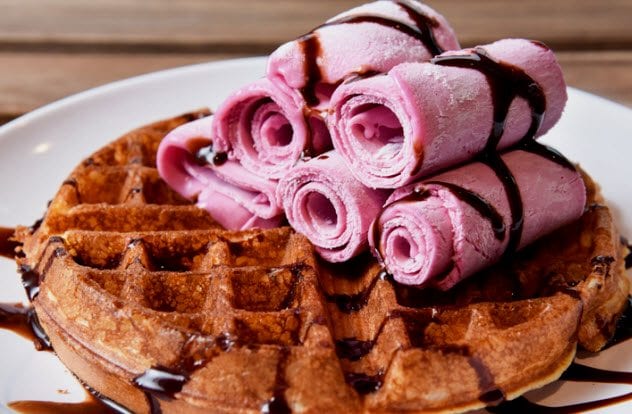 Stir-fried ice cream (aka ice cream rolls) is a delicious concoction that you eat with your hands like a taquito or chocolate cigar. It is made by pouring ice cream mix onto a below-freezing metal plate and then finely chopping fruit into the ice cream before it freezes.

The incredibly cold temperatures result in finer ice crystal structures and smoother ice cream. Unlike regular ice cream, each serving must be made on the spot. This creates a unique experience where you see your server make the ice cream in real time with the flavors you picked. You can mix in red bean, pomegranate, dragon fruit, and more.

Stir-fried ice cream is a common street vendor food in Thailand, but it is a new and novel creation for the Western world. New York City just opened its first stir-fried ice cream store, 10Below, in 2015. Hopefully, this treat will pick up more momentum because it is worth a try.

It produces finer, less grainy ice cream. Like stir-fried ice cream, the final product is made and customized on the spot. In addition, the liquid nitrogen turns into a gas and gives off an effect called dragon breath. You can blow fog out of your nose like a fire-breathing dragon.

Carbonated ice cream is another newer creation. Although no ice cream parlor is known to sell it, many chefs, including Cutthroat Kitchen’s Alton Brown, have ventured to make it. It is commonly made by mixing powdered dry ice into an ice cream mix. Like nitrogen ice cream, it has a finer texture. You can easily make it at home, and it also gives you dragon breath. 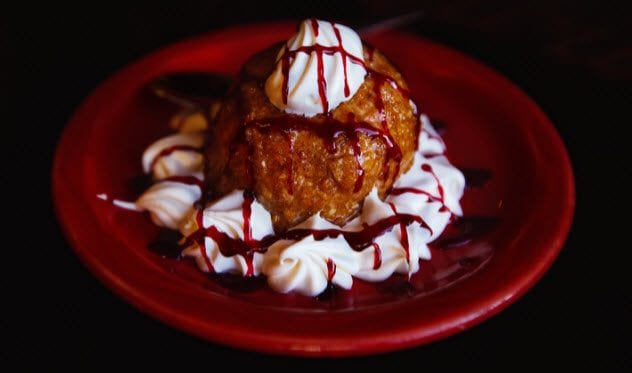 Fried ice cream has become a rare but sought-after novelty because it feels as though you are eating ice cream right out of the oven. Despite the name, the ice cream itself is not fried.

Instead, a ball of ice cream is frozen at a temperature that is well below zero. Then the ice cream is coated in batter or breadcrumbs. The ball is briefly fried in hot cooking oil. If done properly, the ice cream will stay frozen. The warm dough and pie-like aroma combined with the sweetness of ice cream is beyond words.

Another dough-surrounded treat is mochi ice cream. Mochi is sweetened rice that has been mashed into dough and then steamed. It is white, tastes mildly like marshmallow, and has the consistency of Play-Doh.

The mochi is wrapped around an ice cream ball to create an ice cream dumpling. The rice dough adds a lot of flavor and turns the ice cream into finger food. The treat has become trendy in parts of the US, resulting in a few mochi boutiques selling the confection in flavors of green tea, red bean, strawberry, and more. 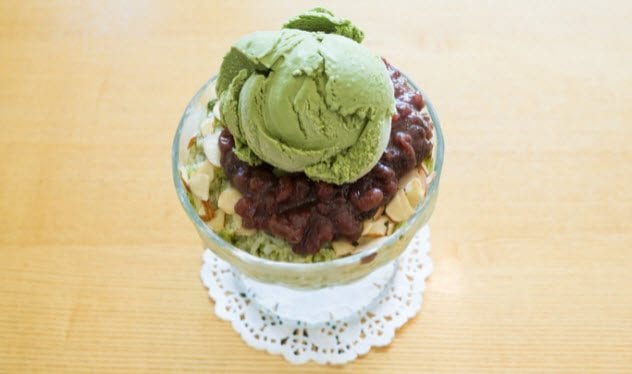 Patbingsu is a Korean dessert made by taking shaved ice and topping it with sweets, fruit, syrups, or a combination of the three. It is wildly popular in Asia and is sold in most fast-food restaurants and bakeries in Korea.

Snowdays is a New York–based ice cream store that has gained notoriety through its adaptation of patbingsu. The store takes a round brick of ice cream and shaves it into a cup using a professional ice shaver. This results in a stringy, layered texture (resembling pulled pork) that dissolves quickly in your mouth.

The store serves NY Cheesecake or Green Tea Matcha flavors, among others, in regular, large, or Yeti (huge) sizes. The concept has been promising. As of 2016, Snowdays has five stores and plans on expanding. 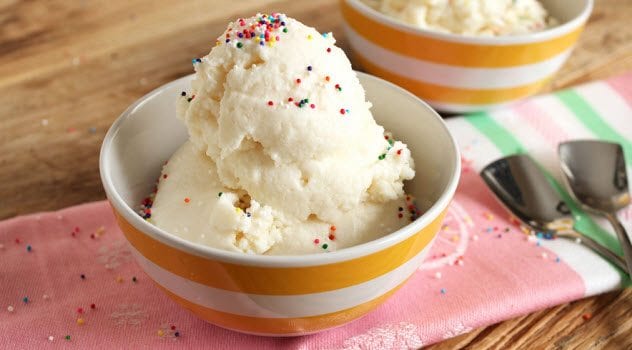 Alexander the Great was known to eat snow that was flavored with honey and nectar, and Nero of Rome often sent men into the mountains to fetch snow for his ice treats.

Flavored ice became the basis for ice cream. Today, few, if any, places use snow as the main ingredient in their frozen snacks, but there are modernized recipes that allow you to reach back into ice cream’s history.

According to the notorious Paula Dean, a bit of flavoring, some condensed milk, and a lot of snow is enough to make your own snow cream. There is something a bit romantic about eating the same food as the great kings and emperors of the past.

Maybe even add some clover honey for a bit of a floral taste that really gives the feeling that you’re eating nature’s gift. 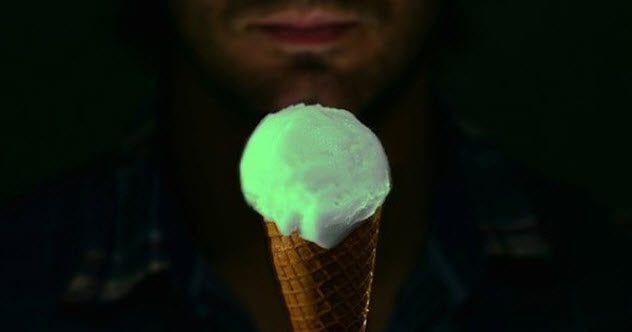 Lick Me I’m Delicious is a UK company that provides molecular gastronomy booths for corporate events that include liquid nitrogen ice cream and edible vapor. In 2013, the company created a new product with a glow that is sure to light up any social gathering.

The company partnered with Chinese biologists to make glow-in-the-dark ice cream. Unlike a glow stick, this ice cream does not dimly glow when the lights are off. Its special feature is that it starts glowing when you lick it and more brightly with each slurp.

The ice cream is made using bioluminescent jellyfish proteins that glow in the presence of the acid from saliva. Despite having the intense color of nuclear waste, the product is completely safe. But it will cost you a whopping $225 per cone because jellyfish proteins are expensive.

Dondurma is a Turkish ice cream that stretches like mozzarella cheese, sticks like toffee, and is commonly served in Turkey by street vendors. The concoction is so malleable that it cannot be served with a regular ice cream scooper. Instead, the vendors use special paddles that can chop up the ice cream into smaller pieces.

The secret to this ice cream’s magnificent stretchiness is salep orchid flour and mastic tree gum. Both ingredients come from Mediterranean plants that are expensive and difficult to cultivate, making dondurma a rare treat outside the Middle East.

If you ever go to Turkey, you’ll be in for a surprise. The vendors enjoy joking around with tourists when serving a cone. Some will juggle cones, and some will do sleight-of-hand tricks with the ice cream. It all results in quite good fun.

Brian is a full-time student who has a fascination for science and food. It always has irked him that there are so many brilliant culinary concoctions out there that few people know of. This writing is a way for him to open the minds of people everywhere that never knew of how different food can be.