Northwest of Ho Chi Minh City (Saigon), in the Cu Chi district, the remains of an intricate underground network tell the story of the human imperative to survive. Once spanning tens of thousands of miles, these extensive tunnels were dug by the Communist Viet Cong during the Vietnam War.

Used as secret hideouts, living spaces, and supply routes, the Cu Chi tunnels and surrounding area became the most aggressively targeted region by enemy forces. Here, relentless bombing, gassing, and soldier infiltration devastated the land and vegetation, forcing entire villages underground. In spite of their circumstances, the Viet Cong maintained land possession and defeated foreign intrusion with tactics that had never been seen before. 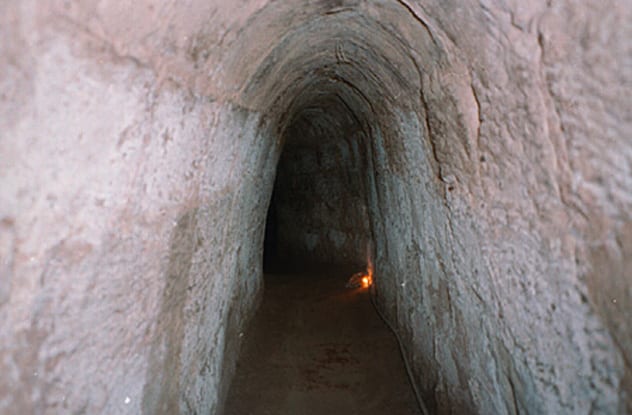 In the darkness of night, men and women of all ages dug the great network of tunnels by hand with little more than rudimentary tools. For digging in soft earth (post-wet season) the simple hoe could suffice, while crowbars took the brunt of hard ground and rock. Remarkably, soil and excavated material would be carried out of tunnels in bamboo baskets and plastic bags. All traces of digging had to be carefully dispersed to keep the tunnel sites covert. Bomb craters and rivers became dumping grounds in many locations.[1]

Though tunnel excavation originally took place close to the surface of the ground, over time, artillery and bombings forced the Viet Cong to dig deeper and deeper, 10 meters subsurface. Underground networks became more expansive and complex as hospitals, dorms, workshops, meeting rooms, kitchens, and bathrooms were needed. Ultimately, all necessary facets of village life could be found within the tunnels. 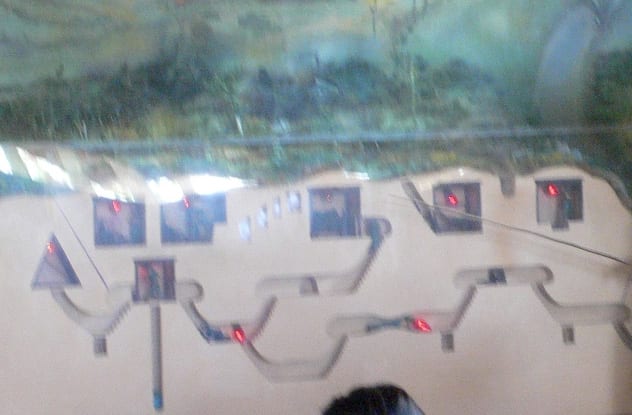 The tunnels were cleverly organized into four levels at varying depths. The first level, at three to four meters below ground, housed traps, ventilation shafts, and firing posts. Descending further to the second level, you would find kitchens and sleeping chambers. Withstanding mortar attacks at 6 to 7 meters subsurface, the third level gave way to aid stations, storage, and tunnel connections.[2]

At its amazing depth of eight to 10 meters, the fourth level tapped into the tunnel’s water sources. Water played a vital role in the survival of the Viet Cong living in the tunnels. Not only were wells dug to provide suitable drinking water, but also each tunnel led to the Saigon River. During low tide, the Viet Cong used this tunnel-river connection as a bathroom of sorts. This waterway also served, in emergency situations, as an escape route. 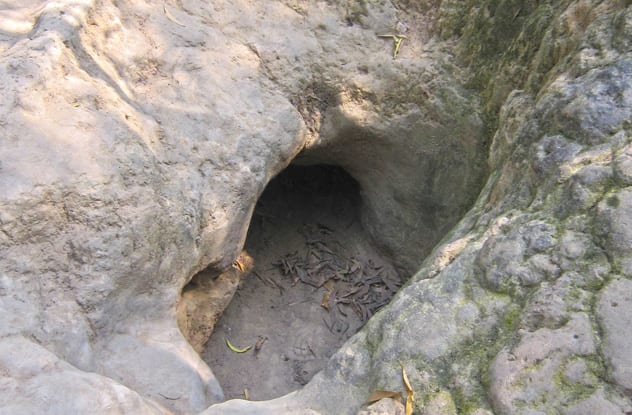 To survive the extreme lack of oxygen underground, Viet Cong forces channeled air through widely dispersed holes in the earth. With this technique, they accommodated thousands of soldiers within the underground layer.

Accounts from the Viet Cong soldiers describe scenarios in which they were forced to remain underground for weeks at a time. By lying on the tunnel floor and limiting breathing, precious air was rationed. During such times, ventilation became the most important factor in survival.[3] 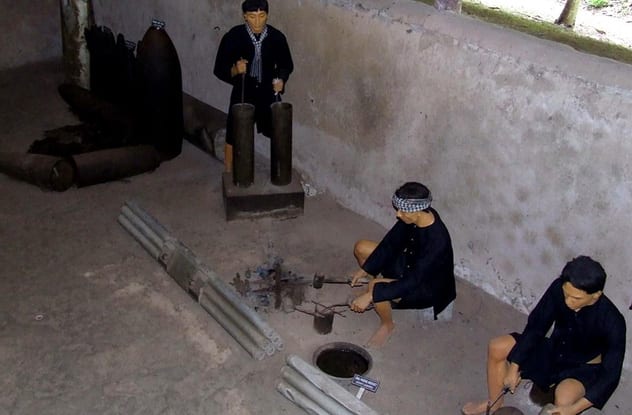 As with all components of their village life, surviving brutal tunnel conditions depended on a strong communal mentality. Withstanding dire food shortages, communities were sometimes left to eat stale rice, grass, and even drink their own urine.[4]

Women, children, and able persons of all ages were taught to contribute and fight in the tunnels. Yet, their lives weren’t only summarized by defense and combat. At times, bombs dropped overhead, while laughter permeated tunnel walls. Song, dance, and drama performers toured the tunnels, “a gun in one hand, guitar in the other.” Throughout the gloom of war, the Viet Cong managed to create moments of joy, uplifting village moral and fostering group solidarity. 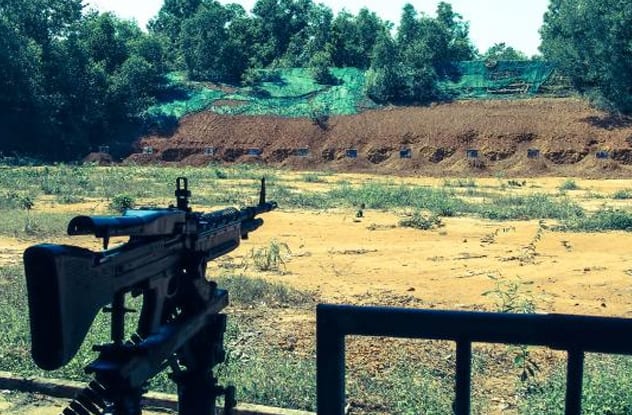 To overcome major disadvantages in their caliber of weaponry and technology, the Viet Cong diligently collected waste materials and supplies left by the Americans.

Detonated bombs were gathered for metal repurposing—the shrapnel was sold, and earnings were used to supply food to the tunnel dwellers. Detonators themselves were repaired and reused in combat.[5] Consequently, the Viet Cong ingeniously fought the American forces with their own weapons. 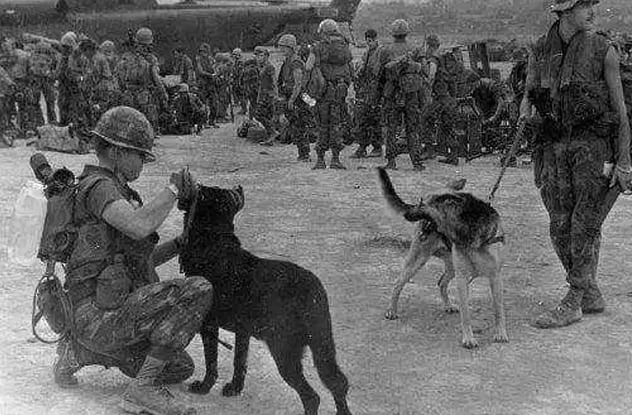 In addition to weapons, American soap, uniforms, and belongings were stolen and reused for the purpose of diverting American and German sniff dogs. Viet Cong soldiers placed these items in ventilation holes and surrounding entranceways to confuse war canines into thinking they were the traces of friendly American soldiers.

While allowing breathing air, small ventilation channels were also designed to disperse cooking smoke and burning firewood. Strategically hidden at the base of trees, within thick grasses, and even in termite nests, these holes were very difficult to detect.[6] 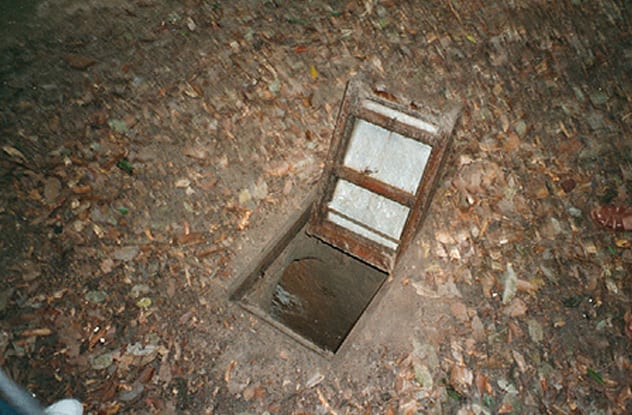 To surprise American soldiers from the rear, Viet Cong fighters would spot Allied troops passing one location then creep up and attack from a closer passageway. American soldiers were often tricked by the Viet Cong’s gunshots, which seemed to be coming from the edge of forests. In actuality, the shots were emerging from secret entrances, deep within the brush.[7]

These hidden entrance ways also allowed Viet Cong soldiers to quickly vanish belowground to safety when under attack. During the night, the Viet Cong would even sneak out of various tunnels that surrounded American bases, stealing ammunition, weapons, and food. 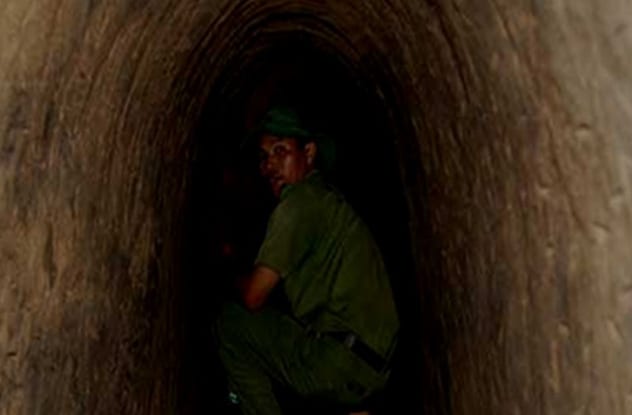 Body size became a key advantage for the slender Viet Cong, who could slip easefully underground through their tiny entranceways and tunnel walls. Wide-bodied Americans would invariably get stuck in these tight enclosures. Over time, smaller-bodied “Tunnel Rats” were trained within the American forces, to follow the Viet Cong into their tunnels. But, outsmarted once again, Tunnel Rats were then met with a series of U-turns and narrow twists in which they quickly became disoriented.

The tunnel walls were even so narrow that the long M1 American rifles would become lodged, trapping the American soldier or forcing him to retreat with his rifle firing in the wrong direction.[8] 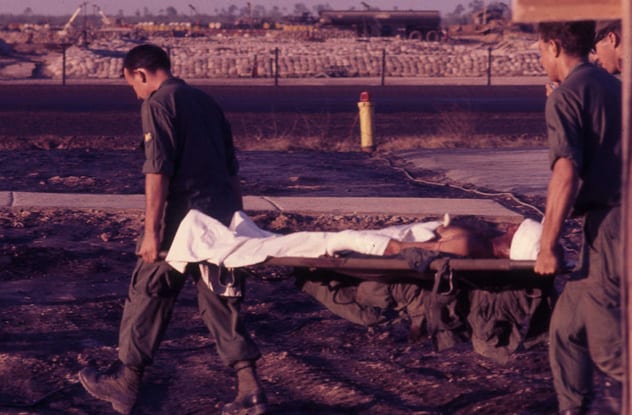 Overcoming major supply shortages underground, subsurface hospitals resourcefully fashioned blood infusions with bicycle pumps and empty bottles. With such devices, a patient’s own blood was bottle-collected then reintroduced into the body using the pump and a rubber hose. Such rudimentary aid stations were operated by torchlight, fashioned out of repurposed shrapnel.

While pharmaceutical medicine was purchased on the black market, herbal remedies and acupuncture were also commonly administered.[9] 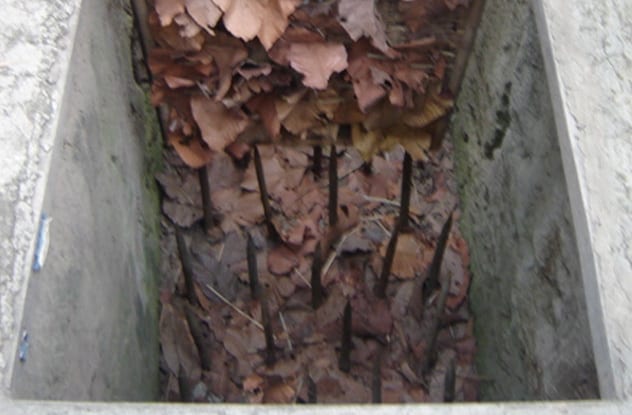 Positioned at ground level and within the tunnels, “Punji traps” are the most iconic booby-traps used by the Viet Cong. Harvested from their native forests, durable bamboo sticks sharpened like arrow heads were staked, sharp end up, in crude dugouts. They were camouflaged to look like the forest floor, and unsuspecting enemy soldiers would misstep and fall to their bloody doom.[10]

Other Punji traps were not necessarily aimed to kill but rather to slow enemy troops, sometimes to a halt. Here, the sides of a dugout held bamboo stakes pointing in a downward angle. A soldier accidentally stepping into a pit would become pinned by the leg and require comrades to tend to the situation.

Smeared in a concoction of poisonous plants, frog innards, and even feces, these bamboo punji sticks could cause severe infection in the victim soldier.