In some cases, these visions have already been realized. It’s likely that others will be facts, not mere dreams, in the near future. Our world is being transformed across the board due to a variety of factors, including technology, science, social planning, politics, and the motive of businesses to increase their profits. Is Eden just around the corner? Some of us might think so after acquainting ourselves with these 10 futuristic visions of everyday places. 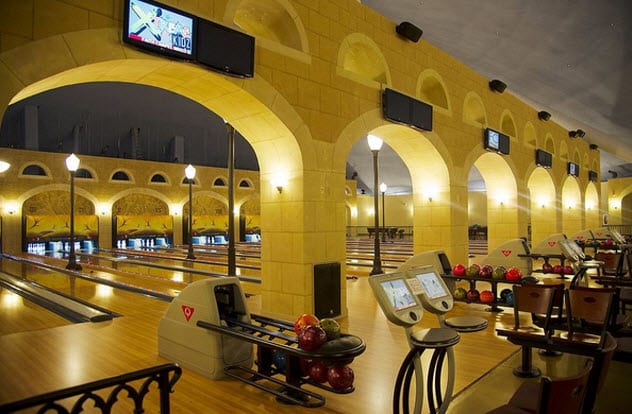 The futuristic Faith Chapel Christian Center in Wylam, Alabama, includes a 12-lane bowling alley as part of an interconnected recreation complex consisting of six huge domes known as The Bridge. As part of the church’s community outreach program, the recreation center—which also houses a basketball court, fitness center, climbing tower, cafe, banquet hall, and playground—is intended to provide family entertainment for both members of the congregation and nonmembers.[1]

The sanctuary, which seats 3,000, is housed in the church’s seventh dome, the Word Dome. Like the others, this dome was constructed by spraying concrete over giant inflated balloons. The $15 million cost of the church’s facilities has been borne entirely by the donations of church members. 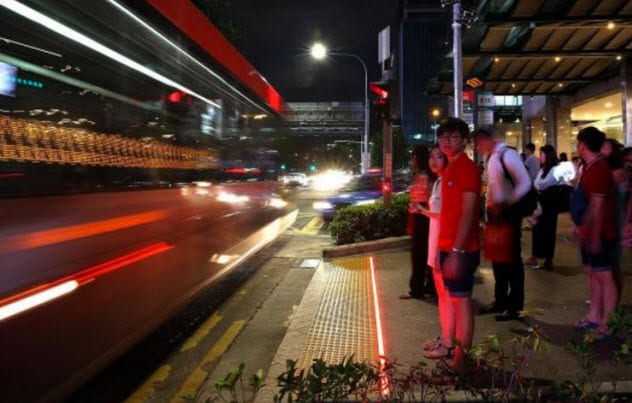 Between the solid green signal and the solid red signal, the strip blinks green, warning pedestrians that the light is about to change from green to red. The LED lights operate in conjunction with traditional pedestrian traffic lights.[2]

The Singaporean Land Transport Authority is testing the strips for six months, 24 hours a day, to determine whether their use can reduce pedestrian fatalities. The test strips are located in areas of the city in which there is high foot traffic. 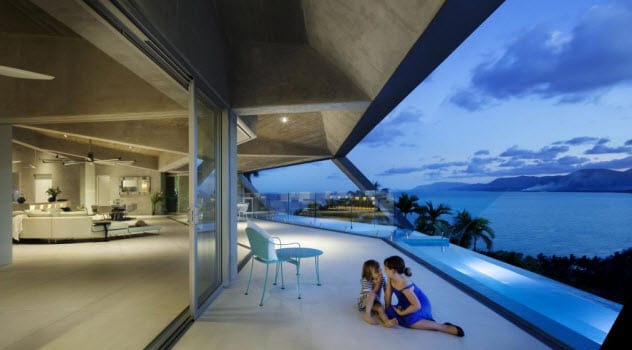 Futuristic homes will match lighting to residents’ moods, generate electricity, and advise homeowners to exercise. Such homes may be available as soon as a few years from now.

They’re part of an architectural trend intended to accommodate a variety of consumer lifestyles. Today, home buyers are interested in houses that provide more financial and personal options than those available in the past. Accordingly, banks and builders will offer an array of new features, including “flexible floor plans, sliding walls, mechanical ceilings, and robotic furniture.”

Monitors will keep track of residents’ respiration and exercise, reminding them to work out. Houses will be equipped with “self-sufficient ecosystems” and waste disposal systems. They will recycle water for gardening use. Furniture will serve more than one purpose, with benches converting into desks and coffee tables doubling as digital screens.[3]

Society is changing. The definition and composition of family is more diverse, the population is increasingly multicultural and aging, and more people are working from home. To meet the needs of these changing demographics, the new housing market will become more fluid and adaptable. 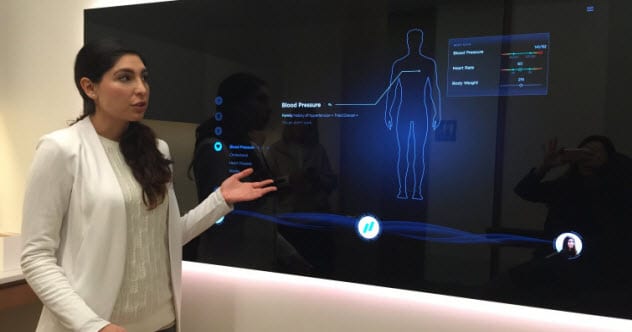 Futuristic doctors’ offices will be nothing like those we’re used to visiting. Almost everything will be digitized and electronic, as medicine seeks to prevent, rather than cure, health problems.

Prior to a visit, the patient uses a computer application (app) to schedule an appointment.

During the visit, the patient signs in, using an iPad built into a console. The computer responds by providing a list of the tests, examinations, and consultations the patient and doctor will be involved in.

Next, the patient steps onto a scale and slides two fingers into a reader. A body scanner automatically detects and records the patient’s vital statistics. The data is kept in a log to provide a picture of the patient’s general health over a period of time. The patient can access the data at any time on an app.[4]

Then, in the examining room, the patient changes into attire resembling a gym suit before reviewing an individualized health plan with the doctor. This includes lab test results, current health status, and progress toward goals—all viewable on a big screen mounted on the wall as the physician makes recommendations. Should blood need to be drawn, a handheld light shows exactly where to insert the needle, preventing multiple probes to find the vein. 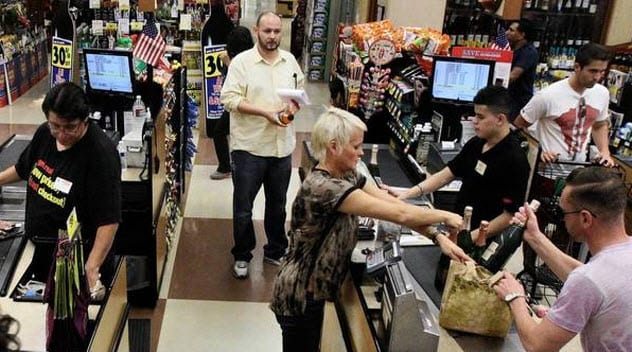 Grocery stores, such as Ralph’s, are going high-tech. To allocate personnel resources like cashiers, the chain is using infrared cameras to detect customers’ body heat and determine how many shoppers are there at particular times of the day. Using this information, managers can schedule employees to better serve their patrons, reducing waiting time and improving customer satisfaction.

Digital signs update shoppers on product locations and prices, and self-propelled shopping carts will follow customers or even direct shoppers to product locations. Customers can use a smartphone app to share their shopping lists with the carts and to notify the carts of dietary restrictions. At checkouts, shoppers have the option of paying with fingerprint scanners or using a smartphone app to scan their products’ bar codes.[5]

In Seoul, a grocery chain has dispensed with groceries altogether. Instead, interactive walls show photos of food products. Customers use their smartphones to take pictures of Quick Response codes printed on the photos, purchasing the items directly through their phones. Same-day delivery follows.

Another alternative, which is being explored by a British chain, uses a tunnel to move purchases through a 360-degree laser scanner that reads the products’ bar codes. 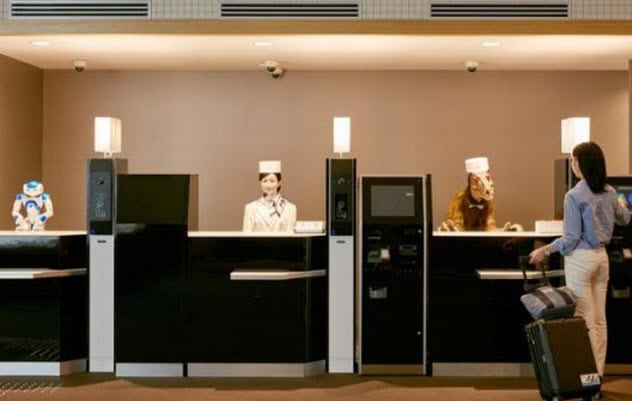 Kokoro modeled the robots’ looks and gestures on those of young Japanese women. These mechanical servants are attuned to guests’ tone and body language. The robots can make eye contact, blink, and breathe. They’re also multilingual, speaking Japanese, Chinese, Korean, and English. The robots are supported in their duties by a few human employees.[6] 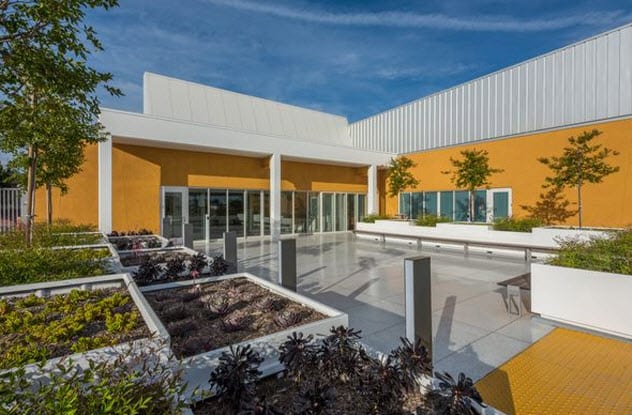 Futuristic designs for a Los Angeles metropolitan police station seek to improve and promote community relations. Instead of a bunker as their model, architects envision a two-story building for the 2,600-square-meter (28,000 ft2) facility. The grounds will include a pocket park and an art wall to celebrate neighborhood diversity.

The design will also be open and inviting. While respecting the privacy of the police and their prisoners, the station will feature transparent and translucent glass walls that admit sunlight and allow community residents to view the station’s interior.

The physical transparency is intended to be a metaphor for government and political transparency. The station is also meant to reflect the emphasis on foot patrols, a shift currently underway from previous squad car patrols. Inside, the design will encourage quick interactions among officers.[7]

Other architects envision the transformation of police stations into community centers equipped with meeting rooms, free Wi-Fi, and computer labs, all available to the public. This concept is being tested in Chicago and New York City. The plans meet the 2015 Task Force on 21st Century Policing guidelines, which encourage greater trust and interaction between police officers and the communities they serve. 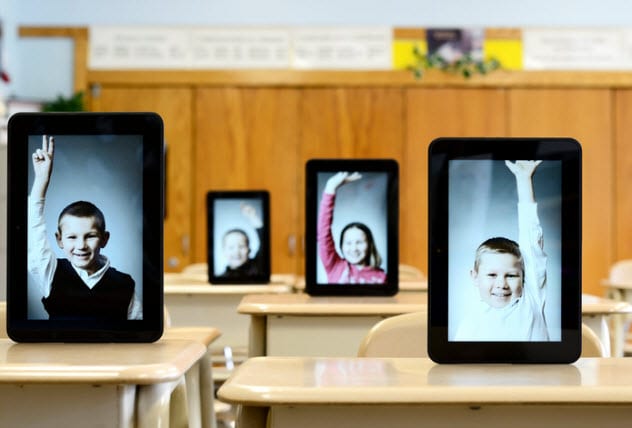 Within a decade, Monash University’s Professor Neil Selwyn predicts that US schools as we know them today will cease to exist. From K-12 through college, there will be no textbooks, computers, laptops, or written exams—and maybe no students—in classrooms. Libraries won’t have books in print.

Instead, books will be replaced by digital editions, just as smartphones, tablets, and “fablets” (large smartphones capable of performing many computer functions) will replace personal computers and laptops. Exams will be provided online, and the Internet may largely replace brick-and-mortar educational facilities as virtual classrooms become the norm.

Further down the road, Selwyn says, a bionic eye capable of manipulating the brain’s visual cortex could result in “an external cognitive hard drive you could plug into your brain.” This would provide an interface between your brain and metacognition technology.

To some extent, teachers might be replaced by robots, as has already happened somewhat in Japan. During field trips to a forest, students could learn about vegetation directly from trees and plants as students’ handheld communicators interface with microchips embedded in the flora.[8]

Selwyn doesn’t count out traditional education and its institutions for good, though. It may be that “old-fashioned schooling will make a comeback in 30 years,” he concedes, “with school becoming an oasis to get away from the digital age, a place where you can go and slow down and talk to people.” 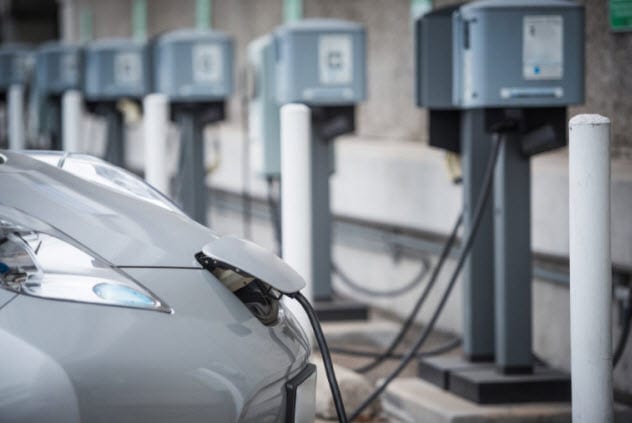 Futurists envision self-driving, hybrid, and electric cars being serviced side by side in gas stations. No service attendants need apply. Customers themselves can fuel their vehicles with compressed gas or electricity, pay with a phone app or credit card, and be on their way. If gas stations are to survive electric cars and driverless autos, they need to begin installing the equipment needed to refuel such vehicles.

John Paul of AAA Northeast estimates that gas stations have at least five years to adapt to the changing automobile market. Presently, electric cars make up only about 10 percent of the total number of vehicles. They aren’t likely to increase in sales until their manufacturers increase the mileage they can get out of a battery charge and charging stations become prevalent.

Self-driving cars have a long road of regulations to navigate. If gas stations change to serve the demands of the automotive industry’s emerging technology and future products, it’s likely that service stations will avoid extinction.[9] 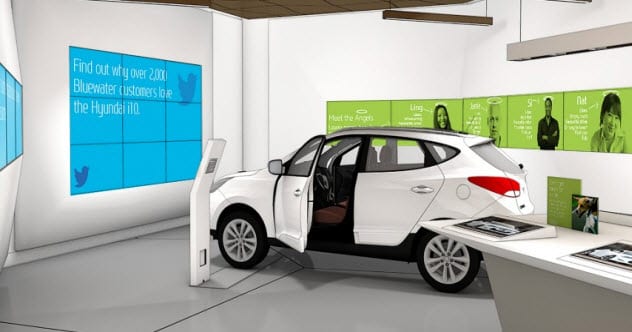 If Hyundai dealership owner Simon Dixon has anything to say about it, buying a car is apt to be a lot different in the near future. The company has opened the first customer-centered digital dealership in the Bluewater Shopping Center in Stone, Kent, England.

Customers don’t haggle with salespeople because there are none. Instead, customers complete their transactions using iPads placed about the showroom. If they need assistance from a person, “Product Angels” hover nearby. But they are only there to inform, never to sell.

What about test drives? Customers can take the cars for a spin without a salesperson in the car with them because the autos are equipped with tracking devices. Automotive repair service is available at the dealership as well. Customers leave their vehicles to be serviced in an area of the shopping center, and they’re driven to the repair facility 0.8 kilometers (0.5 mi) away.

Customers who prefer to buy their cars online may do so. The dealership offers a website for this purpose. Dixon hopes that his approach will become the standard way of selling cars in the future.[10]