Space can appear to be peaceful, a silent harmony filled with beautiful telescopic images of galaxies and rainbow nebulae. In reality, however, space is so weird and violent that it continues to astonish—and creep out—even the most experienced scientists. Some violent events are predicted to happen fairly close to home and may even occur while humanity still exists. 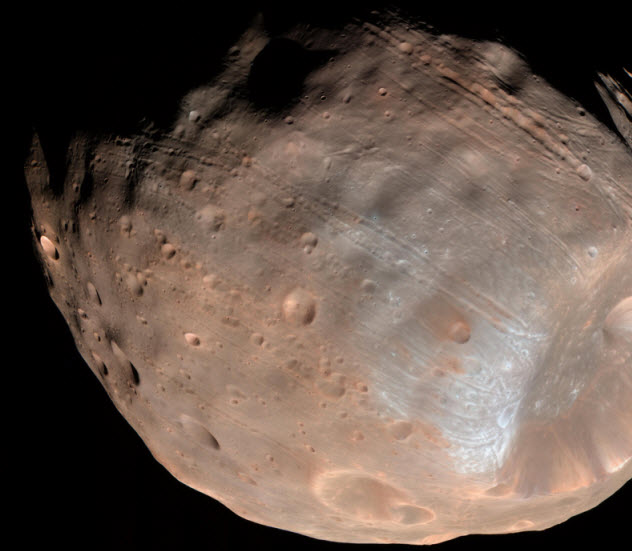 New research has determined that Mars might one day kill its nearest moon, Phobos. Just 22 kilometers (14 mi) wide, Phobos is one of two moons orbiting the planet. With every passing century, the orbit of Phobos shrinks and brings it closer to Mars by 2 meters (7 ft).

Ultimately, this moon will break apart from tidal stresses caused by the red planet, although the process could take up to 40 million years. In the end, Mars will be short one moon but have a Saturn-like ring to take its place.

Over the next few million years, pieces of the doomed moon will rain down on the equatorial region of Mars. This could pose a problem for any of our bases in the area—assuming that the human race is still alive then.

But the event firmly holds the interest of scientists today. Phobos is a unique moon in our solar system. It belongs to a group of moons that self-destruct because they migrate too close to their planets.

Phobos is the last one in existence. Its fatal destiny can give researchers valuable information about the early solar system and the deaths of the other moons. 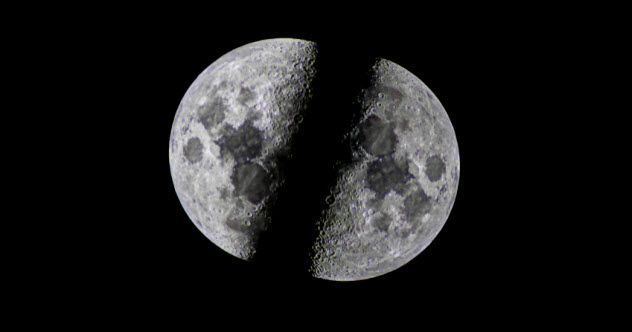 In the distant future, our Moon is also predicted to become a ring around Earth. Luckily for lunar lovers and werewolves the world over, this won’t happen for another five billion years.

Unlike the situation with Phobos, the culprit responsible for our Moon’s destruction is not the planet that it orbits but the flaming ball at the heart of our solar system. Although the Sun is currently stable, it will one day enter its red giant phase, a solar event that will most likely tear the Moon apart.

The Moon is presently moving away from Earth by 4.0 centimeters (1.5 in) per year. But when the Sun swells during its red giant phase, its atmosphere will push the Moon so close to Earth that tidal forces will rip the Moon apart.

A ring of lunar debris—approximately 37,000 kilometers (23,000 mi) in diameter—will encircle the Earth like a ring of Saturn. Similar to Phobos, the ring will eventually disappear as the lunar debris rains down on Earth.

The Milky Way is destined to smash into a neighboring galaxy called Andromeda. The consequences for both galaxies will be fatal, meaning that the Milky Way as we know it only has about four billion years left.

Gravity is drawing the Milky Way and Andromeda toward each other at the dizzying pace of 402,000 kilometers per hour (250,000 mph). When the two spiral galaxies collide, they will give birth to a new galaxy.

The collision will be a spectacular cosmic event that will last an incredible one billion years. During that phase, the galaxies will go through the motions of coming together, pulling away, and once again embracing each other in a yo-yo dance until the union is complete.

Despite all the stars in these galaxies, researchers believe that any collisions of the stars are highly unlikely. In that sense, the birth of the new galaxy—dubbed “Milkomeda” by astronomers—won’t kill off Earth or even our solar system.

However, the Sun will be so hot that the oceans will have boiled away by then. Milkomeda will be a reddish elliptical galaxy. Earth will reside on the outskirts of Milkomeda with the rest of our solar system. 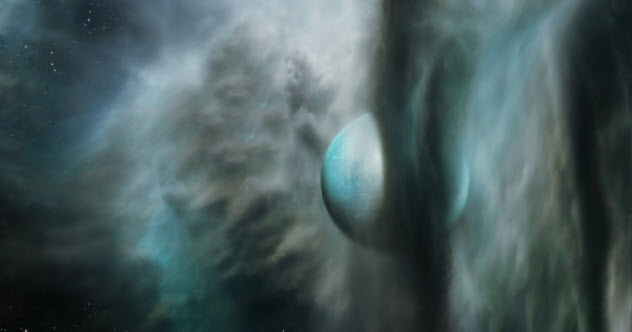 When researchers ran simulations, they discovered that our solar system might eventually hit a deadly space fog. The tiny specks may be lethal to all life on Earth.

When this killer cloud of dust and gas arrives, there won’t be much fanfare. It won’t block out the Sun or roll toward the solar system with an ominous black thunder.

The danger lies in its denseness. At least 1,000 times heavier than anything that Earth is orbiting through now, this cloud can act like a physical force, pushing back the Sun’s protective heliosphere that shields us from space nasties like cosmic rays.

When the cloud meets Earth, the dust and gas can erode the oxygen in our atmosphere. Cosmic rays will zap the world, endangering all living things with a deadly radiation.

This disaster is one of the closest to us from a time standpoint. According to scientists, it’s less than four light-years away. In cosmic terms, that’s a mere tick of the clock. But in human years, this corrosive cloud is still a few millennia away.

On September 1, 1859, an amateur astronomer named Richard Carrington detected the worst solar storm in history. Called the Carrington Event, it hurled a coronal mass ejection (CME) at Earth in what proved to be a direct hit.

Back then, the only damage was to telegraph systems. But in modern society, a repeat of the Carrington Event would introduce mankind to an unprecedented disaster. The power grid would likely fry, and millions of homes and businesses would lose power. Damaged electrical systems and transformers could take months to repair or replace.

Financial recovery could take years. Storage of food and medicine would become extremely difficult. All electrical services, including communication, would be affected or even completely shut down.

Frighteningly, there have been a few near misses. In 2012, Earth missed a catastrophe by about one week when a CME that surpassed the power of the Carrington Event just missed our planet. Had the solar storm occurred earlier, scientists believe that the damage would still be hampering society today.

Modern society is in an especially vulnerable position because we depend so greatly on electricity. CMEs can’t be deflected or even noticed until about one hour before they hit.

Solar scientists counted 15,000 CMEs between 1996 and 2010. They believe that it’s only a matter of time—possibly within the next decade—before a CME as big as the Carrington Event zaps the Earth.

A huge cluster of comets called the Oort cloud forms a “bubble” around our Sun. If a star should move through the Oort cloud or simply get close enough for the star’s gravitational force to affect objects in the Oort cloud, the dislodged objects could fall into the inner solar system and possibly wreak havoc among the planets.

Scientists have now identified several such “death stars” homing in on the Oort cloud. The most dangerous one, an orange dwarf called HIP-85605, has a 90 percent chance of plowing through the Oort cloud. Luckily, its arrival is still over 240,000 years off.

Gliese 710, another star with the same odds, will be in the neighborhood in one millennium or so. Even better, 12 more stars will buzz our solar system in a similar fashion in the next two million years.

The chances of a collision between an Oort object and Earth is small but not impossible. There are two impact craters on Earth that can probably be linked to the star HIP103738, which passed close to the Sun almost four million years ago. 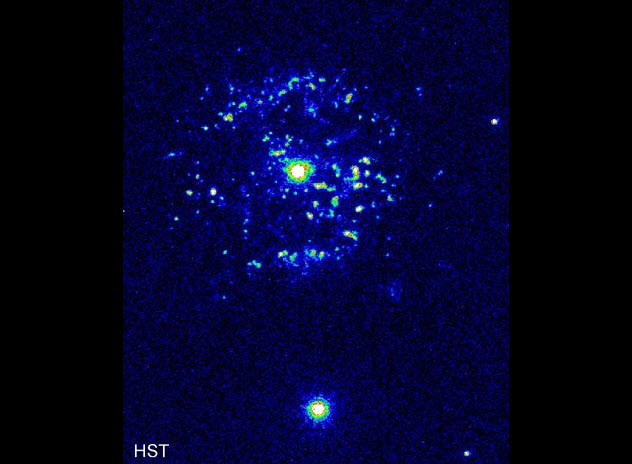 About 3,260 light-years away from our solar system—which is close in cosmic terms—a binary star system called T Pyxidis contains a Sunlike star and a white dwarf that have a parasitic relationship.

The white dwarf is a volatile parasite that consumes hydrogen-rich gas off its companion and erupts with thermonuclear blasts every 20 years as a result. In terms of danger to Earth, these explosions are like popping bubble wrap.

The real problem will occur when the white dwarf goes supernova after accumulating too much mass from its neighbor. The explosion will be of such epic proportions that it will kill the white dwarf and endanger Earth with the energy of 1,000 solar flares. It may even destroy Earth’s ozone layer after gamma rays cause nitrous oxides to build up in our atmosphere.

Researchers estimate that the dwarf star’s violent death will occur about 10 million years from now. However, if the white dwarf accrues mass at a faster rate than currently calculated, the explosion could happen sooner. 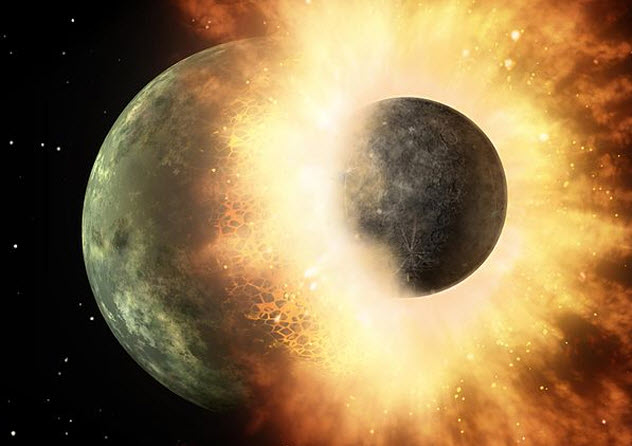 Planetary orbital paths aren’t stable and become even less so as time goes by. When scientists ran computer simulations on future planetary orbits, they found something surprising and perhaps a little disturbing.

In a couple of billion years, there’s a small possibility that the planets within our solar system will collide with one another. The path in which Mercury orbits around the Sun might widen enough to cross roads with Venus. Such an encounter could send Mercury hurtling into the Sun, out of the solar system, or on a collision course with Earth.

However, when researchers ran 2,500 simulations of different planetary orbits, only 25 indicated such a dangerous destabilization of Mercury’s orbit. Also, if Mercury crashes into Venus or the Sun, the other planets won’t be affected.

Researchers believe that there are several ways that the universe may permanently go poof. While most of them may happen after humanity is long gone, there may be one exception called the Big Change.

It’s similar to a simple experiment with water. If the water and glass are both exceptionally clean, then the water won’t freeze even if it’s kept just below the freezing point.

The water would be supercooled but remain liquid because it needs an object for ice to form against. Drop in a piece of ice, and the water will freeze swiftly. The universe is possibly in such a supercooled state but in terms of its vacuum.

Quantum physics states that even complete vacuums hold a speck of energy. But the danger lurks in vacuums that remarkably have even less energy. If two vacuums with a difference in energy meet, the result will be catastrophic.

Like the water, our universe—which is the vacuum with more energy—is waiting for a hair trigger to change its form as we know it. If a lower-energy vacuum somehow popped up in the universe, the newly born vacuum would rapidly create a bubble that would expand at the speed of light. It would destroy everything it engulfs—humans, galaxies, and the universe.

The constellation Sagittarius contains a potential threat that could send more life on Earth the way of the dinosaurs. A fiery spiral called WR 104 holds two stars at its center, orbiting each other while nearing the end of their lives.

Both are destined to self-destruct as supernovae. In fact, one is already in the last phase before its massive stellar explosion. Such a star is called a Wolf-Rayet and is considered a ticking time bomb in space.

This particular Wolf-Rayet may go supernova in the next few hundred thousand years. Due to its position, it could shoot gamma rays toward Earth. Gamma ray bursts—currently believed to be the strongest explosions in the universe—pack more energy in one minute than the Sun can hoard during its life span of 10 billion years.

Since the beams move at the speed of light, we wouldn’t see them coming. The WR 104 spiral system may be around 8,000 light-years away, but it can still wreak havoc on Earth. If these gamma rays hit us, there could be extinctions on a grand scale. We would experience agricultural disasters, acid rain, and starvation for the survivors.

A cooler climate and a thinned ozone layer would allow more harmful ultraviolet rays to penetrate the atmosphere. Anyone living on the side of Earth that faces the impact would experience radiation similar to a nuclear detonation and suffer radiation sickness.