Even though celebs are usually associated with glitz and glamour, they, too, suffer embarrassing moments. And more often than not, the ever-present cameras are right there to forever immortalize their epic fails on the Internet. On this list are some of the most cringeworthy celeb moments to grace our TV screens. 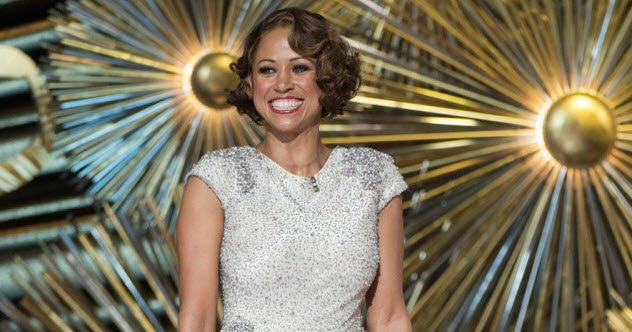 During the #OscarsSoWhite controversy, Stacey Dash did herself no favors in 2016 when she declared that Black History Month and the BET Awards should be done away with. She believed that it was a double standard to criticize the Academy Awards for being almost exclusively white when the BET Awards were awarded to black celebrities only.

A month later, host Chris Rock had people in stitches during the 2016 Oscars ceremony. After his great opening monologue, he introduced none other than Stacey Dash. As soon as she stepped onstage, things were awkward.[1]

Little applause greeted her appearance. To make things worse, she made possibly the worst joke of her life: “I cannot wait to help my people out. Happy Black History Month!” Guests and viewers alike were dumbfounded and completely silent, resulting in one of the most cringeworthy moments on live TV. 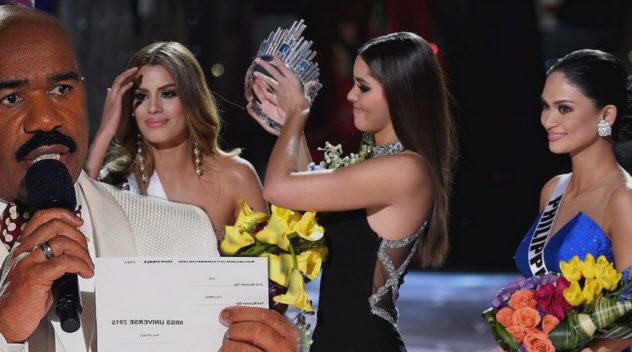 After the 2015 Miss Universe pageant ended, the credits were still rolling when the Steve Harvey memes started flooding Twitter. Everything was going fantastic right up until the end. The final group of contestants was waiting with bated breath to hear which one of them would walk away with the coveted crown. Harvey announced that Miss Colombia had won. Cue happy tears and the handing over of the crown.

However, moments later, Harvey realized to his utter dismay that he had read the card incorrectly and that the beaming woman with the crown already on her head was the first runner-up. The real winner was Miss Philippines. Removing the crown from one contestant to hand it over to another caused obvious tension. Harvey did not help matters much by tweeting an apology later and misspelling both country names.[2] 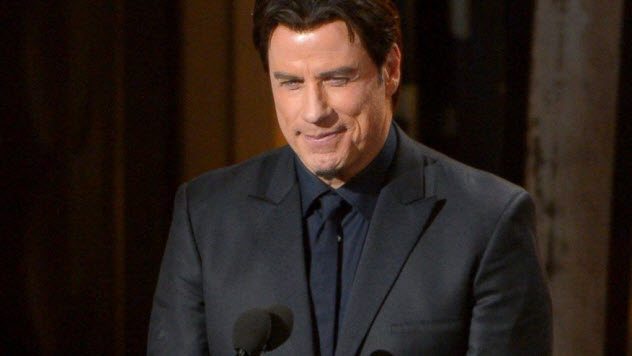 It seems that the Oscars stage is a very popular place for epic fails. One of these happened to John Travolta during the 2014 Oscars ceremony. It was time to celebrate the success of Frozen, and Travolta was onstage to introduce singer and actress Idina Menzel who was going to perform “Let It Go.”

Bizarrely, Travolta got flustered while speaking and ended up introducing her as Adele Dazeem,[3] which predictably had the Internet exploding with memes. It was not the last time that John Travolta would make people cringe on his behalf. At the 2015 Oscars event, he tried to kiss Scarlett Johansson on the cheek, getting a stoic response from the actress.

At the MTV Video Music Awards (VMAs) in September 2007, fans were excitedly waiting for Britney Spears to hit the stage. In February that same year, she had shaved her head one day after checking out of a rehab facility.

She returned to the facility two days later, only to leave again in less than 24 hours. Meanwhile, her then-husband Kevin Federline was trying to get custody of their two sons. The VMAs performance was going to be her big comeback.

Unfortunately, as soon as she stepped onstage, it was clear that the comeback was not going to happen. Dressed in an ill-fitting outfit that highlighted all the wrong things, Britney basically flopped around onstage.

She seemed to forget her dance moves, flubbed her lip-syncing to “Gimme More,” and looked less than interested in performing. Many called the performance “painful to watch.”[4]

The 2009 VMAs saw Taylor Swift walk away with the Best Female Video award. However, in a terribly embarrassing moment for hosts of the show and fans alike, Kanye West rushed to the stage and interrupted Swift during her acceptance speech. He was peeved because Beyonce had lost out to the young pop star, exclaiming “I’ll let you finish, but Beyonce had one of the best videos of all time!”[5]

The incident left both Swift and Beyonce in tears about five minutes before Swift had to go back onstage to perform. Beyonce later called Swift back to the stage to give her a chance to finish her speech. Beyonce also ended up winning Video Of The Year, essentially making West’s tirade pointless and very unnecessary. 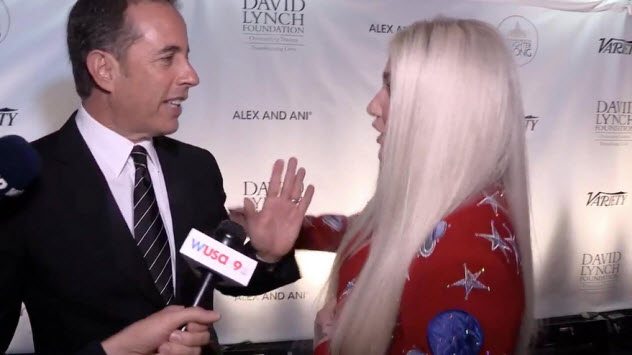 In 2017, Jerry Seinfeld was being interviewed by Tommy McFly on the red carpet at the David Lynch Foundation’s National Night of Laughter and Song event. On the same red carpet, singer Kesha was posing for the cameras when she spotted the comedian.

Being a huge fan, she immediately made her way over to him to introduce herself. Then she also inexplicably asked for a hug, to which Seinfeld responded, “No, thanks.”[6]

As if that wasn’t reason enough to make her turn on her heel and skulk away, she tried again. To which he replied more forcefully: “Yeah, no thanks.” Seinfeld admitted later that he had no idea who she was.

As for Kesha, she stated that she was slightly traumatized after being rejected. But getting two hugs from Bob Dylan later on made up for the awkward experience. 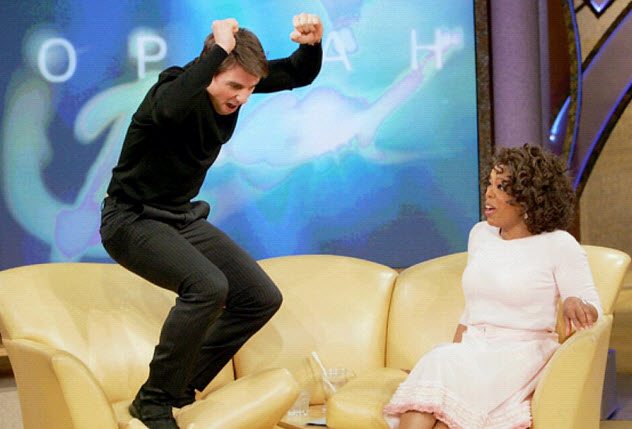 In 2005, a very strange thing happened on The Oprah Winfrey Show. Tom Cruise was her guest, and he was meant to promote his upcoming movie, War of the Worlds. Up to that point, Cruise was a big box office star and a heartthrob in the eyes of many women.

Many thought it was very cute when he started talking about how much he loved his girlfriend, Katie Holmes. However, their eyes widened when he suddenly got up and jumped up and down on Oprah’s couch to demonstrate his feelings, all the while laughing out loud.[7]

Then he went backstage to get Holmes to gush over her even more. The awkwardness soon turned sour when rumors began making the rounds that Holmes was the result of a wife search done by the Church of Scientology. 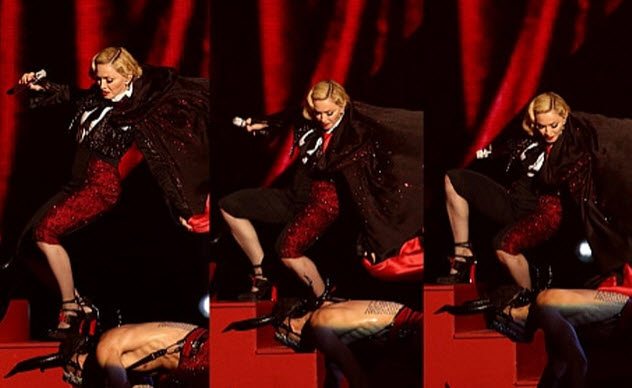 Madonna has had her fair share of shocking moments onstage as well as in her personal life. However, the incident at the O2 auditorium in 2015 was downright embarrassing.

While onstage during the Brit Awards, Madonna struggled to take off her cape while singing the opening lines to “Living for Love.” One of her dancers attempted to help her out by trying to pull it off her, but instead, he literally swept the singer off her feet.[8]

While standing on a podium at the top of some stairs, she tumbled backward down those stairs. Some members of the audience thought it was part of the show until they realized Madonna had dropped her microphone and was lying on the floor surrounded by her dancers.

She recovered quickly and finished her performance, including a dance scene. This left her fans relieved that she didn’t suffer any serious injuries. 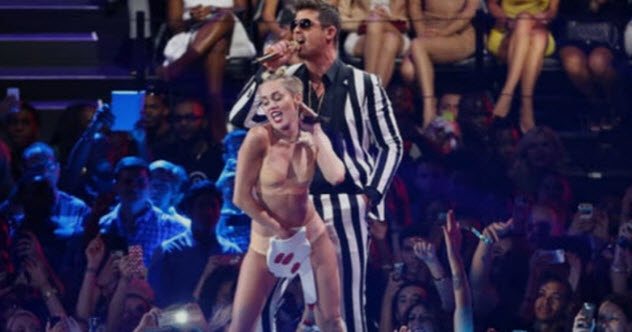 Before the MTV Video Music Awards ceremony took place in 2013, Miley Cyrus promised fans a more “shocking” moment than the smooch between Madonna and Britney at the 2003 award. What Cyrus delivered was one of the most cringe-inducing moments of her entire career.

After entering the stage from the inside of a giant teddy bear, Miley sang “We Can’t Stop,” one of her own hits. Robin Thicke then joined her for a performance of his song “Blurred Lines.” During the performance, Miley twerked suggestively in front of the much older Thicke, thrusting her pelvis at intervals and also running a foam finger over her nether regions.[9]

Will Smith and his family were caught on camera during the performance, looking shocked and with their mouths hanging open. Twitter users ranted over what they called a “vile and disgusting” performance. Many audience members were flabbergasted at what they had witnessed.

In 2017, however, it seems that Miley has retired her wild side and is returning to her country roots with the release of the relatively tame “Malibu.”

Will Ferrell is a genius at creating cringeworthy scenes in his movies. He wasn’t prepared, however, for the embarrassing moment that would surround him at the 2013 MTV Movie Awards.

Ferrell had been called onstage to accept his Comedic Genius award. He was busy giving his thank you speech when Aubrey Plaza suddenly rushed up to him barefoot and with a drink in one hand.

Without saying a word, she grabbed hold of his award and tried to pull it free from his hand. Ferrell, being genuinely confused, refused to let go of the award. Eventually, he asked her what was happening and if she was okay. Plaza then returned to her seat, dropping her drink on the floor.

Ferrell joked about it afterward. But the awkwardness remained in the air, especially after she was kicked out of the venue shortly after the incident. MTV maintained that the incident was not planned.[10]