Television series, variety shows, cartoons, and even commercials censored or banned content that networks or advertisers deemed inappropriate for the audiences of the 1950s and 1960s (and, in one instance, the 1980s). At the time, such censorship, much of which was directed at sensuality, sexuality, bodily functions, and recreational drug use, may have seemed reasonable—to the censors, at least.

In retrospect, many people today are apt to be surprised by TV networks’ past efforts to shield their viewers from shared beds; an actress’s navel; pregnancy, both as a word and as a condition; toilets; political parody; song lyrics; Elvis Presley’s gyrating pelvis; women who would dare to model brassieres and men who wore briefs; and “risque” cartoons. 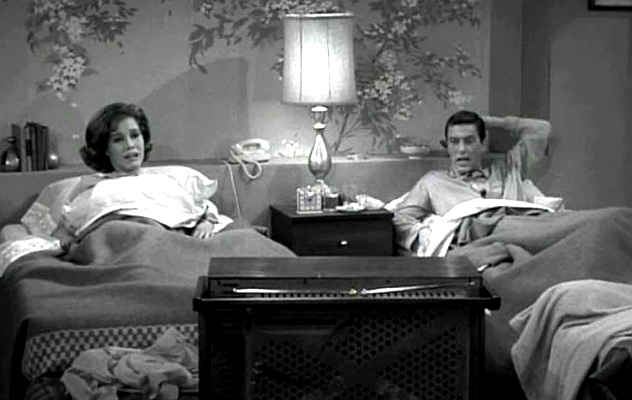 During the 1950s and 1960s, sex was considered a private matter, and even a suggestion of sexual relations between married couples was regarded as inappropriate. Networks went to rather extreme measures to prevent even the slightest hint of sexuality, even in marriage. On TV shows, married couples such as The Dick Van Dyke Show’s Rob and Laura Petrie (Dick Van Dyke and Mary Tyler Moore) were forced to sleep in widely separated twin beds.[1] 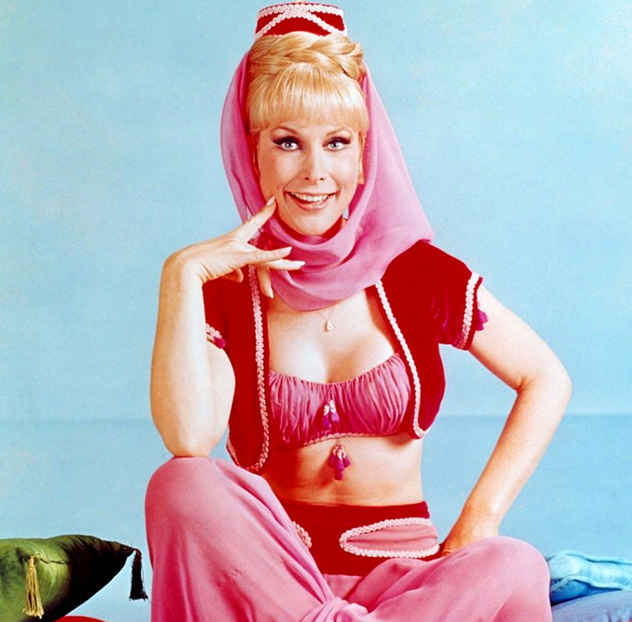 The TV situation comedy I Dream of Jeannie, starring Barbara Eden as a genie and Larry Hagman as astronaut Tony Nelson, who frees her from her bottle, was broadcast from 1965 to 1970. Eden wore a costume comprised of a hat and attached veil, a short red vest, a pink bra top, loose-fitting harem pants with a wide, tight red waistband, and pointed-toe slippers. The outfit was sexy, but not as sexy as the original costume, which, in addition to Eden’s midsection, showed the actress’s navel.

Eden recalls there was a meeting between the show’s producer, George Schlatter, and NBC executives concerning Schlatter’s desire to “premiere my navel.” He told Eden he had “never seen so many suits sitting around a table in his life discussing someone’s anatomy.” The executives nixed Eden’s navel, which explains the costume’s wide waistband, which covers the objectionable umbilicus. Ironically, in one episode, when Jeannie and Tony visit the beach, Eden wears a one-piece swimsuit as a bevy of bikini-clad women cavort about, navels on display.[2]

Eden’s navel was not the only thing NBC censored. According to the actress, executives also required her harem pants be “lined with silk” to prevent her legs from showing “through the transparent fabric.”

Jeannie transformed into smoke whenever she entered or exited her bottle. To prevent the impression she may have spent the night with Tony, network censors “banned Jeannie’s smoke . . . from disappearing under Captain Nelson’s bedroom door.” Executives made the cast and crew re-shoot one episode because the genie’s smoke appeared under Tony’s door. “The smoke must never spend the night in the bedroom of a man,” they decreed. If the smoke was shown disappearing under Tony’s door, it had to be shown emerging again.

Jeannie also had to be careful not to introduce double entendres when she made such comments to Tony as, “And I am going to please thee very much.” To avoid a possibly salacious interpretation of her words, executives suggested, after delivering this line of dialogue, Eden add an allusion to “jewels or money.” 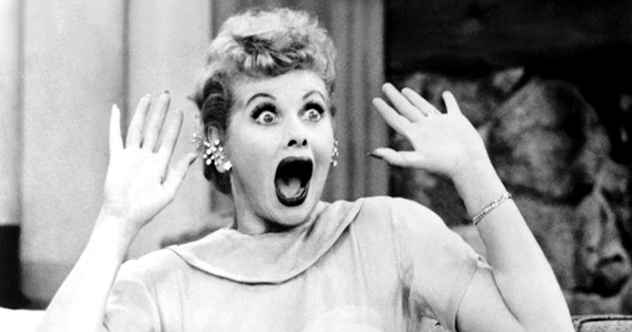 In the mid-20th century, not only were married couples obliged to sleep in separate beds, but wives could not be pregnant on TV shows. In fact, neither they, their husbands, nor anyone else was even allowed to say the word. On the classic sitcom I Love Lucy, starring Lucille Ball and Desi Arnaz, they got around the network’s prohibition by referring to Lucy Ricardo, the character Ball played, as “enceinte,” which is French for “pregnant.”

The censors approved, and “Lucy Is Enceinte,” a special third-season episode, announced Lucy’s pregnancy. As Ricky (Arnaz) is performing in his nightclub, the Coca Cabana, Lucy arrives, handing a note to the doorman, who delivers it to Ricky. The note informs him that a couple is about to have a “blessed event” and asks him to sing “We’re Having a Baby, My Baby and Me.” Ricky agrees but decides to first find out who the lucky couple is.

As he sings “Rock-a-Bye Baby,” he walks from table to table, asking seated couples whether it is they who are having the blessed event. Finally, he comes to Lucy, seated alone at one of the tables, and she nods, indicating it is she who is pregnant. At first, her message doesn’t register with him, but, when it does, he has her join him on the stage as he sings the song.[3] 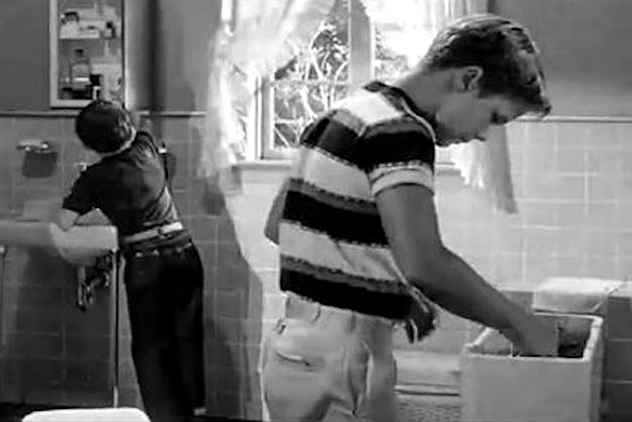 The initial episode of the situation comedy Leave It to Beaver (1957-1963) almost didn’t air because of a toilet. Beaver (Jerry Mathers) and his older brother Wally (Tony Dow) planned to keep a turtle in the toilet tank of the bathroom off their bedroom. “At that time, you not only couldn’t show a toilet, you couldn’t show a bathroom on TV. It was prohibited,” Mathers explained.

When the show’s producers agreed to show only the back of the toilet tank, network censors decided to make an exception to their rule prohibiting broadcasts featuring toilets, and Leave It to Beaver earned the distinction of becoming the first sitcom ever to show a bathroom.[4]

Bob Dylan was scheduled to appear on the May 12, 1963, edition of The Ed Sullivan Show, an immensely popular variety show. He was then mostly unknown to general audiences. A year before, Time magazine referred to him as “a promising young hobo” with “long, tumbling hair” and a “nasal” sound. Dylan had auditioned for the show with a parody sung from the point of view of a paranoid John Birch Society member who sought communists “everywhere, including his chimney, toilet and glove box.”

Although Sullivan approved the performance, a CBS executive considered the song too controversial when he happened to hear it during dress rehearsal, objecting to lyrics such as, “Now Eisenhower, he’s a Russian spy/ Lincoln, Jefferson, and that Roosevelt guy/ To my knowledge there’s just one man/ That’s really a true American: George Lincoln Rockwell,” who founded the American Nazi Party. Dylan was given an ultimatum: sing a different song or change the lyrics. Instead, he opted not to appear on the show.[5]

5Reference to Recreational Drug Use

Network censors also objected to The Ed Sullivan Show’s plan to feature The Doors, a rock group fronted by lead singer Jim Morrison. The band had selected a song called “Light My Fire,” which contained the line “Girl, we couldn’t get much higher.” Fearing the show’s audience would interpret the line, in the context of the song’s title, to refer to smoking marijuana, they demanded Morrison change the lyric to “Girl, we couldn’t get much better.” Morrison agreed to the substitution, but, when he sang the song on live TV, he retained the original line. As a result, the Doors were banned from appearing again on the show.[6] 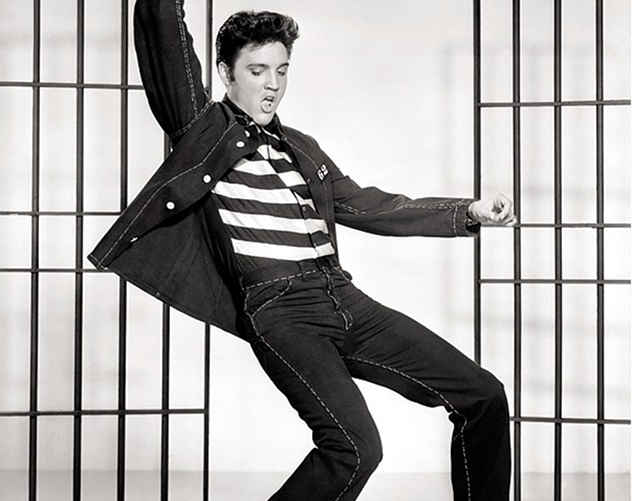 Two other performers whose acts met with censors’ disapproval and demands for change were The Rolling Stones and Elvis Presley. Like The Doors, they also performed on The Ed Sullivan Show, the former on January 15, 1967, and the latter on September 9, 1956.

Mick Jagger, the lead singer for The Rolling Stones, was asked to change the line “Let’s spend the night together” to “Let’s spend some time together.” Sullivan was clear that his demand was not just a suggestion. “Either the song goes, or you go,” he told them. Jagger complied, but he made his feelings about the song’s revision known by rolling his eyes every time he sang the substituted lyric.

Elvis Presley‘s lyrics were tame, but his locomotion was wild. He gyrated his hips with such seductive abandon that the show’s producers demanded The Ed Sullivan Show camera operators film him only above the waist. Even without the sensual undulations of his hips, Presley wooed his audience, and their “thunderous screams” helped sell $1 million’s worth of “pre-order sales for his hit single ‘Love Me Tender.’” The singer made two more appearances on the show, each of which were full-bodied performances.[7] 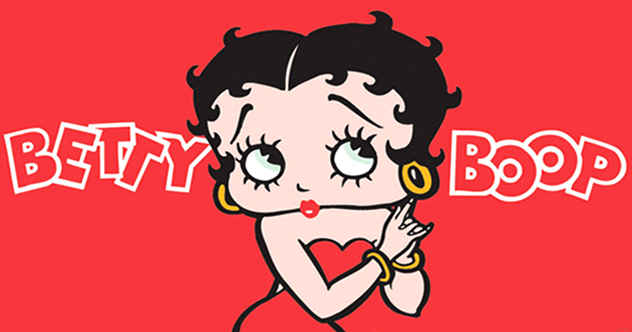 Max Fleischer’s cartoon character, flapper Betty Boop, originally appeared on the big screen, but she made her debut on TV during the 1950s. By then, most of the censorship issues involving her had been thrashed out between Motion Picture Production Code representatives and Fleischer Studios, whose artists created her features. “The code punished Betty for her short hemlines and garter, for her sex appeal and for her representation of liberation and fun.” As a result, “her hemlines were lengthened, her garter removed,” and she began wearing pencil skirts and collars. She also became a nanny, as she transitioned to “a responsible, maternal ‘mother.’”

Despite her makeover, Betty continued to run afoul of TV censors. As Jere Guldin, former vault manager of the UCLA Film and Television Archives, points out, “Old Man of the Mountain,” a 1933 Betty Boop feature, was not shown on TV, probably because it shows her “stripped down to her underwear,” before she shinnies “up a tree, and then gets her butt licked at one point.” Instead, there is a gap in the film, before Betty appears again, fully clothed.[8] 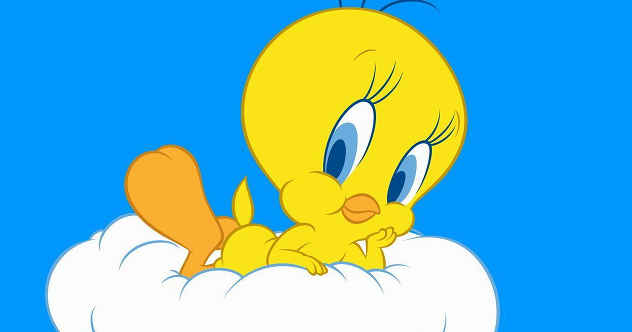 If TV censors balked at sensuality, they sure weren’t about to show nudity, and Betty Boop was not the only character to be banned from broadcast as a result of her nakedness. Another cartoon nudist, Warner Bros.’s Tweety Bird, was told to put some clothes—or, rather, feathers—on. In his first cartoon, Tweety is pink, but censors said he looked naked, so, animator Bob Clampett said, he was repainted, yellow, so he appeared to have feathers.[9]

Even TV commercials did not escape censorship. Curiously, mannequins were allowed to model bras on the public airways, but, until 1987, models were not. On May 4 of that year, NBC aired the first woman to wear a brassiere, the Playtex Cross Your Heart bra. According to the Playtex’s Vice-chairman Hercules P. Sotos, it was about time. “I don’t see why it should be taboo to show a woman in a bra,” he said. “It’s much more effective in showing the product’s attributes than a manikin.” Chairman Edward H. Meyer, of Grey Advertising, Inc., the company producing the ads, agreed. “We’ve had a whole generation of kids who grew up thinking that when a woman takes off her blouse, she turns into a manikin,” he said.

Apparently, Fruit of the Loom executives believed what was good for the goose was good for the gander because they planned to follow suit, airing an advertising campaign showing a male model wearing briefs. Grey Advertising, Inc. also produced these ads. Network executives attributed viewers’ acceptance of more permissive attitudes toward such advertising to “a change in the public’s taste,” while industry analysts cited “the growing acceptance of condom advertising by some stations” as an influence that “may have nudged the door open.”[10]

Gary Pullman, an instructor at the University of Nevada, Las Vegas, lives south of Area 51, which, according to his family and friends, explains “a lot.” His 2016 urban fantasy novel, “A Whole World Full of Hurt,” available on Amazon.com, was published by The Wild Rose Press.

Read more about censorship on 10 Times Censorship Made Something Way More Offensive and Top 10 Ridiculous Instances Of Censorship In Pop Culture.