Robots are going to take our jobs. That’s not a paranoid fear of some grim, dystopic future—at this point, it’s just a fact. Factories are becoming automated, delivery trucks are becoming self-driving, and drones are beginning to fill the skies. Some jobs, we’re starting to accept, just aren’t going to be meant for humans much longer.

But it might not stop there. Because it’s not just factory workers who are being replaced by robots; it’s everyone, from the creative to the personable. Some of the last jobs—and even just social roles—you’d ever imagine are being taken over by robots, including some you would never have considered.

Pepper is a 120-centimeter-tall (3’11”) android that, originally, was put to the slightly less blasphemous uses of serving sushi and helping customers at the bank. Today, though, the company has rebilled their robot as “a cheaper alternative to human priests”—a digital discount holy man.[1]

For ¥50,000, people can hire Pepper to preside over the funeral of any loved one who wasn’t quite special enough to break the bank on hiring a real monk. There are even some perks to hiring a robot: Pepper isn’t hung up on denominations, so it can perform a service for any of the four major Buddhist sects.

As crazy as all that sounds, there are 10,000 Peppers out there in the world, so there’s a market for it. Not all of them are performing Buddhist services, though. And, for the real modern family, you can even have your loved one’s ashes stored in a space-efficient warehouse with a touchscreen panel that lets you digitally view their remains. 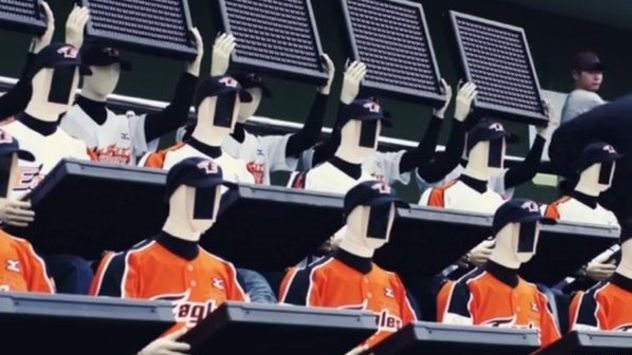 A Korean baseball team called the Hanwha Eagles has taken a new approach to bringing out fans. Instead of trying to lure in real people, they’re just filling their stadiums with robots.[2]

After a long losing streak that started with their first game and didn’t end ever, the Eagles started having trouble filling seats. Few fans wanted to go through the soul-crushing experience of trying to root for the team their town was saddled with, and soon, the team was playing to rows upon rows of empty seats.

So, they set up a group of robots that fill the empty rows, programmed to cheer, chant, do the wave, and be nearly everything else a real human can be. Fans who can’t be bothered to come out to the games can even log in to the robots from the Internet and project their faces onto the machines.

It’s a fun gimmick—and a weird glimpse into an odd future. The players for the Hanwha Eagles are still human, but now they’re playing for the entertainment of a sea of metallic men programmed to cheer them on. 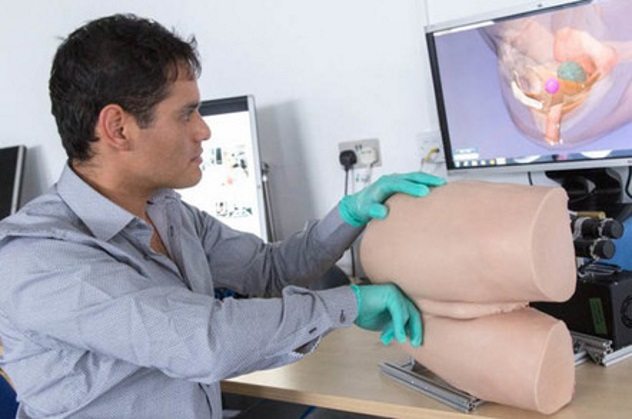 Rectal teaching assistant isn’t exactly a job in wide demand, but in the UK, there is one man who makes his living by letting medical students practice sticking their fingers up his bum. Or, at least, if there was such a person, he recently lost his job to a robot.

The robotic buttocks were built by lab workers at Imperial College London.[3] The device touts a lifelike anus and silicon rectum, puckered by the pressure of tiny robotic hands that make sticking your finger into it as natural and lifelike an experience as possible. This literal job-stealing butthole can do things that no mere human buttocks can do. It can vary its anatomy to give a wide range of realistic probing scenarios. Plus, it’s not shy about letting people watch.

Working with live humans, doctors can’t really see what their trainees are doing up the buttocks of their strangely willing volunteers and, presumably, just have to work off their facial expressions. The robot butt, though, has a computer screen that lets you watch what’s happening inside. It even works with 3-D glasses—which, for some reason, the developers thought would be an important feature. 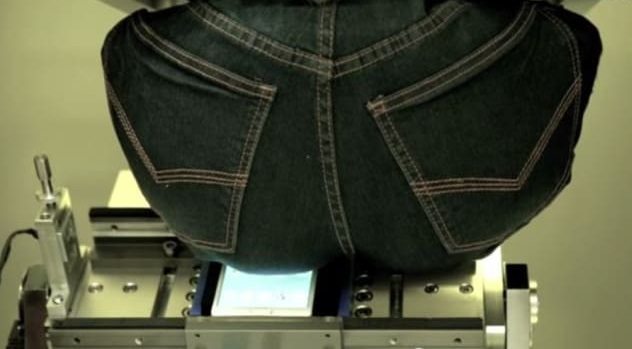 Robotic butts, apparently, are a major focus in robotics development right now. It’s not just medical engineers that are building them—a whole group of robotics experts are developing a metallic machine to replace what, as it turns out, is actually a pretty major source of income for a lot of humans: having butts.

Samsung used robot buttocks for its “Human Weight Test,” which, for some reason, did not involve humans. They needed someone to sit on their phone to prove that it wouldn’t bend. This, Samsung apparently believed, was a job that no human could be trusted to do. Instead, they needed to develop a complex, state-of-the-art robot butt. 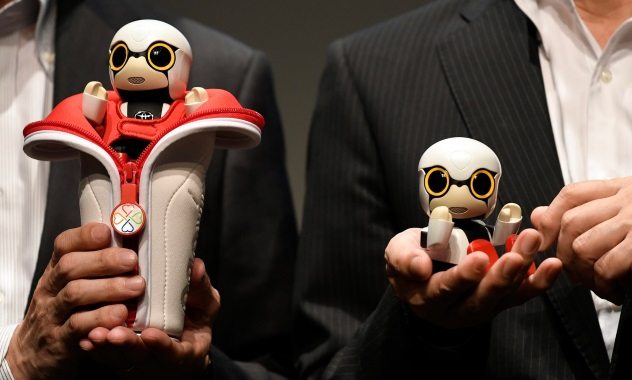 In Japan, they’re even replacing babies with robots. Birth rates there are plummeting; more and more young adults aren’t getting married, and they’re being left with a void of happiness that can only be filled by the love of a child. Or an adorable pocket-sized robot. Either one.

The Kirobo Mini was specifically created to replace the emotional connection that comes between a mother and her baby. It’s designed to wobble like an infant learning to walk, a feature specifically designed to ignite maternal instincts.[5] It’s even programmed to recognize its mother and to answer with high-pitched, childlike coos whenever she calls.

In short, it’s a robotic baby—but a lot easier. It never cries, it’s small enough to fit in your pocket, and, when you get sick of it, you can just turn it off and throw it in the garbage. This, apparently, is what the makers of Kirobo Mini think is the future of human connections. 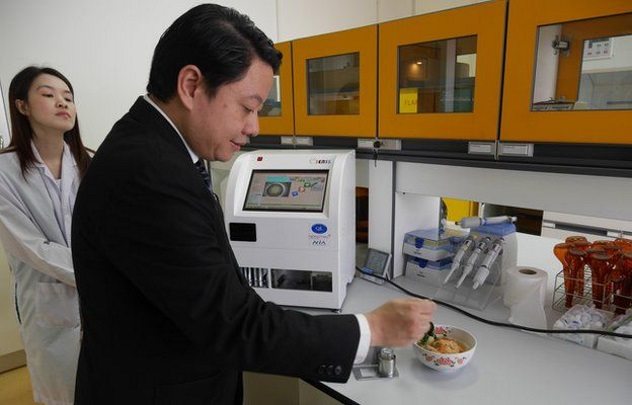 When the former prime minister of Thailand, Yingluck Shinawatra, got fed up with cheap imitations of Thai food around the world, she demanded something be done about it. She called the Thai government together for an emergency cabinet meeting, and they came out with a solution: They needed a robot.

The Thai government calls their creation the “e-Delicious,” a secret project they spent years on, developing, for reasons no one completely understands, a robotic food critic.[6]

The e-Delicious is programmed to scientifically evaluate any Thai cuisine. It measures the chemical makeup of a dish, compares it to what the Thai government considers the “ideal” form of that food, and then it gives it a mathematical score. According to the leader of development, this is the “cheapest and easiest approach” to grading food—although the project cost hundreds of thousands of dollars and took up one-third of the National Innovation Agency’s budget.

The people of Thailand don’t seem as thrilled as Shinawatra was hoping. “I use my tongue to test if it’s delicious or not,” one baffled Thai resident said when the project was unveiled. “I think the government should consider using a human.” 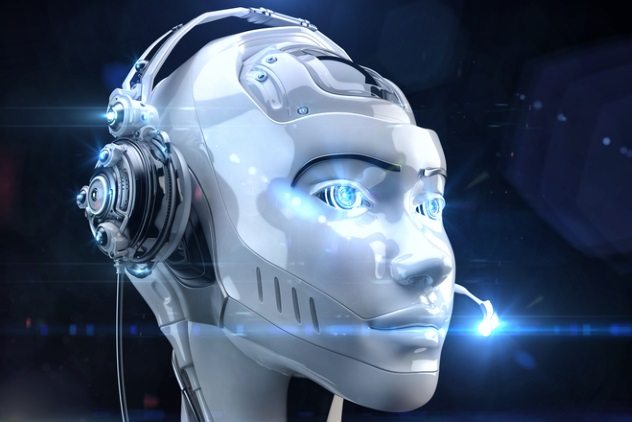 Calling a hotline and getting a recorded message is nothing new. Such places have computerized menus or use robo-callers to contact their customers, but one life insurance company, Premier Health Agency, is taking it a bit farther. They’ve made a robot to connect you to when you ask for a human.

The company has created robotic telemarketer programmed to deny that she’s a robot. It calls itself Samantha West and uses prerecorded messages to insist that it is a real person—no matter how many times you ask. If you call her out on being a machine, she’s programmed to laugh and say, “I am a real person. Maybe we have a bad connection, I’m sorry about that.”[7]

It’s not exactly foolproof. If you start talking about anything other than life insurance, Samantha gets flustered and confused. Still, it’s a weird step forward into a future where it’s getting harder and harder to tell if the person you’re talking to is a man or a machine.

The next big pop song might be written by a robot. Researchers at Georgia Tech have created a robot called Shimon that can compose and play its own music.[8]

It’s a four-armed, marimba-playing machine that listens to music and uses it as inspiration to write songs of its own. The machine uses deep neural learning systems to decode different styles of music, analyze their patterns, and then take them as inspiration to compose original pieces of music.

The creator, Mason Bretan, claims that the machine has actually gotten smarter over time. Early on, he says, it wrote songs methodically, note-by-note, but now it processes whole movements at a time. It can even jam out with a band. It’s programmed to list what other musicians are playing and improvise along with them.

They showed the robot everything from Beethoven to Lady Gaga, but Shimon, it seems, has leaned toward a fusion of jazz and classical, with people noting its pairing of classical harmonies with jazz melodies—which might just mean that, when it comes to writing hit songs, even robots are more willing to take risks than we humans are. 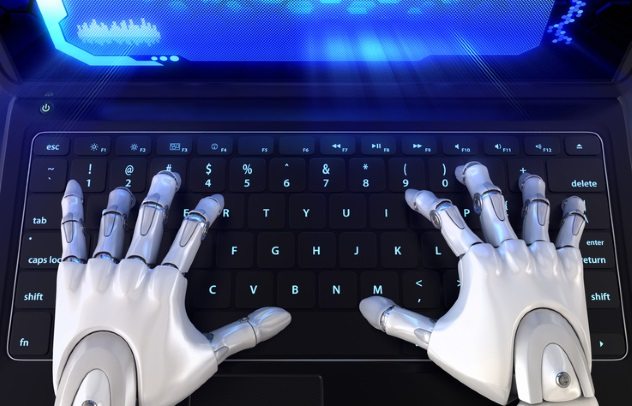 Believe it or not, multiple original works of fiction have been written by computers—and one was even short-listed for a literary prize.

One of the first books written by a robot was a Russian novel called True Love, and in Russia, it was actually one of the best-selling novels of the year. That one, though, partly got off the shelves by marketing the robot author as a gimmick.

That’s why the most incredible story has to be the aptly-titled Japanese work, The Day A Computer Writes A Novel. A programmer gave a computer a plot summary, some characters, and a book to use as stylistic inspiration and let it churn out this whole story. Then he entered it into a literary award contest and actually got past the first round.

“I was surprised,” one of the judges said when he found out that the novel was written by a machine. “It was a well-structured novel.”

The novel’s ending, though, is a little eerie. The machine that wrote the book closed it with this final sentence: “The computer, placing priority on the pursuit of its own joy, stopped working for humans.”[9]

Sometimes, it seems like the only job that’ll be left for humans will be making new robots, but that’s simply not true. They’re making robots to do that, too.

In Japan, there’s already a factory that has nothing in it but robots that build other robots. The machines work, without human supervision, for 24 hours a day constructing more machines, and they can build about 50 new robots every day. Human beings only pop in to check on them once a month. Otherwise, there’s not a living soul in the whole factory.

And they’re even making robots that design new robots. Researchers at the University of Cambridge have created a robot that can not only build robots but can also analyze them and improve on their designs. The so-called “mom” robot builds tiny little machines that race around the table and analyzes how well they work. Then it destroys every robot except for the most successful one and creates some new variations, keeping what works and cutting out what doesn’t.[10]

Each generation gets faster and faster, and the robots get more and more capable—all without human minds getting in their way, which means that, pretty soon, the robots won’t even need us to build them.

Now all we can do is hope that the computers won’t place priority on the pursuit of their own joy and stop working for humans. But surely they’ll never think of that.

Read more about robots with abilities you might not have guessed on 10 Strange Robots That Could Potentially Save Lives and 10 Incredible Robots That Mimic Animals.