Forests are truly amazing places. Combining impressive biodiversity with natural beauty, the woods of the world can be both captivating and perplexing. A hike through a forest can be a relaxing way to pass an afternoon or, sometimes, a glimpse into the unknown.

There are many forests in the world with question marks hanging over them. Just think of Poland’s crooked forest and the Rendlesham Forest incident. On this list are some lesser-known mysteries surrounding forests around the globe.

The mystery that is Kraterokheirodon started with the discovery of a strange-looking tooth in 1946. The tooth, shaped like a shell, was handed over to paleontologist Edwin Colbert at the time. Nothing came of the discovery until Colbert’s interest in the tooth was sparked anew by the discovery of a similar one in the Petrified Forest National Park in Arizona. He did his best to identify the creature that the tooth belonged to, right up until his death in 2001.

While the Kraterokheirodon teeth are somewhat similar to those of cynodonts, they are a lot bigger and do not necessarily show any relation to them. It is also unknown how the strange teeth would have fit into the creature’s mouth. The only thing known for sure is that Kraterokheirodon was a massive animal. Experts are continuing their research in the hopes of uncovering this mystery. 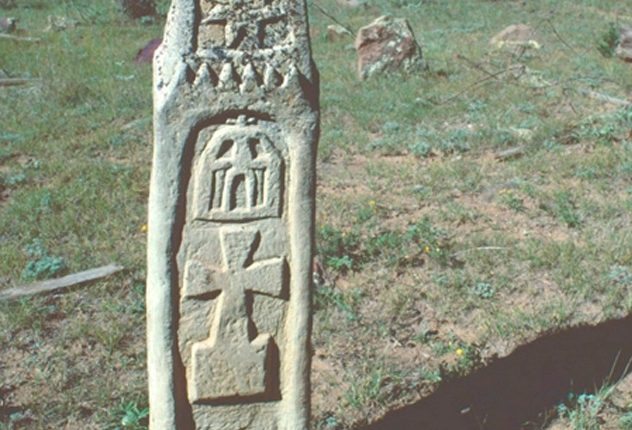 Historian Louis Serna spied a ornate stone pillar in a hotel lobby in 2013. Intrigued by the symbols (including a Templar cross) carved on it, Serna tried to find out more about the pillar from the hotel employees. After being told that it was simply a trail marker, Serna realized he would have to get into contact with the original owner of the hotel if he was to get credible information. He was right. After he traced the original owner, the man told him that a rancher discovered the pillar in a New Mexico forest and that it had been on display at the hotel ever since.[2]

Suspecting there was even more to this story, Serna eventually approached the US Forest Service, where he was informed that, in fact, there were two stone pillars found in Carson National Forest and that the second pillar is located among several other stones thought to be grave markers.

Serna remained skeptical about this information, believing that the pillars may have been markers used by ancient explorers during the colonization of the area. Serna also remains hopeful that archaeologists will look into his theory and come up with answers to explain the origin and purpose of the pillars. 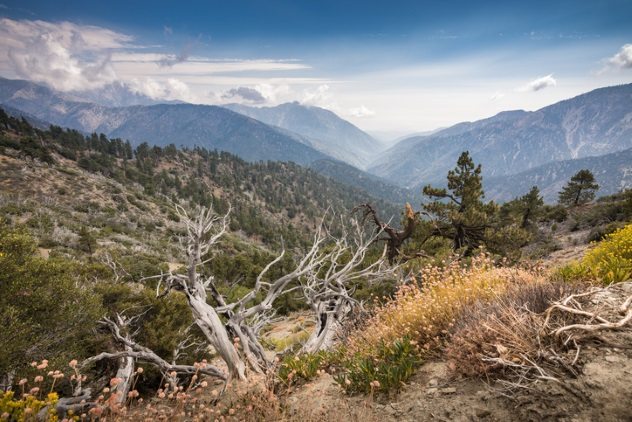 The Angeles National Forest in Southern California was established in 1908 and contains five designated wilderness areas. It is a registered California Historical Landmark and includes several popular picnic and camping spots. Unfortunately, it is also the location of several unsolved disappearances.[3]

In 1956, 11-year-old Brenda Howell and 13-year-old Donald Lee Baker set off on their bikes to go exploring in the San Gabriel Canyon area. They never returned. An extensive search of the area only uncovered the two bicycles and Donald’s jacket. In 1957, two brothers-in-law took their kids for a hike in the Arroyo Seco area when the eldest, eight-year-old Tommy Bowman, decided to run ahead on the trail. He disappeared around a bend, and when the others got there, he was nowhere to be seen. He was never found.

Then in 1960, six-year-old Bruce Howard went on a camping trip with 80 other children and adults in the Buckhorn Flat. 275 meters (900 ft) from their camp, Bruce became tired, and the supervisor sent him back to their camping site. He watched until Bruce had almost reached the camp before continuing the hike with the others. It only took minutes to discover that Bruce never actually got to the camp. He was never seen again.

It was suspected that sex offender and child molester Mack Ray Edwards may have played a role in the above disappearances, and he even confessed to the murders of Brenda Howell and Donald Baker. However, a lack of evidence and Edwards’s eventual suicide kept him from ever being tried. 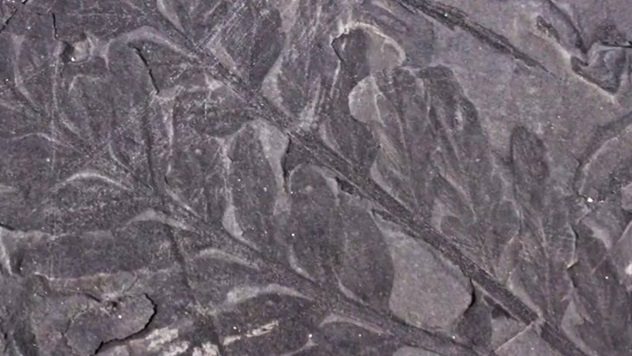 Before the first dinosaurs, almost 260 million years ago, Antarctica looked nothing like it does today. The climate was a lot warmer, and the landscape was covered with several dense forests. It is thought that these forests existed around the same time as the biggest mass extinction that has ever occurred.[4]

It is believed that the Permian-Triassic extinction event was triggered by an unprecedented increase in greenhouse gases, possibly due to volcanic eruptions in Siberia. Experts are hoping that the fossilized forest remains will provide some insight into this theory.

Explorers and other scientists have been aware of the fossilized forests since 1910 or so, but there are still mysteries surrounding them. It remains unclear, for instance, just how the trees and plants survived the cold and dark winter months and how the trees were able to switch between winter and summer modes as quickly as they did, i.e. hibernating during winter and growing in summer.

Research is ongoing and planned up until January 2018. 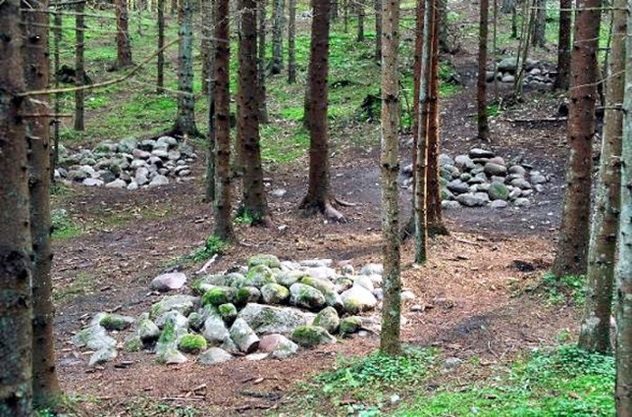 Pokaini forest in Latvia is steeped in myth and mystery. Legend has it that visitors to the forest in ancient times brought rocks with them as penance for their sins. These rocks would then also symbolize the absolution of their sins. Considering that this is just a myth, it remains a mystery as to where the rocks in the forest actually come from.

The rocks are grouped together in a specific sequence around 30 hills.[5] There are rumors that some of the rocks have healing powers (because some of them are hot to the touch) while others have destructive powers. People are advised against taking a rock home as a souvenir, as bad times may befall them if they do.

There is also an old pine tree under which the temperature remains higher than anywhere else in the forest. Some visitors to Pokaini believe that this anomaly as well as malfunctioning watches and compasses mean that the forest could be a gateway to a parallel universe.

In July 2014, a couple of friends, including 28-year-old Lars Mittank, landed in Bulgaria for a holiday at Golden Sands. Things quickly turned sour for Mittank when he became involved in a brawl on the beach during an argument over football, resulting in an injury to his ear.[6]

After being advised by a doctor to delay flying for a couple of days, Mittank decided to stay on in Bulgaria for further medical attention. He told his friends to go on home and rented a hotel room in a less-than-desirable area. His stay at the hotel only lasted one night, however. He texted his mom and told her to cancel his credit card and that he was trying to hide from four unknown men who were inquiring about his medicine.

Mittank went back to the doctor’s office the following day but never saw the doctor because he suddenly flipped out and ran away. He then went to the airport, but he left there as well. CCTV footage showed the young man jumping a fence and disappearing into the forest behind it. Lars Mittank has not been seen since. 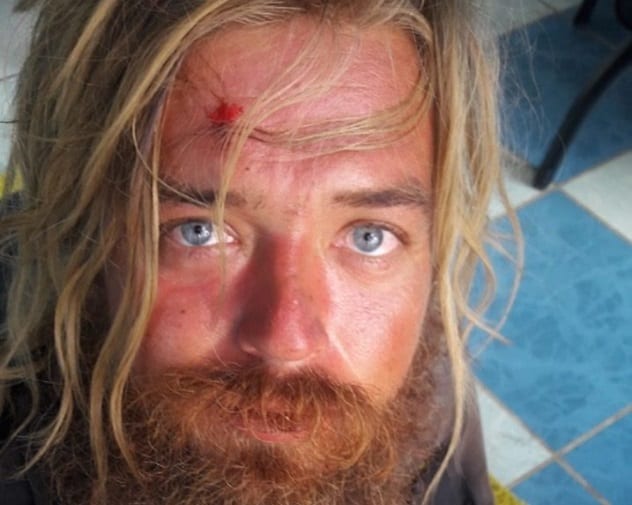 Anton Pilipa disappeared from Toronto in 2012, shortly before he was due to appear in a local court on assault and weapons charges. As the years rolled by, it seemed less and less likely that Pilipa, who suffered from schizophrenia, would ever be found.[7]

However, in early 2017, Pilipa was found wandering around near Manaus in the Amazon rain forest. Amazingly, he traveled across ten borders without documentation or any form of identification before landing up in Buenos Aires, where he was refused entry. From there, he headed to Brazil. Police found Pilipa and took him to a hospital, from which he escaped and then disappeared into the forest. He was later discovered again (in the forest), and his family was notified via social media.

It remains unknown just how Pilipa managed to travel that far without anyone suspecting anything strange regarding his lack of documentation and why he disappeared in the first place. 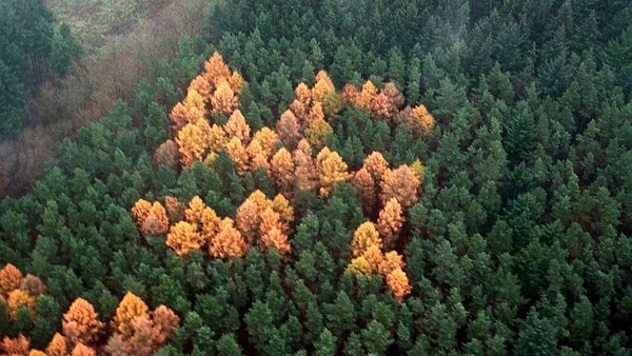 In 1992, an intern for a landscaping company in Germany was taking photos from a plane when he noticed something weird way down below. On the north side of Zernikow, a patch of larch trees was sticking out against the rest of the forest. The reason? They formed a giant swastika.[8]

Because the effect of the different-colored trees disappears during spring and is only present during autumn, it took many years for anyone to discover the Nazi symbol hidden away in the forest. Who planted the trees remains a mystery, but it has been estimated that they were likely planted in 1938, while Hitler was in power.

Theories about the tree swastika include it being a “birthday gift” to Hitler or a show of gratitude by locals after a street was built in Zernikow. Another theory says that the swastika was created to show loyalty to Hitler after a local was sent off to a concentration camp when it was discovered he had been listening to BBC radio.

The swastika was destroyed sometime after 1995, when authorities removed most of the trees that remained after the first attempt at destroying it failed. 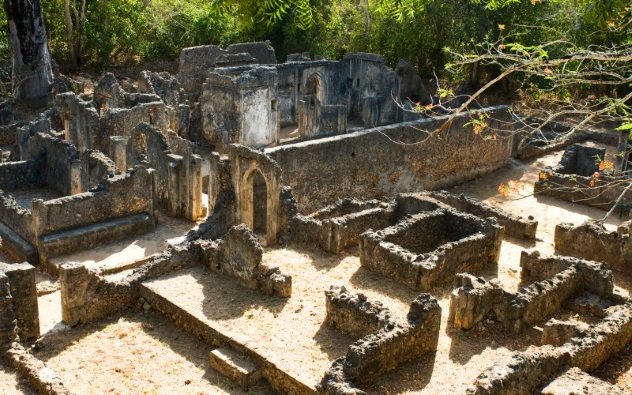 The Gedi ruins in Kenya are located deep inside a forest next to the Indian Ocean. These ruins have lessened the general belief that Africa lagged far behind other civilizations when it came to technology and advancing toward modern living. Proof of this came in the form of flushing toilets, running water, and streets built in a town that is thought to have been established in the 13th century.[9]

It seems that the Muslim inhabitants of the town traded extensively with other cultures, including China and other countries. But then the unthinkable happened. The entire town was abandoned in the 17th century for no apparent reason. Also, despite the fact that several ruins remain, including mosques, a palace, and houses, there are no written records to be found of Gedi.

Theories have been put forward that an unnamed enemy might have invaded the town and destroyed it, but there is no evidence of war among the ruins. Another theory has it that the receding Indian Ocean could have led to the depletion of water wells or that foreign explorers might have introduced the plague, leading to the death of all the inhabitants. However, there is a complete lack of evidence to support any of these theories. 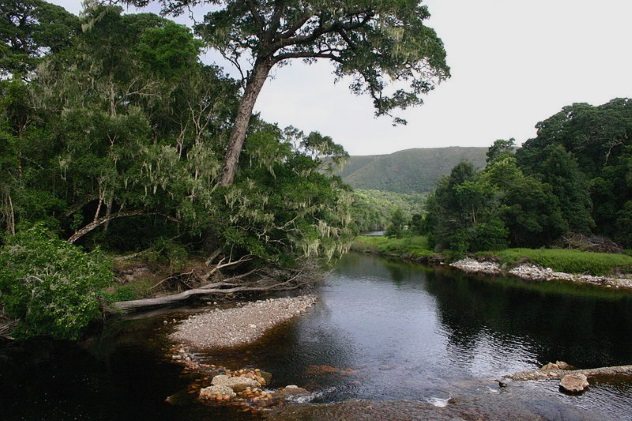 In 1969, 20-year-old Rosalind Ballingall traveled to the Garden Route in the Western Cape, South Africa, with two friends to spend a long weekend at a well-known drug hangout called the Sugar House. She then apparently decided soon after arriving that she wanted to take a walk in the nearby Knysna forest. So with a Bible under her arm, she went. And never returned.[10]

More than 24 hours passed before the young woman was reported missing, and by that time, heavy rain had washed away her tracks and any other evidence that may have helped to find her. Theories soon began to fly. Some said she was part of a cult called The Cosmic Butterfly and that she was at a drug party in the forest before she disappeared. This could have led to her losing her way while under the haze of drugs. Others believe she may have been accidentally killed by a cult member.

Other rumors stated that she somehow fled the country, with people reporting that they’d spotted her overseas. Some local sightings were also reported, but the true fate of Rosalind Ballingall remains to be uncovered.

For more mysteries from around the world, check out Top 10 Intriguing Mysteries Of South America and 10 Mysterious And Creepy Events On Mount Everest.