The United Kingdom has such an array of wonderful country parks, forests, and estates that it would be impossible to visit them all in one lifetime. As with all countries, the tales told about some of our dear forests are quite simply . . . petrifying.

One would do well to avoid some of the wooded areas on our list as they are not for the faint of heart. Whether you choose to believe these stories or not, read on to find out about 10 forests in Britain that we bet you would not enter at night. 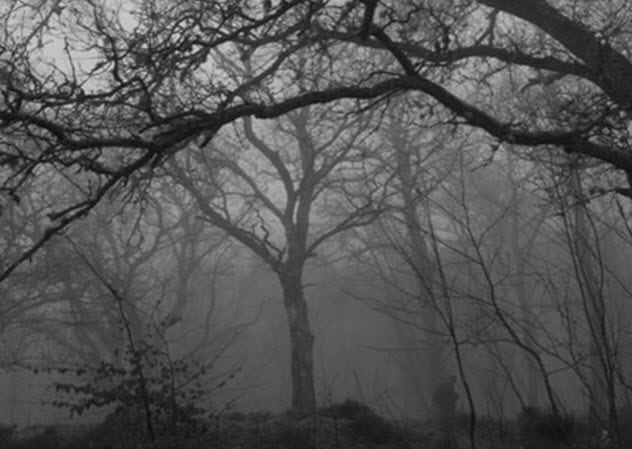 The Epping Forest is a massively sprawling area of woodland which straddles the border between London and Essex. It is somewhat known as a burial area for murder victims due to its proximity to London. In fact, many victims of the Kray twins are supposedly buried there.

As a result, the forest is notorious for ghostly sightings or contact from the other world. Some people have even reported being touched, pushed, or chased in the forest!

During a 2003 episode of Most Haunted, the crew was on the lookout for the ghost of Dick Turpin. He was a highwayman from the 18th century who used the forest as a hideout and is known to have committed at least one murder there.[1]

During the episode, the crew reported that they believed Turpin was making contact with them, further leading them off course until they had to be rescued. Other unsettling accounts come from the 1960s when people claimed they had witnessed ghostly figures emerging from a pond within the forest. The figures, some of which were on horseback, disappeared after heading toward town.

Unsurprisingly, with such a grisly history, the forest continues to mystify and frighten folks to this day. 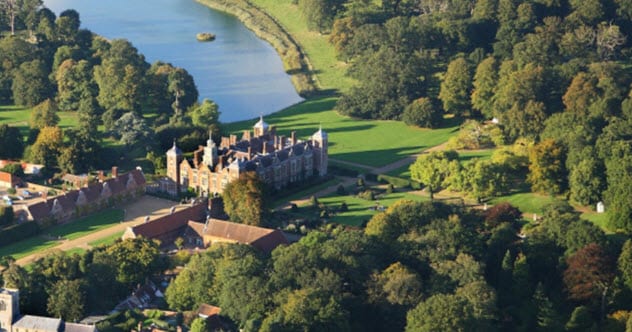 The grand estate at Blickling Hall, known as the Great Wood, is the reported site of the ghost of Anne Boleyn. Blickling Hall has been suggested as the birthplace of Boleyn, and the estate was owned by her father. Therefore, both Anne and her father, Thomas Boleyn, are said to haunt the premises.

On the anniversary of her execution on May 19, she is supposedly seen riding from the woods up to the hall on a coach drawn by four beheaded horsemen. When she arrives at the hall, her coach vanishes. It is said that she is headless.

After vanishing, the ghostly apparition is known to traverse the corridors of Blickling Hall for the remainder of the night while clutching her own head. Thomas, who was also beheaded, is said to be seen crossing bridges repeatedly in what is described as repentance for allowing his daughter’s beheading.[2]

The estate is open to the public year-round, and visitors can learn more about the infamous ghostly inhabitants. Just avoid May 19 if you can. 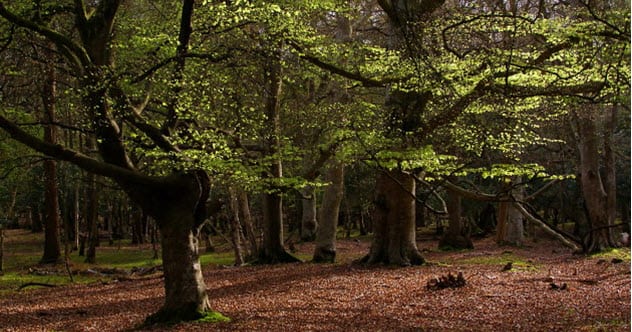 The New Forest has been described as the “most haunted part of Britain” due to the sheer number of sightings reported every year. The forest is situated in the county of Hampshire and covers a large part of the southern tip of England near Southampton.

Supposedly, the forest is home to a number of poltergeists and spirits that have multiple reported sightings. One of the more famous is that of King William II, who was killed by his own brother in the woods. He is said to inhabit the area near the Rufus Stone and is reported to have red hair. Therefore, he has been dubbed “Rufus the Red.”

On the outskirts of the New Forest near Fordingbridge, you may see a group of ghostly monks who walk the churchyard at Breamore. These monks are said to appear near stone coffins before disappearing into the misty tree line.[3]

There are many more accounts that come from the New Forest. These include tales of witches, moaning and wailing sounds, and even faces who peer through village windows! 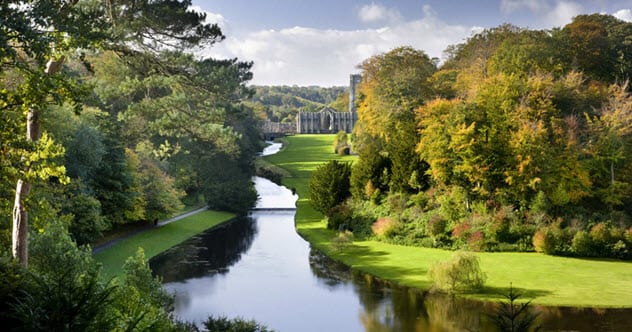 Found near Ripon in Yorkshire, Fountains Abbey is the one of the best-preserved Cistercian monasteries in the UK. Cistercians were groups of Catholic monks who were confined to monasteries, and this is one of the more famous in the world.

The abbey was established in 1132. It has long been said that the voices of the deceased monks can be heard at the Chapel of Nine Altars. The eerie presence of the ghostly monks is probably down to the fact that as many as 2,000 of them could buried under the abbey.

The grounds are also said to produce the chanting of a choir, even though this is not possible. The grounds have vast gardens and forestry. You would be forgiven for finding them absolutely terrifying, considering that there are even touted photographs of ghostly figures seen within the monastery. The nearby deer park adds to the mystifying and atmospheric effect of the whole area.[4] 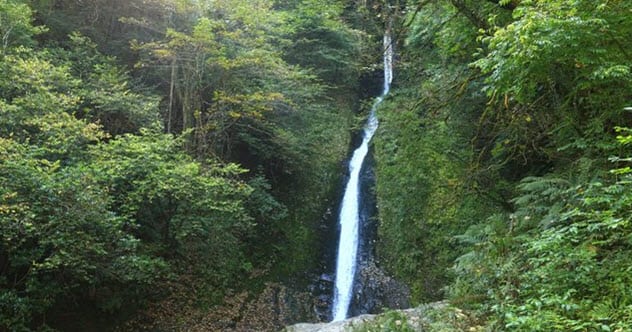 Witches Wood can be found in Lydford Gorge in the southwestern county of Devon. The wood is said to be home to a number of ghostly visitors. Parts of the walk into and through the gorge have been described as being “completely surrounded by trees,” so much so that even during the day it can feel dark.

Once through the gorge, the main feature can be reached: the 30-meter (98 ft) White Lady Waterfall. In the local area, the waterfall is said to be named after a mysterious white lady who has been seen under the waterfall. Supposedly, she wears a flowing white gown and saves people from drowning in the river.[5]

Another eerie place to visit in the gorge is Devil’s Cauldron. By all accounts, this is a series of whirlpools that can be deceptively tricky to navigate. The Devil’s Cauldron is said to be the scene of deaths or suicides due to its danger.

The village of Bradley in Lincolnshire is reportedly the home of a ghost known as the Black Lady of Bradley Woods. With multiple reported sightings over the years, it is said that she haunts the woods on the edges of the village.

The Black Lady is described as wearing a black cloak and having tears flowing down her “pretty” face. She is known to be sorrowful, and there are no reports of her harming anyone who has witnessed her eerie presence.

Some people believe they have hit her with their cars. But when they get out of their vehicles to check, nobody is in sight. Other accounts tell of her appearing in a mist form. But when these individuals follow this mystical sight, it disappears suddenly.

There are even photos available from people who have snapped pictures of the woods. As of 2019, people have seen things in the woods which they cannot explain. Some local newspapers claim that it could have been Bradley’s own “Bigfoot.”[6]

There are many origin stories of the Black Lady, including her as a raped wife whose baby was stolen or as a local spinster. But nothing definitive has been put forward. However, one thing is certain: Her spirit seems ever present in the area. 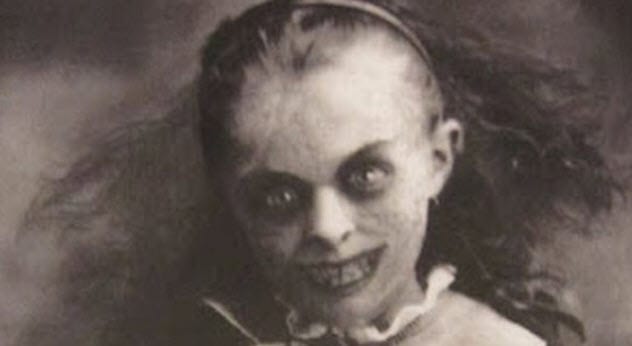 Cannock Chase is a large countryside area in Staffordshire with dense forestry and open areas. The region was made infamous in the 1960s due to a series of grisly murders of schoolgirls.

However, it has been known to be haunted before this public attention. The Four Crosses, an old public house in Cannock Chase, is said to have a high level of poltergeist activity. The sounds of children crying, the movement of objects, and strange footsteps are just a few of the occurrences there.

As for the woodlands, there is the mysterious case of the “Black-Eyed Child.” This ghastly girl was witnessed in the 1980s, and the following is an excerpt from a mother who claims to have seen her:

I turned ‘round and saw a girl stood behind me, no more than 10 years old, with her hands over her eyes. [ . . . ] I asked if she was okay and if she had been the one screaming. She put her arms down by her side and opened her eyes. That’s when I saw they were completely black, no iris, no white, nothing. [ . . . ] When I looked again, the child was gone. It was so strange.[7] 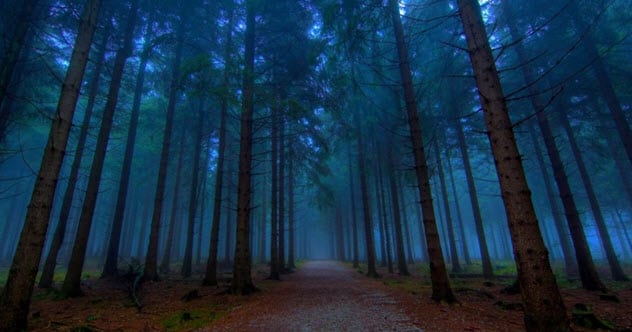 Dering Woods is situated around 3 kilometers (2 mi) from the village of Pluckley, Kent, and is known locally for its eerie stories of the paranormal. The Guinness Book of Records recorded Pluckley as Britain’s most haunted village, so it’s no wonder the surrounding forestry has this reputation.

According to tales, there are continuous screams emanating from the woods day and night. Therefore, the woods are locally known as the “Screaming Woods.” It is not clear what or where the screams come from. Paranormal hunters have long visited the area and undertaken ventures to see what lies in there.[8]

There are creepy stories about a colonel who had previously committed suicide in the forest walking around and reaching out to visitors. Other accounts depict a highwayman who actually jumps out at hikers in the woods.

There are many more accounts to be found online and reported videos of the screaming. Whether you choose to believe what you see is up to you, but the village of Pluckley and the nearby Dering Woods are certainly as creepy as you can get. 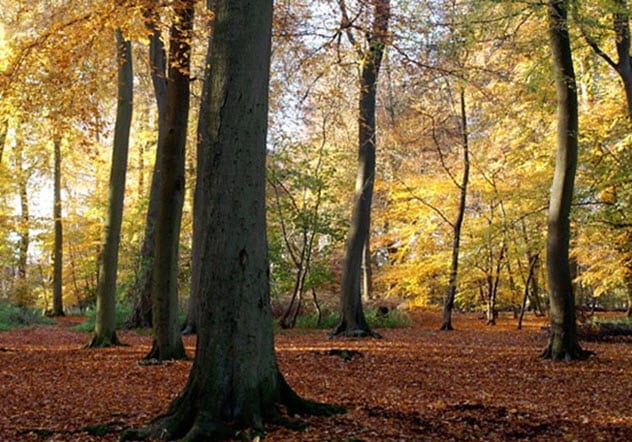 Bisham Woods are a series of wooded areas near Bisham Abbey in Berkshire. The woods used to form part of the wider Bisham Estate, which once housed Lady Hoby. She was known to be a friend of Queen Elizabeth I.

According to legend, Lady Hoby was a supremely proud and strict mother who accidentally killed her son while beating him. It was likely that Lady Hoby wanted her offspring to be as educated as those of her royal counterparts.

Due to this tragedy, her ghost is said to inhabit Bisham Abbey and the surrounding woodlands. Reported sightings include her washing her bloodied hands, looking remorseful and tearful.[9]

According to local stories, she is seen more often when there is a coronation in the UK as this reminds her of choosing the monarch over her own son. She is said to be dressed in white with a black face, doomed to sob for eternity due to the abhorrent crime she committed against her son. 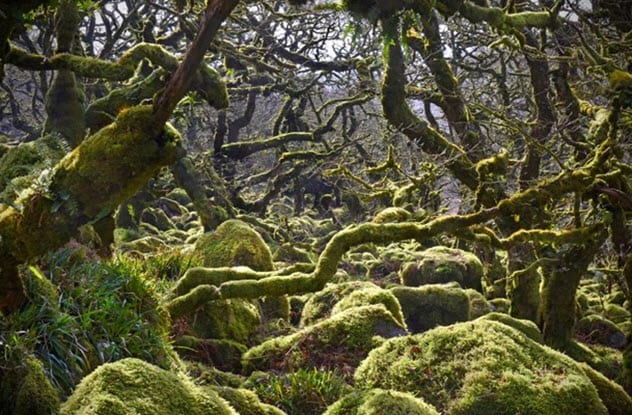 Wistman’s Wood is a high-altitude oak woods on a large moor known as Dartmoor. The woods used to be part of a larger covering of woodland on Dartmoor. A lot of the trees are covered with lichen, which makes them look creepier than usual.

This was described by Countryfile magazine as “making the trees look like writhing arms grabbing fistfuls of passing witches’ hair.” It’s also highly inaccessible to wild animals on foot, so the woodland takes on an undisturbed and overgrown look.[10]

Wistman’s Wood is continually linked with the Wild Hunt, a cavalcade of ghostly dogs or packs of hunters chasing others. Locally, the story goes that “Wish Hounds” live in the trees and hunt those at night who dare to enter. These hounds are described as spectral black, and they howl into the night.

Other stories include Hairy Hands Bridge, which is said to be haunted by an immigrant (with hairy hands) who also frequented the surrounding area. It would take a brave person to traverse these woods at night.

Read about more strange and mysterious forests on Top 10 Strange and Unique Forests and 10 Obscure Mysteries Surrounding Forests Around The World.