Allegedly, there are no known cases of Finnish people actually having fins, like some land-going whale. This is a myth and was possibly made up on the spot in lieu of a wittier introduction to this week’s list of fascinating facts, which is indeed about Finland, the land of the finless Finns.

Disappointing lack of whale people aside, Finland is an interesting place with plenty to offer. It’s the land of lakes, heavy metal, and big, big words. And, most importantly, there’s beer.

10 Finnish Has The Longest Palindromic Word 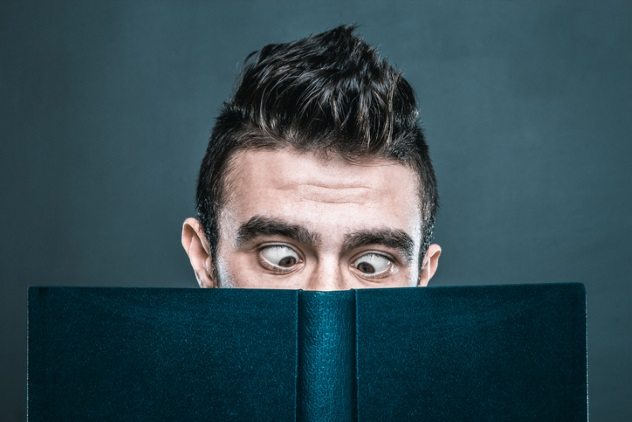 Guinness World Records requires that palindromic words—ones that read the same forward and backward—must be in common use to count. Listverse is unsure how many dealers in caustic soda there are in Finland, but those happy saippuakivikauppias fellows are considered common enough to take the record.[1]

Some say that saippuakippokukkakivikakkukoppikauppias is a longer palindrome, which is perfectly true, but Guinness does not recognize that a “merchant of stones, that are used with cakes made out of lye flowers” is used often enough, if at all. What would the stones that are used with lye flower cake even look like? In any case, what we can say for certain is that tongue-twister aficionados and fans of the letter “K” should feel quite at home in Finland.

9 The Land Of Far More Than A Few Lakes 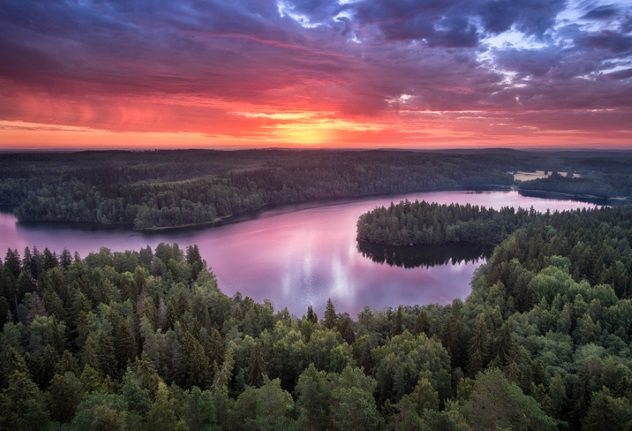 At some point in the past, Finnish people mastered the understatement or let the mask slip and revealed that they are all numerically illiterate. Finland bears the nickname “Land of a Thousand Lakes,” which is wrong, Finland. Finland actually has one lake for every 26 or so citizens, which means there are, in fact, roughly 187,000 lakes—making up around ten percent of the total land area of the nation.[2]

The lakes were formed during the Ice Age by preposterously huge glaciers smashing the Earth with the power of cold water that changes to a solid. Through a little-understood phenomenon called “melting,” the glaciers somehow disappeared, leaving behind dents in the Earth that then filled with water. And that’s how Finland got so many lakes. Thanks to this abundant resource, the interior of Finland is able to be well-irrigated for farming and also provides exploitable underwater mining seams and a booming tourism industry.

8 The Largest Archipelago In The World 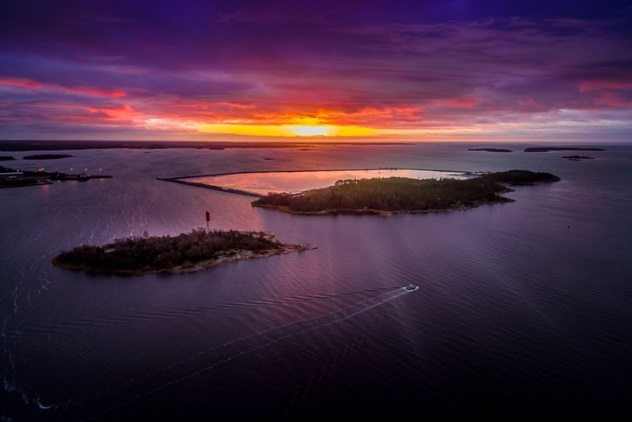 Sticking with the natural formation of things, if you took a blue sheet and then crumbled some dry bread (or stale toast perhaps) onto it, you would make quite a good map of the Finnish archipelago, which stretches away from the mainland toward Sweden. So many islands are there in this archipelago that even the Finns cannot agree exactly how many there are, but the general consenus is more than 40,000.[3]

Naturally, most of these are incredibly small outcrops which jut above the water just a few feet—and you will need a boat and plenty of warm clothing if you fancy an excursion. Located a mere half an hour’s drive from Finland’s former capital Turku, the little village of Herrankukkaro is a departure point for most points west. There are many hamlets that survive on archipelago tourism and fishing out on the larger islands populated by a few hardy souls, accessible only by boat. File this one with “Good Places To Hide During The Zombie Apocalypse.”

7 A National Day Of Failure 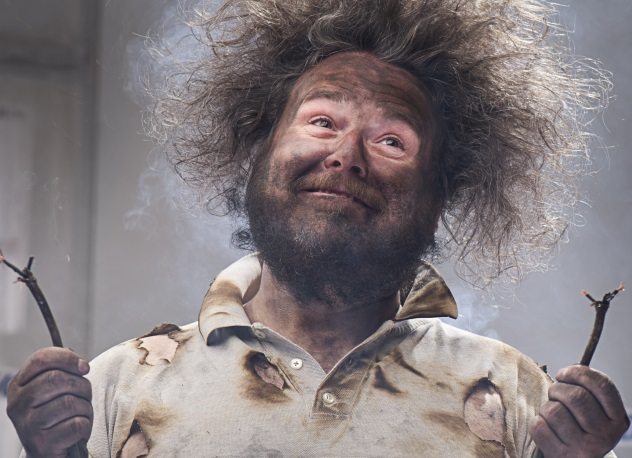 Recognizing that you suck at being a human and are destined for alcoholism, premature aging, and a career as a writer for Listverse is a hard pill to swallow. Not everyone handles it with grace. Recognizing this problem, the first Day for Failure was held in 2010 by Finnish university students. In this now annual event, many actually successful people have co-opted the celebration of loserdom, sharing their stories of failure that tripped them up on the path to being well-paid and oversexed. Despite this heinous appropriation of suckiness, the Finns don’t seem to mind.[4]

Surprising for an overachieving sort bred by a tough environment and a culture that frowns on failure in general, the Finns have taken quite well to the idea of looking and laughing at their own pratfalls and missteps. According to the organizers, “Encouraging people to try new or difficult things without worrying about the consequences gives them the confidence to step out of their comfort zone and enjoy an activity.”

6 Carry Your Wife, Win Her Weight In Beer

In fact, the sport of Wife-Carrying doesn’t even require you to carry your own wife or even to be married. The sport references an old and better time when it was Finnish custom to simply carry off a new wife from a neighboring village. Having successfully avoided installing Tinder into their culture, the Finns celebrate their more civilized wooing techniques by holding an annual Wife-Carrying World Championship.[5]

Despite being dominated in recent years by Estonians—much to the chagrin of the Finn—the inventors of the sport do have some legends of their own. Taisto Miettinen and Kristiina Haapanen tackled the 253-meter (830 ft) course in a single minute, leaping hurdles and negotiating a water pool along the way in 2012 to defend their title. Striking the perfect balance between the speed and strength of the man and the optimum wife weight to maximize chances of success and a decent alcoholic reward appears to be key.

5 Give Your Wife The Right To Vote, Lose All Your Beer 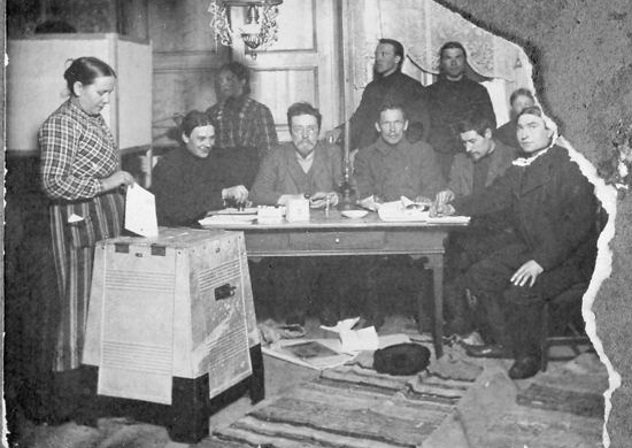 Photo credit: National Board of Antiquities

Perhaps it was a mistake to grant suffrage after all. That certainly would be a question that crossed the minds of many a Finnish man between 1919 and 1932, a period of heavy prohibition on alcohol. Given the preposterously cold winters, it can be safely assumed that these 13 years were the worst in human history.[6]

But what has this got to do with women voting? Well, progressive Finland learned an early lesson. Finnish women were the first in Europe to get the vote, and one of their very first acts was to pass temperance laws to sober up their husbands. The result was kieltolaki (“ban law”), a ban on alcohol that resulted in an entirely new career path of bootlegging, “fortified” teas, and secret hooch houses. A full 85 percent of crime in this period derived from resistance to the alcohol law. The lesson? Let men drink. They’re going to do it anyway, so just get over it.

4 Most Metal Country Of All 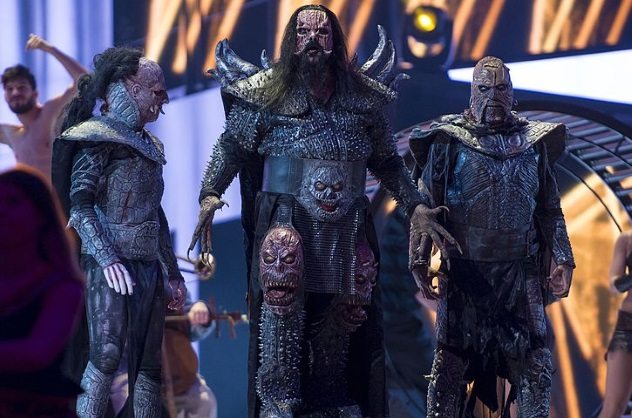 According to some, Finland is “the only country in the world where metal is mainstream,” which may come as a shock to people who are currently running around Swedish forests wearing corpse paint and burning churches. Sorry guys, you are still a fringe. Not so in Finland! Everybody loves metal. Kids love metal and have a dinosaur-themed band catering to the very young, talking about the most metal pursuits, like eating cookies and drinking milk.[7]

With 53.2 metal bands per 100,000 people, that means that every single metal band in the nation should claim a pro rata share of 1,879.6 headbanging fans, provided that every Finn, wom-Finn, and child listens to metal, as Satan intended. That is quite a high benchmark of quality, so if you are a Finnish metal band and have fewer than 1879.6 fans, you suck according to flawless science. You might also remember Lordi, who won the Eurovision Song Contest in 2006 by dressing up as monsters and shredding flying V guitars. Brutal. 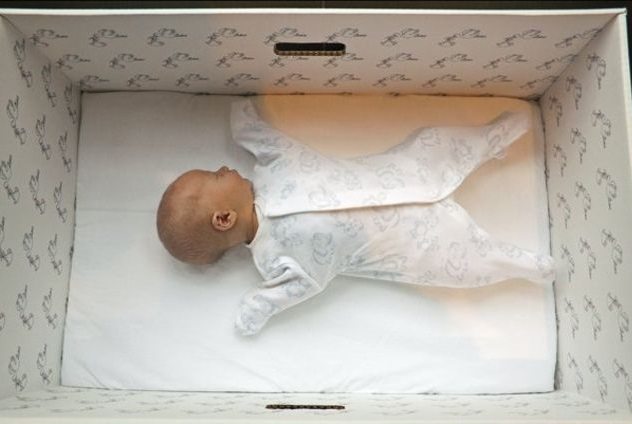 Contrary to the evidence that points to all socialists being evil baby-eating monsters, since the 1930s, the Finnish state has been providing new mothers with a gift box. The box today, like then, is made from cardboard and comes replete with useful items like winter wear and such. The aim at the time was to lower the infant mortality rate, which has been successfully achieved.[8]

In the 1930s, 65 out of 1,000 babies died in Finland, but thanks to this program, which had the double effect of encouraging expectant mothers to visit their doctor in order to acquire the gift box, this number has dropped to just 1.7 in 2015. Even so, the best/cutest part about this effort is that in Finland, the box that you receive your maternity package in doubles as the first crib for your baby. Long before your child tosses expensive gifts aside to play with a box, they will sleep soundly inside one. 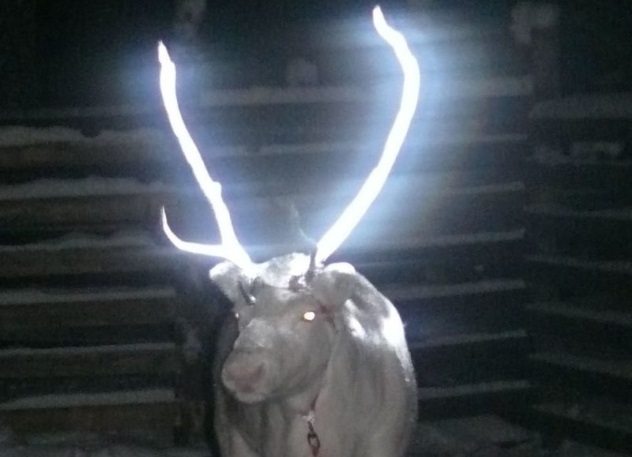 Rudolph is obsolete thanks to advanced Finnish spray paint technology. In an effort to prevent the loss of some of the 4,000 reindeer killed in car accidents on Finnish roads, the Reindeer Herder’s Association of Lapland has tried spray-painting antlers of reindeer with reflective paint.[9] Anne Ollila, the executive director of the Reindeer Herders’ Association, said, “The goal is specifically to prevent road accidents. The spray is being tried on their fur, but it is maybe more effective on their antlers because the reflection can be seen in every direction.”

Whether this is superior to replacing the noses of reindeer with some form of bright-red glowing lamp or perhaps gene-hacking reindeer to produce Rudolph clones is not a question the Association has answered or probably considered on ethical grounds. Regardless of their poor commitment to a more Christmas-y Lapland, the experiment continues to make reflective antlers common. With 200,000 reindeer in Lapland alone, the Reindeer Herder’s Association had better get the bulk paint orders ready.

1 They Can See Into The Future 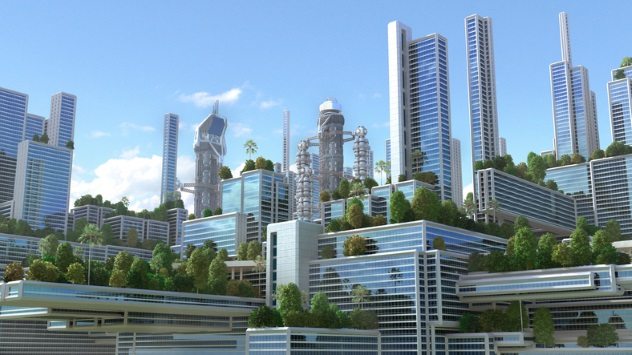 Unlike most governments, which occupy their time with blaming Russians and oppressing the rights of their citizens, the Finns look a little further down the line. In Finland, the government is required by law to produce an official review of the future every parliamentary term, and the nation was the first to offer a degree in future studies. Some may suspect that the Finns know exactly when we will get flying cars, but it appears those practical suomalaiset used their foresight to develop from one of the poorest countries in Europe to one of the most successful ones in the world.[10]

“The core of our foresight expertise is in bringing key actors and stakeholders together through co-creation,” said Aleksi Neuvonen, head of research at Demos Helsinki. Today, this mentality is one of Finland’s key exports—the creativity and expertise of the Finn is viewed internally as a “soft-power,” enabling the Finnish to “solve wicked problems and benefit humanity.” Which is nice.

Ash is Editor of Republic Standard.