What was Bob Marley’s favorite country? Yemen! It’s funnier if you say it out loud while stoned. Trust me.

Yemen is an ancient country on the very southernmost edge of the Arabian Peninsula, bordering Saudi Arabia, unsurprisingly. The land has changed hands dozens of times over the centuries as empires wax and wane.

Even today, it is the site of a vicious turf war between the Sunnis of Riyadh and the Shia of Tehran. Add to this the many different religious sects and tribal loyalties, and you can see why Yemen has what can only be described as one of the most complicated political histories on the planet. 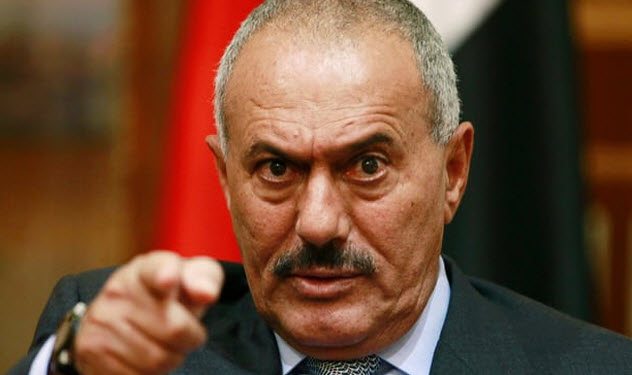 The permanently resident President Ali Abdullah Saleh became a permanent resident of a grave plot in December 2017. After being forced from the throne he had occupied for 33 years during the 2011 Arab Spring, Saleh desperately wanted his job back. After all, he could have kept the job for life, in theory.

To reclaim power, Saleh decided to join up with the Iranian-backed Houthi rebels against whom he had fought six wars—and it worked, for a while. His successor was forced to flee to Saudi Arabia, and for a short time, things were quite good for Saleh. He once described his job as “dancing upon the heads of snakes.”

Then, of course, he remembered that the Houthis are completely barking mad tribesmen who kill for fun and are high on khat all day. Saleh realized that he was right to try and kill every last mother’s son after all—and called the Saudis back in.

The Houthis took exception to being jilted like an ugly pregnant bride at a shotgun wedding with all the grace you would expect from high people with AK-47s. They hunted Saleh down as he tried to escape and shot him to death. So passed the first—and to date, the only—democratically elected president of Yemen.[1] 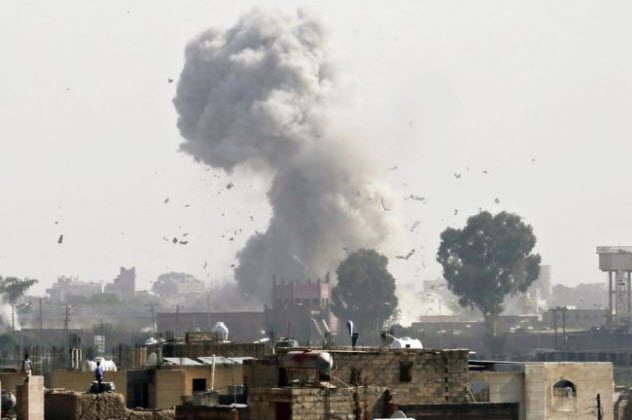 We mentioned the proxy war already, but it bears digging into exactly who is fighting whom. While on the surface one could consider the Yemen conflict to be a primarily sectarian one of Sunni versus Shia, Saudi versus Iranian, the real picture is far more complex.

Many Sunni Yemenis actually sided with the Houthi rebels, so narked off with the post–Arab Spring fiasco were they. Complicating matters are those cheeky lads from Al-Qaeda in the Arab Peninsula (AQAP) who are desperate to show that they are just as good at suicide bombing as any 15-year-old ISIS recruit.

So on the one side, you have the Houthis, whose battle standard bears their motto: “God is great, death to America, death to Israel, God curse the Jews. Victory for Islam.” On the other side, you have AQAP, who don’t do so well with the snappy slogans but did blow up the USS Cole in 2000.[2]

They have the backing of various Sunni interests in the Middle East but not the Sunnis in Saudi Arabia, whom AQAP want to kill quite a lot. The Houthis also want to kill the Saudis. But despite shooting missiles at Riyadh, they have been unsuccessful so far.

On the other-other side stand the Yemeni government forces backed by Morocco, Jordan, the USA, Saudi Arabia, the United Kingdom, and the myriad government-allied tribes who are—for the moment—interested in killing the Houthis.

Basically, trust no one and do not go to Yemen right now.

8 The Only Arab Communist Country 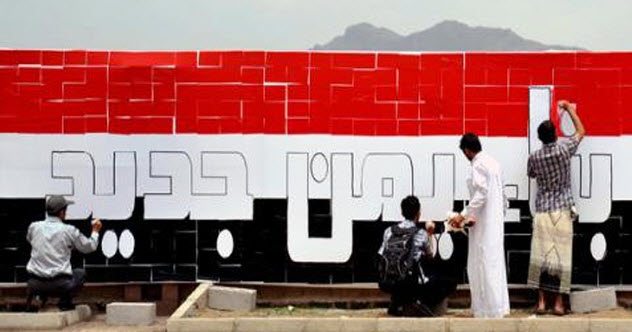 Communism and Islam make unlikely but surprisingly common bedfellows. Once the tutelage of Messieurs Marx and Engels has been shorn of that inconvenient exhortation to atheism, many groups across the Middle East have taken a stab at using the immortal science in conjunction with the faith.

It is admittedly a very hard sell. Still, communists in South Yemen actually pulled off a government for around two decades until the country unified.[3]

Not being able to exert control over the reunified Yemeni people, the socialists decided to have a civil war instead in 1994. This war, fought against that old dog Saleh, was a terrible idea.

Not only was Saleh backed by the Americans (who can always be relied on to arm people fighting communists), but this war took place where the only communist allies the South Yemenis could call on were Cuba and North Korea. Both gave their verbal solidarity against the imperialists.

A few months and 6,000 or so dead communists later, President Saleh had a peaceful and unified nation—for a little while. 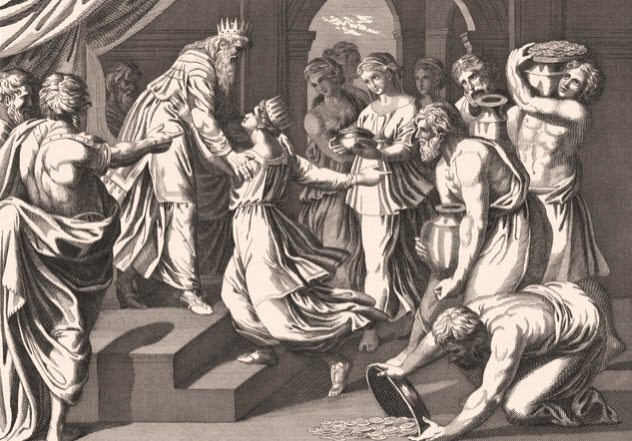 According to the Quran, the queen of Sheba (“Saba” in the book) lived in Yemen around the 10th century before Christ. King Solomon invited her to visit him and convert to Judaism, which as a strict Sun- and Moon-worshiping kind of gal perplexed the queen greatly.

In a verbatim transcription of what actually happened, the story tells us that Solomon used a djinn to transport Bilqis—for that was her name—and her throne all the way from Yemen in a trice.

There is another possible claimant on the throne of Sheba from the period when Queen Makeda from the city of Axum went to see Solomon. Being a particularly sexy Jewish king, he impregnated her on the spot, giving rise to the lineage of Solomonid kings that ended with the Haile Selassie (of Rastafarianism fame) in 1974.

Still, this story ends up in Ethiopia rather than Yemen, though both modern countries were part of the same empire at the time and still share cultural similarities to this day.[4] 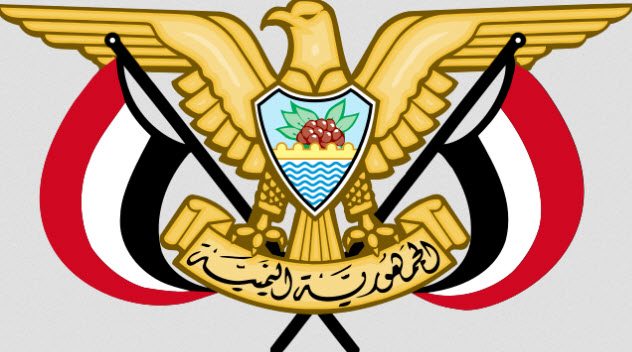 The next parliamentary elections, which were due in 2009, have been postponed twice. In 1999, Saleh was directly elected as president for the first time. He competed against an obscure member of his own party, paid his opponent’s election expenses, and won with 96.3 percent of the vote.[5]

5 The Worst Place To Live As A Woman 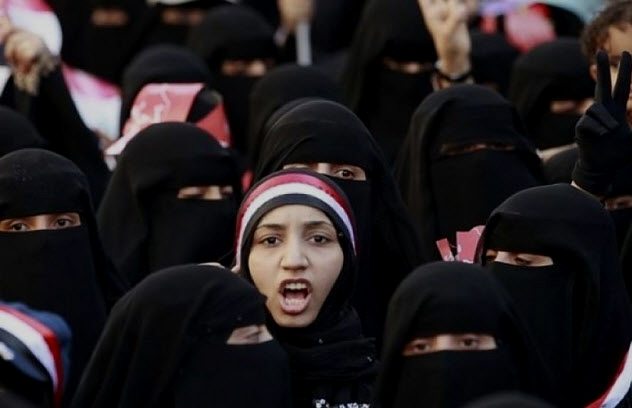 It is not easy being a Yemeni woman. Beyond the oppression of women that is inherent in Islam, there are socioeconomic and cultural factors at play as well. Twenty-four percent of Yemeni women have suffered female genital mutilation (as many as 69 percent in coastal areas), and only one-third of all women in the country are literate (although some literacy estimates are higher).[6]

According to the UN, half of Yemeni girls are married before they are 18 and 15 percent are wed before they are 15. Within their marriages, Yemeni women do not have equal rights to custody, divorce, or inheritance. They also require a husband or father’s permission to travel or get a passport.

Legislation was in the process of ratification in the Yemeni parliament. But, you guessed it, the war put paid to the bill and halted the long process of changing the cultural norm of slicing up your daughter’s vagina.

If anyone stands to gain from the complete reformation of Yemeni society, it is the women—provided that the reformation is not a plunge into more extreme and darker interpretations of Islam and the role of women in society.

4 The ‘Manhattan Of The Desert’ Features Mud Skyscrapers 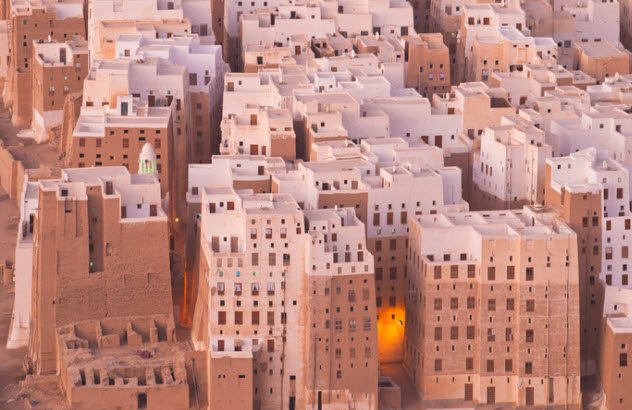 How tall do you think the tallest building you could build from mud would be?

It is probably not 11 stories tall like some buildings in the Yemeni city of Shibam are. More to the point, Shibam has had skyscrapers like these for 500 years, when most Western countries were still struggling with not dying from dirty water. Shibam was listed as a World Heritage Site in Danger when, you guessed it, the civil war broke out.

Still, it’s not just Saudi Arabia, Al-Qaeda, and ISIS who are a threat to this bizarrely beautiful town of 7,000 people. Erosion and typhoon weather systems are an ever-present danger to the mud bricks and foundations, necessitating constant maintenance.[7]

The style of building itself was developed to protect inhabitants from attacks by the Bedouin. So not much has changed except that the Bedouin are now flying F-16s. 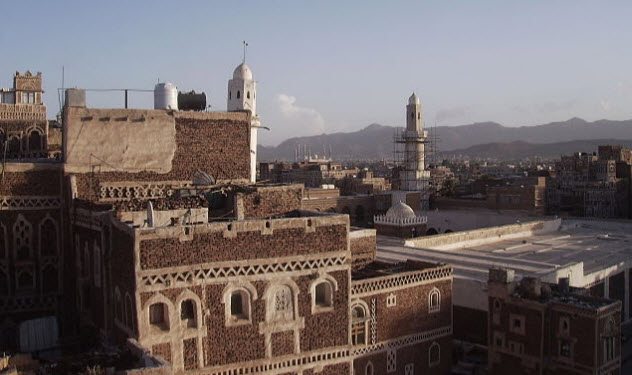 The majority of Yemen’s population is Muslim, but it is split into various branches of Islam—mainly Sunni or Zaidi Shia. The divisions between the Sunnis and the Shia are based on a long-running religious conflict that started as a dispute about the Prophet Muhammad’s successor.

While Shia Muslims believe that the prophet’s cousin should have filled the role, Sunnis support the choice of Muhammad’s close friend and adviser, Abu Bakr, as the first caliph of the Islamic nation.

Unlike most places in the Arabian Peninsula, Yemen has historically been quite a tolerant place for other religions—even with the split between Sunni and Zaidi Shia being a point of contention during times of war. For example, though all Houthis are Zaidis, not all Zaidis are Houthi. So the tribe does not speak for the whole religion, and vice versa.

When tribal politics does come to the fore, religion apparently takes a step back.[8] 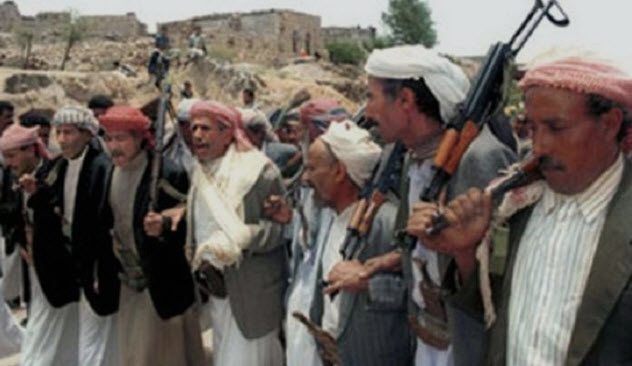 “I define tribal as being those whose primary identification is tribal, i.e., if the sheik calls them to war, they come to his aid. And that applies to about 20 percent of the population. The other 80 percent are either urban or peasants, and they are non-tribal.”[9]

What does this mean? Beyond the conflict between the Houthis and the Yemeni government are a great many people who would like to be left alone and not be bombed. By and large, the tribal folk have suffered historically from being ineffective fighters when faced with competent opponents. Yet, they are quite adroit at guerrilla warfare.

Perhaps this mismatch of skills is a reason why the civil war is still ongoing, with the government not quite able to pin down and finish off the tribal warriors. 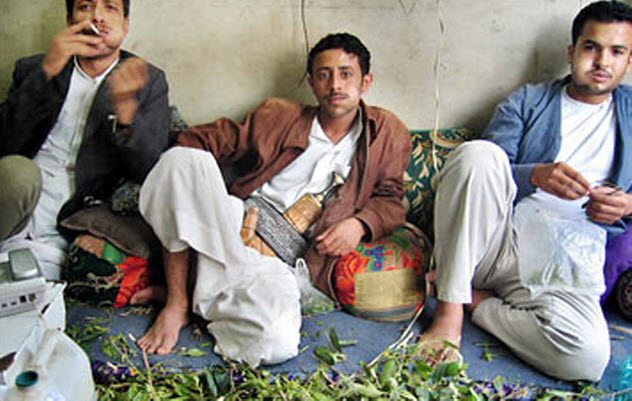 Ninety percent of men and 1 in 4 women in Yemen are estimated to chew khat leaves, which leads to a quite startling experience for the newcomer. Imagine setting foot in Yemen and then realizing that most people have a mouth full of leaves.

Saliva breaks down the cells of the plant and releases what is in effect a mild amphetamine into their bloodstreams. “Khat is alcohol for Muslims,” says the head merchant at the khat market, where bags are sold for US$5 for a daily supply.[10]

Khat is, therefore, an expensive addiction in a country where 45 percent of people lived below the poverty line before the war, which has led to serious food shortages. With most families spending as much on khat as on food, most of the arable land in Yemen has been turned over to khat cultivation. Although this produced more revenue than crops alone, it proved to be a serious problem when the violence began.