Serial killers are known to be lethal with weapons in their hands, but they can also incite fear with their pens as the following creepy letters have proved. They were written by some of the most notorious and twisted killers in history.

The letters became tools to taunt the police, make demands, hurt the victims’ families, or make chilling confessions. Each one was likely written with the same hand that the killer used to slay his victims. 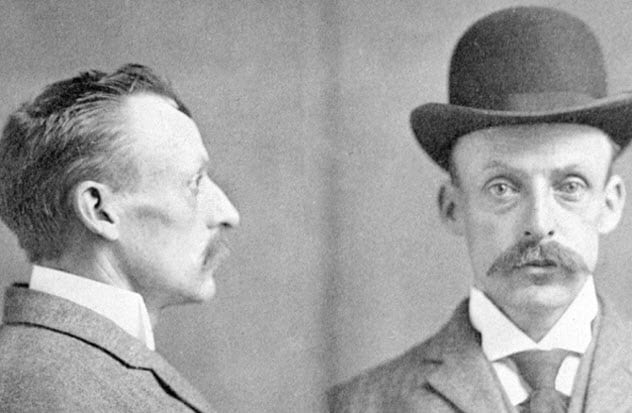 Creepy serial killer Albert Fish was known as “The Boogeyman” as he preyed on small children and was a suspect in at least five brutal child murders. In 1928, he kidnapped 10-year-old Grace Budd. Then he murdered her and cannibalized her remains at an abandoned house in Westchester County, New York.

Afterward, Fish sent a letter to Budd’s mother describing in horrifying detail how he murdered the young girl. He wrote:

When all was ready, I went to the window and called her. Then I hid in a closet until she was in the room. When she saw me all naked, she began to cry and tried to run downstairs. I grabbed her, and she said she would tell her mama. How she did kick, bite, and scratch. I (then) cut her in small pieces so I could take my meat to my rooms, cook and eat it.[1]

The letter became the downfall of Fish as police were able to trace the killer from the unique branding on the envelope he had sent. 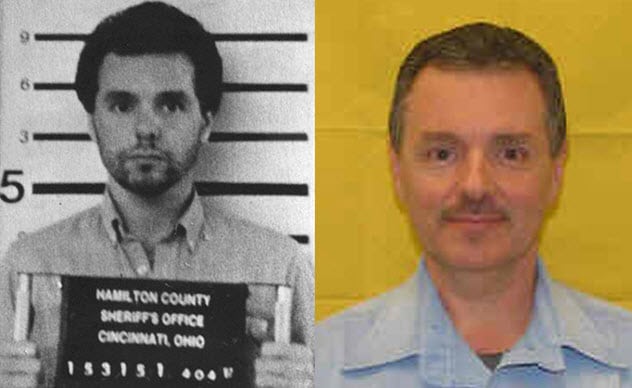 Donald Harvey was a former orderly in hospitals in Ohio and Kentucky during the 1970s and 1980s. During this time, he killed an estimated 37 patients. However, the real victim count is believed to be much higher as Harvey claimed the figure is closer to 70. His killing spree “began by accident” after hooking up a patient to an empty oxygen tank, and then he just couldn’t stop.

The cold-blooded killer never showed any remorse for his crimes. In one interview, he said, “Some of those (patients) might have lasted a few more hours or a few more days, but they were all going to die. I know you think I played God, and I did.”

In a chilling letter that he wrote behind bars, the serial killer joked, “Lord, Grant me the serenity to accept the things I cannot change, change the things I can, and the wisdom to hide the bodies of those people I had to kill because they pissed me off.”[2] 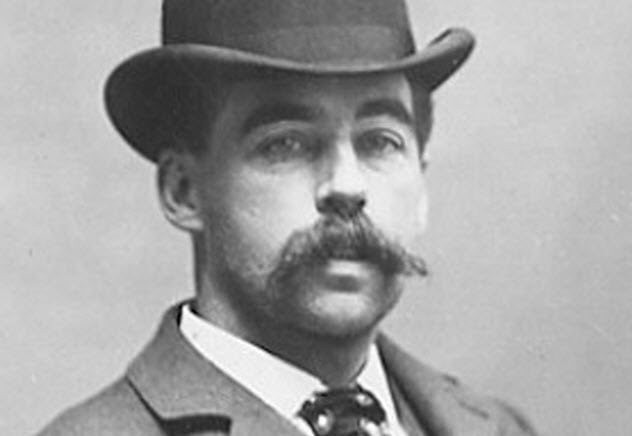 Dr. H.H. Holmes was a twisted serial killer who built a “Murder Castle” in Chicago with the intention to kill as many victims as possible. The 100-room building had long, winding corridors that would disorient victims. It also had trapdoors, false walls, and gas chambers. Holmes then sold the cadavers to medical research institutions, and the organs were traded on the black market.

On April 11, 1896, he wrote a full letter of confession to the Philadelphia North American newspaper:

I was born with the devil in me. I could not help the fact that I was a murderer, no more than the poet can help the inspiration to sing. I was born with the “Evil One” standing as my sponsor beside the bed where I was ushered into the world, and he has been with me since.[3]

One month later, he was hanged at Moyamensing Prison for his crimes. 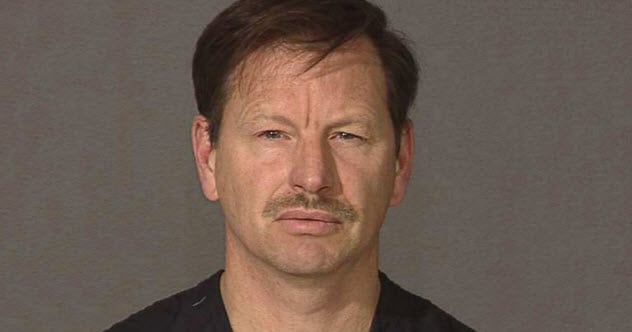 Gary Ridgway became known as the “Green River Killer” after he confessed to murdering 48 sex workers and runaways in the state of Washington during the 1980s and 1990s. Ridgway said, “I picked prostitutes because I thought I could kill as many of them as I wanted without getting caught.”

In 1984, he wrote a letter about the murders titled “what you need to know about the green river man” and sent it to the Seattle Post-Intelligencer. In disturbing detail, the killer wrote about necrophilia and cutting off the fingernails of victims before signing off as “callmefred.”[4]

Police claimed that it was a “brazen attempt to throw off investigators.” At the time, they did not follow up on this key evidence. Ridgway’s game of playing cat and mouse with the police finally came to an end in 2001 when DNA evidence connected him to the murders. He was spared the death penalty as part of a plea bargain where he disclosed the locations of the missing bodies. His plea bargain raised his murder convictions to 49. 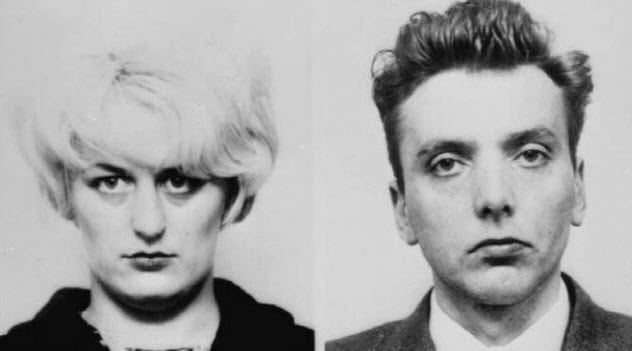 The “Moors Murderers,” Ian Brady and Myra Hindley, killed five children between 10 and 17 years old in the early 1960s. Three graves were discovered on Saddleworth Moor in Manchester, England, but the killers never revealed the final resting place of their other victims. Hindley claimed that she was under Brady’s spell and that she took part in the crimes against her will. However, he tells a different story.

In one letter that he wrote from prison to a journalist, Brady explained:

Hindley has crafted a Victorian melodrama in which she portrays herself as being forced to murder serially. We both habitually carried revolvers and went for target practice on the moors. If I were mistreating her, she could have shot me dead at any time. For 30 years, she said she was acting out of love for me; now she maintains she killed because she hated me—a completely irrational hypothesis. In character, she is essentially a chameleon, adopting whatever camouflage will suit and voicing whatever she believes the individual wishes to hear. She can kill, both in cold blood or in a rage.[5]

5 The Axeman Of New Orleans 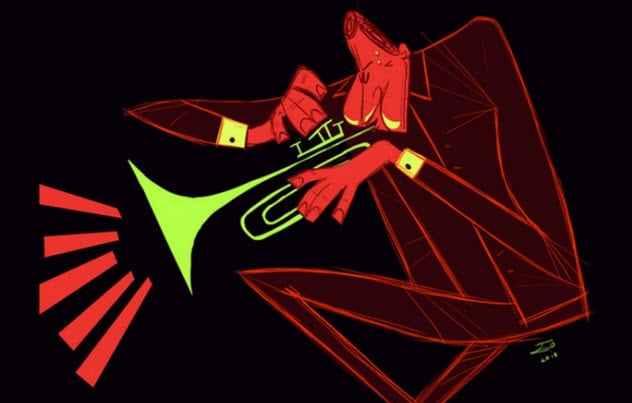 The Axeman of New Orleans is an unidentified serial killer who butchered six victims and injured 12 others in 1918 and 1919. A letter believed to be from the killer was published in newspapers and claimed that he would spare anyone who was playing jazz music.

I am very fond of jazz music, and I swear by all the devils in the nether regions that every person shall be spared in whose home a jazz band is in full swing at the time I have just mentioned. If everyone has a jazz band going, well, then, so much the better for you people. One thing is certain and that is that some of your people who do not jazz it out on that specific Tuesday night (if there be any) will get the axe.[6]

Then the murders suddenly stopped as quickly as they had started. The crimes remain unsolved to this day. 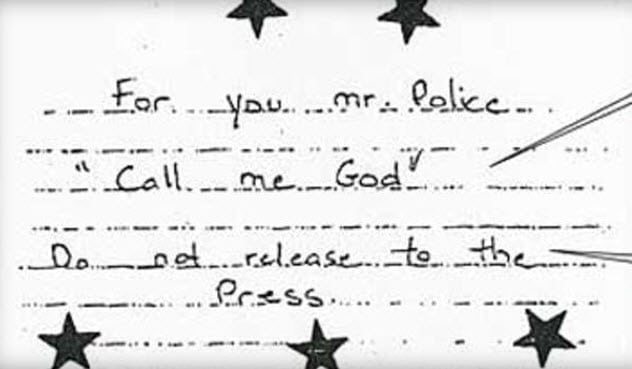 Over a three-week span in 2002, the “Beltway snipers” killed 10 people in the states of Maryland and Virginia. (Another seven individuals were murdered elsewhere.) John Allen Muhammad and Lee Boyd Malvo shot each victim with a single bullet fired from a distance. Then the killers vanished.

They wrote down their demands in a three-page letter with a cover note that read, “For you, Mr. Police. Call Me God.” They demanded $10 million in “unlimited withdrawals” or the lives of children in the area would be threatened. The letter was left pinned to a tree outside a restaurant where the snipers had shot and wounded a man who was out to dinner with his wife.

They were eventually caught when one of the snipers mentioned an unsolved murder in Montgomery, Alabama, in a traced phone call. Authorities were able to link both of the murders with fingerprints and make an arrest. Muhammad was put to death by lethal injection, and Malvo received a life sentence.[7] 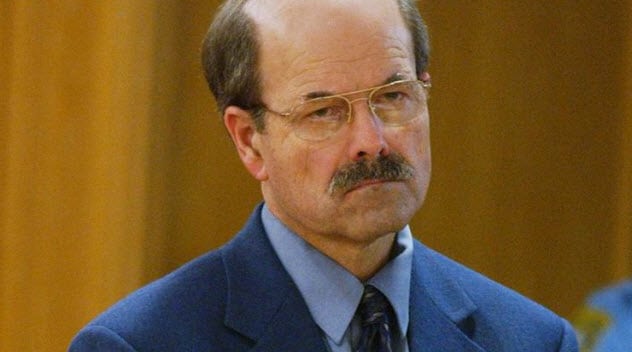 Dennis Rader gave himself the title “BTK” after his chilling murder method of “Bind, Torture, Kill.” Between 1974 and 1991, Rader killed 10 people in Sedgwick County, Kansas, with gaps in between to dedicate more of his time to being a family man. Rader believed that he could outwit the police, so he sent them taunting letters.

One of his poorly written letters read:

When this monster enter my brain, I will never know. But, it here to stay. Society can be thankfull (sic) that there are ways for people like me to relieve myself at time by daydreams of some victim being torture and being mine. It a big compicated (sic) game my friend of the monster play putting victims number down, follow them, checking up on them waiting in the dark, waiting, waiting. Maybe you can stop him. I can’t. He has areadly (sic) chosen his next victim.[8]

He signed it, “Yours, Truly Guiltily, BTK.”

He was caught after he upgraded his technology and sent his letters on a floppy disc, which was immediately traced to him. 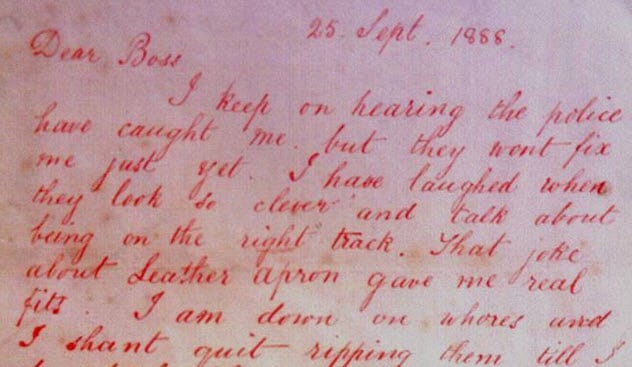 The terrifying case of Jack the Ripper still haunts London today. In 1888, the chilling serial killer targeted impoverished areas around Whitechapel. The bodies of his victims were discovered with their throats cut open and with abdominal mutilations.

On September 27, 1888, the Central News Agency received this letter (which they believed was a hoax):

The next job I do, I shall clip the lady’s ears off and send to the police officers just for jolly, wouldn’t you. Keep this letter back till I do a bit more work, then give it out straight. My knife’s so nice and sharp I want to get to work right away if I get a chance. Good Luck. Yours truly, Jack the Ripper.[9]

Three days later, a double murder took place. True to his word, the ripper cut a portion of the earlobe off his victims. The case has never been solved. 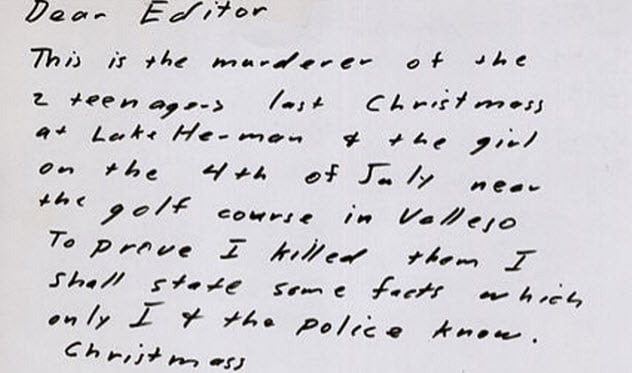 In the late 1960s, the Zodiac Killer targeted four men and three women between the ages of 16 and 29 in Benicia, Vallejo, Lake Berryessa, and San Francisco. Five victims were killed during his reign of terror. He sent several letters, including four cryptograms, to the local Bay Area press. It’s believed that his true identity will be revealed if the ciphers can be decoded.

Only one of the ciphers has ever been solved.[10] Schoolteacher Donald Harden and his wife, Bettye, cracked the code which reads:

I LIKE KILLING PEOPLE BECAUSE IT IS SO MUCH FUN IT IS MORE FUN THAN KILLING WILD GAME IN THE FORREST BECAUSE MAN IS THE MOST DANGEROUE ANAMAL OF ALL TO KILL SOMETHING GIVES ME THE MOST THRILLING EXPERENCE IT IS EVEN BETTER THAN GETTING YOUR ROCKS OFF WITH A GIRL THE BEST PART OF IT IS THAE WHEN I DIE I WILL BE REBORN IN PARADICE AND ALL THEI HAVE KILLED WILL BECOME MY SLAVES I WILL NOT GIVE YOU MY NAME BECAUSE YOU WILL TRY TO SLOI DOWN OR ATOP MY COLLECTIOG OF SLAVES FOR MY AFTERLIFE. EBEORIETEMETHHPITI.

10 Horrifying Hospitals You Never Want To Stay In