Mummies are not just from Egypt. Sometimes, they surface in places like New York and bring plenty of oddities along for archaeologists to chew on.

Elsewhere in the world, cemeteries reveal unique glimpses into the fears of ravaged communities or set straight long-held historical misconceptions. A few recent graves also turned up things never before seen by the expert eye, and one skull may even help to claim a continent. 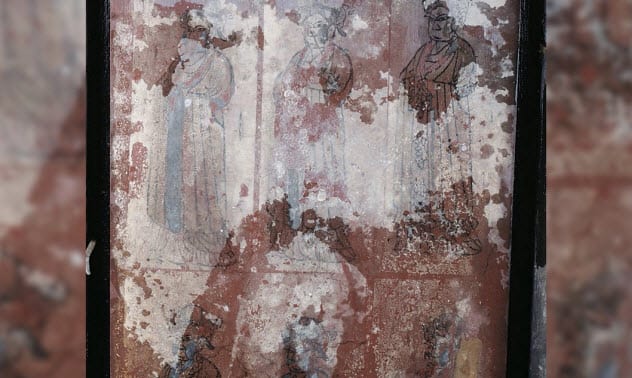 In 2014, two burials were discovered in China, but the news only hit English publications in 2018. Located at Tieguai Village, one tomb was rendered almost empty by looters. The tomb next to it, however, was untouched.

Inside was a remarkably well-preserved skeleton of a high-ranking woman. Amazingly, she died 900 years ago and her coffin was waterlogged. Despite the ravages of time and bad conditions, even her nails and hair remained. In fact, her hair was still adorned with precious metal pins.

The casket was inside a second coffin, but it was the inner one’s surface that gave researchers a glimpse of her life. Inscriptions called her the “Grand Lady” who lived in “Ankang Commandery.” Her actual name was too obscured to determine with certainty, but images showed the same woman dressed in different outfits.[1]

The skeleton showed the same penchant for fashion. Silver bracelets, a pendant, and embroidered shoes graced the body. There were also coins and food inside the coffin. The most fascinating item among the many grave goods was a miniature house. Made of wood, it had rooms and a courtyard, all exquisitely furnished. 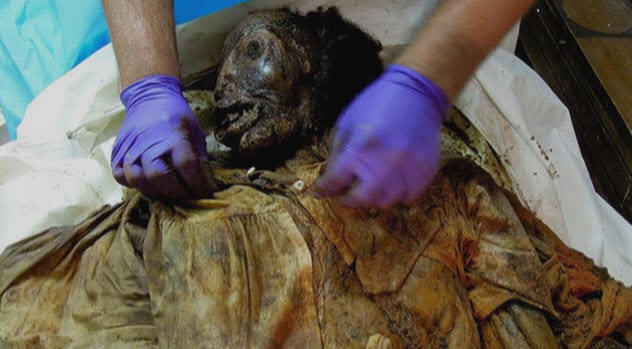 In 2011, a construction crew working in New York City found a body in Queens. The remains belonged to an African American, and at first, authorities suspected that she was a recent murder victim.

Then a forensic archaeologist noticed metal fragments and realized that this was not a crime scene. The iron pieces around her were once an expensive coffin. Popular in the mid-1800s, iron coffins were airtight and slowed the rate of decay. This was why the body appeared so fresh.

The time bracket also helped to explain the woman’s “strange” clothing—a nightgown, cap, and knee socks. Her well-preserved skin revealed familiar scars and most likely the cause of death—smallpox.

The site used to be a church and graveyard used by an African-American community. Census records suggested that she was 26-year-old Martha Peterson. The most touching finding was how meticulously the woman had been prepared. Despite having a deadly, contagious disease, somebody had washed and dressed the body and then groomed her hair.

There remains the mystery of how an ordinary person ended up in one of these pricey, ornate coffins. It could have been to prevent the smallpox from spreading as the casket was airtight. However, researchers have not ruled out more mysterious reasons for her unusual burial.[2] 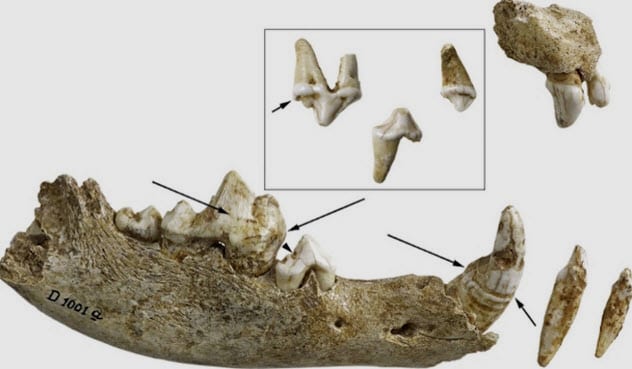 A touching story unfolded in 2018 when researchers had another look at old dog bones. First found in 1914, the canine rested in a grave with a man and woman. They all lived around 14,000 years ago in modern-day western Germany.

The new study found that the dog remains were not from one animal, as previously believed, but two. The youngest was a puppy that died at seven months old after suffering several long bouts with a terrible disease. Canine distemper still kills many dogs today, and this Paleolithic pet survived longer than it should have.

This suggested that ancient humans had a deep bond with the pup—feeding it and caring for symptoms like lethargy, vomiting, pneumonia, and even seizures. This attachment could be why it was eventually placed in a human tomb.

Apart from showing that Neolithic people valued animals as pets, not just working companions or a food source, the puppy brought two more firsts. It is the oldest domestic dog burial as well as the oldest grave holding both humans and canines.[3] 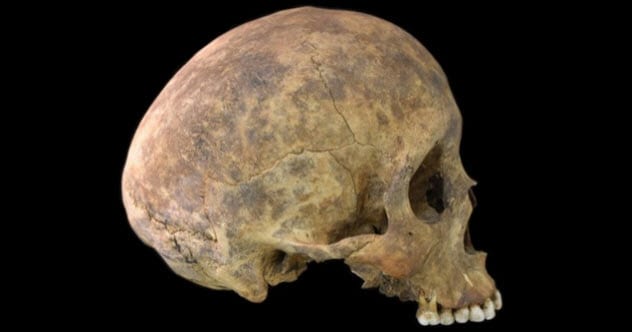 In 1954, archaeologist Samuel Lothrop reported horrific burials in Panama. Sacrifices, cannibalism, and other violent deaths were all there (AD 550–850). The report became a popular source to cite when writers felt the need to highlight how savage the natives once were.

In 2018, the Smithsonian Institute decided to review the evidence. Lothrop had sent 77 skeletons from the Playa Venado graveyard to them. The institute also had his records. The review found no evidence of the violence Lothrop thought occurred to most individuals at the time of their deaths. On the contrary, the culture interred their dead with ritual and care.

Lothrop is not the bad guy here. During his lifetime, the placement of bones was easily misinterpreted. He thought an open jaw meant a live burial. In reality, it was muscles relaxing after death. He also believed tales of 16th-century Spanish conquistadors who purposely made South Americans look violent as an excuse to conquer them.[4]

Lothrop’s training rescued the truth. His remarkably detailed records allowed the Smithsonian to finally correct the entrenched misconception of a bloodthirsty ancient Panama. In 2017, treasure hunters in Switzerland took metal detectors and swept the ground near Lake Biel. They unearthed something so strange that it made the experts skeptical. Archaeologists had never seen anything like it—an almost life-size hand forged from bronze with a cuff of gold. Tests dismissed the hoax angle.

The artifact was 3,500 years old, making it Europe’s oldest metal human body part. Its purpose remains a mystery. One clue is the hollow interior, big enough to insert a pole or part of a real hand. The latter opened the suggestion that it was a ritualistic prosthetic.

Archaeologists visited the site again and struck it lucky. Not only did the team recover a bronze finger but also a curious grave. Inside was a man identified as the probable owner of the hand when matching gold flakes were found with him.[5]

His burial had also taken place, apparently on purpose, on top of an even more ancient stone structure. The location and the hand suggested that the individual once enjoyed a powerful position in life. 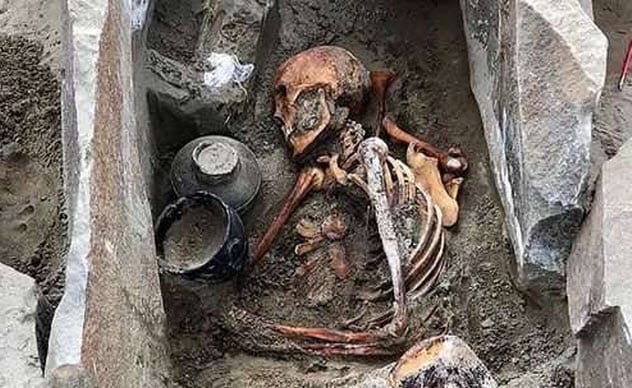 The Sayano-Shushenskaya Dam in Russia hit a low point in 2018. Researchers took the opportunity to investigate exposed areas that had been underwater since the 1980s.

It was not long before they stumbled upon an ancient stone tomb. Inside was the naturally mummified body of a young girl. She died 2,000 years ago, and the grave goods indicated that the girl had probably been part of her group’s upper crust in life.

Included in the burial were a beaded belt, what appeared to be a silk garment, ceramic tools, a mirror in a box, a potted meal, and a bag of nuts. The items and the vase with the food, in particular, suggested that she was a nomadic Hun.

It is not fully understood what process mummified the body, but that is not her greatest quirk. The mummy still has some skin and soft tissue despite 30 years of submersion.[6] 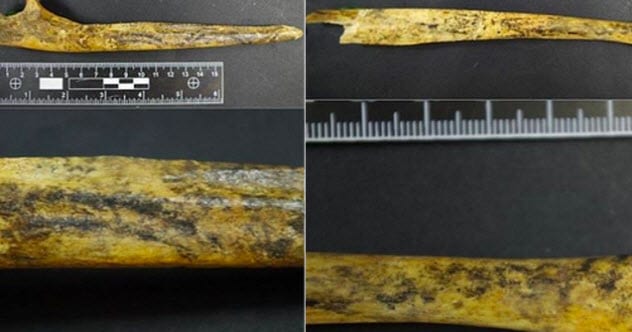 Around 4,500 years ago, a young woman died in modern-day Ukraine. Before being placed inside a burial mound, somebody decorated her bones. With great care, black dye was used to mark the woman’s remains.

When archaeologists found the burial mound a few years ago, the decorations were treated as possible animal interference even though they were regular patterns. In 2018, chemical analysis revealed that the lines were made by a human hand applying a substance similar to wood tar.[7]

The study also showed an interesting funerary habit. For some reason, the painter waited until decomposition was done and then decorated the bone surface directly. The case is unique in archaeology. Nobody knows who she was or what prompted her nomadic society to perform another rite so long after death. The meaning of the symbols, if that is what they are, is an added mystery. La Necropoli dei Bambini (“Cemetery of the Babies”) is a disturbing place. Even archaeologists call it unusual. Filled with only infants and the incomplete remains of puppies, ravens, and toads, another weird case was found in 2018.

The child is the oldest found so far in the fifth-century Italian burial ground. He or she died at 10 years old. Clenched between the jaws was a rock. Previous cases in Italy suggest that the living believed this would stop the dead from rising.

The child earned the unfortunate local nickname of the “Vampire of Lugnano.” Far removed from being anything supernatural, the youngster was likely a victim of a deadly outbreak. Evidence suggests that most of the babies were buried within a short time and many carried the deadliest malaria parasite, Plasmodium falciparum.[8]

The 10-year-old reflects the fear of a community ravaged by an epidemic. There is no place like La Necropoli dei Bambini. Apart from being incredibly tragic, the ritually used animals could provide research fodder for years—like why most of the puppies were missing their heads or jaws. When Mount Vesuvius blew in AD 79, the volcano became famous for destroying the Roman city of Pompeii. Even though the neighboring settlement of Herculaneum was also hit, Pompeii’s popularity usually takes the media spotlight.

Most people know that the majority of Pompeii citizens died of injuries or suffocation related to the ash that “froze” their bodies into the iconic gray statues. Though their demise was no carnival, a recent study found that the people at Herculaneum died in a different but still horrific manner.[9]

On the fateful day, many sought refuge in a boathouse near the ocean. Their remains bore the signature signs of having been burned alive when Vesuvius released pyroclastic flows—superheated volcanic matter moving at lightning speed.

The actual cause of death was when the heat vaporized the victims’ body fluids. Red and black marks on the bones also suggested that people’s blood boiled away and left behind an iron residue. Some skulls had burst, likely from the brain suffering the same treatment. At least, death was instantaneous.

1 Bargaining Chip To Own Antarctica Nobody owns Antarctica—yet. Seven countries have staked a claim: Chile, France, the UK, Argentina, Australia, New Zealand, and Norway. Signed in 1959, the Antarctic Treaty System put the seven claims on ice and forbade any more countries from making new bids. It also proclaimed Antarctica a natural reserve, the main reason why the vast region remains so pristine.

However, that could change when the treaty comes up for review in 2048 and the seven countries could get a chance to own the continent. Chile might have an advantage thanks to human remains found in 1985.

The unusual skull turned up on Yamana Beach in Antarctica’s South Shetland Islands. It belonged to a woman native to Chile, but for mysterious reasons, she ended up dead in Antarctica between 1819 and 1825.[10]

This makes her the “first” person ever found there. Those against turning Antarctica into any country’s territory fear that she could be used to help Chile’s claim to ancestral rights. With good reason. One key part of the treaty’s review concerns the lifting of all bans on mining and resource extraction.