About 100 years ago, our galaxy was thought to encompass the entire universe. A century later, we’re observing things more than 13 billion light-years away, nearing the moment of creation.

These following 10 discoveries come from the actual edge of existence. They show us just how much the early universe was a surprisingly happenin’ and amazing place.

10 A Galaxy From The Beginning Of Time 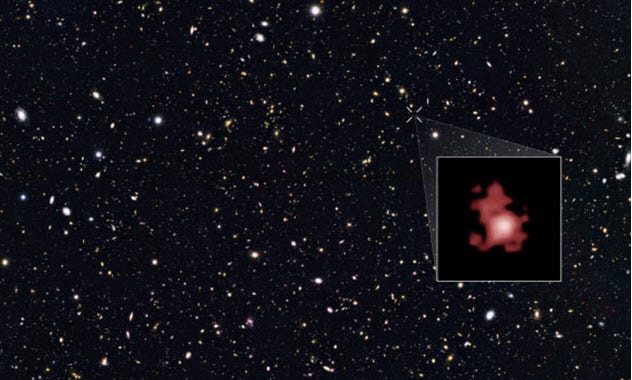 The beloved Hubble Telescope stole an image from the birth of the universe, just 400 million years after the big bang. It captured the bright infant galaxy GN-z11 as it was a whopping 13.4 billion years ago.

At this point, the universe was only 3 percent of its current age and just a few hundred million years had passed since the first stars burst into life.[1]

GN-z11 probably grew into a proper beast. But here it only had 1 percent of the Milky Way’s mass in stars packed into a structure 25 times smaller than our galaxy. 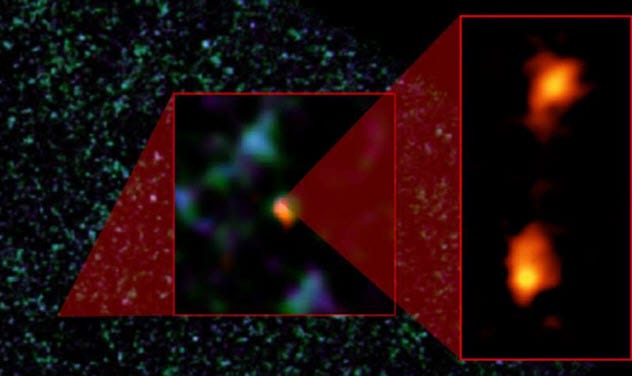 Superluminous starburst galaxies shine stupendously with the birth of countless massive blue stars. They’re a rarity, but astronomers just spotted two of them colliding right on the big bang’s doorstep 12.7 billion years ago.

The swirling, bi-galactic entity is about 12.8 billion light-years away and known as ADFS-27. Each of its components is a dozen times larger than the 100,000 light-year-wide Milky Way.

Separated by 30,000 light-years, the two bodies are zooming at hundreds of kilometers per second relative to one another, setting up a crazier merger than anything yet witnessed.

The resulting elliptical mega-monster will probably be substantial enough to establish an entire galaxy cluster, snagging hundreds of thousands of other galaxies with its gravitational might.[2]


8 The Most Ancient Black Holes 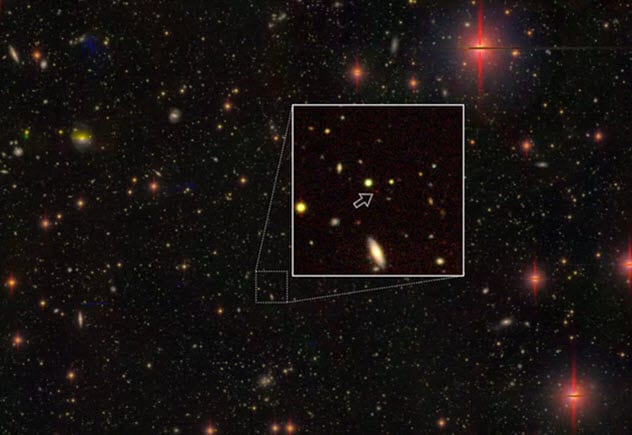 Scientists scanning the early universe for quasars have just come up with a bunch, confirming 83 new black holes to supplement the 17 known to exist during this era.

These things are millions or billions of times more massive than our Sun. They were already thriving when the universe was less than 10 percent of its current age, just 800 million years after the big bang.

Researchers calculated that if you took these known quasars and parceled the universe into cubes, each a billion light-years per side, every cube would get one black hole, accounting for one black hole per “giga-light-year.”[3] 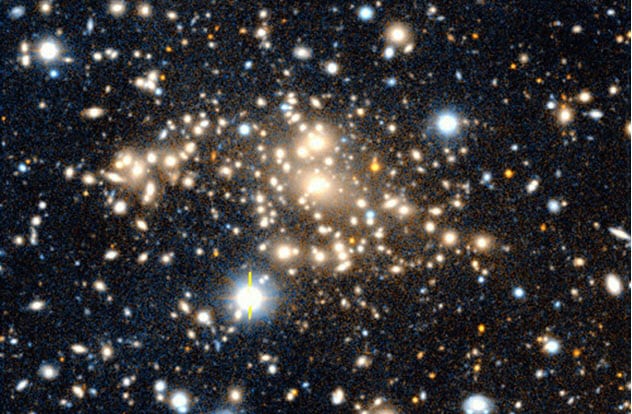 The gargantuan galaxies of the big bang era are saturated with dust and debris and can emit the radiation of a trillion Suns. But they’re invisible because their light is absorbed by all that dust and reemitted at submillimeter wavelengths.

With abundant materials and few bodies to gobble them up, researchers pinpointed a structure that was exceptionally fat and dusty. The galaxy possesses a whopping gas mass of 330 billion solar masses. Comparatively, the Milky Way only has a gas mass of five billion solar masses because most of its mass is already locked away in stars.[4]


6 Whirlpool Galaxies At The Edge Of Space 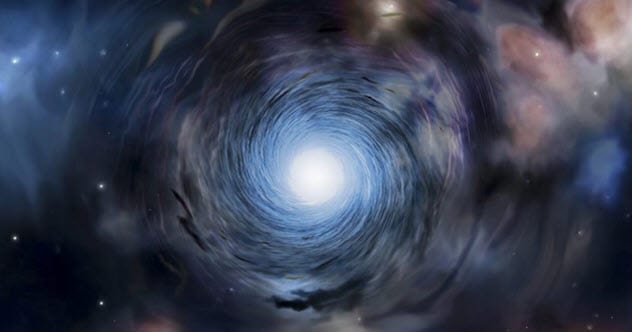 The Atacama Large Millimeter/submillimeter Array (ALMA) is so finely tuned that it peered through 94 percent of the universe and detected the rotation of two fetal galaxies.

They’re some of the oldest galaxies on record and five times smaller than the Milky Way, according to the ALMA snapshot that captured them as they were 800 million years after the big bang. Even though the view is nearly 13 billion years old, its color gradients indicate the motion of the gas and the galaxies’ rotation.[5]

Like modern galaxies, they swirl like whirlpools, birthing from that chaos thousands of stars per year. They’re surprisingly ordered, say researchers who marvel at how quickly the universe organized its resources and propagated itself.

A fortuitously positioned, six-billion-light-year-distant galaxy acted as a cosmic magnifying lens, redirecting and amplifying some of the oldest photons in existence.

Those photons were expelled by quasar J0439+1634, which (thanks to the lens effect) appears 50 times brighter and lights up the early cosmos with the apparent light of 600 trillion Suns.

The quasar-powering black hole contains the mass of 700 million Suns and dates to 12.8 billion years ago. During this Epoch of Reionization, the first light sources pierced the opaque hydrogen and helium fog that cloaked the young universe.[6] 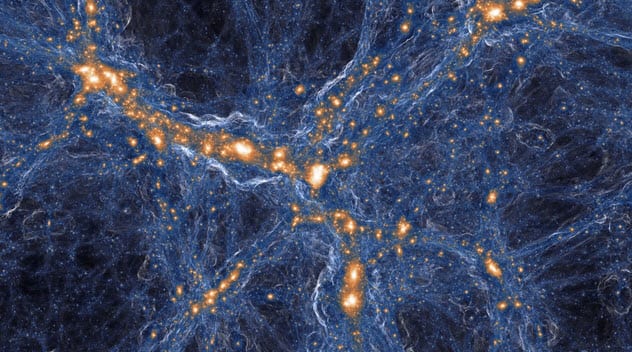 The universe is a big witch’s pot of chemicals, and there’s generally a lot of mixing going on. So, heavy elements are seemingly everywhere, but scientists have identified a pristine relic fossil gas cloud.

It’s only the third relic gas cloud discovered so far discovered, and it managed to remain uncontaminated even 1.5 billion years after the big bang. It’s also supremely wispy, indicative of its status as a primeval puff from the earliest days of existence.[7]

Like a fluffy, cosmic 3 Musketeers bar, it has a proportion of heavy elements less than 1/10,000th that of the Sun. That must mean that it’s a leftover from a far-gone era in which stars hadn’t yet pumped out heavy elements like metals.

3 An Unexpected Twist On A Star With Two Planets 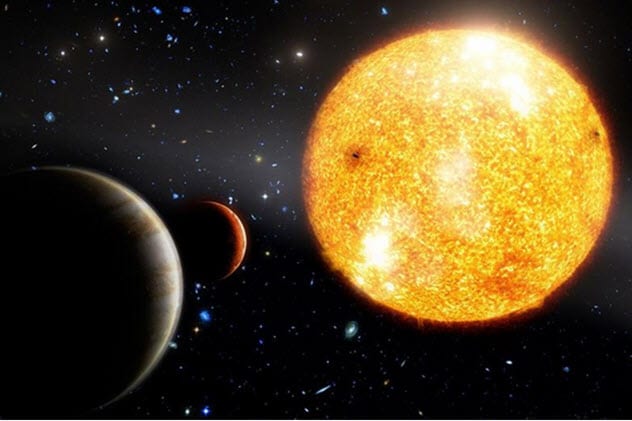 Astronomers found a souvenir from the beginning of time that was only 375 light-years away. HIP 11952 is a star full of hydrogen and helium but very much lacking in metals. Such a star could only exist at the dawn of the universe.

With an age of around 12.8 billion years, it formed when our Milky Way “was still a baby.” In 2012, scientists were shocked to discover that the star was harboring something even more amazing—two incredibly ancient planets.

Scientists are debating the origin of planets during the days of the first stars as planets may not have been able to form with the lack of heavy elements. They thought that the discovery of HIP 11952 was painting a clearer picture of when the first planets were finally able to form.

But then the story took an unexpected twist. Using the new high-resolution spectrograph HARPS-N at the Galileo National Telescope in Spain, astrophysicists took more measurements of HIP 11952 over a 150-day period from August 2012 to January 2013.

Instead of detecting two giant planets in the system, they found . . . nothing. Ultimately, they concluded that the previous discoveries of two ancient planets had been incorrect and occurred due to instrument errors.[8] 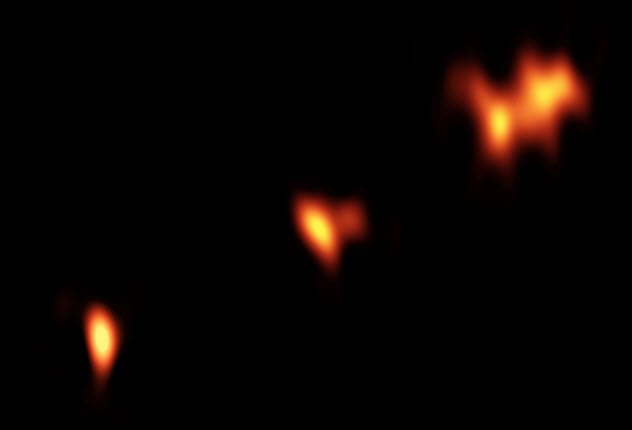 P352-15 is the early universe’s brightest radio quasar by a factor of 10. It looks like three orange splotches, but those splotches reveal a 5,000-light-year-wide galaxy as it appeared 13 billion years ago. Though the universe was less than a billion years old, P352-15 is already a quasar with a supermassive black hole vomiting radiation at relativistic speeds.

That spewing, supermassive monster probably resides in one of the splotches on either side. The two blots opposing it are actually huge, lethal jets being ejected at near-light-speeds from the maw of a feasting black hole.[9]

1 A Galaxy Full Of Old Stars

Astronomers have recently detected the faint wisp of ionized oxygen across 13.3 billion light-years of space.

It belongs to galaxy MACS1149-JD1, and it’s extremely red because the light has been stretched during an epic journey that began just 500 million years after the big bang. The existence of oxygen means that MACS1149-JD1’s stars had been shining for a long time—long enough to have produced said oxygen.

Not only that, but MACS1149-JD1 is already full of mature stars. Astronomers say these stars were shining just 250 million years after the big bang, a period not too distant from the birth of the very first stars.[10]

Ivan writes about cool things for the Internet. You can contact him at [email protected].