Lakes are liminal spaces. The world divides between what is above and what is below. They can also be spooky places where waves behave oddly, and it is easy to imagine all manner of things concealed in the gloomy depths below.

While lakes may scare some people away, others actively go to them to search out the mysteries they hide. Here are 10 discoveries that might make you want to go lake diving. 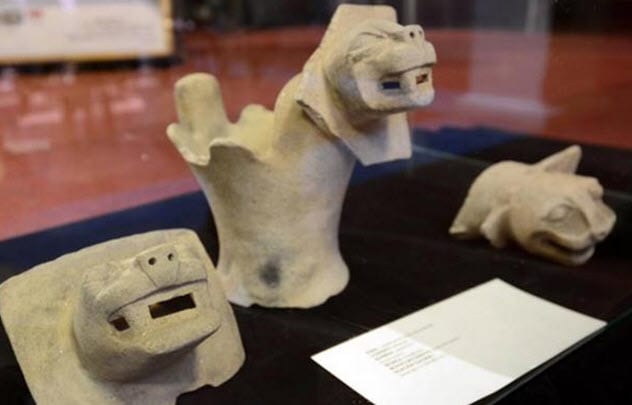 Lake Titicaca is both the largest freshwater lake in South America and the highest navigable lake in the world. It has long been a focus for human interest, with many ancient cultures living beside it and including it in their mythologies.

For the Incas, the god Con Tiqui Viracocha rose from the waters of Lake Titicaca and brought the first humans with him. An island in the middle of the lake was also the supposed birthplace of the founder of the Incan royal line. Ruins of the Inca can be found all around the lake, but something older lurks within.

In 2013, startlingly beautiful golden objects were brought to the surface along with ceramics and bones given to the Tiwanaku gods. One of the most interesting discoveries is an object showing an animal that is a hybrid of a llama and a puma. 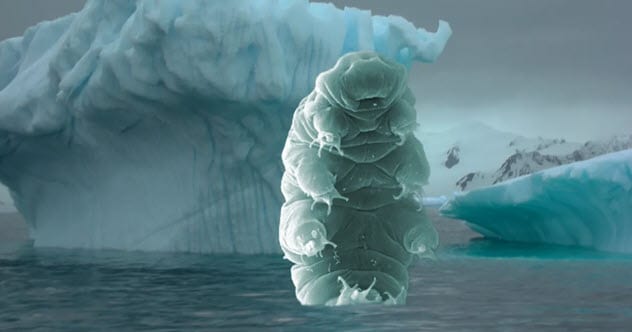 Not all lakes are in pretty locations. Some are almost impossible to find without the latest technologies. Lake Mercer in Antarctica is buried under 1 kilometer (0.6 mi) of ice. It had not been touched by humans until 2018 when a group of researchers managed to bore a small hole down to the waters crushed under a glacier. What they discovered shocked the scientists—a tardigrade and the bodies of tiny creatures like crustaceans.

Tardigrades are famous for being able to survive intense pressures, a huge range of temperatures, and even the vacuum of outer space. But the one brought up from Lake Mercer was very much dead, an ex-tardigrade.

What was interesting about the remains found at the bottom of the lake was that they resembled species known to live on dry land. It seems that the creatures were trapped when climactic conditions changed. Researchers are still investigating the lake to see if any life-forms have managed to thrive in the utter blackness of conditions under the ice.[2] 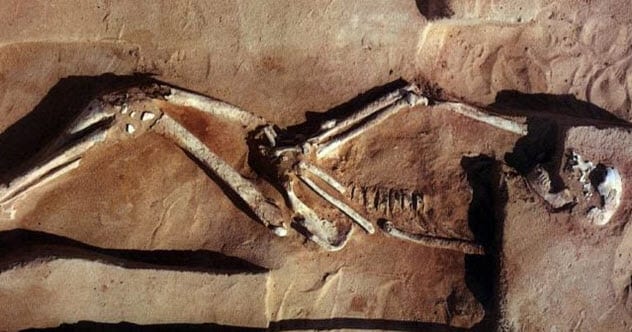 While climate change created and preserved Lake Mercer, it spelled the doom of Lake Mungo in Australia. As the region became more arid, it caused the lake to shrink and become more alkaline before finally drying up entirely several thousand years ago.

In the dried mud of the lake bed, footprints from 20,000 years ago have been preserved. One group shows children and adolescents moving together. Another suggests hunters moving quickly—including a one-legged man who hopped quickly after the others.

Jim Bowler discovered two sets of human remains in Lake Mungo that date from around 40,000 years ago. Inventively called Mungo Man and Mungo Woman, they prove the length of time that indigenous Australians have lived in the country. Mungo Woman is also the earliest-recorded cremation found anywhere in the world.[3]

The remains of Mungo Man and Woman were taken from their site of discovery for further study. But they have since been returned to representatives of the indigenous groups who claim them as ancestors. 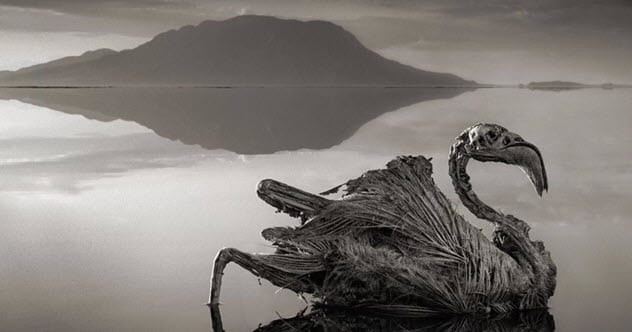 As Lake Mungo dried, it became more alkaline. Today, Lake Natron in Tanzania has also become highly alkaline, and the effects of this are intriguing and beautiful in a macabre way.

Since water flows into Lake Natron but only escapes by evaporation, salts build up in the water. The extreme conditions make it a troubling location in which to live. It is home to only a single species of fish, some algae, and flamingos that feed on the algae. Other creatures that try to make their home by the lake suffer a terrible fate—they are turned to stone.

At least that is what it looks like. Dead animals that fall into the water are fantastically preserved by the salts which leach into their flesh. If they are washed up on the shore, then the drying water coats them in another layer of salt that seems to turn their bodies to white statues. Photographer Nick Brandt spent several weeks collecting and capturing the images of the animals that Lake Natron itself had ensnared.[4] 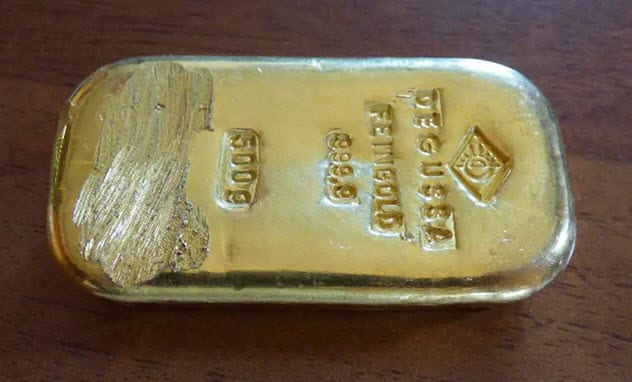 In 2015, a 16-year-old girl on holiday went for a swim in Lake Konig. About 1.8 meters (6 ft) beneath the surface, she noticed something glittering and dived to pick it up.

In this case, all that glitters was gold. She came up with a 500-gram (17.6 oz) bar of pure gold worth an estimated €16,000. As the lake was only 3 kilometers (1.9 mi) from Hitler’s former holiday home, rumors immediately spread of Nazi treasure.

Six months after she handed the gold to police to identify its owner, the police returned the gold to the girl. Under German law, if the original owner does not claim a lost object within six months, then its finder becomes its keeper.

Research had proved that the gold bar was not Nazi in origin. But whoever placed it in the lake had gone to the trouble of defacing the number on the bar, which would have made tracing its owner easier. How the gold bar came to be lying at the bottom of the lake in the first place will likely never be known.[5]

5 A Forest And Cart 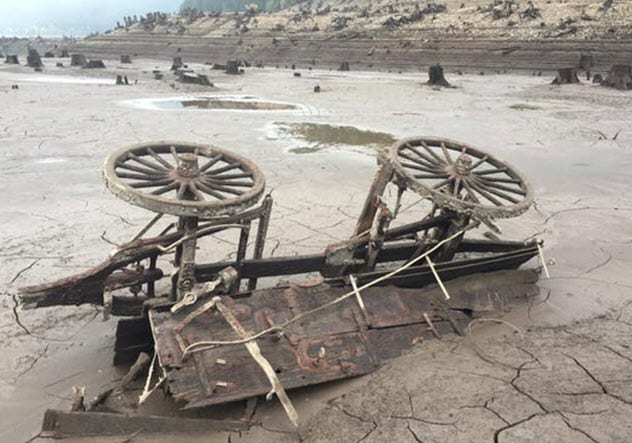 Detroit Lake was only formed in 1953 when a dam was built. The reservoir created by this has become a home to fish and other creatures but is directly on top of Old Detroit. Each year, as the water level falls and the banks of the lake are exposed, the stumps of trees cut down for use in the construction of the dam can be seen. However, the ghostly remains of the forest are not all that lurk in Detroit Lake.

In recent years, the lake has fallen to unprecedented low levels and hints of Old Detroit have emerged from their watery graves. In 2015, when the lake fell 44 meters (143 ft), a fully preserved 19th-century wagon was found sticking out of the mud.[6]

Besides other remains of the town, which used to be home to 200 people, a strange octagonal pit was discovered. No one could say what exactly it was used for by the time that the lake refilled. Future archaeologists will just have to wait for another dry summer.

Lake Van in Turkey is home to much archaeology—and possibly a monster according to local belief. But in 2017, it was announced that a castle had been found. It had been submerged for hundreds or thousands of years as the water level of the lake rose.

It was immediately and confidently stated in several articles that the cut stone walls of the building belonged to the Urartu civilization who lived in the area 3,000 years ago. One stone featured a carving of a lion, which supported the attribution of the site to the Urartu. But some took issue with the announcement.

The team of divers who discovered the site did not include any archaeologists, but they never claimed to have been experts. It was the press that made the initial jump to their having discovered a 3,000-year-old castle.[7]

Also, the site had been known earlier. Others who had examined it felt that the site was probably only hundreds, rather than thousands, of years old. It is possible, though, that the walls discovered by the divers had been built by people who robbed stone from an ancient Urartu building. All that anyone can agree on conclusively is that more research is needed. 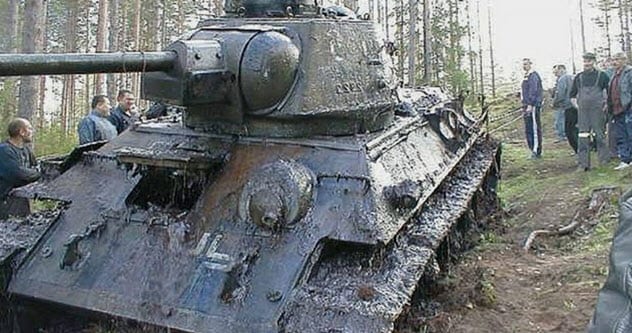 The Nazi invasion of the Soviet Union in World War II saw huge numbers of tanks sweeping across Eastern Europe. Belarus suffered greatly from the battles that occurred there, and many places still bear the scars of the titanic struggle.

Among the human remains and craters that have been found by archaeologists, however, are a surprising number of startlingly well-preserved tanks lurking in the lakes, bogs, and mires. One family, the Yakushevs, have become experts in finding them and freeing them from the mud.[8]

Despite being buried and sunk for decades, many of the tanks found by the Yakushevs have been restored to working order. In many cases, it is the anaerobic conditions in the mud which have saved the tanks as no oxygen can get at them to rust them to nothing.

Much can be learned about conditions on the battlefront from the tanks that are found. One Soviet T-34 was found painted in Nazi colors after having been captured by them and sent into battle against its Soviet builders. 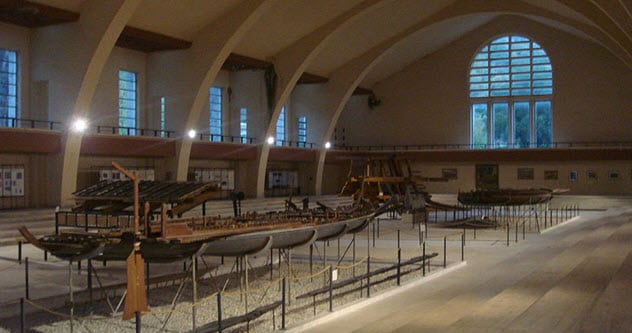 Lake Nemi in Italy is a very small lake that was hiding a very large secret. Local fishermen had always been aware that there were sunken ships in the water, and they often dived down to recover artifacts that could be sold to tourists.

Early attempts at underwater archaeology failed. But in 1927, Mussolini ordered that the lake be drained and the ships fully exposed. What was found were the remains of two vessels, each around 76 meters (250 ft) long and 21 meters (70 ft) wide. If that seems insanely large, it will not be surprising that they were built by the somewhat unhinged emperor Caligula.

The ships were magnificent floating palaces. The hulls were coated with lead and the decks with marble, mosaics, and gilding. Exactly why Caligula had these ships built and placed on such a small lake will likely never be known.[9]

The two ships were destroyed in a fire during World War II. But archaeologists are still searching Lake Nemi to see if there are any other remains waiting to be found. 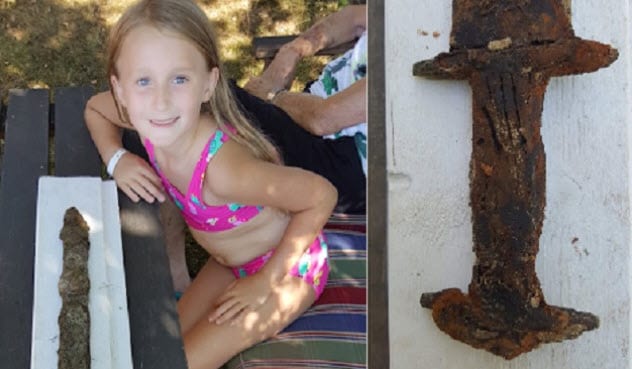 Although Monty Python and the Holy Grail tells us that “strange women lyin’ in ponds distributin’ swords is no basis for a system of government,” there were those who suggested that an eight-year-old Swedish-American girl had proved herself a real queen when she pulled an ancient sword from a lake.

Saga Vanecek was skipping stones across Lake Vidostern when she reached to pull what she thought was a stick from the mud. Instead, she found a handle and raised the sword while saying, “Daddy, I’ve found a sword.”

It was not just any sword. At 1,500 years old, it predated the Vikings. The 85-centimeter-long (33 in) weapon is now being restored. Archaeologists who searched the site for more artifacts recovered a brooch but do not yet know how the items ended up in the lake. More work is underway to see what else is waiting to be found.[10]