The United Kingdom really does have its unusual places. With such a long history of language developing over time, the country retains some of the oddest named places you may have ever heard of. Some of these can be quite hilarious. Bitches, sluts, muffs and breaking wind are just some of our features today. If you didn’t check out our first list on this topic, it can be found here: 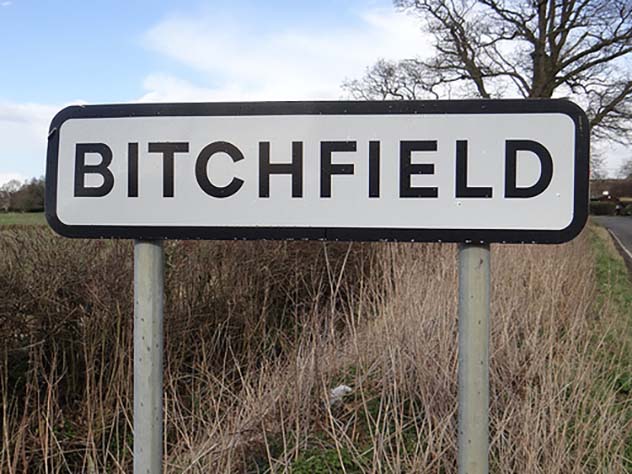 Bitchfield is an English village located in the county of Lincolnshire, on the east coast of the country. It is situated in the South Kestevan district and is referred to as a ‘shrunken’ medieval village, referring to the fact it was once likely much larger than it now is. The village was recorded in the famous Domesday Book of 1086 and is listed as ‘Billesfelt’. The village is actually split into two distinct groups of buildings located in Bitchfield and Lower Bitchfield. The two groups of buildings are connected by Dark Lane and the village includes a parish church with Norman architecture. The village is largely unremarkable besides it’s tabloid coverage due to its humorous name – however this comes from a county with such spectacular names like Tongue End, Pode Hole, Cuckoo Bridge and Whaplode. Yes… these are all real places.[1] 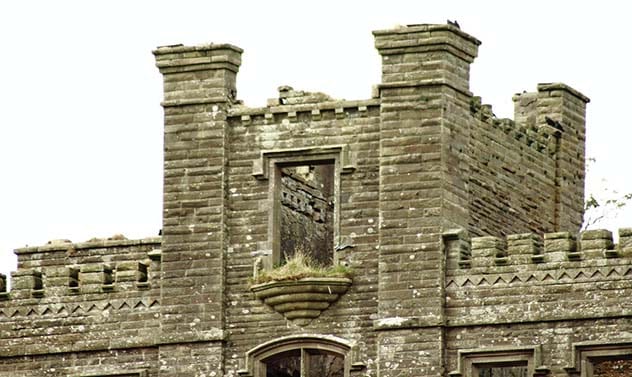 The townland of Stranagalwilly is situated in Northern Ireland, in the parish of County Tyrone. The area is known as a townland, rather than a town, as it refers to the area of land rather than the place. The system of townlands come from Gaelic tradition, in which it is a designated area of approximately 325 acres. Other area sizes in Gaelic include an acre, a Gneeve, a Ballyboe or Ballybetagh. These system measurements sometimes are used as a prefix to villages and towns in Ireland and Northern Ireland, such as Ballyshannon or Ballybogey. In 1961, the townland of Stranagalwilly was the site of a discovery of four cist cemeteries dating back to the Bronze Age, with unburnt burials discovered alongside cremated remains. The discovery of the fourth cemetery happened when a local farmer was harvesting potatoes, with some of the remains indicating that the burial was of a leather worker.[2] 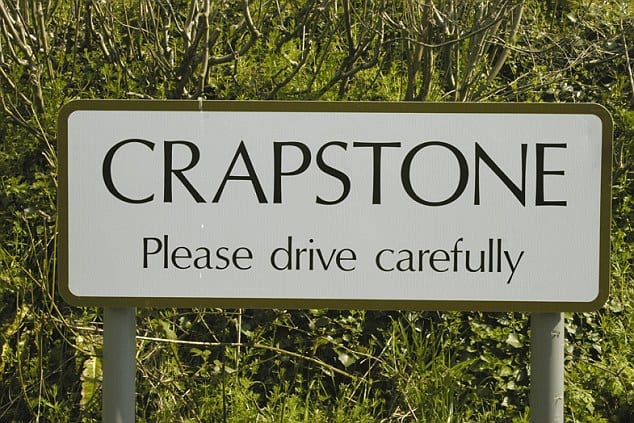 Crapstone is an village located in the ceremonial county of Devon, on the South of England. The village is right on the edge of Dartmoor, the notorious haunt of many urban myths and legends. Most notably are the Dartmoor Hounds, which are said to be large black spectral hounds that haunt the moors. These hounds were the inspiration for The Hound of the Baskervilles by Sir Arthur Conan Doyle. The name Crapstone is reportedly derived from a family name which have strong roots in the town and helped develop the local church and a golf course. The town was featured on a 2007 British advert starring Vinnie Jones. However, there was a strong backlash from residents of Crapstone who said the advert used footage of a different village and the advert had used the unusual name of the village as the (excuse the pun) butt of their joke. Very much an oxymoron, the town is said to be extremely pretty despite it’s rather crude title.[3] 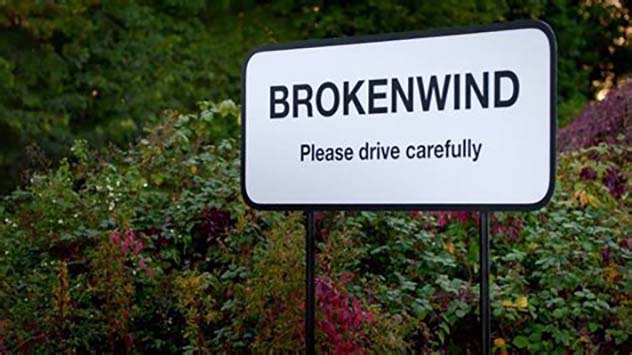 Now this one is a favourite of the ‘funniest’ or ‘rudest’ named places in the UK; The hamlet of Brokenwind, located in Newmachar in the county of Aberdeenshire. The name of Brokenwind, listed as ‘Broken Wynd’ from nineteenth-century records, takes its name from the layout of the area. A wynd is a snaking path between two larger roads and obviously this one must have been broken. The nearest village, Newmachar, was the location of one of many top secret British resistance patrols during the Second World War, put together in secret by Winston Churchill. The village had an operational base which housed the unit, who the in the aftermath of a Nazi Invasion, would have launched a guerrilla offensive preventing key lines of travel and communication. It is startling to ponder on the fact the UK could have become so desperate in its attempt to thwart Nazi Germany, and having to wage such desperation warfare is unthinkable.[4] 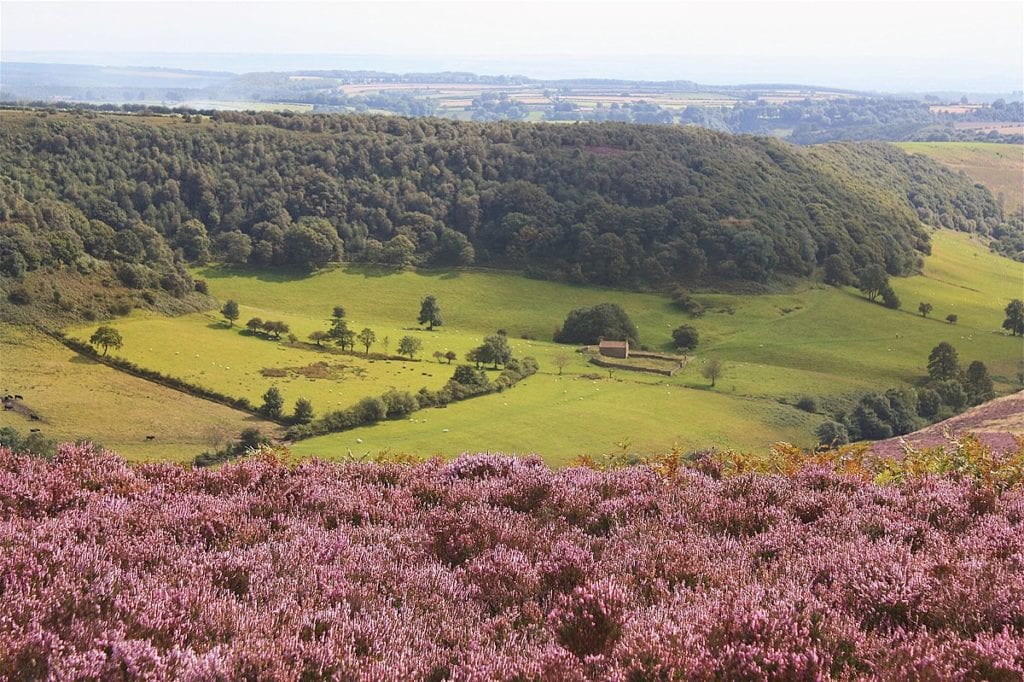 The Hole of Horcrum is a part of the Levisham Beck valley in the moors of North York. The ‘hole’ is approximately 400 feet deep and features a horse-shoe like appearance, with high level trees surrounding the stunning valley. The Hole of Horcrum is described as ‘spectacular’ and a ‘must-do walk on the North York moors’ and is certainly the most visually magnificent place on this list. The unusual name comes from an urban myth about an Anglo-Saxon chief named Wade. According to legend, Wade was turned into a giant and when arguing with his wife, he picked up the turf and threw it at her – thus creating the hole of Horcrum. It’s unclear where ‘Horcrum’ comes from, but what is clear is that the bowl was formed due to a process called spring-sapping. Spring-sapping occurs when water welled up at the bottom of a hillside undermines the upper slopes, creating a small valley. Over time, this becomes deeper and wider.[5] 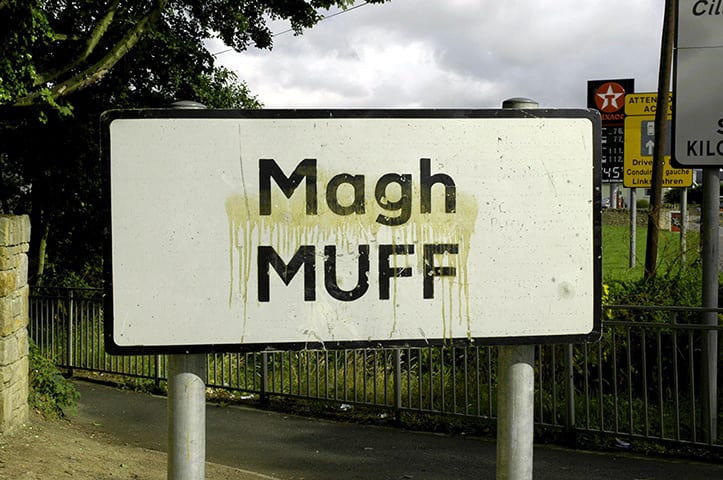 Now the village of Muff is not strictly found in the United Kingdom. Sitting on the Irish border between Northern Ireland and Ireland, the village is actually part of County Donegal, Ireland. However it houses an influx of Northern Ireland residents who have crossed the border, as this is set to become a contentious issue in the current Brexit climate. However we have included it in this list due to its proximity to Northern Ireland and its ties with the area. The village name is Gaelic and means a ‘plain’. The word muff – in some British social circles – may be used as a slang word for the female genitalia. The village of Muff every August celebrates the Muff Festival, which includes a parade and street parties. It also has its own Mayor of Muff who is elected annually. Rather amusingly to some, the village has its own recreational diving club… named the Muff Diving Club. You couldn’t make this stuff up.[6] 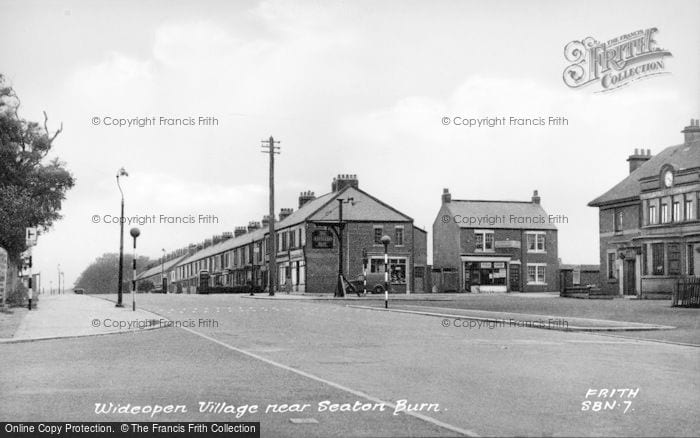 The village of Wide Open is situated in the northern part of the county of Tyne and Wear, in the North of England. The nearest city to Wide Open is Newcastle Upon Tyne. The village is very typical of a northern pit village, with roots in coal mining, as the Wideopen Colliery opened here in 1825. The colliery ceased operations in the twentieth-century and the town has declined since. The village is probably best known for the Grade-II listed Sacred Heart RC Church which is found just to the south, featuring multiple stained-glass windows. The village has been named in tabloids as one of humorous note, however it is commonly misspelled as ‘Wide Open’ (we have done so deliberately) when the correct local spelling is Wideopen. This mis-spelling is said to cause postal delivery issues to the area.[7] 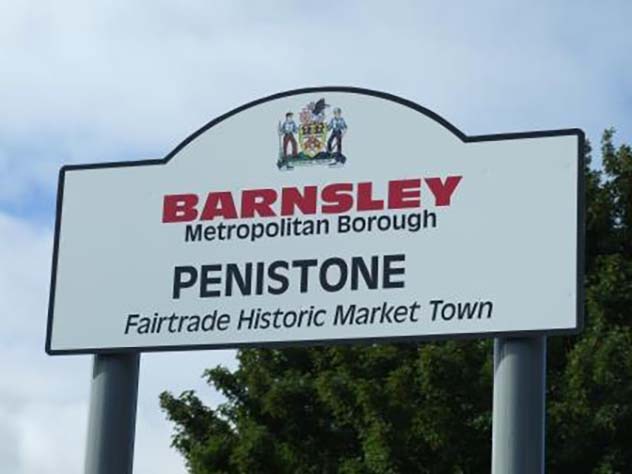 Penistone is probably the largest place of this list, as it is a large town in the county of South Yorkshire. Penistone is a very typical Yorkshire town, with sweeping moors and rural countryside surrounding its picturesque town. Penistone is another place which is named in the Domesday Book of 1086, where it is listed slightly differently as ‘Penstone’. The name is said to be derived from the word penn in Old Welsh, meaning ‘height or hill’ as the town is situated on top of a high ridge. The town was said to be flattened during the Norman Conquest of England during the Harrying of the North, but has obviously remained a constant place in the area throughout the centuries. The town is thriving and despite its name – which is often used in numerous town names lists like this one – the residents of Penistone have an active community with a market, sports and recreational activities and an annual agricultural show just some of the on goings in the area.[8] 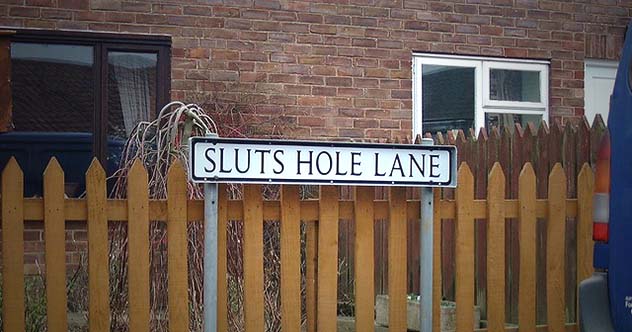 This is probably the smallest place on our list today but perhaps the most shocking and crudely named. Sluts Hole Lane, found near Attleborough in Norfolk, England, is a road that links Silver Street and Bunwell Road with the nearest village being a place called Besthorpe. According to reports, the street name is a typo error from the nineteenth century, when Victorian census takers are said to have made a mistake transcribing ‘Slutch Hole Lane’. Residents of Besthorpe have tried to restore the original name but this has been prevented, presumably due to the attraction the name brings to the area. ‘Slutch’ would have been the original name due to the muddy and wet surroundings of the area, as this is said come from the Dutch word for ‘sluice’ – used in draining fens. The closest major city to Sluts Hole Lane is Norwich, approximately 10 miles north-east of the lane. The lane is often found on eccentric and unusual place names in the UK and it’s not difficult to understand why. P.S.: I advise against doing a web search on this place name.[9] 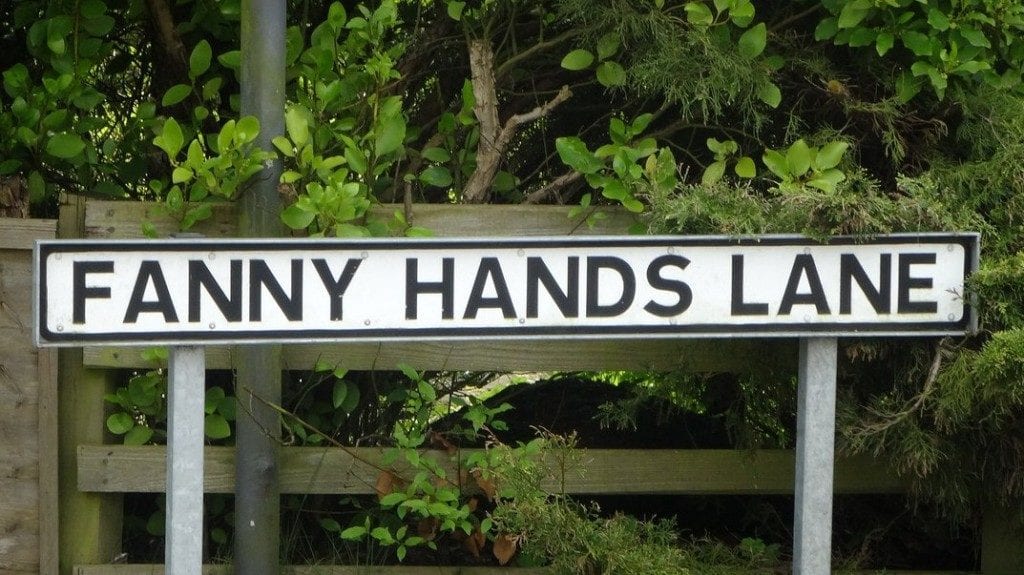 Fanny Hands Lane is a street which can be found in Lincolnshire, near a town called Market Rasen. The lane has been featured in newspapers as residents have seen their house value reportedly be around £80,000 less than those of streets around them. The term in the U.S. is used to describe someone’s bottom, in the U.K. it is a slang word for the female genitalia, or sometimes a name for a girl. Whichever way you use the word, it is certainly an unusual name to have as the street you live on. The town of Market Rasen was featured in the 1086 Domesday Book, deriving from an old English word meaning ‘plank’ – this is thought to refer to a plank over a river being used as a bridge.[10]

For more lists like this, see Top 10 Unfortunate Placenames, and 10 Places With Morbid Names.